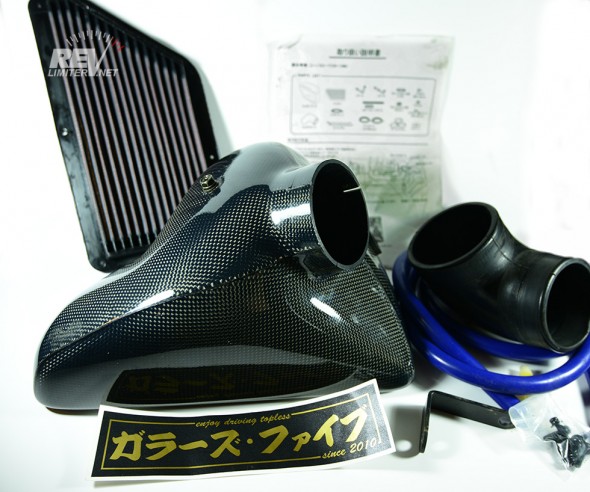 Isn’t it a beauty? All carbony and shiny? That, my friends, is the extremely-rare D-Technique intake. It popped up on the MazdaRoadster.net Classifieds and I jumped on it. I’d wanted to change out Bucky’s Monsterflow intake for a while, but hadn’t found just the right one.

This is the right one.

George at Garage5 had this piece of sale. He makes some really lovely Miata interior parts. Go check out his site! 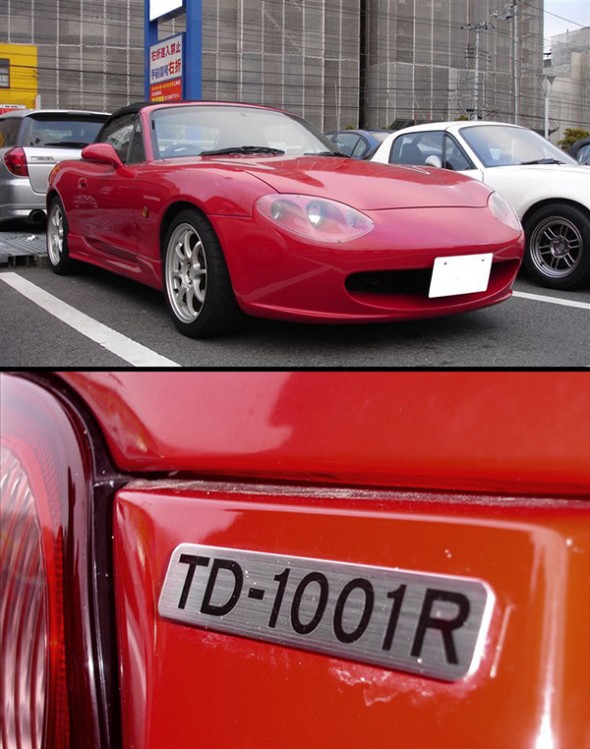 A bit of background on D-Technique. They’re a small tuning shop in Japan. A few years back, they created the above car, the TD-1001R. That Roadster was their vision of what an NB M2-1001 might look like. I remember seeing pix of this car for the first time and just being stunned by the beautiful simplicity. That bumper and headlights… pure muse material.

D-Technique created a few support parts for their 1001R model including a snazzy carpet console, a trick lower center console piece to hold the power window switch, an intake and exhaust, and a few other items. All of these items were lovely and I’m pretty sure most of them are discontinued as of this writing. 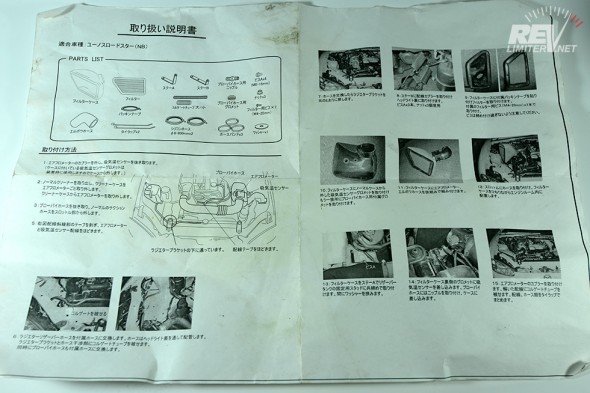 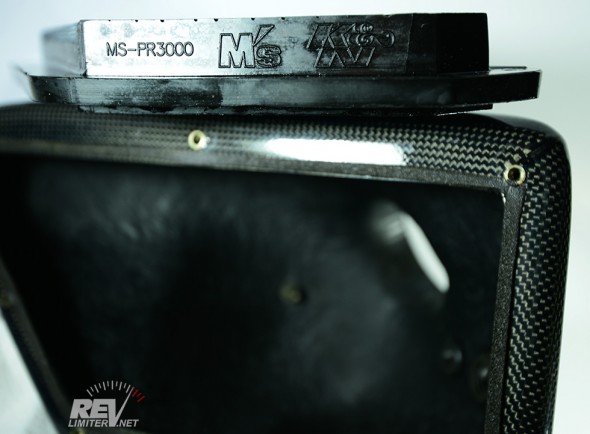 The instructions, while not incredible helpful, were an unexpected surprise. I always love seeing this sort of thing.

The filter is quite interesting. It’s an M’s K&N. I didn’t really know what that was until a few days ago. M’s is another tuning shop in Japan. They seem to do mostly Skyline stuff. I’m not sure what other intakes use this filter, but it’s not a standard K&N item that you can just order. Chances are pretty good that there’s not too many others in this whole country. 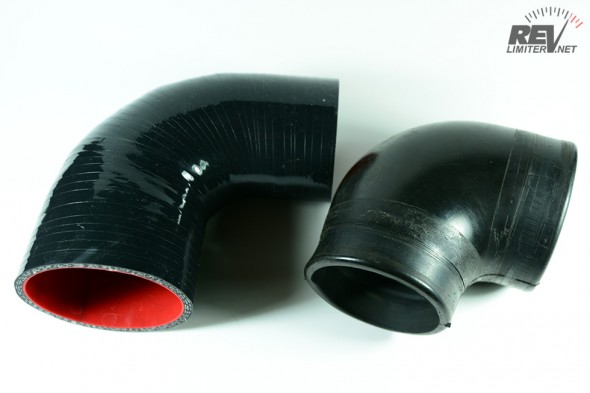 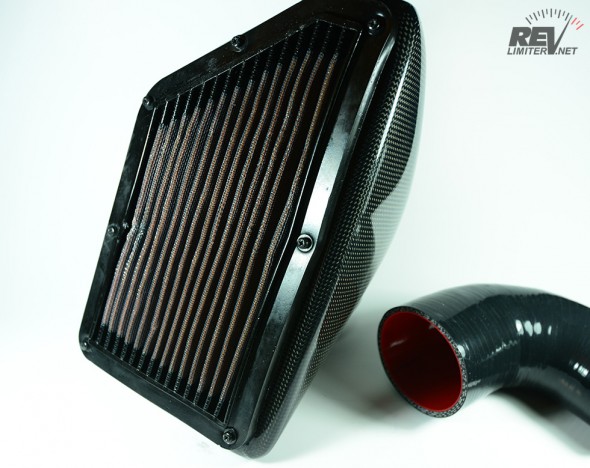 The original D-Technique elbow was pretty old. Long in the tooth you might say. There were a few small cracks and it was just not really too great. A $10 amazon silicon elbow will replace it quite nicely.

I also cleaned the filter. It was quite black when it arrived. A quick bath in K&N products brought it back to cleanliness. I bolted it back to the CF airbox and was ready to go! 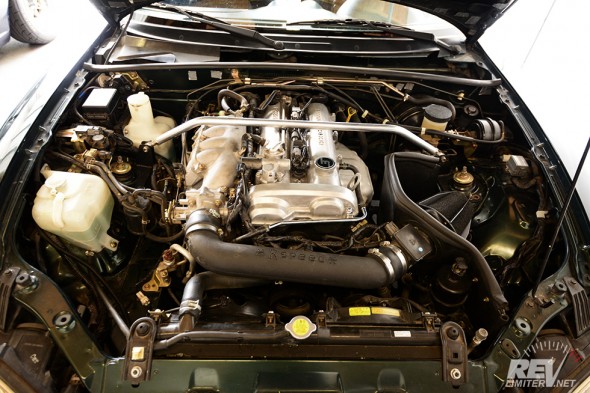 This is another old intake. The very first ones came from Rspeed and had their logo rotomolded onto the tube. They were NA-only items. (Odd trivia: the CF Monsterflows were NB-only items at first.) My Monsterflow has a plug on the side where the NA idle air bypass tube runs. Not the prettiest ever, but it worked okay.

Er… kinda okay. I’d never bothered to see how effective that heat shield was until I was ready to swap the intake. I brought an OBDII reader along for a few days worth of commute and found out it wasn’t very effective at all. The intake would heat soak after about 10 minutes in traffic and be sucking in air around 50-60* hotter than ambient. And it would never cool down no matter how long I drove in clean air after getting warmed up.

Pretty disappointing. I shoulda closed that box up and worked on ducting cold air at the filter years ago. 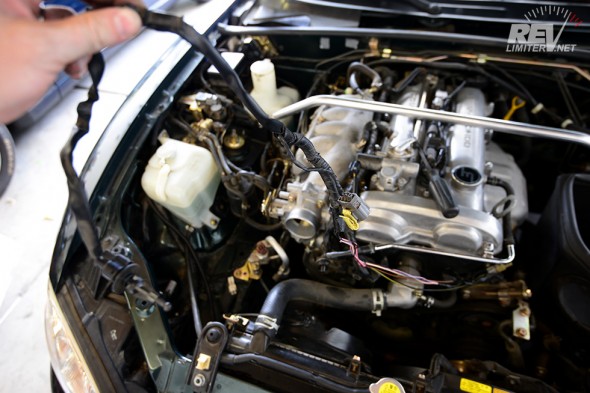 Extending the wiring harness is a right of passage for every NB owner who wants to do a shorty intake. There’s actually no extending to do. The factory supplies a TON of wire in the harness, you just have to cut the tape and unwrap it.

I, of course, re-wrapped and re-loomed the wires after unwrapping. 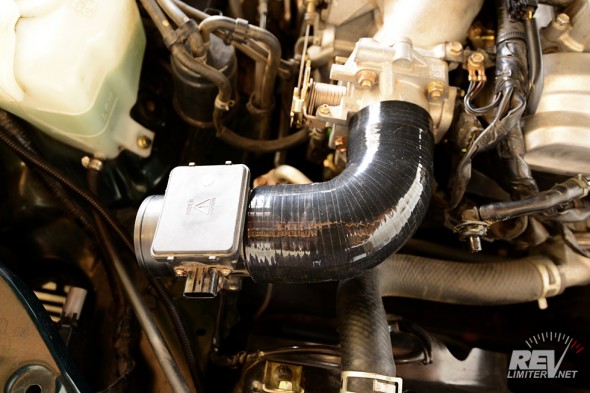 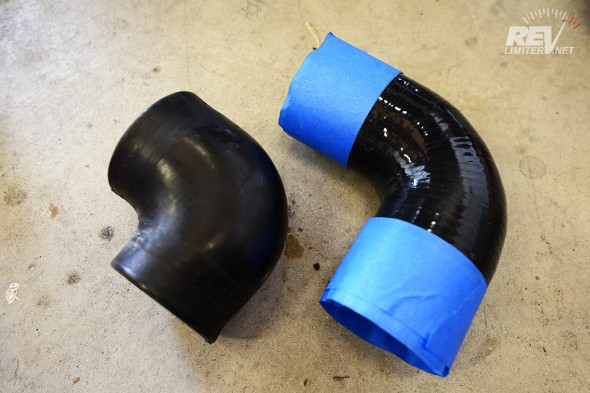 This was a nice surprise. My silicon hose fits!!! It needed to be 2.5″ on one end and 2.75″ on the other. I was fortunate to find such a hose on Amazon for $10 shipped. It’s a bit long, but that’s easily fixed. The D-Tech hose was an excellent template. 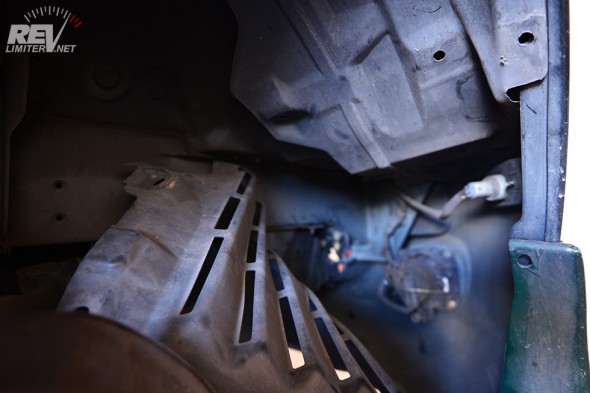 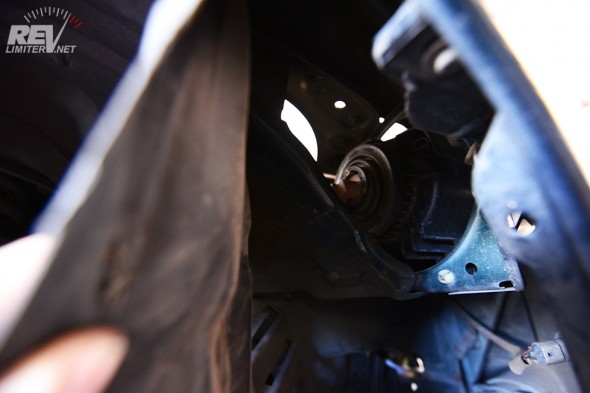 Cold air beside the headlight. 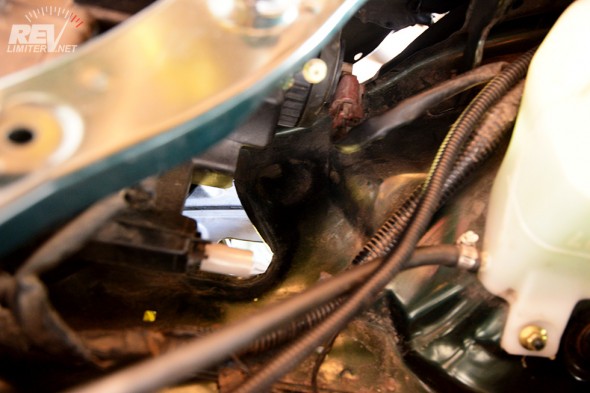 … and a fresh hole thanks to my dremel.

On my list of things to fix was the cold air situation. The driver’s side has a nice hole cut behind the headlight to allow the OEM intake to suck in mostly-cool air. The same hole supposedly feeds the Monsterflow intake. I wanted at least the same inlet on the passenger side for my shorty filter.

I removed the fender liner and cut it a bit to allow that first hole (2nd pic above) to flow freely. Since there’s two fender liners, one can be modified to allow access to the large area below the bumper, but not to splashing mud kicked up by the tire. Then the dremel came out.

5 cutoff wheels later, I had a nice hole behind the headlight to match the one the factory provided on the opposite side. In theory, lots of cold air should splash onto the filter after this small mod. 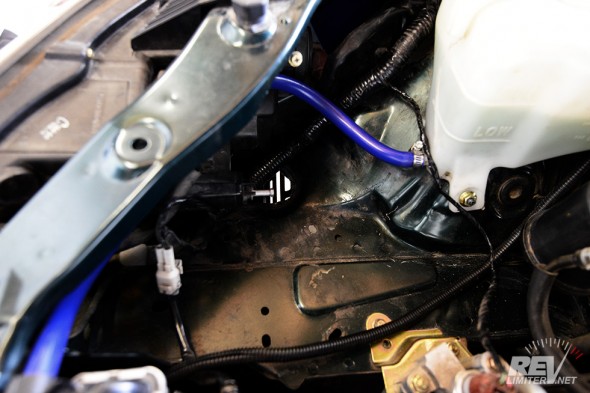 Cleaning wires and hoses out of the inlet area. 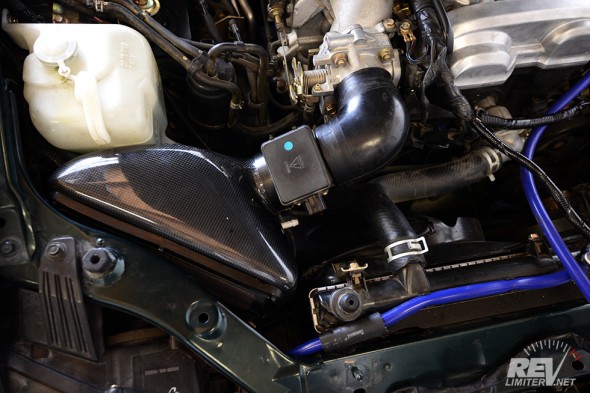 After getting the hole cut, there was more work moving hoses and wiring harnesses. EVERYTHING was in the way of that big carbon intake box, and it didn’t allow room for anything to sit under it.

Those blue silicon hoses came with the intake and actually are original D-Technique items. I… do not like them. I need to replace them with black ASAP. 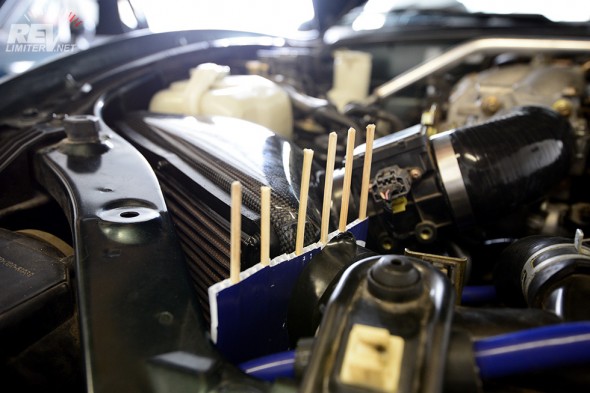 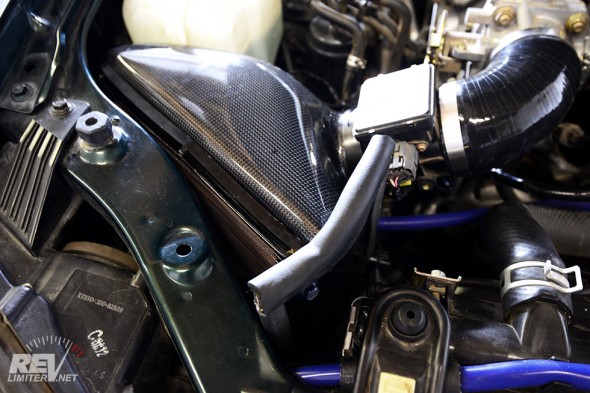 One more small mod needed to be done – shielding the filter from the hot radiator air. After hacking metal out of the engine bay, I didn’t want to undo all that good work by letting super-hot air have easy access to the filter. I whipped out some spare coroplast and some bamboo skewers to do a quick mock-up for a heat shield. It didn’t have to be a big one. Just enough to close off the side closest to the radiator.

If you look close, you can see the coroplast is braced against the filter box by a roll of electrical tape. It happened to be just the right width to keep the piece of plastic standing and allow the hood to smash the skewers into the coroplast. Whatever works, right?

After getting the dimensions right, I just had to cut up some spare ABS plastic and put some insulation on the top edge to let it seal against the hood. The shield is held in place by a small L bracket and two bolts – one bolt through the shield and one of the mounting bolts that holds the air filter to the CF box. Very simple. 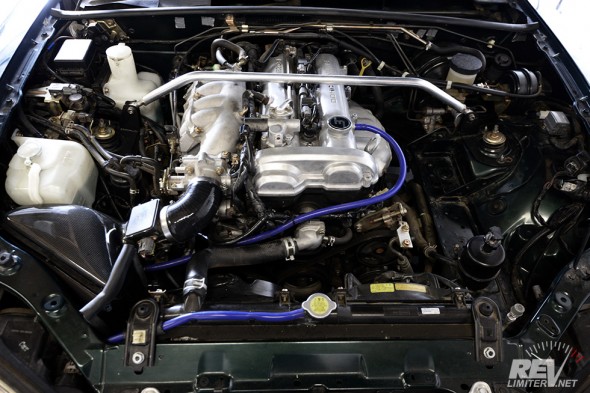 And there’s the coldside intake in all its glory. It really cleans up the engine bay. And, aside from those God-awful blue hoses, I love the look of the CF. It’s a keeper.

And I’m very pleased to report that it IS a cold air intake. On the same drive that was giving me 60*+ intake temps over ambient, I now get 5-15* higher than ambient. It is slower to heat soak in traffic, but, like any intake with the filter in the bay, it DOES heat soak. But a couple minutes driving at speed lowers the intake temp dramatically. Seeing that IAT number drop back down on the OBDII reader made me cheer.

As for those blue hoses, I’ll update this post with a fresh pic after I source some black replacements.

Leave a Reply to GT