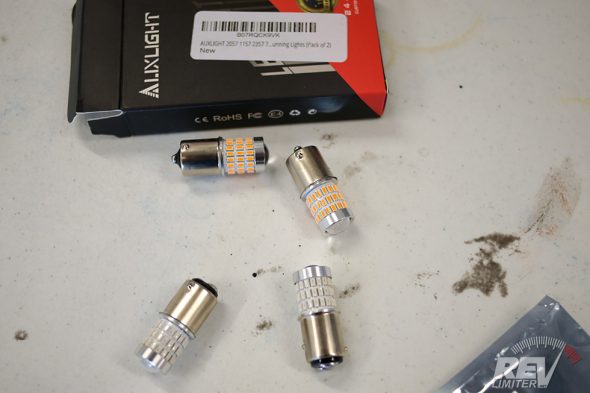 A pile of LEDs

Before you go further, realize that this may be a long winded post that can be summed up with the sentence “Wow, LED bulbs are brighter than stock!” Sorry for the lack of content lately. Truly, gauge orders have been too crazy for me to really do projects anymore. I hope things die down a little…

While out in California for KINOD15, I got to cruise around with Pete and Willis, owners of two beautiful NA Miatas and two beautiful Garage Vary tail light conversions. And Willis had much brighter tail lights than Pete. Like MUCH brighter.

When I asked Willis, he said “oh yeah, I have LEDs in there.”

They just lit up the small round housing with light so very nicely. I made a note to upgrade Sharka’s after I got home.

And I did! They’ve been great! I’m now blogging about it three months later… 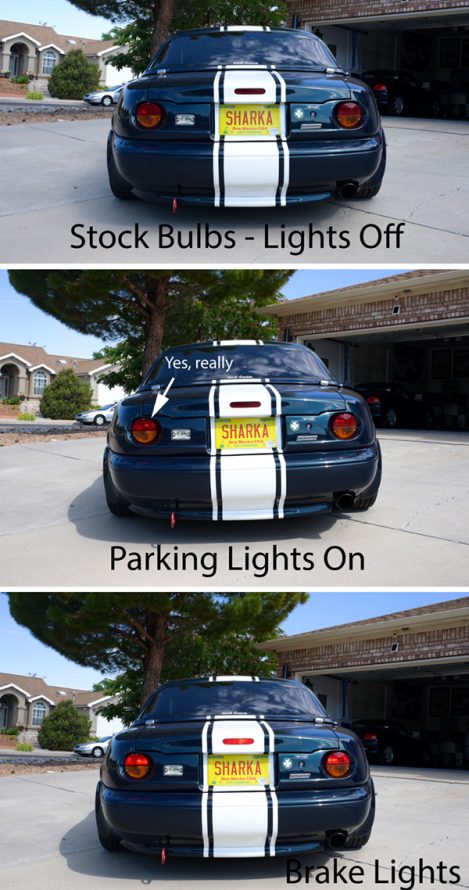 Photos taken at night always look brighter. Even truly horrible lights can look good at night. But in the daytime? This is where you can see how poorly the factory Mazda Porter tail lights function.

Look at the Parking Lights On photo. Really squint. They ARE indeed on in that photo. They just really really suck.

For the brake lights, you need a set of 1157 bulbs. The blinkers take 1156s. A pair of each is all you need. And, if you want LEDs, it’s best to get them in their native color. I have red LEDs for the brakes and amber for the signals. The reason for this is that white LEDs will overpower the lenses and look rather pink / yellow.

Trust me – you want colored LEDs.

The type you want to search for is 57SMD. I got my “Auxlight” brand from amazon. Most brands work equally well, but the 57SMD architecture is the thing. Don’t fall for one that claims to be a bazillion lumens while only having a couple LEDs on a board. These ones with the array of 57 are very bright, very even, and have a good reputation. 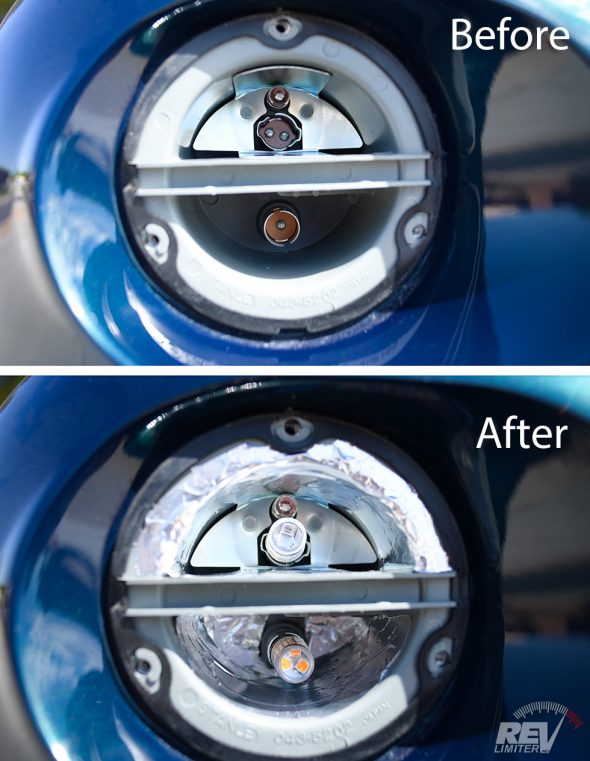 The big problem with the Porter tail lights is the non-reflective grey plastic housing. The brake light has a very limited metal reflector, but the signal light has nothing more than some grey plastic.

And let me tell you – if you have a set of Garage Vary tails with the grey plastic, you need to apply some reflective media to the inside. Even with the stock bulbs, this makes a HUGE difference. The whole reflector is filled with light instead of just the small center spot containing the bulb. It’s worth the few minutes to do it.

In the future, I’ll be completely removing the lights to coat the inside with chrome paint. 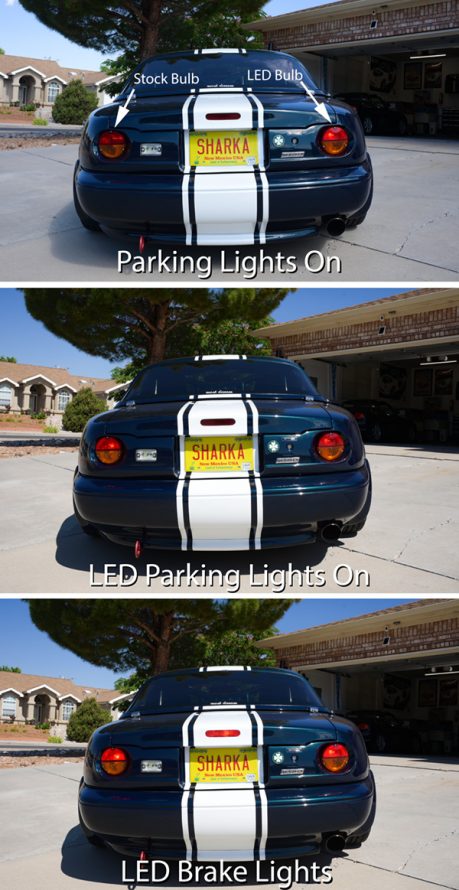 And there we are! Many paragraphs later, you can see the result of swapping out those factory bulbs for LED ones. The light output from the two round brake lights now matches the factory NA 3rd eye brake light.

It’s a very OEM plus upgrade.

LEDs are brighter. Who knew? 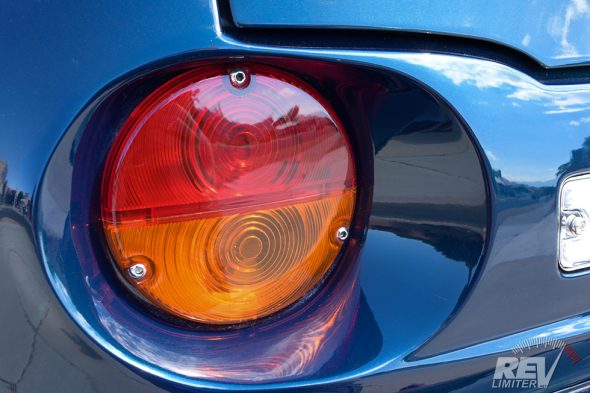 I also took the opportunity to upgrade the hardware connecting the Porter lights to the body. A few nut-serts and some polished button heads really look so much nicer than the old stuff… which was self tappers into the fiberglass.

Yes, self-tappers. That was what GV gave me and that’s what Sharka’s had all these years. Don’t judge.

But I didn’t stop there. 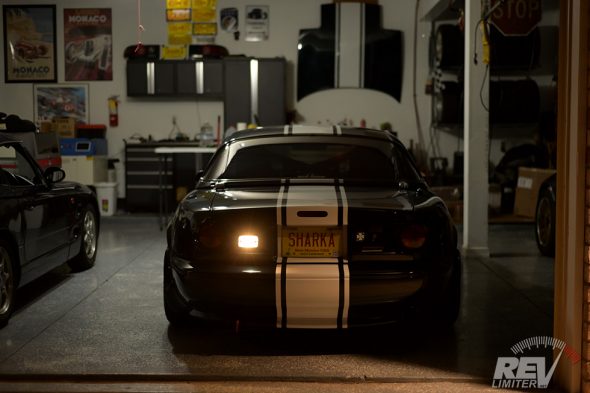 Tiny back up light.

Sharka has a minor tint on the hardtop which makes things a bit dark at night. Not terrible, but a bit dark. But even with the hardtop removed, that tiny Daihatsu reverse light never did anything. It was always worthless. 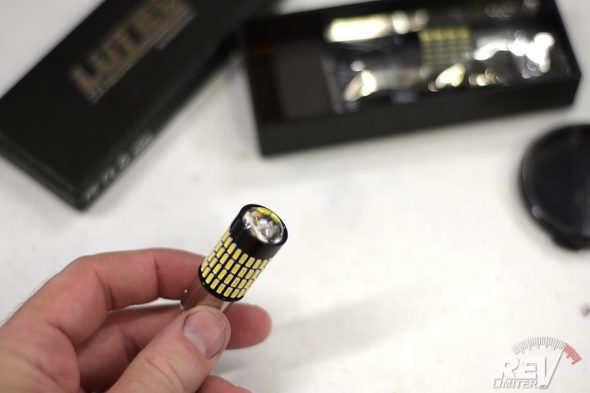 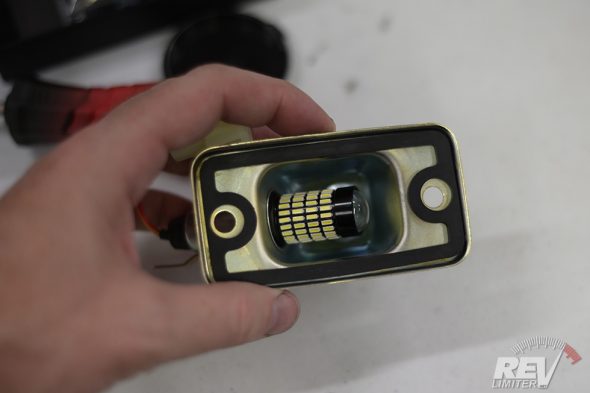 Another amazon find – this was a 1156 from Luyed, which came up when searching for a 1156 reverse light. It seems to have one more row of LEDs than the 75SMD style. It juuuust fits in the housing. 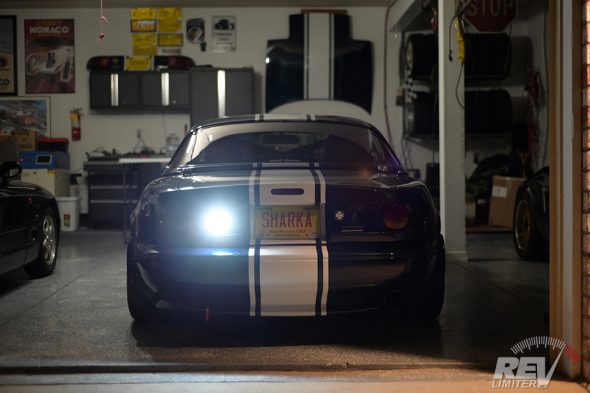 I took some pains to set the exposure for both reverse light photos exactly the same. As you can see, the LED is indeed brighter.

I told you at the beginning didn’t I? I said the whole post could be summed up with “LEDs are brighter, who knew?”

Anyways, I’m pretty pleased with these small upgrades. The brakes are now more visible in the daytime and the reverse light is actually useful at night. Success all the way around!

Hopefully it’s not another 4-5 months before I have something to blog about again.