This post is concluded in The Hardtop Security Project – part 2. Check it out for my final solution.

Whenever Sharka wears the hardtop, my thoughts always turn toward hardtop security. Like, how to make sure Sharka is still wearing his hardtop when I come back at the end of the day. It’s a conundrum. And as far as I can tell, NO ONE has a security method that’s up to snuff.

See, there’s an elephant in the room. That elephant is named Miata Door Locks Are Useless. I hate that elephant. I’m not gonna talk too much about him. We’re just gonna all agree that Miata door locks might as well not be there. Even with the hardtop installed.

We can’t rely on just the door locks to keep our hardtops on our Roadsters while we’re away. 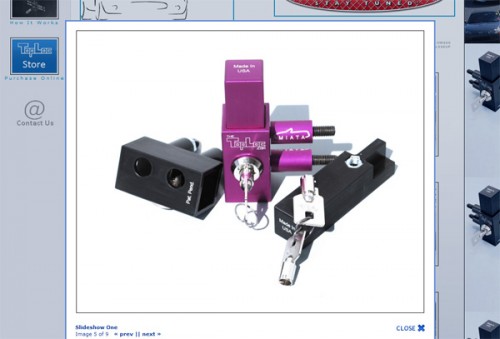 The other weakness of the TopLoc is that in relying upon the Miata’s stock bolts to hold the stock side latch onto the hardtop itself. While it wouldn’t be easy, I’m pretty sure that a determined thief could get those side latch bolts off without unlatching it. A few moments with a cordless drill to the corners of the latch handles are all it would take. 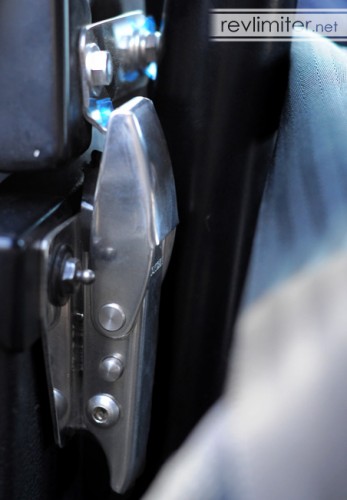 This is the kind of latch I run on Sharka, the Beatrush slim profile hardtop latch. This allows me to use my hardtop with my Hard Dog non-hardtop rollbar. And the latch has a nifty feature – a hole in the bottom that you can put some sort of lock through.

I’ve got a shiny bolt with a funny looking head going through that hole. 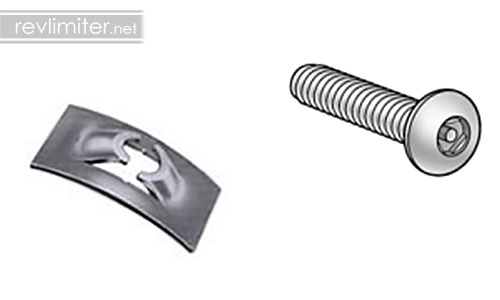 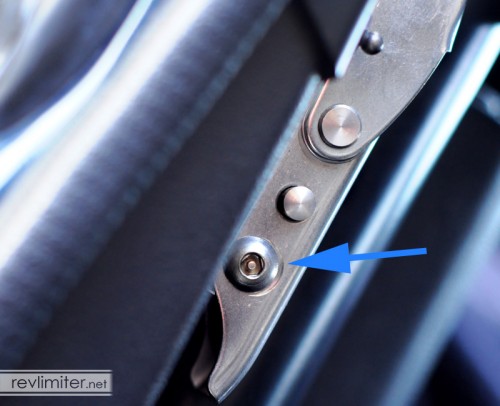 My Beatrush latch is too close to my rollbar to use a traditional lock. The space between the bar and the latch is a little wider than the end of a wrench. But that’s enough space to put a flat speed nut. I don’t need a lot of strength here. I just need a nut that you can’t grab with a wrench.

On the other side is this spiffy tamper-resistant bolt. I’m leaving this pretty vague right now. I don’t want to publish the details far and wide. And I’m not done with this project yet.

As you see in the first shot, the hardtop side of the latch system (at the top) is still held in place with regular bolts. It’s proven exceedingly hard to find a security bolt in the right thread pitch for the stupid hardtop… 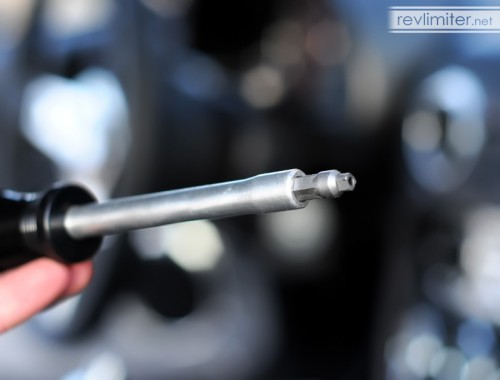 The key. I better not lose it.

And here’s what the key looks like. Given the small size of the bolt and the tapered head, it should be pretty difficult to remove. At least that’s what I’m hoping.

That’s part 1 of my road to Miata hardtop security. I was planning on holding this until I found a good bolt solution for more than just the Beatrush latch, but thought I’d post this anyway. Share my progress and stuff.

What do you think? Post a comment and let me know. Or check out The Hardtop Security Project – part 2 to see the final solution.