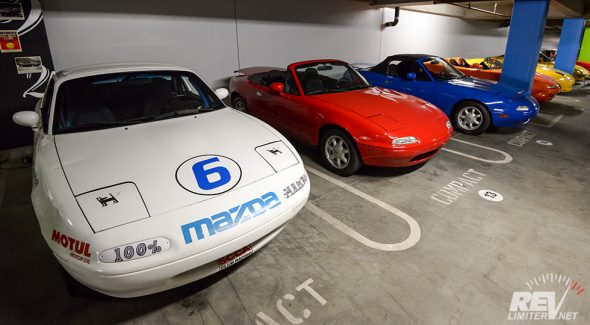 It’s about time, eh? 2 posts of (amazing) non-Miatas in a Miata-centric blog? How do I even live with myself? ha!

Here it is. The Miata content of the Mazda R&D Basement. Or at least as many cars as I was able to photograph. There were a few that I didn’t shoot thanks to the EXTREME distraction of the rest of the cars.

Seriously, I’ve been kicking myself while editing the pix. “WHY did I not take pix of XYZ Miata?!?!?! UGH!!! Interior shots of it only? WTF was I thinking?” and so forth.

But I did my best. 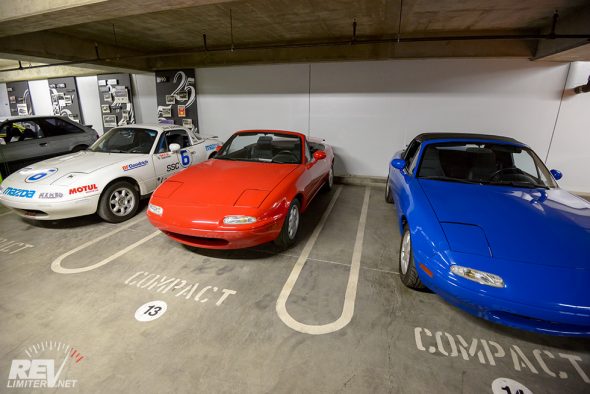 You will (probably) never see a grouping of three Miatas older than this anywhere else in the world. These are cars 14, 15, and 17. As in, that was the order they came out of the assembly line. I’m not sure if Mazda Japan has perhaps cars 1, 2, and 3 on display (which is totally possible) but these three are some VERY early Miatas.

These three cars are the ones originally unveiled at the 1989 Chicago Auto Show. These were the world’s first peek at the Mazda Roadster. 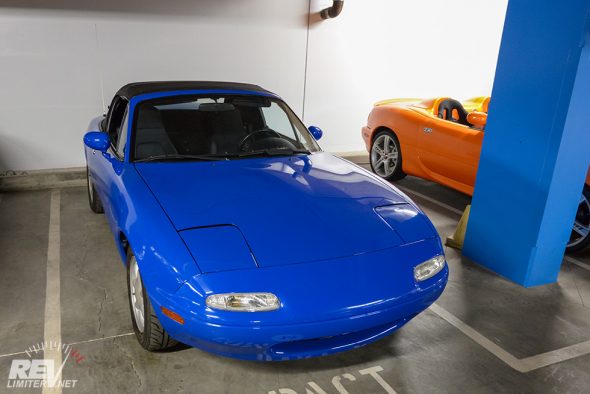 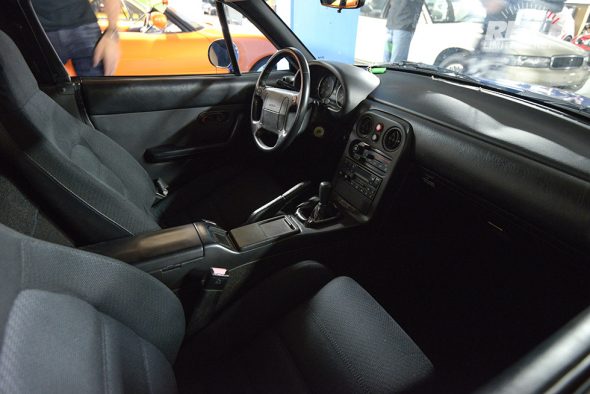 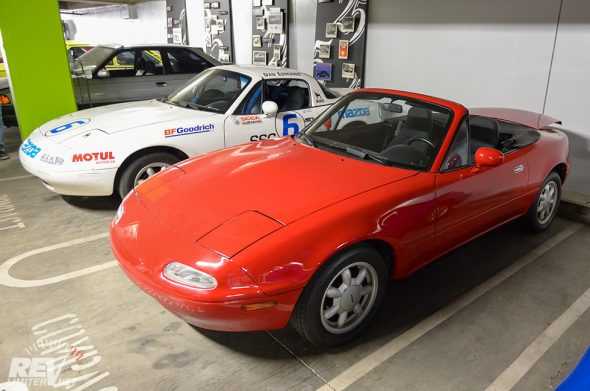 The Mariner Blue is the earliest, being car #14. And it’s just a time capsule. So perfect. Flawless even. I mean look at the above interior pic. I bet you can imagine the new car smell?

It did indeed smell new.

Car 15 is one I’ve seen before. It was on the Millionth Miata Tour. I was allowed to walk all around it behind the velvet ropes and take pix. It was somewhat more moving back then being out in the sunlight and by itself, but seeing the car again was not something I ever expected to do in my life. Now I’ve seen it twice in 12 months.

Go check out my blog on the Millionth Miata Celebration event if you’ve not already seen it. 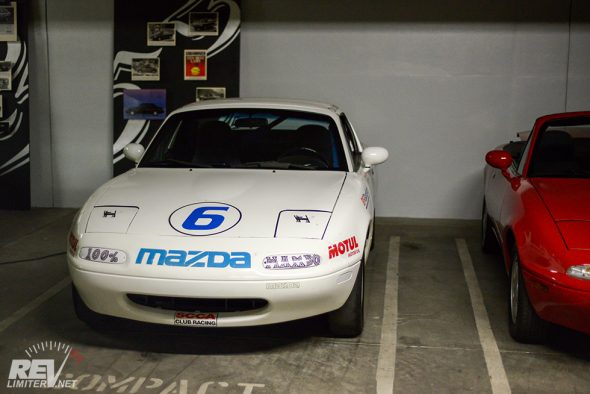 This white one was the very first Miata ever raced – VIN #17. It’s amazingly stock. Extremely stock. It ran in SSC (showroom stock), so not many mods were allowed. It has a roll cage and not much else. The owner raced it a bit more than 6000 miles. Now it sits with its Chicago show brothers. 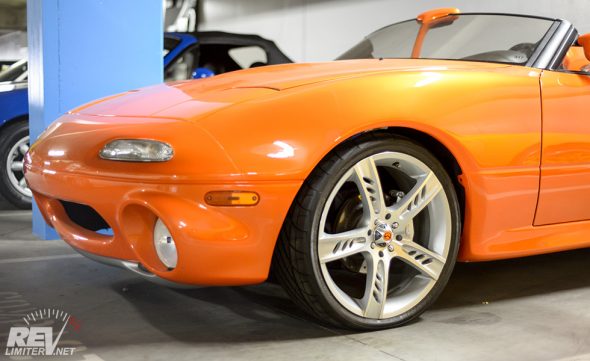 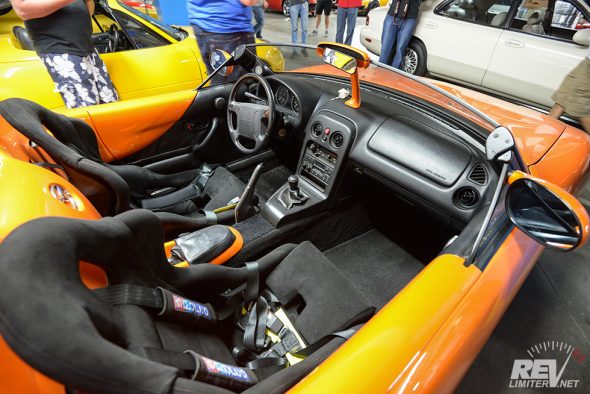 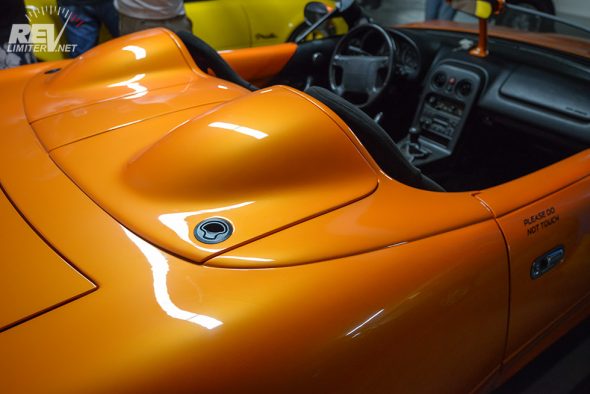 I actually saw this car years ago at an auto show – the M-Speedster concept. It was merlot colored back then and very very pretty. They painted it for a throw-away appearance in the first Fast and Furious movie.

Because I’d seen it before, my over-stimulated brain for some reason said “You don’t need to take pix of that one, give the yellow one your attention.” Which… ugh. Kicking myself. At least I got these three.

The electric orange color was pretty amazing in person. Tons of depth and complexity. I tried to capture it a bit with the helmet storage shot.

Regardless of lack of photos, the M-Speedster is a pretty interesting car. Full NA8 interior, race seats, short console, and a chopped windshield. The back half of the cockpit is painted in body color with the integrated bubbles behind the seats. As I alluded to, they’re meant to be helmet storage. 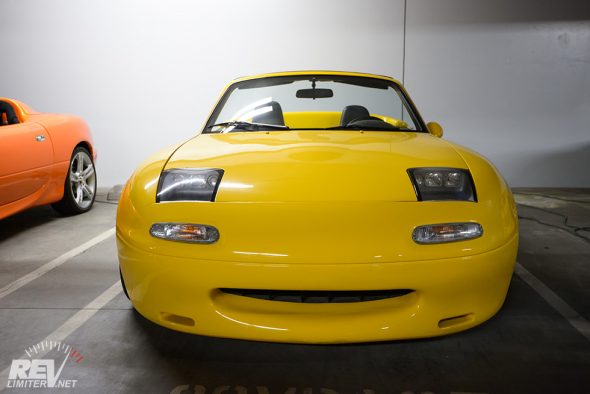 Before you do anything else, go look at JNC’s article on this car. They go into more depth than I could ever dream. More than I could achieve in an hour of inspection and photos of this car by itself. It’s an excellent article. I’ll sum up some of the info.

This is a car Mazda made in 1989. It’s a PRE-production Miata, not something with a VIN that rolled off the assembly line. They showed it off before the cars were even in showrooms as an example of what a person might make with the Miata as a base.

Mazda was modifying these cars before they were even cars. 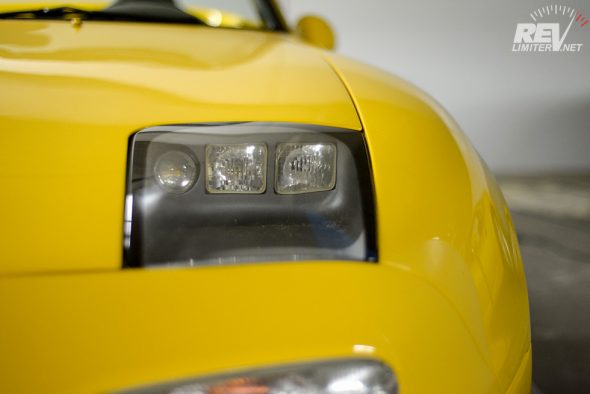 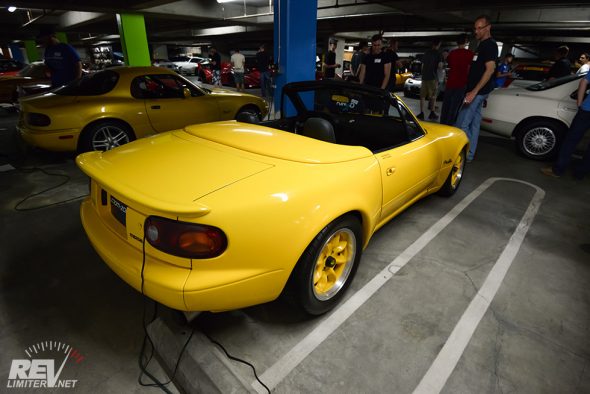 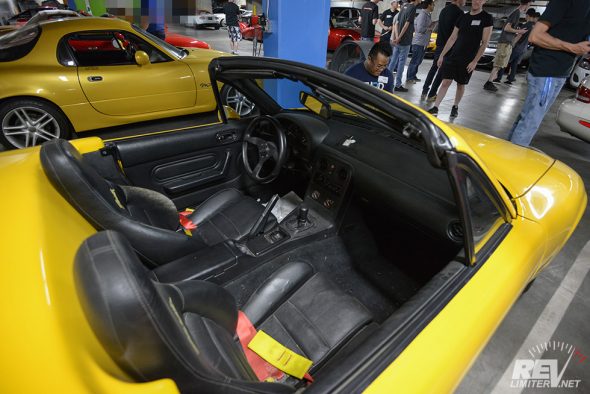 There’s a lot of amazing things going on here. And so much yellow paint.

This car was built by Mazda USA as far as I know, so the modifications done were with a 90s (or late 80s) American flavor. It was an American interpretation of what a modified Japanese car of the day would look like. Panasport wheels instead of Watanabe. Millen hard boot instead of Garage Vary. A single body-hugging side mirror. A few other things.

A quick inspection of the interior reveals the pre-production nature of the car. Look at the doors – the door handle is way up at the top entirely in the wrong place. There’s some other differences as well.

And that yellow paint. It’s apparently the 2nd or 3rd color the car was painted (there’s red and blue on the car in various spots). And for being a color sprayed in 1989, it’s quite close to the 1992 sunburst yellow. Like, very very close. 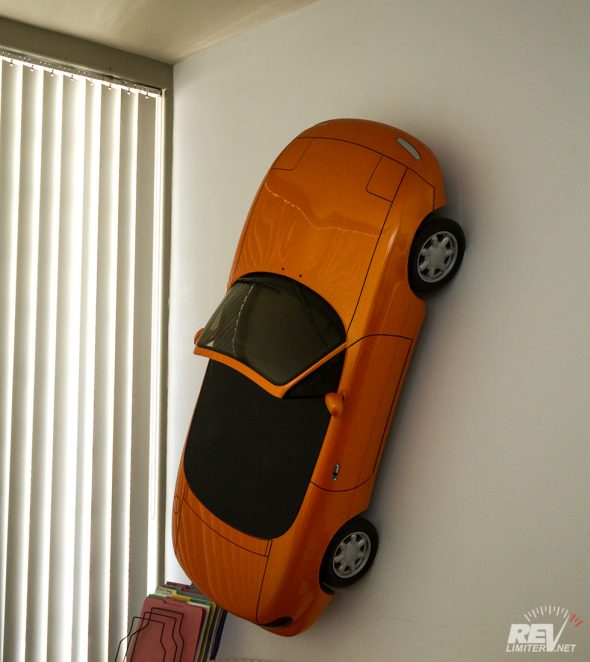 Miata lovers know about the six Color Cars that Mazda made in 1990. (there’s a very old article on miata.net here.) They sprayed six cars and sold them to friends and family. But… this one was made at the same time.

The car shown here is a scale model hanging on the wall at Mazda R&D and is the most expensive Miata per-pound in the world. We were told this was in the $150,000 range. And it was sprayed in a unique color. AND it was made the same time as the other six color cars.

Is this copper scale model the 7th “Color Car” made in 1990? I’m sure some folks could answer that, but I’m not one of them.

Back to the Basement. 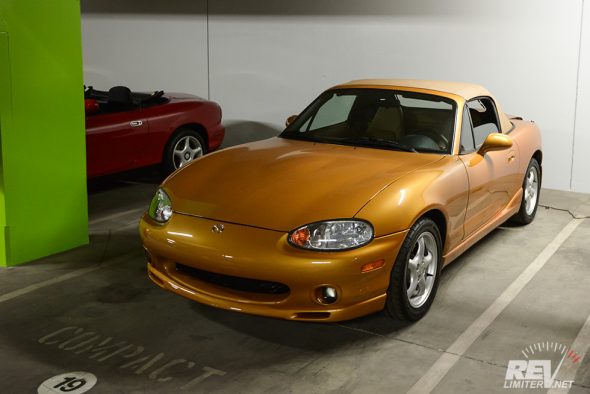 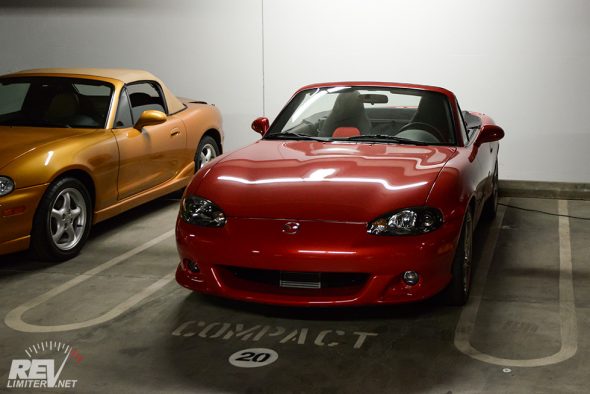 These were two special number cars. The Evolution Orange car was the 500,000th Miata to roll off the assembly line. I believe our tour guide said that it just kinda happened that way. They didn’t plan the color or trim level or anything. This just happened to be car number 500,000. 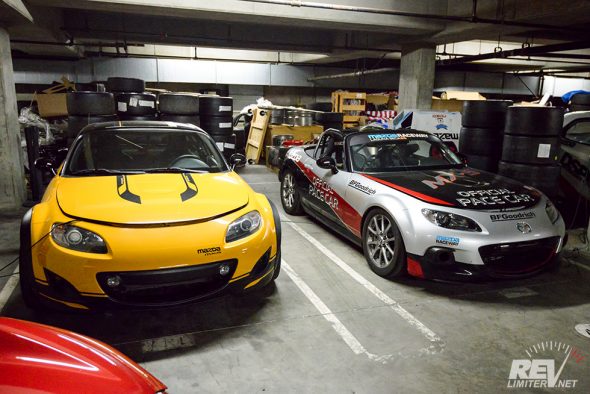 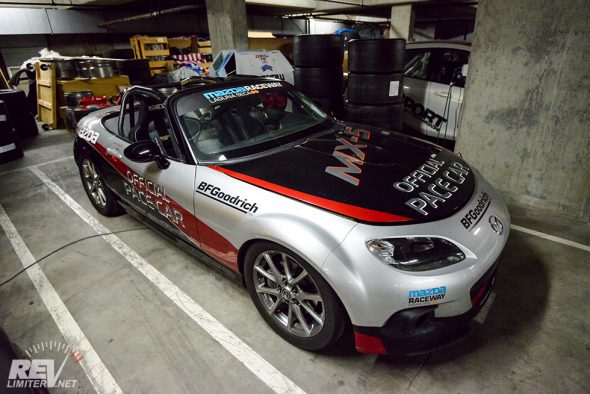 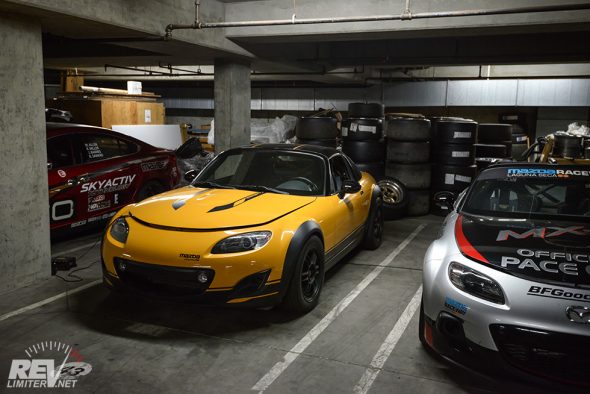 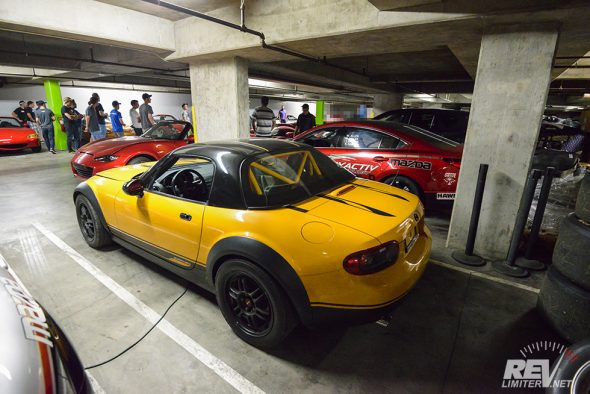 You didn’t think I’d ignore the NCs did you?

The car on the right is an ex-Endurance Racer. It has over 100 hours of endurance racing under its tires. It also has something like 20 Cup and Club Racer events to its name. The car is now an MRLS Pace Car.

The Super 20 made the press rounds a few years ago. It’s what was ALMOST the Mazdaspeed NC. It has a supercharger under the hood courtesy of FM and Cosworth. It’s got big brakes, big rubber, a fun gear ratio, and some other great parts. Go read the Jalopnik article on it.

I’ll admit it here – I never liked the NCs when they came out. It took me until the Super 20 to really warm to them. But when THIS car came out it was like the fog lifted from my eyes. I suddenly saw something I wanted to drive.

And now an NC is part of my fleet. 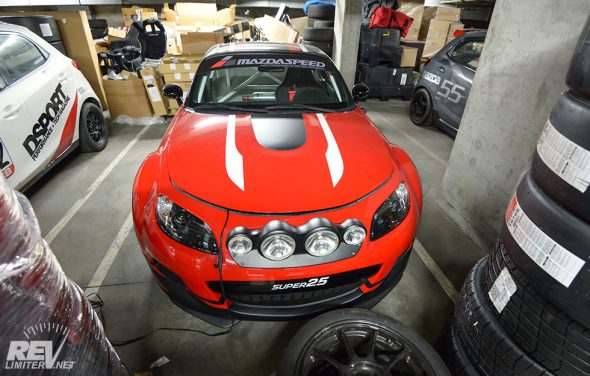 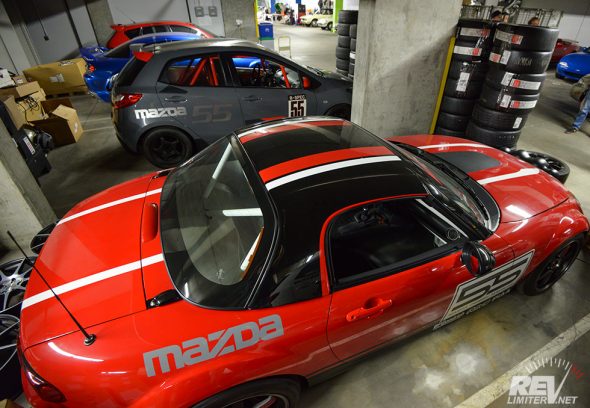 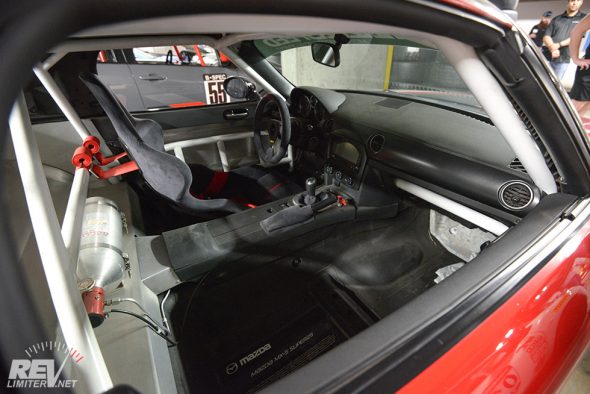 Mazda made this car, the Super 25, just minutes after the Super 20 hit the scene. Well… two years later. But that’s a pretty damn short amount of time. There was still CRAZY buzz about the Super 20 when the 25 hit.

The Super 25 was endurance-racer inspired. The light pod, the graphics, the full race interior. The 55 door number comes from the 787B Le Mans winning car.

And it’s pretty! It’s a great concept car. But it is greatly overshadowed by the Super 20, at least to this enthusiast. 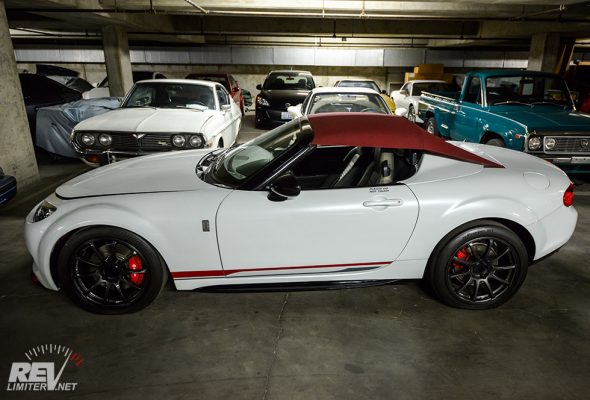 Last but not least, they had a SEMA NC with the “OEM” Bikini top. So very cool. I’m not sure how it was actually mounted, but the top is a full hardtop underneath. At least, “full” in the sense that the stuff under the canvas is a hardtop. Very different than the center bow that Project G uses to keep their bikini top secured.

And that’s it! That’s the Miatas of the Mazda R&D Basement. Thank you for coming along on the tour with me! Leave your badges at the door and drive safe. 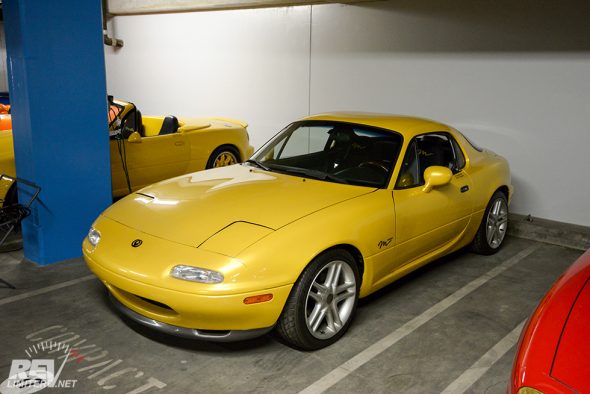 I can hear the protests out there already. “BUT WAIT!!! What about the Coupe?!?!?”

Don’t worry. It’ll be in the final Basement post. I took too many pix of the M Coupe and the NB Concept to fit them into this post. I think those two cars have 15 or more pix between them. They’ll be in a dual-spotlight post to round out and finish up my Basement tour.

No Responses to “Mazda Basement Tour – The Miatas”