My ASUS A8-series laptop bit the dust. It was barely 2 years old. It was still fast and reliable. Though the crappy ATI Mobility x1700 graphics card kept me stuck at Intrepid (Ubuntu 8.10 for the n00bs) due to no driver support, that laptop still worked great. It was named “teletran1” after the Autobot’s computer in the G1 series.

The hinge was strong metal. But it was screwed to very brittle plastic. That plastic went away and my laptop stopped opening and closing. I’ve lived with an epoxied screen for the past few weeks while I decided what to do. 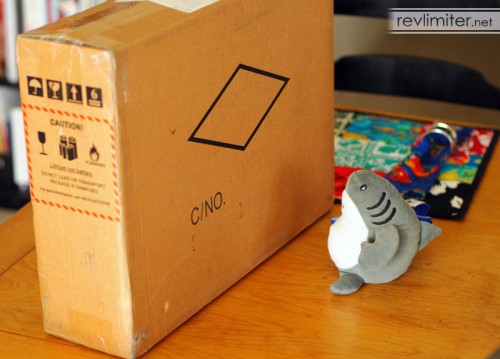 Enter a company called System76. They sell Linux laptops, desktops, and servers. No Windows in their shop, just Ubuntu. They’ve achieved a very good reputation in the Linux community and their stuff seems to be very well built. 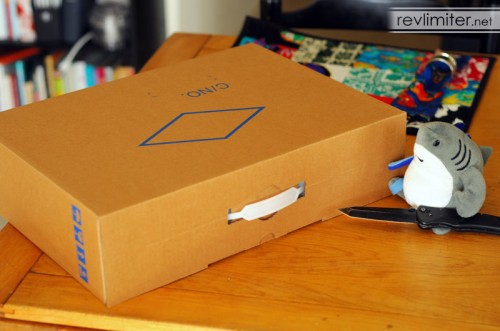 Who gave the shark a knife?

The idea of the out-of-the-box experience with a Linux computer had a lot of appeal to me. 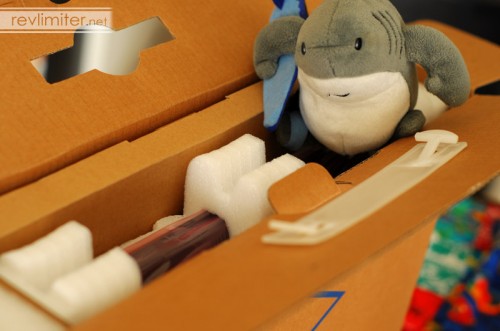 "I assume that pink thing is food?"

Out of the whole laptop lineup, I was most interested in the Pangolin Performance and the Serval Professional. Both are 15.6″ widescreen (16×9) laptops. At the time I was shopping, the specs and prices were very similar too. Both could be had with the guts I wanted for around $1000.

And it would be really cool if you could click the above links and see the systems I’m talking about, but you can’t. A few weeks after purchasing my laptop, system76 upgraded both of these machines in their online store. So you can’t play with the configurator with the machine I bought. But anyways, I chose the Pangolin due to it being a couple hundred bucks cheaper and a couple pounds lighter. 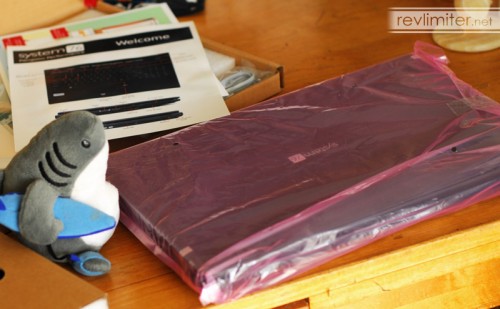 At this point, I took the laptop away from Sharka.

Specs of my Pangolin Performance series 6:

Since the P7 and P6 share the same chassis, this review is not totally dated immediately upon publication. The guts might be a little faster in the PanP7, but the chassis is the same. So read on.

Really, I’m not wasting my time with this review of a laptop that’s now 1 generation out of date. 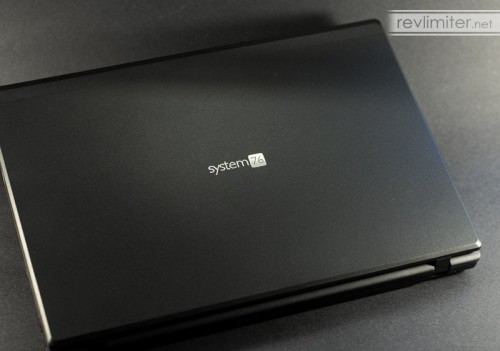 So fresh and new. Not even a single sticker.

First, the outside. The Pangolin has a sparky grey-black body. 5.8 lbs. It’s got a little heft, but it feels nice on your lap. Solid. 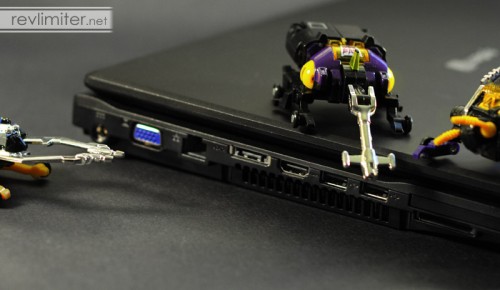 Not 10 seconds after I plopped the laptop in the lightbox, the Insecticons invaded. Oh well, at least they match the laptop’s coloring.

On the left side is most of the connections. We have 2 USB, 1 HDMI, 1 SATA, ethernet, and the monitor output. There’s also the fan exhaust and power input on this side. Oh, and the multicard reader ports on the far right of the photo. 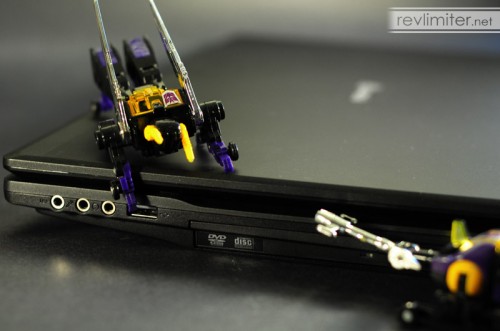 Bombshell attempts to eject the CD. 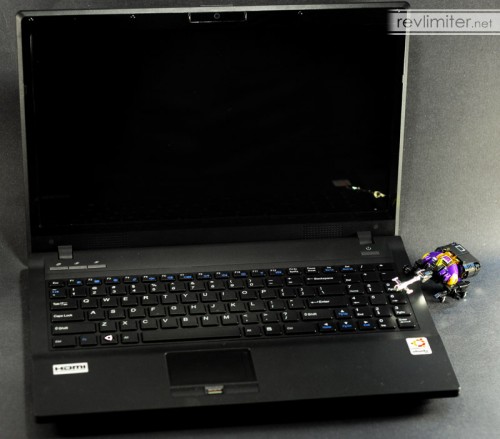 Insecticon spit is hard to clean up.

Time to open it up. Though some people seem to not like it, I’m a huge fan of as wide a screen as possible. Being a programmer, the extra real estate helps while coding. And I get more room to shove my Photoshop tools. More room for everything, really. And the 1600×900 screen is just striking. I thought the one on my ASUS was clear. The PanP6 blows it away.

Up top, we have the webcam. And right above the keyboard are the Browser, Email, and Silent-Mode keys. And lemme tell ya, silent mode is VERY quiet.

Since my last laptop died due to hinge failure, I was worried about the hinge in the Pangolin. However, it seems very strong and well made. And 2+ years of posts on the Ubuntuforum only reveal one person with a system76 hinge problem. And that was not on a Pangolin. 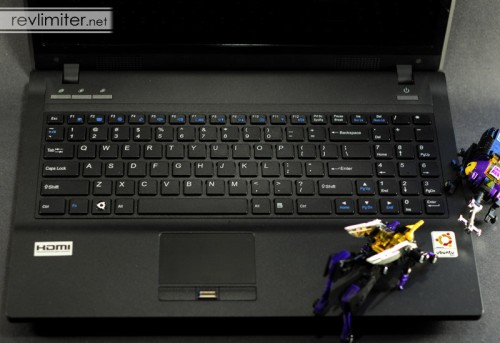 The keyboard is the new “chicklet” type, where the keys poke up through the chassis. I’ve tried this style in the B&M electronics stores and have always liked it, so I thought I’d give it a go with this new laptop. After about 2 week’s use, I’ve gotta report that it’s outstanding. The keys are easy for touch typing and they have just enough give.

The 10-key on the side is pretty useful, even though I’ve never used it in 10-key mode. The placement of the PgUp/Dn keys is great and having two sets of arrow keys is wonderful. I tend to use the 8462 keys more than the traditional ones. And finally, the best thing ever, two delete buttons. I previously thought that a big backspace button was the must-have keyboard feature. Now I’m on the double-delete bandwagon. It’s amazingly useful.

Finally, the touchpad. It has these little raised pips all over it, giving you a tactile experience when you mouse around. I’ve never felt a touchpad like it. After 2 weeks, I don’t hate it. In fact, quite the opposite. And the side scrolling works GREAT! 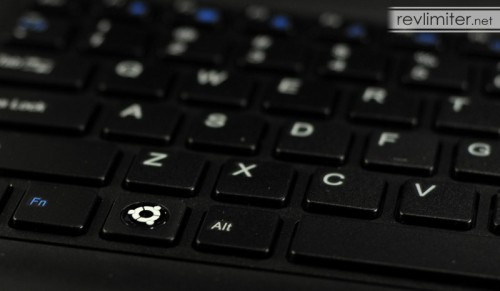 The piÃ¨ce de rÃ©sistance is the Ubuntu key. While looking up specs and reviews, I found a few pix of this key, but never a very good one. It always looked like a cheap sticker applied over top of the Windows key. I can safely say that is not the case. It seems to be a little window in the middle of the key with a logo embedded underneath. It doesn’t quite look like the other keys with the raised circle, but I have no fear of it rubbing off.

Overall: this is a very well built laptop. I’ve found no game-stopping issues with it in 2 weeks of use. I’d recommend the PanP6/P7 chassis to anyone. 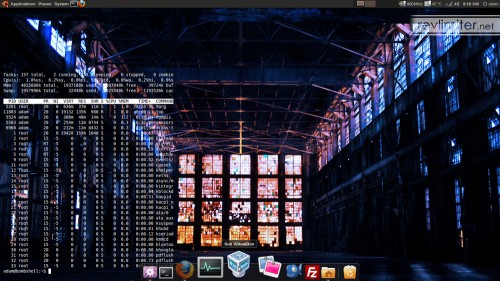 This would be an incomplete review without at least one screenshot. This is how I have it setup currently. The Dust theme, Gnome Do with Docky as my lower panel, and a clear xterm running on the screen background. If you click, you can see that I named the laptop bombshell after the little Insecticon who helped me so much in the lightbox.

You’ll also see the laptop idling at 800mhz and 42*C. This seems to be about how hot the system runs, which is not hot at all in my experience. My Asus A8 idled at 50-55*C. It was not very pleasant. 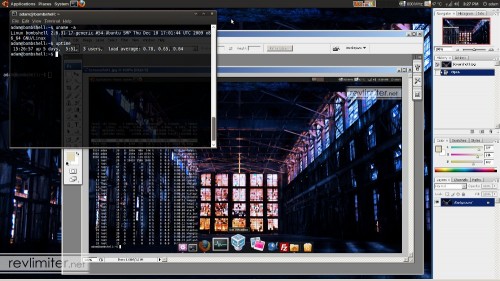 What works: (Sorry for the disorganized nature of this list)

Overall: This is the most stable Linux system I’ve ever touched. I’m truly impressed. I have zero buyer’s remorse and would recommend it to anyone. Even a Windows user.

After living with my S76 Pangolin for nearly 2 years, I’ve got some observations to make.

The battery is a bit weak, but it’s been that way from day 1. I was shipped with a weak battery. I reported this through the System76 support and received a replacement very quickly. And that replacement was even weaker. So, I shipped it back and kept my original. They never answered an email of mine on the subject after that.

The mouse has been difficult since day 1. If there’s the slightest bit of moisture on your finger, the cursor jumps all over the screen until you dry your finger and the trackpad. This can be minimized via mouse settings, but it has never been resolved. There were a few threads on the Ubuntu forums about this, but never any solutions posted by System76.

So, with 2 years of use, I’d pronounce it a decent laptop with mediocre tech support. Perhaps other customers get great support and my experience is unique, but it is my experience. That’s the only thing I can blog about.