Guest Blog – To Denver and Back!

Part Two of this journey is our drive up to Denver where my wife will hang out with friends whilst I’m stuck working.Â  She’ll then fly home and I’ll start the drive back with another lay over in Albuquerque where the Three Amigos will finally be able to meet up and do some drives!Â  Before heading out on Saturday we spent some time with her friend Dawn.Â  They were both stationed in Korea and she is an absolute hoot.Â  Before meeting up with her I took my wife up to Sandia Crest and then met up with Dawn at The Monte Carlo.Â  For those keeping score, that is the second Sandia/Monte Carlo adventure this trip.Â  And there will be a third next week. 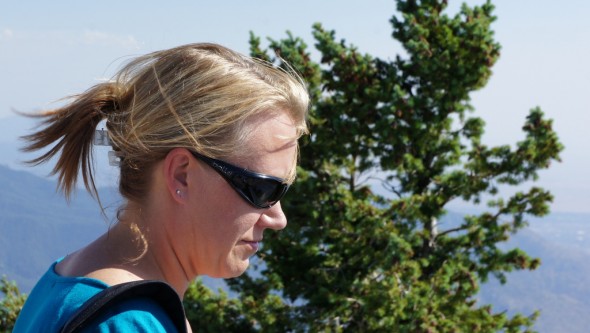 After dinner we headed over to Dawn’s house for cocktails and stories.Â  And dogs.Â  Well, actually, have you ever seen a hummingbird with legs?Â  Zoe is hands down the most hyper dog I’ve ever met.Â  This was its only shot, utilizing the high speed shutter, that didn’t have a small brown blur in it. 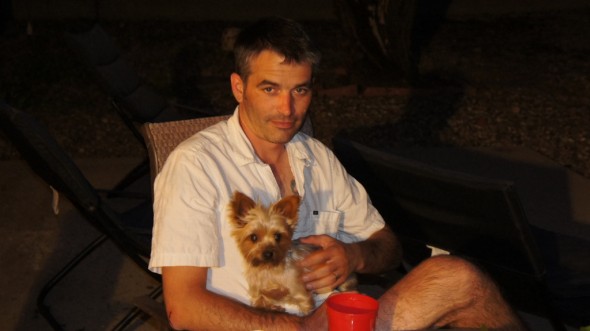 Beautiful sky on Friday night which allowed me the chance to snap some more shots of Flipper. 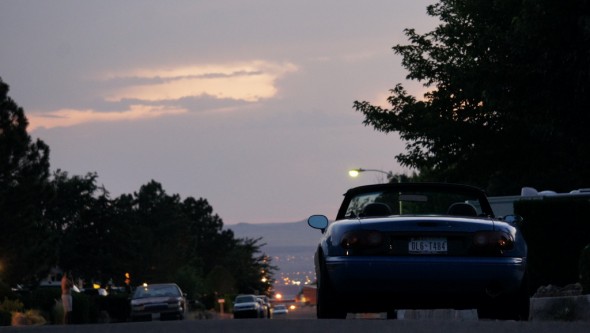 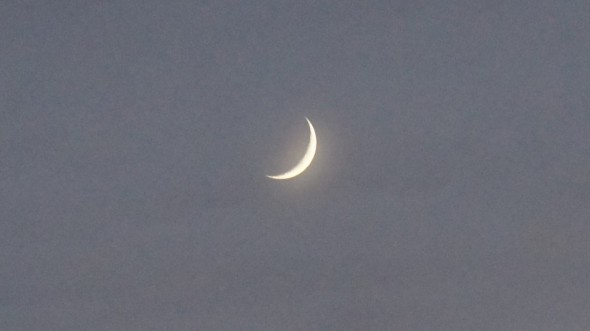 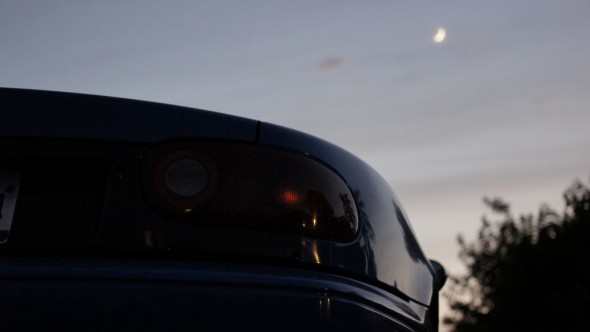 Saturday morning we got up and started the trek up to Denver with an overnight stop in Colorado Springs to hang out with a co-worker/friend.Â  We took 14 around the east side of Sandia Crest, through Santa Fe, and then up to Taos.Â  The scenery is breath taking and worth stopping for along the way. 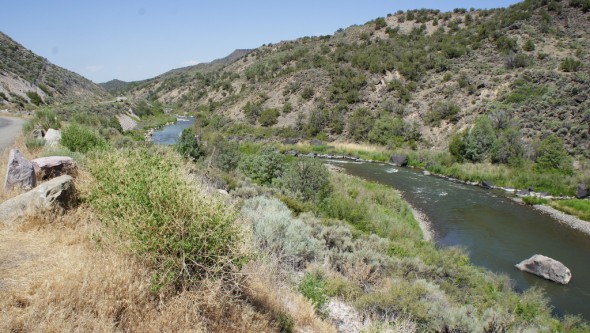 Between Santa Fe and Taos 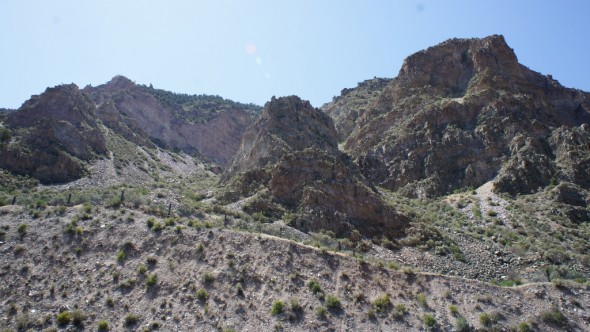 Across the Street from the River 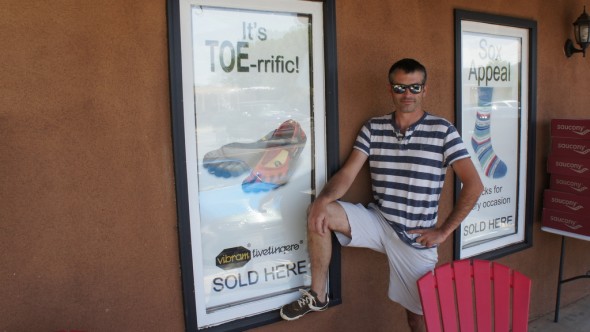 Getting a ‘lil Captain in me in Taos

Normally shoes wouldn’t be a matter worth discussing; however, I’ve had the worst luck with shoes this trip.Â  I started out with my usual Sperry vented boat shoes.Â  I don’t know if the dust magically mixed with my sweat to create some kind of glue but those vents were worthless.Â  My feet stank so bad I couldn’t stand the smell of myself.Â  Decided to go with a pair of Sketchers and wear socks.Â  They make a great narrow shoe but being new they were stiff as hell and made driving uncomfortable.Â  As we’re cruising through Taos my wife spots “Good Soles”.Â  I’ve always wanted a pair of shoes that have the individual toes so a quick u-turn andÂ sure enough, they’ve got them and I had to have them.

They take a little getting use to and I still have to manhandle toe two and the pinky to get in their designated spots but once in they are the most comfortable shoes I’ve ever worn and they are a dream to wear whilst driving.Â  Highly recommend! 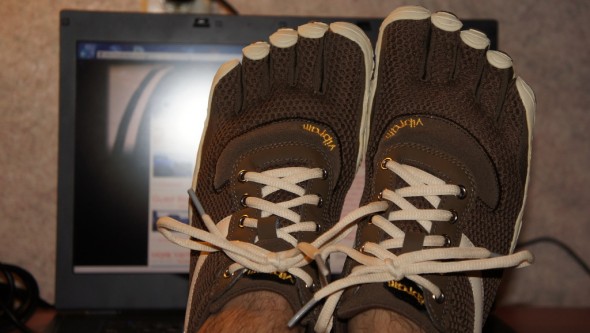 After stopping for a quick bite to eat in Taos it was again time to leave civilization and head out into the wasteland of northern NM/southern CO.Â  The new radiator proved its worthiness through the mountains to Taos and I have no reason to doubt it for the remaining journey.Â  So far, so good! 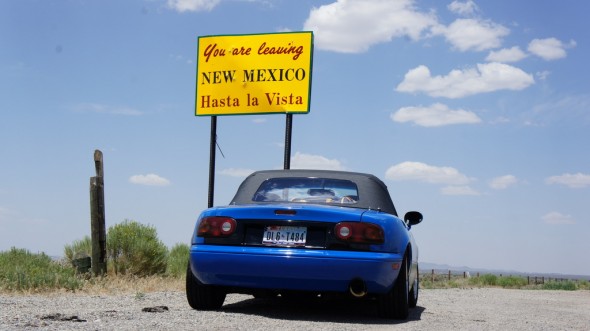 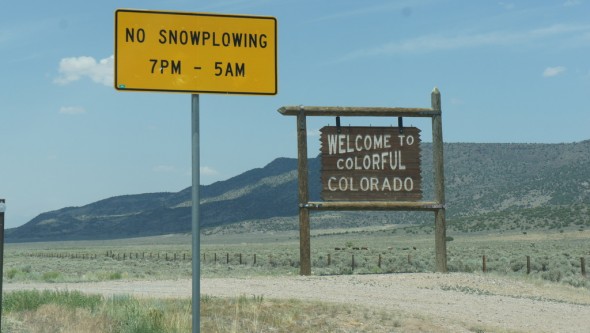 Highway 159 eventually runs into the mountains atÂ Fort Garland.Â  A right hander onto Highway 160 to head towards I-25.Â  50′ after the turn… 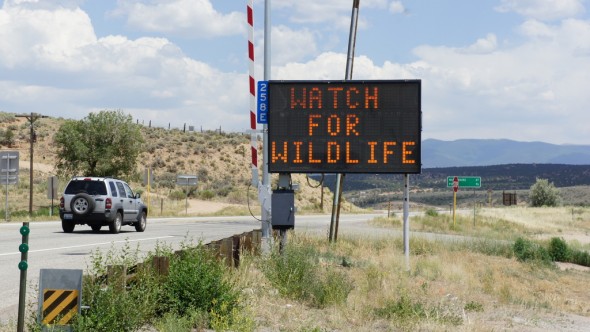 All bad, no good

The drive ended up trouble free and no fires were seen in the mountains getting us to the main interstate.Â  From the beauty of barren mountains to the forests of CO. 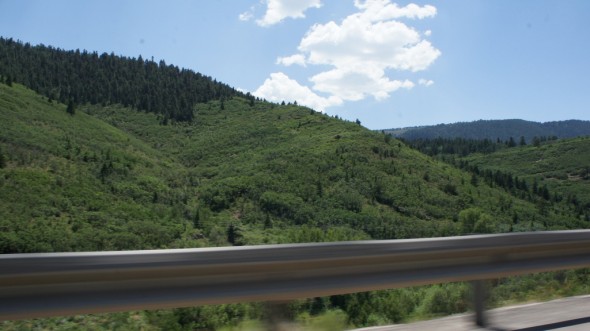 And then this.Â  10 miles from our exit and off in the NW distance is a ton of smoke bellownig off the mountains.Â  Fire started Saturday morning and there have been several fires started by an arsonist.Â  They local chit-chat is that this too was started by an arsonist as there isn’t a natural cause for it to have started.Â  I had that bad feeling that the fire was going to drastically change our plans for Sunday and my fears were confirmed once we got to Joel’s place.

My buddy Nick had suggested taking a trip up through Independence Pass and then up to Vail before hitting I-70 back towards Denver.Â  I spent some time looking up routes and the pass itself.Â  Highest paved pass in Colorado and the pictures I found were amazing.Â  Plus it turned an hour and a half drive into seven which was fine by me!Â  Unfortunately the fire is right were we need to go and is closed.Â  And we have plans tonight and can’t turn a seven hour drive into an eleven hour drive to backtrack south and attempt to get there another way. 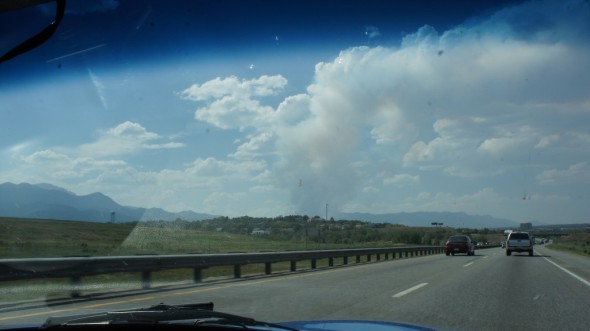 Arsonists Should be Burned at the Stake

We had a great time with Joel and his wife and Colorado Springs is just small enough to run into people you know.Â  Met a friend of his at dinner and some of the neighbor’s came over for desert later that night.Â  It was a lot of fun and we’ll definately be back this winter to enjoy the snow!

Finally, my wife brought me a surprise for our trip.Â  We play a lot of cribbage and most of our boards are too large for travel so she went onto the Jack Daniels website and ordered one from them.Â  It is an actual plank from a barrel and the pegs are actually the nails used to hold the planks together.Â  That’s it for Friday and Saturday.Â  Waiting for a load of cloths to dry and we’re outta here!Â  Going to cruise around Colorado Springs for a while and then head up to Denver. 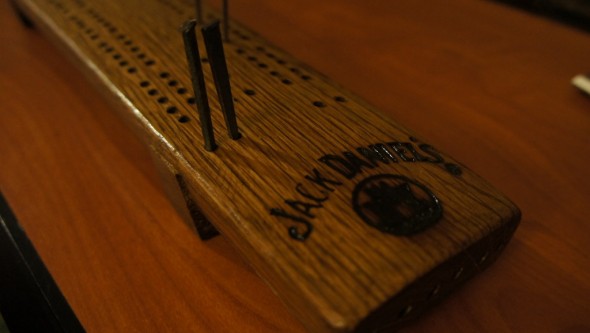 My wife is awesome.Â  Have I mentioned that?Â  She again chose Flipper over an airline ticket home and suffered through another blistering day from Colorado Springs to Denver.Â  But by the early evening we finally had a thunderstorm come through northern Denver and the clouds even teased us with just enough rain drops to expose every spec of dust.Â  But that was later!Â  First we hit a few cool spots in Colorado Springs.Â  Unfortunately the forest fire is really causing a lot of havoc in the area.Â  If I remember correctly, by Sunday evening 11,000+ people had to be evacuated.Â  Really a shame.

We first hit up Seven Falls.Â  As those over 12 might surmise, it is a set of waterfalls comprised of seven individual falls.Â  Really pretty area and we’d highly recommend it. 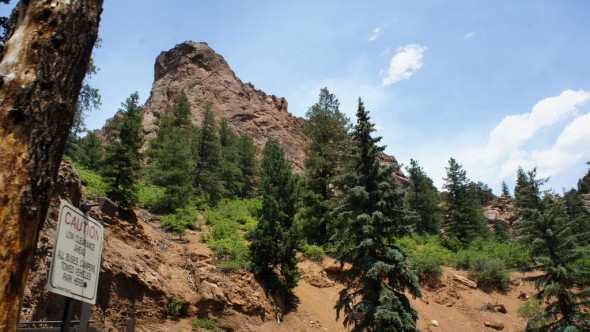 One of Many Vistas at Seven Falls

Theoretically, I’m not against walking up 285 stairs.Â  In theory.Â  But really, why?Â  Only if the elevator is broke is my mantra. 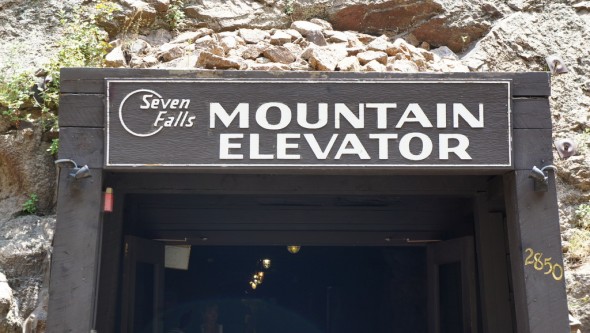 Mr. Otis is a god Amongst Men

Yes, there really is an elevator that runs through the middle of the mountain to get people to the top. 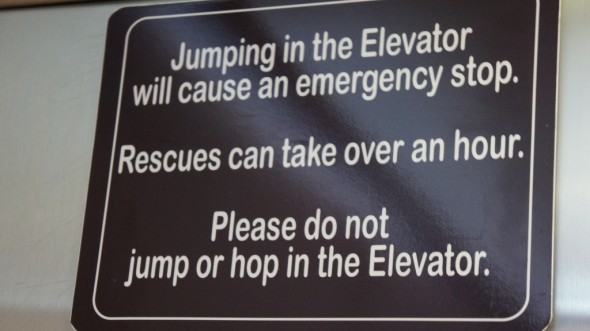 I was sooo tempted…

The view from the top is nothing short of spectacular.Â  We spent a good part of an hour just taking it all in. 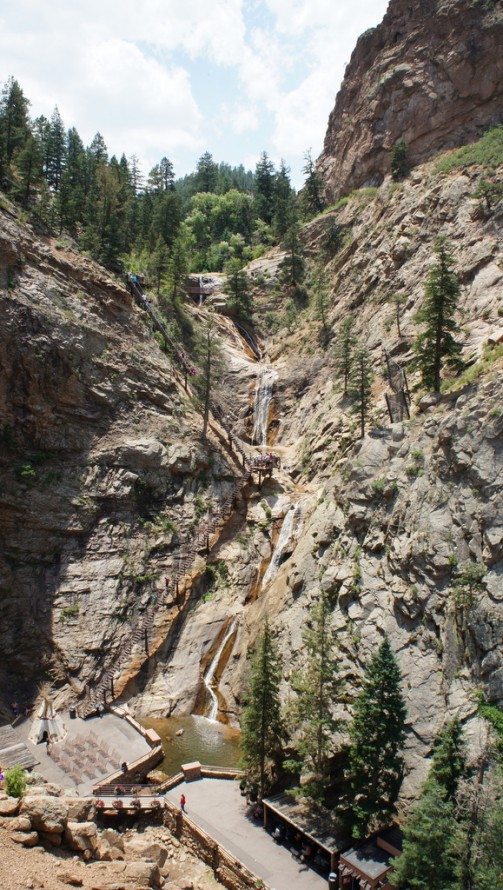 After that we headed for Helen Hunt Falls.Â  She’s a famous author and her original burial place is on the mountain to the left of Seven Falls. 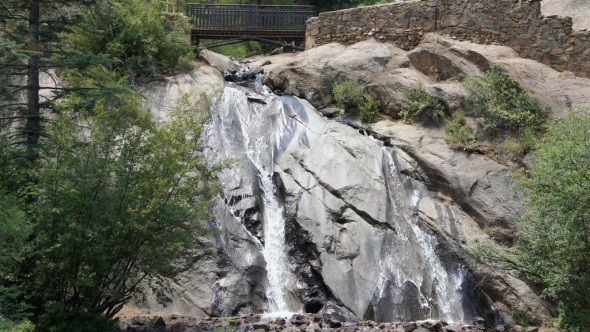 Definately the kind of place you could find yourself sitting and listening for hours on end.Â  Unfortunately we had to leave Colorado Springs much sooner than we’d like to.Â  One more stop to the most hated artist in all of Colorado Springs.Â  This guy has made a bunch of sculptures for the city; however, once he decided to redo the decor of his own property, fit hit the shan.Â  Neighbor’s began complaining about all the traffic going by their house to see his house.Â  At one point City Council was involved and it was a huge mess. 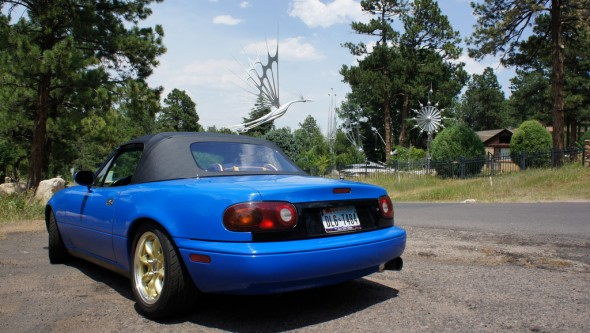 I Would so Live Here 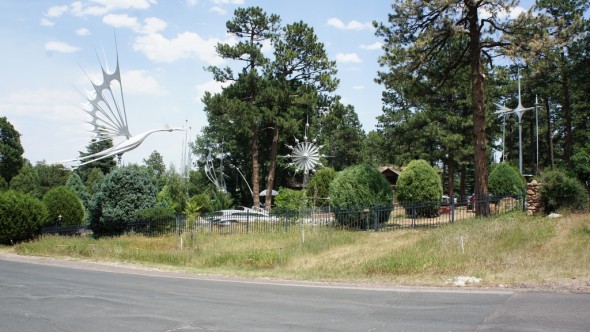 Bird Rotates in the Wind

Dumb luck?Â  We just happened to be there snapping a few shots when the artist himself came out into the yard.Â  He was prepping something and had ear protection on and couldn’t see me wave.Â  So I just drove up to the property line and gave him the ‘thumbs up’.Â  He took off the ear protection and talked with my wife and I for a few minutes.Â  Nice guy and thankfully the woes of the past are behind him and he referred to it as, “old news”.Â  Which was great news to us and we headed out of Colorado Springs and onto Denver.

It’s all downhill from here!Â  The northern most portion of this two week trip finds us in Erie, CO.Â  The drive from Colorado Springs to Denver was very similar to most of the other legs of the trip sans wilderness.Â  Hot as hell and with the added bonus of mass amounts of traffic given so many routes were closed from the fire.Â  Ugh. 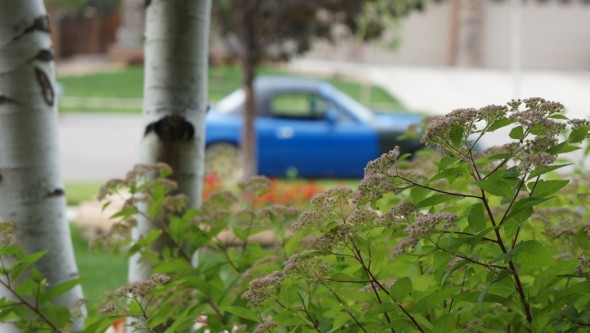 We were, however, rewarded for all our efforts with a great evening with friends and an amazing home cooked meal.Â  Cedar plank salmon with all the fixings.Â  Just when we thought it couldn’t get any better the clouds rolled in and for the first time in over a week we got to enjoy sub-100 degree temperatures during daylight hours. 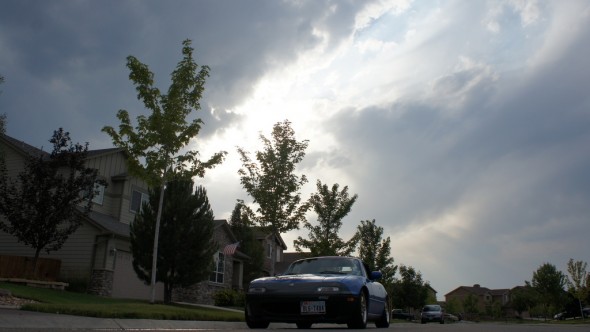 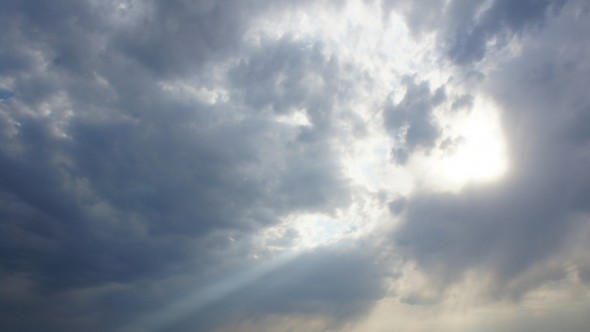 We stood on the deck and let the winds and rain wash away the last of the long hot day.Â  Monday and Tuesday are again going to be a blend of work and play before dropping my wife off at Denver International on Wednesday morning.Â  Then it’s back to Albuquerque for a few days of drives, dining, and drinking with Steve and Adam.Â  See you in a few days!

The Drive Back to ABQ

Wednesday wasn’t Hump Day for me…Â  Wednesday was the National Haul Ass Day.Â  It’s all I did and I did it all day.Â  Remember that whisp of smoke on the mountain from our journey up to Denver?Â  Yeah, well now not so much.Â  11,000+ people evacuated and I-25 was actually closed in Colorado Springs Tuesday night.Â  For those that got held back a year or two in school, I-25 runs between Denver and Albuquerque.Â  Which means if it’s closed I’m going to need a compass, pup tent, jerry can, string, Rambo knife, and a snare.Â  Oh, and 4-wheel drive.Â  It really is I-25 or bust.

Did not want to even muster the 5 cells required to blink, let alone actually put kinetic energy into motion.Â  Wanted to just spend the life I have left laying in bed with my wife.Â  Alas, we could not.Â  Got her to the airport and spent some time looking at other routes to ABQ that don’t involve things like, “Welcome to Idaho!”Â  Got a call from my buddy Joel and I-25 is open.Â  For now.Â  Minute by minute.Â  I’m over an hour out.Â  GO FOR IT!Â  Filled up with gas and yep, hauled ass! 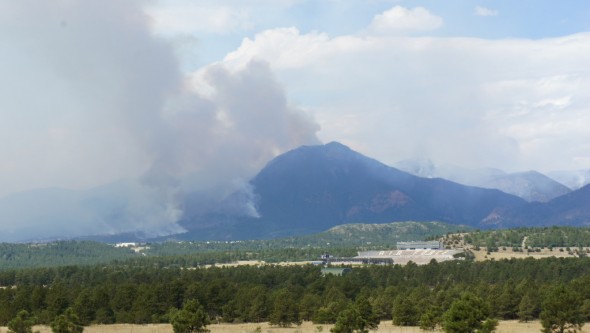 Since this is an auto forum and not a sagebrush forum, you’ll forgive me for not taking many shots on the way back to ABQ.Â  I promise if there was even ONE thing to see I would’ve taken a shot.Â  The only thing of interest was about 40 miles north of the NM border… 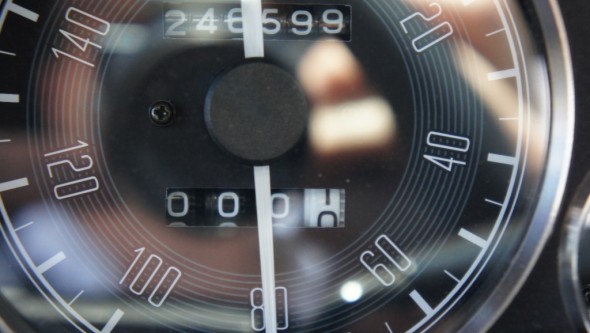 Made it ABQ in one piece and the new radiator worked as advertised. 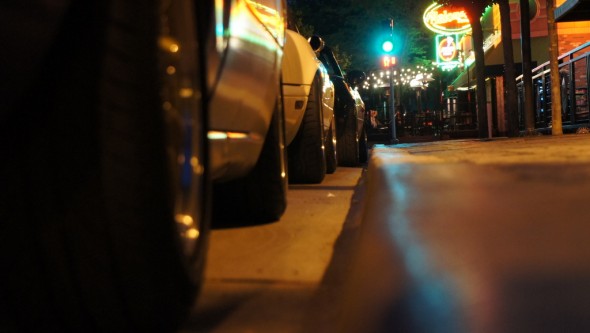 2 Responses to “Guest Blog – To Denver and Back!”