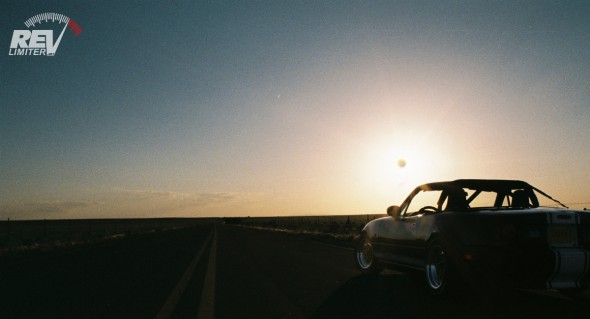 My hometown of Albuquerque was apparently the premier place to watch the May 2012 annular eclipse. The path of maximum coverage passed right through the city and full coverage (97%) was set to happen very near the horizon. Photographers came from all over the country to catch it.

So yeah, of course I wanted to shoot my car under this sky.

Me and my buddy Alex, a fellow photography geek, went out to a usually-empty road to nowhere and set up a bunch of cameras. A bunch being five. I threw a few orange cones in the back just in case other cars might happen by. And holy crap… were there ever “other cars”. There must have been several thousand cars stretching across the mesa. Fortunately, none wanted to park near Sharka and I was able to get this nice, clean road.

A little bit about the shot: I used my trusty Nikon F3 loaded with Fuji Reala 200 film. I chose a Nikkor 28/2.8D autofocus lens in hopes of catching a nice sunburst. Costco developed and scanned and I photoshopped it ever so slightly to bring out some details in the car and give it a wide crop. I don’t remember the exact exposure settings beyond f/16 for the aperture. I set it for -2EV on the dial and shot on auto.

I gotta add, cruising home under a partially eclipsed sun was fantastic. It was a slow cruise due to the thousands of people pulling off the shoulder and also trying to make their way home, but that didn’t matter. It was still magical.