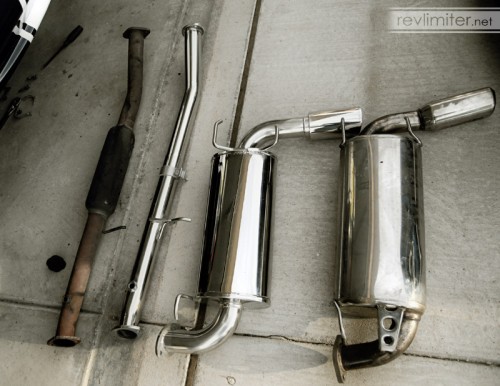 My poor Racing Beat exhaust. It is literally “beat.” It survived my crazy wreck. Well…. kinda. It got good and dented. And I chose to beat it back into shape rather than get a new one to settle me till the turbo came. You can see the ding in the can (far right). It’s very minor now. A year ago, it was much deeper. It seems to have popped out a bit by itself. 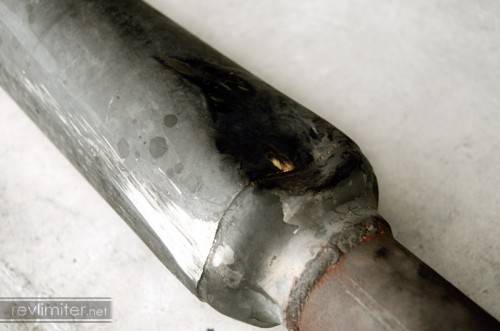 The midpipe didn’t fare as well. I had to bang it a lot to make it fit around the stock rear brace. It ended up a nice triangular shape. And it ended up getting a lot louder. RB is known for being nice and quiet. Not mine. It’s not overly loud, but it’s not at all quiet. I’m looking forward to getting rid of it in favor of the FM 2.5″.

Why did I choose the 2.5″ over the 3″? Well…. I don’t have a good answer. It was a little cheaper. But more than that, I’ve heard one in person. It’s nice and quiet. That appeals to me. There are reports of the 3″ being louder. Which is fine. But for now, just starting out with the turbo, I wanted something a little quieter. 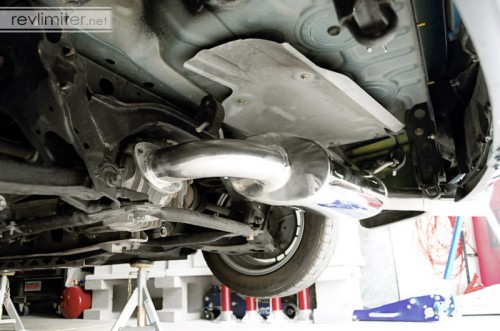 The FM can is nice and small.

The muffler is the exact same length as the RB Powerpulse (read: as long as possible) but it’s not as thick. Which is totally awesome. The RB lived right next to my trunk. Hardly a half inch of space separated the can from the trunk floor. And that trunk got HOT on long drives. So yay for more space. 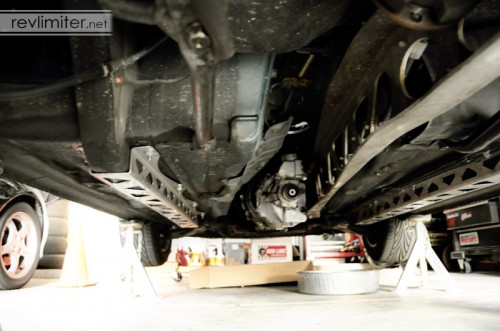 After 15 years, my drive shaft was getting a bit tired and clanky. That’ll be swapped out for my aftermarket one with replaceable joints. And I’m thinking of swapping the 95 transmission (39k miles) for my 97 (130k miles). The 97 just shifted so much better. The 95 gets kinda hard to shift in cold weather. Not sure on this yet…

Anyways, time to get out the engine hoist! 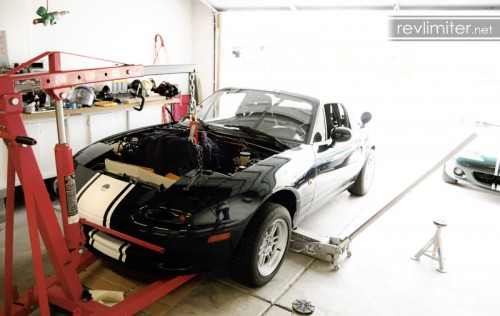 For anyone who’s never done this, I have two words. Load Leveller. It is worth whatever your local tool store is charging. 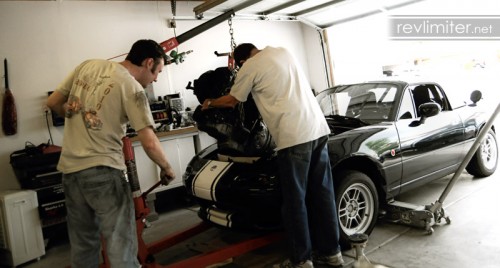 It’s really much easier to pull an engine with an assistant. I called my dad and he zipped over to help. He was quite amused by the Miata engine pulling process. Thanks for the help!

This photo is courtesy of my turbo engine. It (and the engine stand) held the camera while we pulled the motor. =) 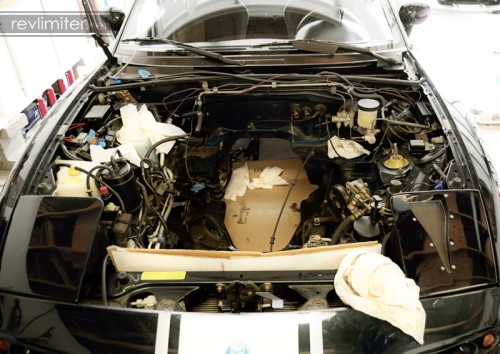 My home for the next few days.

Yes. My next few days will be spent standing right there. Cleaning. I bought two cans of degreaser, a fresh bottle of Simple Green, and a ton of blue shop towels.

Seriously, this is maybe the best part of the project for me. I can let my OCD flow freely and clean to my heart’s content. 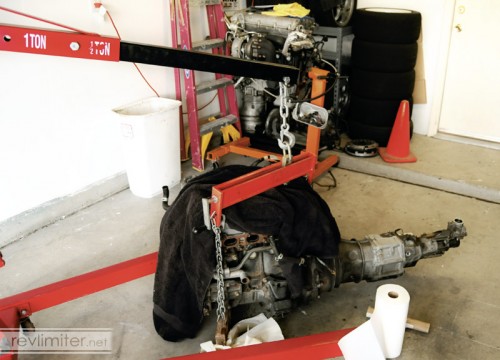 It’s gonna be a spare. 15 years of running was enough. Time for a nice break for this little guy.

More to come soon! Hopefully of a turbo motor being plopped back in the bay!