Bras Are the Devil, Mkay? 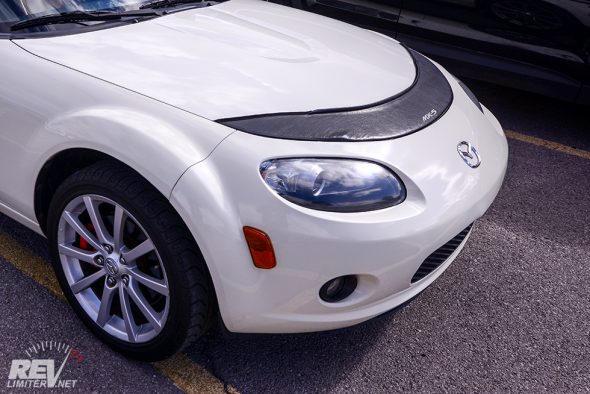 Doesn’t look evil, does it?

When I bought the Stormtrooper, I noticed the little hood bra. Not bad, right? That’s what I told myself anyway. It wasn’t a full bra. Just the hood. And not that much dirt gets trapped on the hood right? 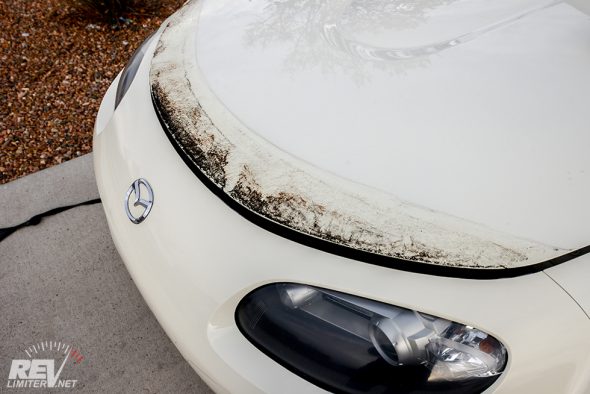 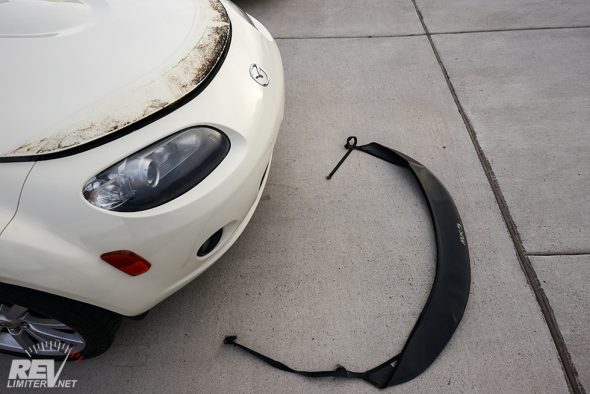 Get behind me, Bra.

Seriously, can we all just agree globally to abolish car bras? They’re the devil.

BRAS ARE THE DEVIL! Just say no!!!

Who knows how long this thing has been on the hood. Years? 9 years? The rich black soil underneath makes me think it must have been from the original Florida owner. 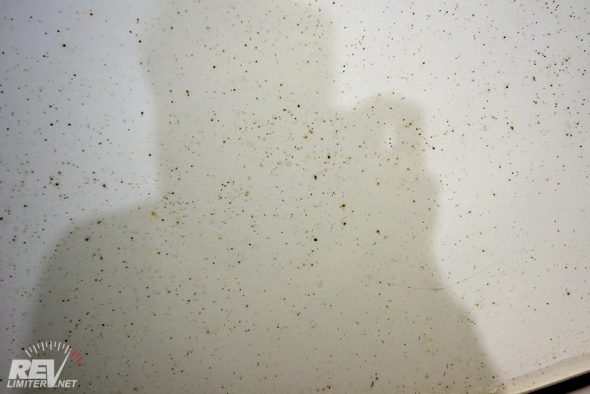 This is after washing the dirt off. Yes. THIS IS THE CLEAN VERSION!

Sand, dirt, rocks, and other contaminants were embedded in the paint. Just totally in there. No amount of washing was going to get it cleaner than this. 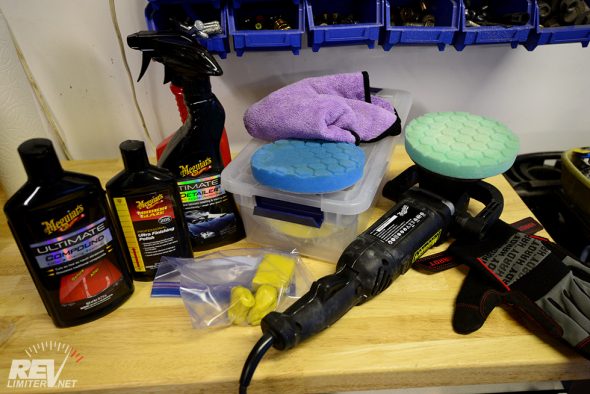 When I got Sharka painted, I learned a lot. Like. A LOT. So much. My knowledge of detailing and paint care increased exponentially.

I’m pretty good with a DA buffer now. I can even run a non-orbital polisher, though I prefer to leave that on the shelf unless really needed. But I can buff a whole car with decent skill. It’s all in the tools and being shown how to use them.

But this job required clay. 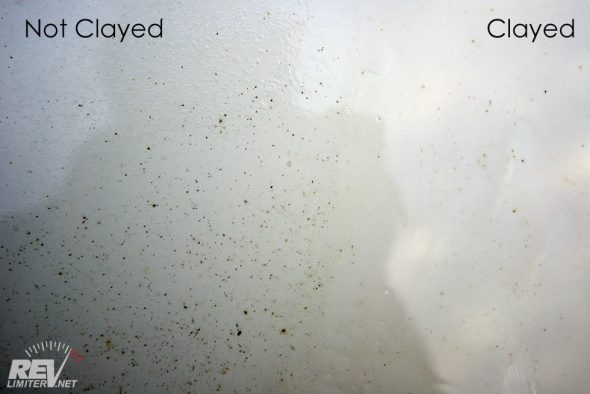 Clay is the opposite of buffing. Clay lifts contaminants from the paint. Buffing mows down and flattens paint. Clay cleans shit out of the paint.

Both were needed for Stormy’s poor hood, but clay needs to come before buffing. 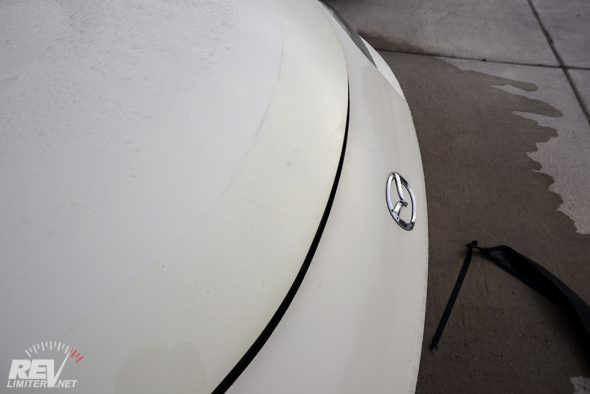 Here it is after claying. Not perfect, but way way better.

A few words about clay. In my opinion, clay is clay. If you’ve got a fresh (non yucky) bar of clay, you’re good. No sense spending a lot on fancy clay. It all picks up contaminants the same. Spray on some quick detailer over clean paint (or even just soapy water) and clay the heck out of it.

Feel along on the surface with your empty hand while you clay with the other. You should feel clean, smooth paint. 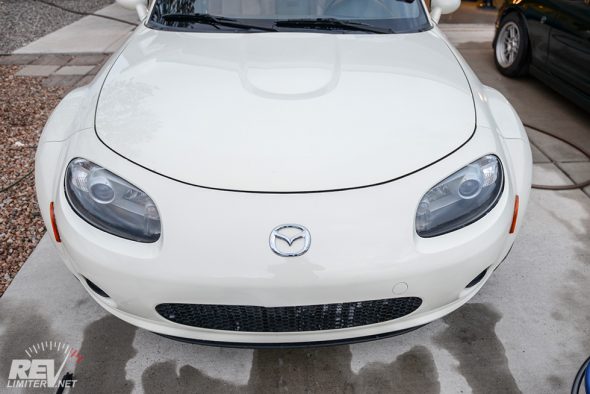 Then I buffed. Sorry to have not taken a pic. I was fighting to stay ahead of the sunset.

I’ve got a Meguiar’s DA buffer and like Chemical Guys pads. I used a green one (sorta aggressive) on this at about 5000 rpm. I also used Meguiar’s Ultimate Compound. It’s not too aggressive and seemed like a good place to start.

I plan to give it a 2nd round of buffing when I have time to wash the whole car and then get some wax on the paint. But that’ll come a bit later. This was just an emergency fix of that horrible paint under the bra. 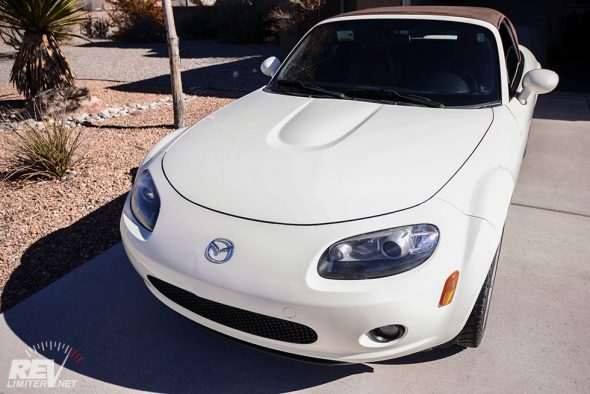 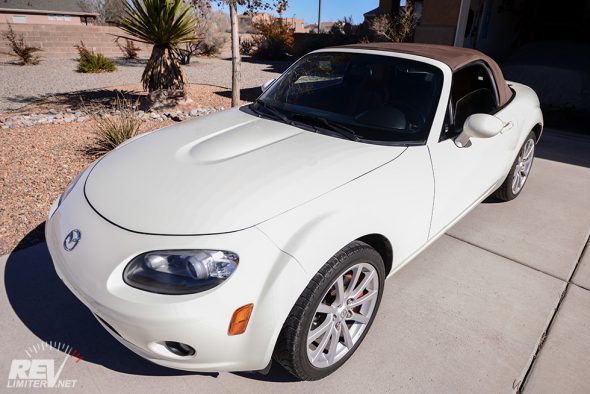 In the shade, you can see a bit of color difference between the bra-damaged paint and the rest. It’s a bit more of a cream color in the bra section. In direct sun you can’t see that at all.

Now to burn that awful piece of vinyl in a bonfire somewhere.