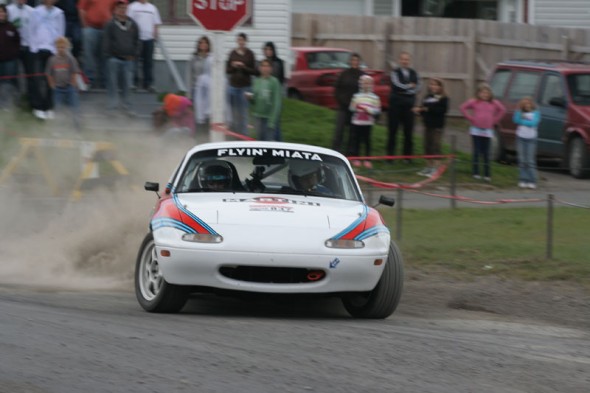 They have posted about this on most of the Miata message boards on the internet, but I thought I’d do my own small part at helping spread the word. This blog gets around 20,000 page views per month according to Google Analytics, so maybe this entry will reach a few eyes that had not yet seen the forums.

Some of you might remember that I ran the Targa Newfoundland back in 2008 with Flyin’ Miata as a sponsor. Well, for 2011, Flyin’ Miata has entered a factory team. Really factory, we’re entered as a manufacturer and will be running against Dodge, MINI, Kia, Mercedes, Audi or whoever shows up this year. By the way, I managed to beat the factory Dodge and MINI teams in 2008

It’s going to be a bit different this time around. The rules have changed, and there is no longer any handicapping in the Targa division. So we’ve decided to step up to the plate and go for the big price. The Targa Miata from 2008 will be reworked as an Open class car, running for the overall victory. The big change is going to be under the hood. The high compression 2.0 is coming out and a high compression 5.7 (or 6.0) is going in. The car has the handling, now it will be able to vaporize straights. I’ll be driving this car again with my wife Janel returning as navigator.

We’re also bringing Elvis to run in the Touring class. This is a class for street cars, so we’ll be leaving in the leather interior. The purpose of Elvis will be to show the world how fast a street car can be without giving up any comfort. Bill Cardell will be driving, and his navigator has yet to be announced.

However, we need your help. We simply can’t afford to do this alone. We’re searching out sponsors and several companies have already stepped up. ASF Machine will be building the engine for the Targa Miata, V8 Roadster is providing the conversion parts and Hard Dog supplied the safety gear. But we’d like to give all Miata enthusiasts a chance to be part of the team.

We need to raise at least $10,000 to make this happen. If we can’t hit that target by March 11th, we’ll pull out of the race – that’s the last day we can back out without a major penalty. If we only get partway, we may choose to just send the Targa Miata to compete for the win.

We’re asking Miata fans to help out by pledging their support. Join the team and make a donation. If we hit our target, every cent will go towards the costs of running the race: entry fees, car transport and event costs. If we don’t and we have to back out, we’ll simply delete your pledge and we’ll never charge your credit card. This is basically the same way we run our group buys.

Depending on how much you pledge, we’ll make sure people know it. Everyone will get acknowledged on our website, even if we’re not able to go. We haven’t designed the special T-shirts yet, but we’ll make sure they’re super-cool ones you can wear with pride.
Fan (up to $50)
Team member ($50 or more) – get a limited production team member T-shirt that identifies you as one of the coolest Miata people around.
Patron ($500 or more) – limited production T-shirt only for patrons as well as your name on the cars.
Sponsor ($1500 or more) – get your name/business prominently displayed on the car and in all media communications.

As you can imagine, we’re pretty excited about this. 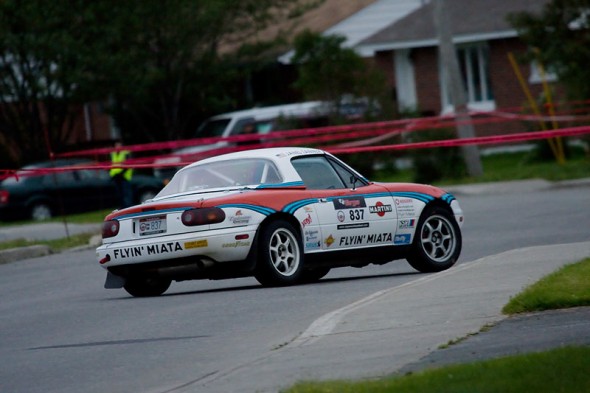 Flyin’ Miata is responsible for Sharka being as much fun to drive as he is. Their FM2 turbo system is at the very top of my “most favorite mods ever” list. And their support during my installation was beyond outstanding. So, when given a chance to repay the favor and support them, I jumped. Me and Sharka are in as Team Members for the 2011 race! As you can imagine, Sharka is very excited.

If you’ve read this far, you must also be an FM fan. You should pledge a few dollars. Give back a little to a company who has given joy to so many of us Miata enthusiasts.

Good luck, Flyin’ Miata! We’ll be cheering for ya!

FM has reached their $10k goal! Keith of Flyin Miata posted this morning:

San Diego Miata Club and the Roadrunner Miata Club both came together to help support the team. Matters Of Grey also joined us as a sponsor.

This puts us over the $10,000 minimum! A big thank you to everyone who’s signed up so far. While there have been a few big contributions, the majority of it was via individuals pledging $50 towards the team. We have over a hundred names on our list. I’m very proud of the Miata community, the response was better than I’d hoped.

Our minimum was just a minimum, though. That means we can commit to sending a two-car team. Any further support will allow us to represent the community better, with the ability to take better video, provide more timely uploads during the race and feed the support crew We’re going to keep looking for sponsors big and small.

To the Miata community: Well done!
And to Flyin Miata: Go kick some ass!