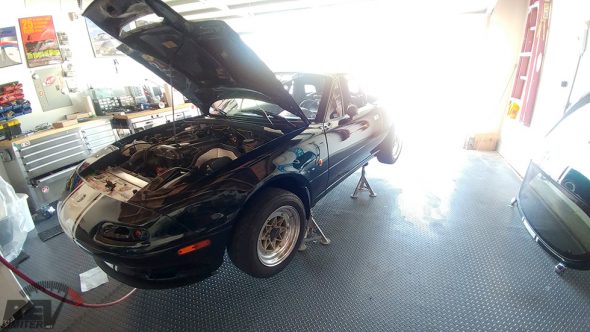 The last project in my old house.

Gas fumes. Can I get a group UGH and eyeroll please? Gas fumes in NA Miatas are SOOOO annoying. I’ve been trying to solve this problem permanently for over a decade. I blogged about it back in 2012 and had been working on it for years at that point.

I finally fixed it!!! 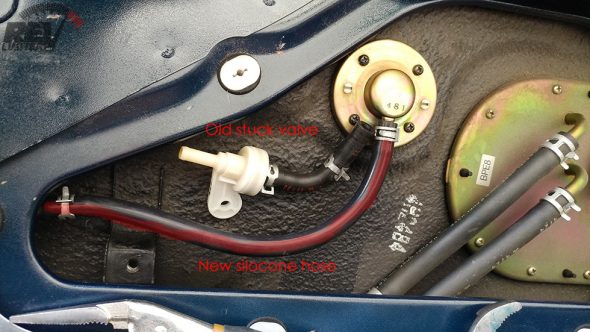 After my trip to Grand Canyon and Bryce with my daughter, I went on a mission tearing things apart in Sharka to fix the gas fume problem. In the heat of the summer and with the huge elevation changes, the fumes were really really bad. Happily, not so bad when driving but if we stopped for even a minute, they would start to creep into the cabin.

So I started investigating once we were home and Sharka could be on jack stands for a few weeks. I started by popping a hose off the charcoal canister (evap expansion tank) and pressurizing the fuel tank manually with some compressed shop air. Not a whole lot of pressure, just a few puffs from the air gun so that I could hear the tank expand. Then I held the hose to my hand (or cheek, lol) to feel the pressure escape.

Nothing. No pressure ever escaped.

Suspecting I had a lot of crud built up in the hardline between the evap tank and the fuel tank, I opened up both ends of that hardline (the other is right near the tank) and powered a huge amount of pressure through it with my air compressor in both directions.

This hard line cleaning didn’t do much for me and almost nothing was jammed in that line. A few specks of dirt came out of either end, but air flowed freely through the line all the time.

The only other things between the tank and the charcoal canister are the rollover valve and that little white check valve. As it was the easiest next step, I swapped a piece of straight hose in place of the check valve hose and reconnected the hard line.

I pressurized the tank as before. The tank expanded audibly. Then I released the air gun and… THE TANK RELEASED PRESSURE.

So the failure mode of that little valve – WHICH IS SUPPOSED TO RELEASE PRESSURE – is to not ever release anything and become blocked. Cleaning it lasts for a few months to a year and then it is back to its previous dangerous behavior.

I deleted the valve permanently and used a piece of silicone hose instead. And I did this months ago – back in August 2018. I’ve been sitting on this post since then, driving around and making sure the pressure didn’t return.

CAUTION! This may not be a good solution. I’d suggest sourcing a new valve from Mazda and replacing the old one. 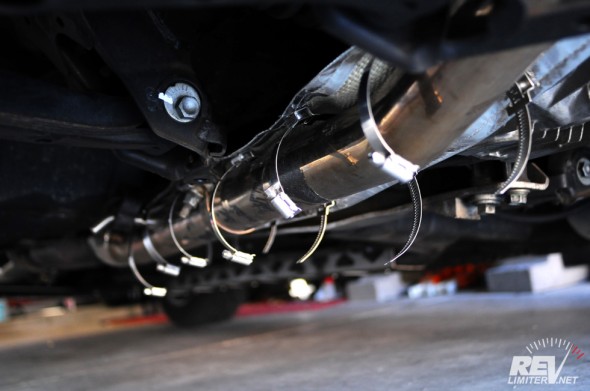 I installed this heat shield back in 2012. It’s still installed and doing great, but I’ve augmented it with some extra shielding… 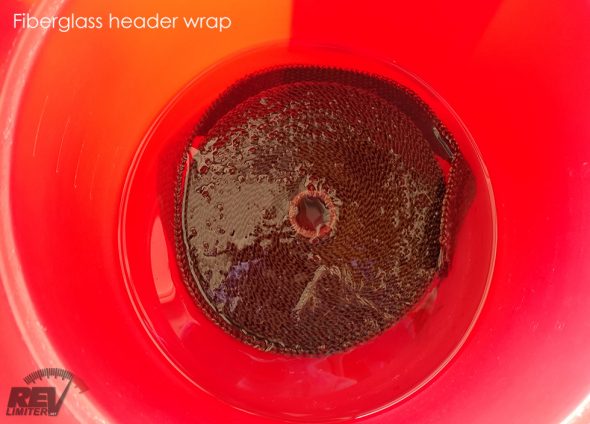 A bucket of header wrap. 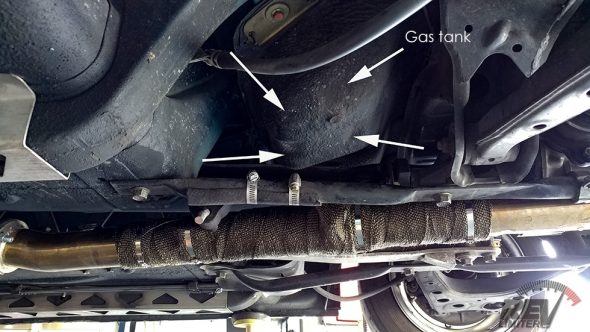 It might be a belt-and-suspenders situation, but it seemed like a bit of header wrap couldn’t hurt. It’s inexpensive and extremely helpful at keeping heat inside.

Not much to installing this stuff. You wet it down, then wrap it around something and secure with metal zip ties. And you wear gloves because OMG you get itchy otherwise. Fiberglass gets EVERYWHERE! My gloves self destructed after a few minutes and I, like an idiot, didn’t get a fresh pair… and I still remember the itching months later.

Anyways, the reason for doing this heat shielding is to keep as much heat from the fuel tank as possible. Heat rises and the gas lives directly above the back exhaust section. Mazda gives you nice heat shields attached to the factory exhaust… and aftermarket exhaust don’t come with those.

It helps. I’d suggest this to anyone. But changing that broken valve out is far more important. 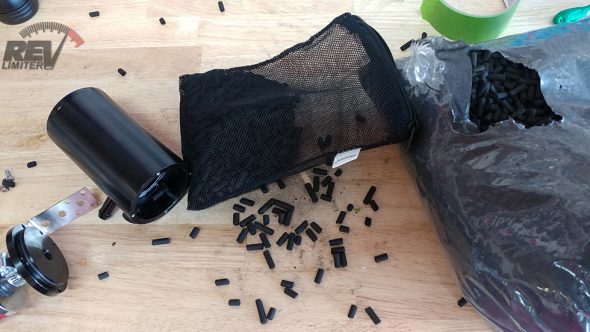 A neutered catch can… 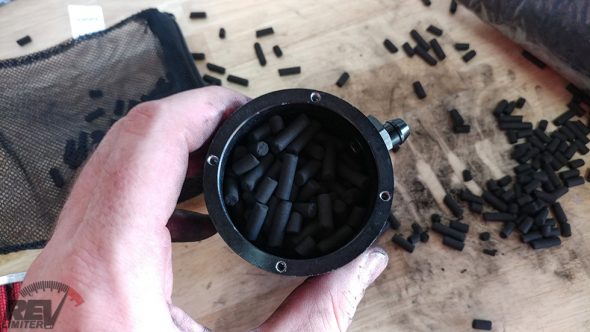 My last possible solution to the fume problem – getting rid of the 20+ year old EVAP tank. My thinking is this – charcoal breaks down like everything. It gets saturated. Surely after this long, the evap canister in Sharka isn’t doing a whole lot at trapping vapors.

The catch can and charcoal both came from amazon. I’d link but the products would probably be dead in a year or two. Best to just search from either and find one that suits your needs.

See, it’s metal. And it can be opened and closed as often as you want. And it has three valves just like the OEM charcoal canister. And it’s way cheaper than any OEM or aftermarket actual dedicated (and sealed) charcoal canister. A catch can seemed perfect. 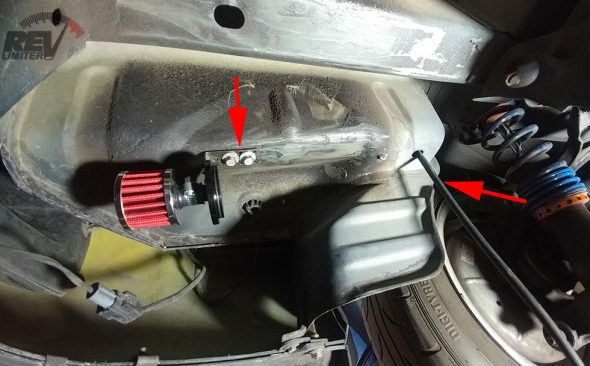 Mounted behind the rear wheels.

In my evap tank research, I discovered what racers do with the line – they run a hose behind the wheel and let it hang. Sometimes there’s a small filter added to the line in case the tank expands and sucks in some air. And this has a lot of benefits – it gets the fumes BEHIND the cabin as you’re racing around a track. It gets fumes away from the hot engine. It’s a really nice solution.

So I put my little charcoal tank behind the back wheel mounted to the frame. 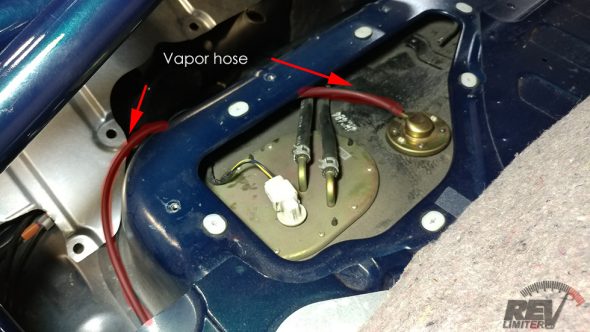 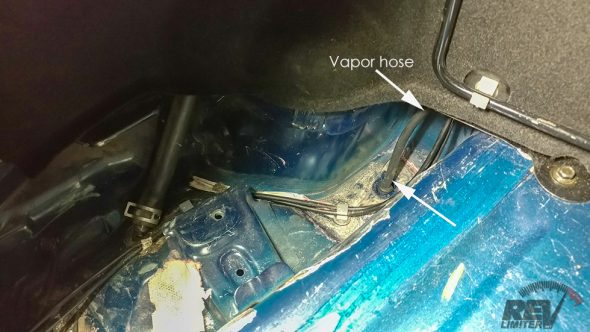 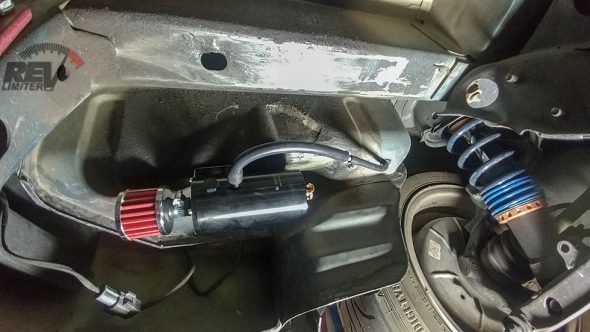 The downside of this setup – fumes aren’t ever sucked into the engine and burned.

The upside of this setup – fumes aren’t ever noticed. Ever. Not while driving. Not while being parked. Nothing at all in six months!

Honestly… I’ve not had any bad behavior with gas fumes or tank pressure since doing all of this. The problem has been completely solved.

I hope the helps some folks out there. If you need more info, just leave a comment below.