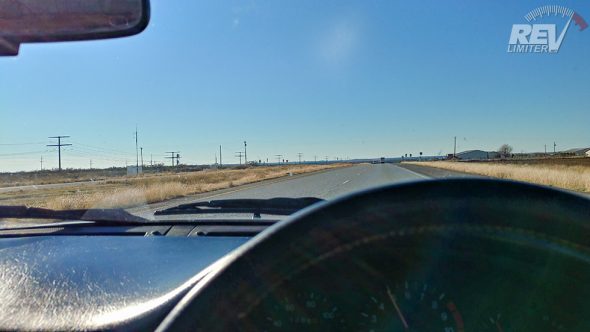 So, where was I? In Dallas I believe. According to Google maps, it would take me 9 hours 45 minutes to go from Dallas to Albuquerque in my new Cappuccino. And I was leaving Dallas after 11am anyway. I wasn’t in a hurry.

I spend most of my life in a hurry and it’s a rather bad habit. I try to make up my customers orders as fast as I can so they don’t have to wait. I rush through midday meals to get back to work. I hustle family out the door for shopping trips. I don’t take much time for myself… ever.

I hurry a lot.

Since the tiny car was gonna be pushing 5000 RPM on the freeway for over 9 hours, I made the purposeful decision NOT to hurry back. I’d stop early and often (and the 6 gallon fuel tank required that anyway) and I wouldn’t even try to make it home in one day. 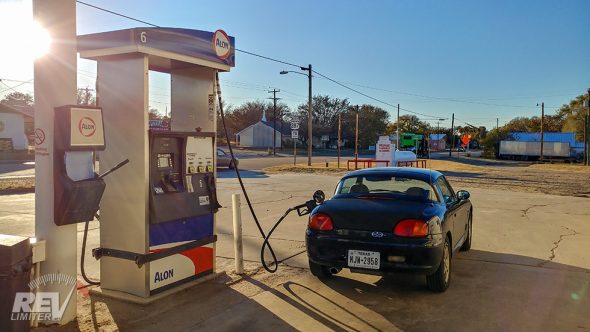 I stopped every 100-150 kilometers. That’s OFTEN. That’s not even reaching 100 miles most fuel stops. And that’s okay. I usually put in between 1.7 to 2.3 gallons each stop… which is hilarious. The little car was getting around 40 mpg with the engine screaming along at 5k and the A/C running.

I checked the oil level obsessively at each and every stop. And each time it was at exactly the same place as the previous stop. The Cappuccino used zero oil on the whole trip. None.

I got a good little car. 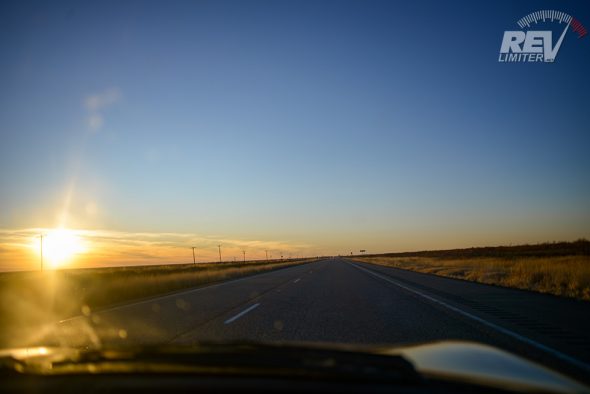 Before leaving home, I figured out a number of places I could stop on the drive back. If the car was just a basketcase, I could go to Wichita Falls, under 2 hours outside of Dallas. If things went well, I could make it to Amarillo and spend the night. And if I really pushed it, I could stay on old Route 66 in Tucumcari NM.

The sun set just as I was pulling into Amarillo. I hit the headlights annnnnd… nothin. No light on the road. No visible illumination in the gauge cluster. Nothing at all.

I pulled off the freeway at the first possible exit while trying not to have a panic attack. 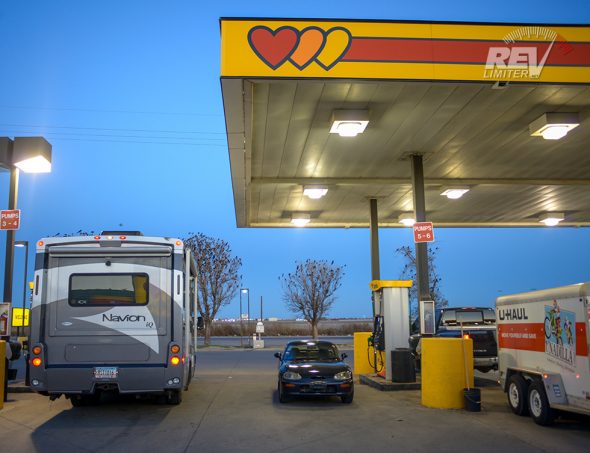 There was a truck stop at the panic-exit. I lept out of the driver’s seat to look at the Capp’s nose. The lights were indeed active, they just didn’t really do much in the way of lighting the road in front of me. Tail lights worked as well.

Yay! Lights! No problems then. My panic died down. I just needed others to be able to see me. I could cruise behind a truck caravan and get down the road in relative safety that way.

As night fell and twilight burned away, I could finally see the lights in the Capp gauge cluster. And I take back every bad thing I ever said about the dim NC gauge lighting. Compared to the Cappuccino, the NC gauges have little suns in the cluster.

The Cappuccino gauges are profoundly dark. You *can* see the gauges when it’s pitch black, but… barely.

And my Cappuccino does have working headlights that DO actually generate lumens. They’re just profoundly badly aimed. One light aims nearly straight down about 10 feet in front of the car while the other light aims up and sideways at an angle. I will fix the light aiming once home, but it wasn’t something I could get to on the trip.

My plan of cruising behind trucks worked fine. We drove in comfort and at a slightly slower clip than during the daytime. No problems to report.

Tucumcari was calling. I pushed on for the extra 90 minutes. 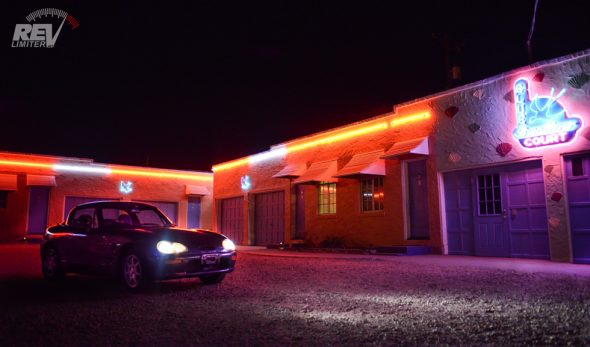 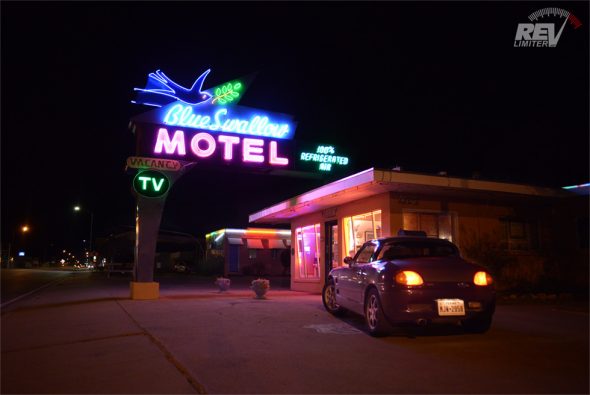 aka The Cozy Cone.

Ever heard of Tucumcari?

A better question is probably – Ever seen Pixar’s Cars movie? Lightning McQueen stays in a small town called Radiator Springs which is heavily depressed due to the freeway bypassing it and Route 66 being closed.

While based on many small towns along RT66, Radiator Springs takes a lot of inspiration from Tucumcari.

The little hotel Lightning stays at, The Cozy Cone, is directly inspired by The Blue Swallow in Tucumcari. It has 12 rooms with attached garages. It was, unfortunately, closed for the winter while I was there. But the neon was still lit and the hotel was beyond beautiful. 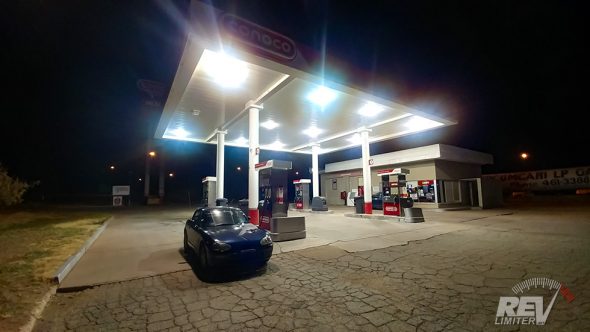 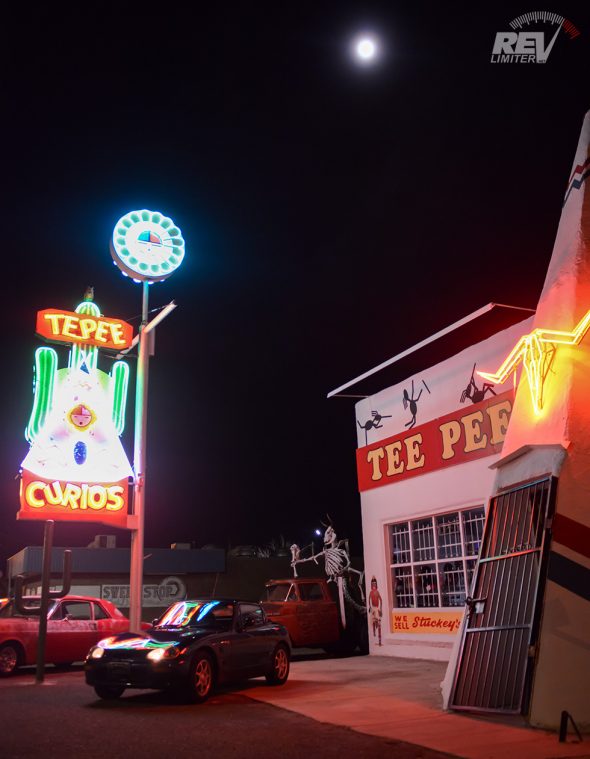 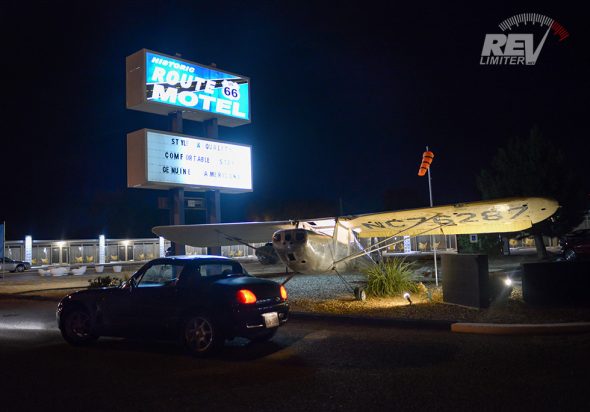 Tucumcari, while beautiful, is extremely economically depressed. For every beautiful neon building, there was a half dozen closed and abandoned ones. I could see these building juuust well enough with the weak Cappuccino’s lights to note each one for photos in the morning.

Since the Blue Swallow was closed, I drove the Capp through town a bit and stopped for a final fill-up of the day while deciding where to stay.

Note – it was a Saturday night at about 6:30 local time. Me and Cap were the only ones at this particular Conoco. The station was even closed, but it had a brightly lit sign proclaiming that the pumps worked 24 hours a day.

The pumps were molasses slow. The 2 gallons took about 5 minutes to fill. During that time no one so much as drove past.

Everyone was on the freeway going around this beautiful little town while hurrying to their destinations. 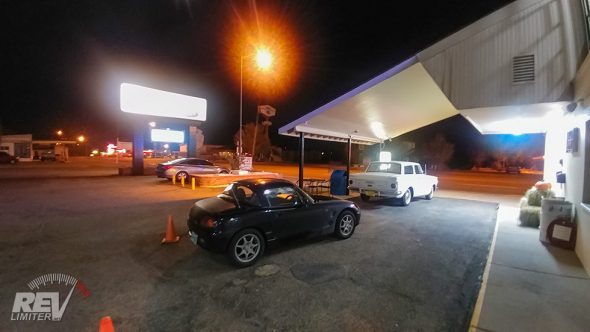 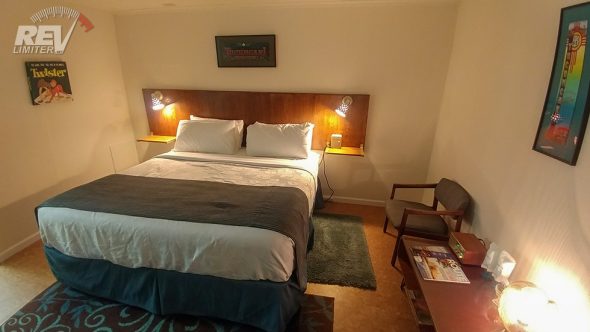 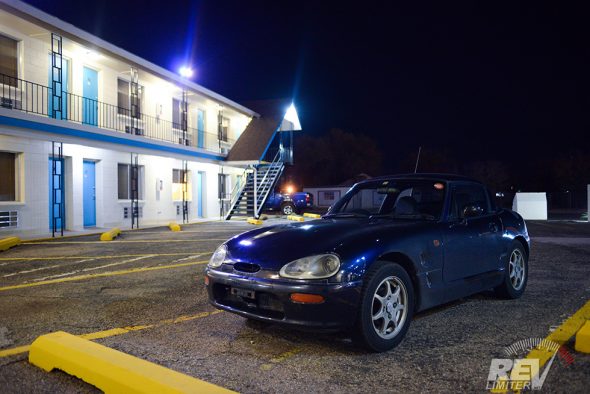 Cap’s spot for the night.

After driving up and down the Tucumcari stretch of RT66 a couple times, I settled on The Roadrunner Lodge as the coolest place to stay in town. My night photos of it are sadly lacking, but it just oozed charm and comfort.

And it had a badass Rambler parked out front. Cap and I checked in and slept the sleep of the victorious.

Yes – “Cap.” The car named himself that night. See, I kept obsessively checking the oil every fuel stop. And on each and every stop, the oil level was at precisely the same spot on the dipstick as the previous check 100 km ago.

That last check and fill up of the day, I heard this little voice in my head going “I could do this all day” which brought a huge smile to my face. I answered with “Oh, could you Cap?” and the smile broadened.

This 3 cylinder, 25 year old tin box built for economy being pushed near its maximum 140 km/h speed for hour after hour… showing no problems at all. No oil consumption. No overheating. No electrical gremlins. Boosting pressure through the motor for MOST of the drive with A/C blowing until the sun dropped and the weather cooled.

And it could just keep doing it.

So the Cappuccino is named Cap after Steve Rogers – Captain America. He could do this all day. 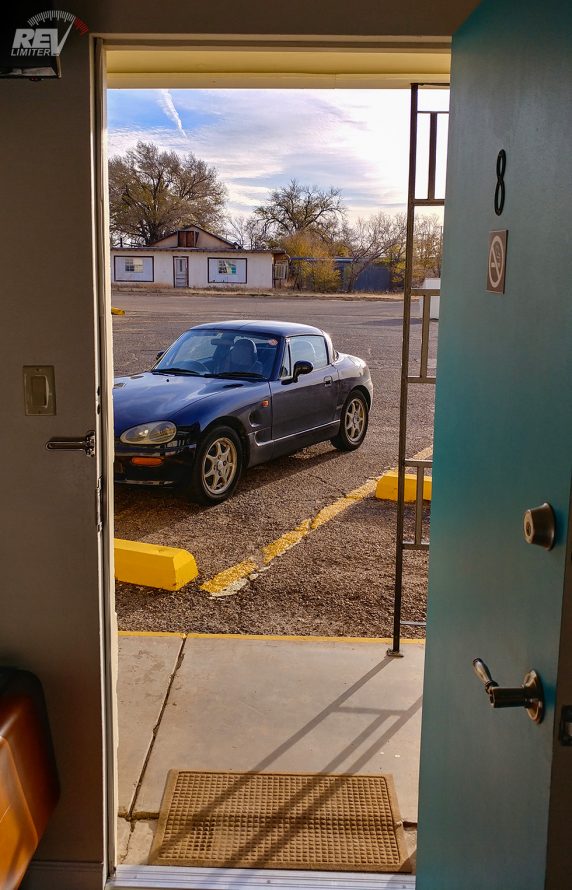 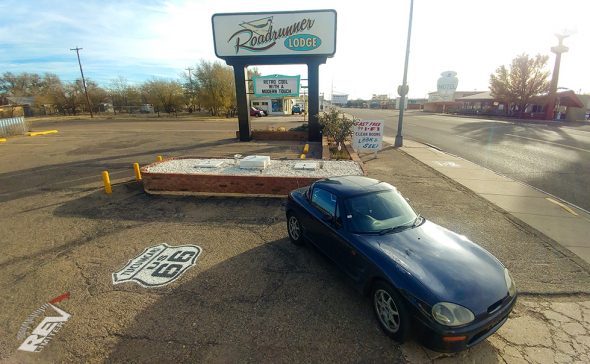 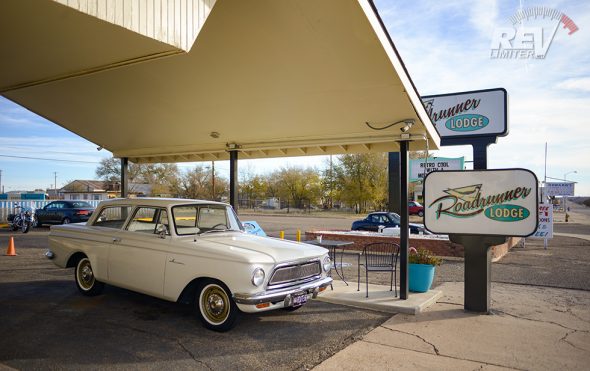 I didn’t set an alarm. I was less than three hours from home and I wanted a good night’s sleep and to explore the town a bit in the morning.

I grabbed some pix of the Roadrunner and the Rambler. I stopped in the front office for a cup of tea and cursed Cap’s total lack of cup holders. I fired up the tiny car and did a lot of U-turns on a mostly-abandoned stretch of RT66 on a Sunday morning.

Tucumcari was almost as beautiful in the daylight as it was lit by neon. 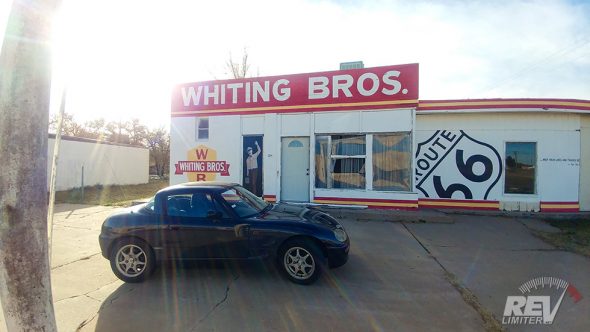 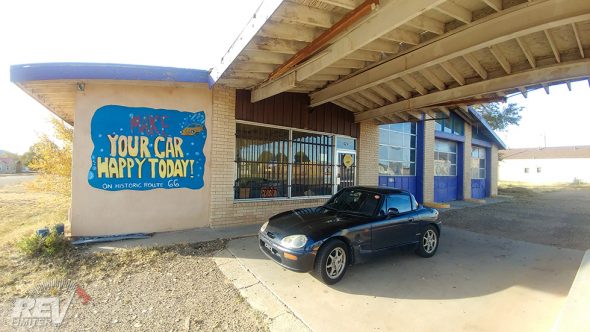 Auto Detailing – not sure if abandoned. 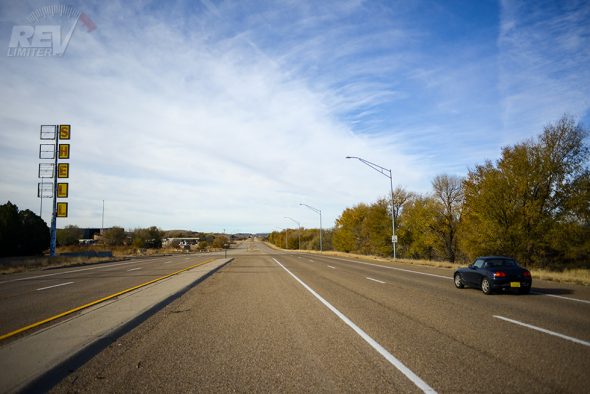 So many buildings were abandoned. Beautiful? Yes. Crumbling? Yes. 2019 doesn’t seem to be showing Tucumcari much kindness.

I wonder how this town was even 15 years ago? Many of the buildings looked recently closed. I wish I’d seen it earlier, but I’m grateful to have finally visited.

Cap and I drove north out of town towards I-40 and the final stretch of RT66 was the most stunning of it all. The road was as shown in the last pic above – 4 lanes with a huge center turn lane. Lots of highway lamps. Tons of abandoned buildings and businesses.

And no cars at all.

Nothing. No one. For the nearly 3 miles, the road was completely empty. I stopped in the lane and took a dozen photos from different spots. No cars appeared in either direction while I stopped and gaped.

I hopped back in Cap and pegged the speedometer for another few hours until reaching home. 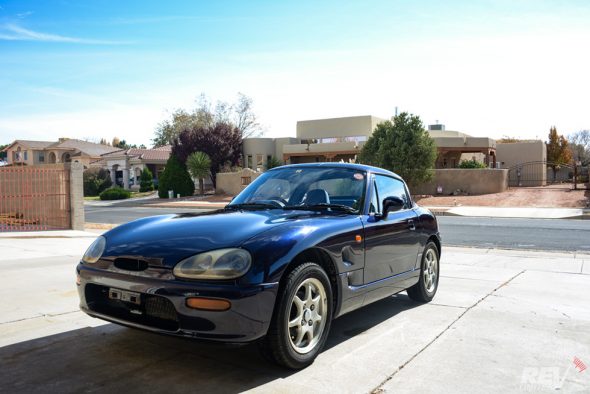 There’s a Cappuccino in my driveway.

And that brings us up to the present. I got home and was greeted by my wife and daughter. Rides were had. Right-hand-drive smiles filled each of our faces. Cap got a quick wash and was parked for the night.

He asked why. “Why did we stop driving? I can do this all day!”

4 Responses to “A Little Road Trip”