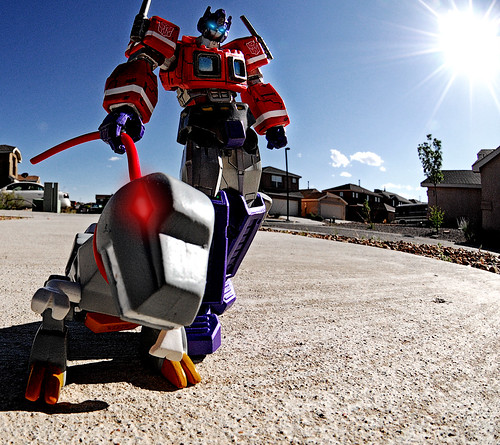 The idea for this shot was an easy one. I walk someone named Grimlock between 2 and 4 miles a day. =) If only all ideas were this easy.

Setup was also not difficult. I made the leash out of 18 gauge red electrical wire. Grimmy is a MyClone, which are poseable but not really to the degree of Revoltechs. I added some silly putty behind the neck to get the head angle right. Then I just took them out to the sidewalk in front of my house with my 10.5mm fisheye lens and shot 6 or 7 exposures. This is the best one.

The eye glow comes from a photoshop plugin called Alienskin Eyecandy. I apply the glow and then dodge the center a bit to get the hot white part to come out. I gave it a bit of a square crop to emphasize perspective and that’s it. 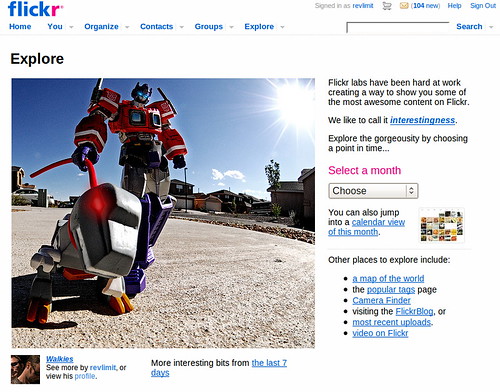 Not to toot my own horn, but this one took off in popularity and hit the Explore Frontpage (a flickr thing). It was also the #1 most interesting photo of the day for a few hours, out of all the millions uploaded. My previous Prime 52 shot only made it to the #7 most interesting. So I’ve hit the apex of flickr popularity in only 2 weeks of Prime 52 pix. Now there’s nowhere to go but down.