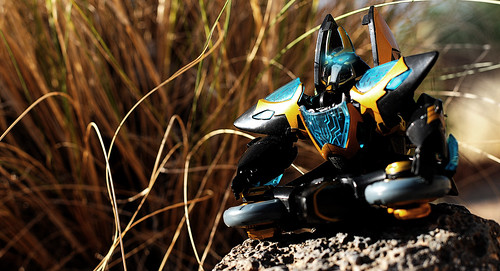 No, this isn’t a funky version of Optimus Prime. =)

Transformers Animated’s Prowl takes the Plastic 52 slot from Prime this week. I found (finally!) the Samurai armor version of him at Target last weekend and have been scheming on a photo that would do him justice. A stone in the backyard in front of some native grass was the perfect spot. I tried to capture the inner calm that Prowl’s character displays throughout the series.

If you’ve not seen Transformers Animated, go check it out on youtube. Most of the episodes are uploaded. They’re possibly the best Transformers stories to ever be put to animation. And Prowl is certainly one of the finest and most memorable characters.

No Responses to “Processor Over Matter”