Where to even begin? I’m at a loss. I guess I’ll start at the beginning.

Be warned – the following is MY experience at Miatapalooza. It’s not what most attendees got. I didn’t get to walk around and see the 650+ Miatas, but my experience was pretty damn fulfilling and awesome. Seems like I should blog about it rather than some vague 3rd person guess as to what most people got out of the event.

Many thanks to Rene and Rick for letting me borrow some photos for this post. I was in my booth the whole time making hundreds of new and old friends. 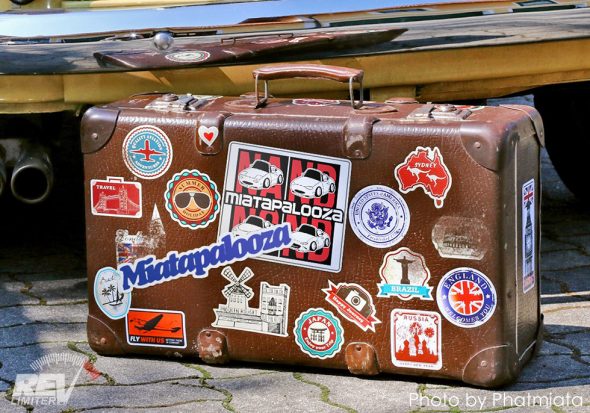 Last year, Randy (head of MazdaRoadster.net) started making noises about doing another Miatapalooza event. That’s a huge gathering of mostly-Florida Roadster enthusiasts and something that hadn’t happened in a few years. Randy does nearly everything himself and it takes a lot out of him. He started planning a year in advance.

Fast forward to February of 2017. Plans were finalized and I was going to attend as a vendor. This is something I’d never done. I had no idea what to expect, what to do, what to bring, or what I needed.

With Randy’s help, I got a simple list of stuff I needed put together. He offered his warehouse to receive any products I wanted to ship so that I wouldn’t have to check a dozen boxes on the plane.

I took him up on that. 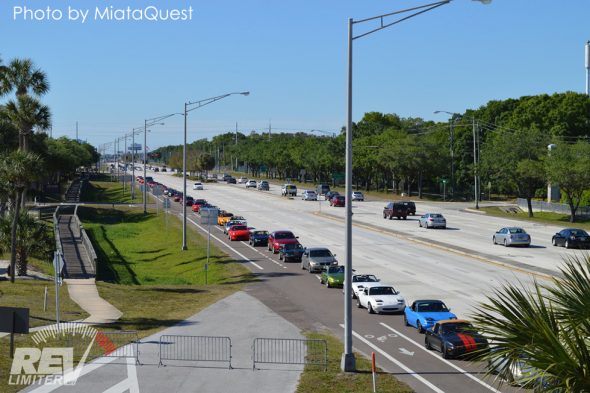 The Miatas pour in. 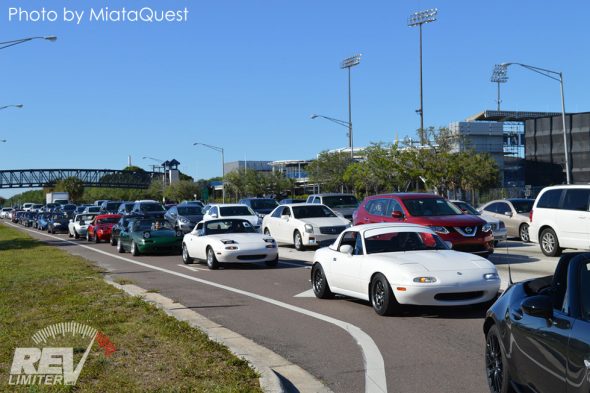 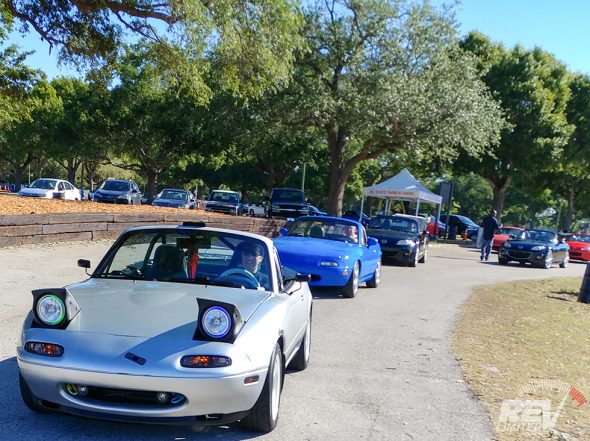 Fast forward two months. I made around 50 sets of gauges for the event, 80 badges, ordered a few hundred vent rings, got custom event plaques and keychains made, and figured out what I needed to do and have to actually sell this stuff in person instead of over the internet.

I also flexed my Amazon Prime account and bought a bunch of things I needed – a huge wedding tent for $80 shipped. Display cases to show off the small things. Storage for the gauges. Table cloths. Banners. Everything.

Randy hooked me up with tables for the event and a bunch of other small things I needed. I owe him a billion thanks. (I donated my tent and some other supplies to him at the end of the event.) 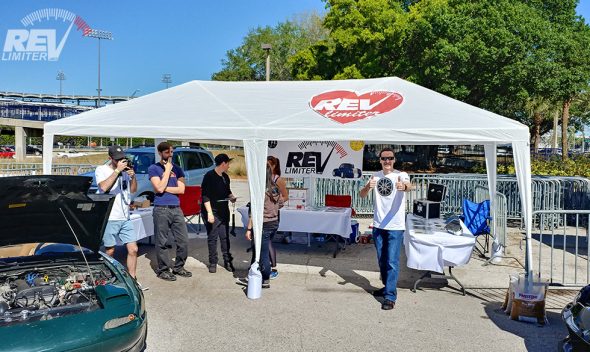 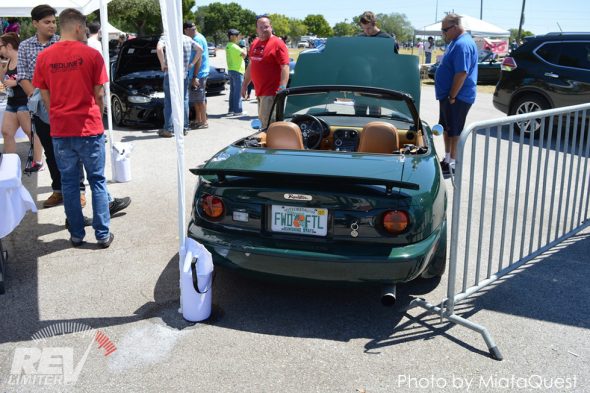 Fast forward to the actual morning of Miatapalooza.

I did not drive Sharka to Florida. I thought about it and was considering it, but… 3 days of driving to get there. If I’d hated myself, I could have done it in 2 days. And it would have been fantastic to have the little guy at the event, parked in front of my booth. But to turn around and drive back the next day? No sir.

I asked some buddies who lived much closer to park and be revlimiter models. Corey brought Lobo, his green NA. Eric brought Harbinger, his black NB. ( God willing, I’ll have spotlight blog posts about them both in the next few days, but my photos of them are a bit lacking… ) Both cars are gorgeous and were perfect booth babes.

I also asked a couple MR.net forum buddies to assist in the booth whenever they could. Basically just hang out and maybe help set up and break down. I asked three guys aside from Corey and Eric – Rick, John, and Pete. I thought five would probably be enough helpers.

At the end of the event, I probably had a dozen folks help out here and there. Everyone was AMAZING. Just a huge outpouring of help. Thanks to all who helped, especially Alexis and Gavin.

Anyways – back to the event. I rolled up and the tent was already unpacked and mostly figured out. Rick and Corey put together most of the skeleton. Eric and I hopped out and got the tent the rest of the way up in the next 10 minutes. Then tables appeared and all of the goodies got set out. We were ready to roll and sell by 9:30, a half hour before event start. 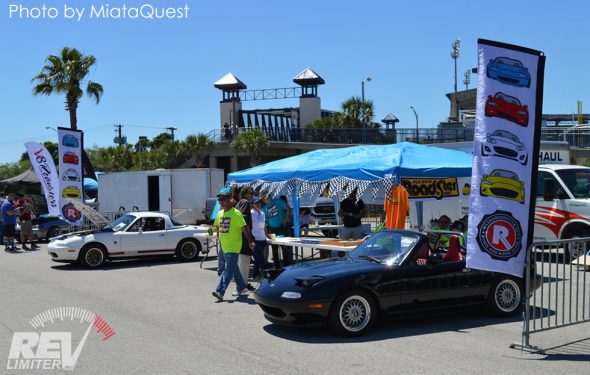 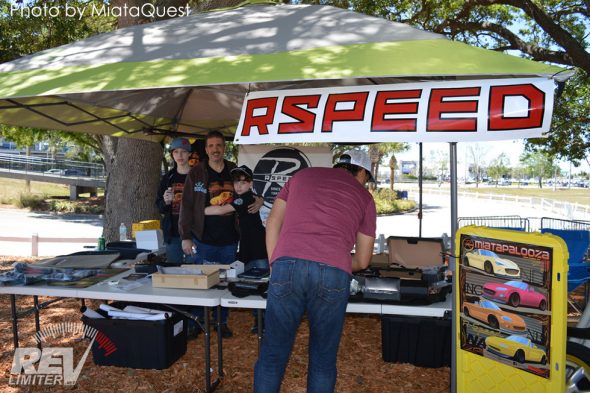 I got to setup right next to Randy’s tent – the main Miatapalooza tent. The tent that everyone had to hit for their teeshirts and other goodies. That’s… awesome. I had so much traffic in my booth all day. It was fantastic.

On my other side was Rspeed. THE Rspeed. One of the oldest existing Miata-centric speed shops in the US. Getting to meet Joe and drool over the Miata parts he brought along? Yeah, a huge highlight.

Thanks again for the prime spot, Randy! 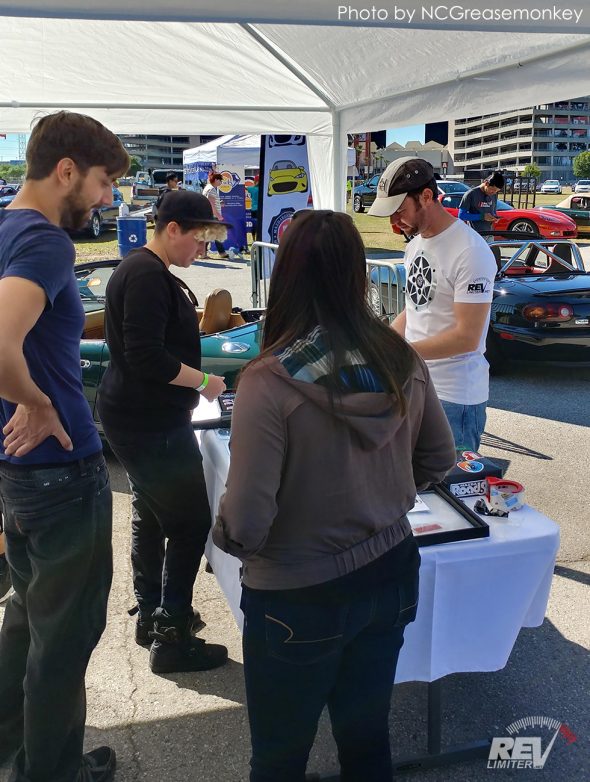 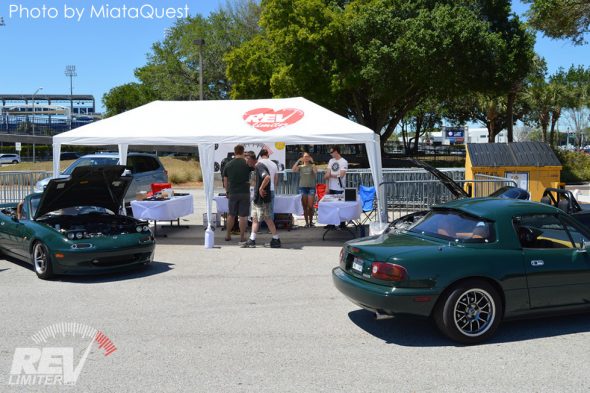 I fear I’m not doing myself justice with this rambling blog post. I’m not going to go back and edit. I’m just going to keep going.

As I said, I had folks in my booth all day. There was maybe 5 minutes total without a customer. That, my friends, is how you define a successful booth.

After browsing and buying, folks would just hang out in the shade and chat. And it was GREAT! I got to talk to SO many people I’d only emailed with. So many hugs, high fives, and handshakes.

It’s 3 days later and I’m still on a high from Miatapalooza. 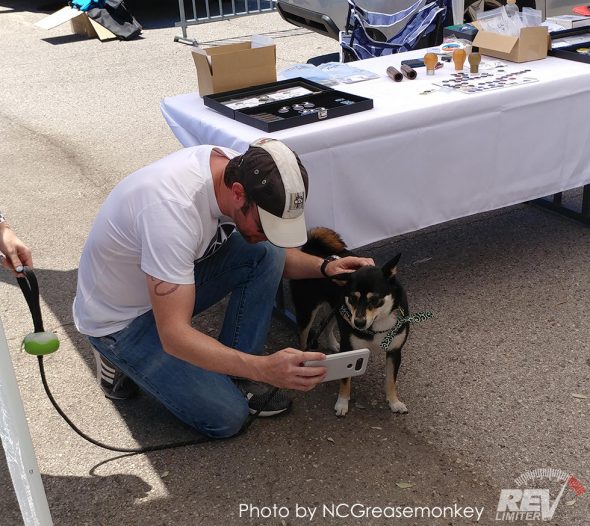 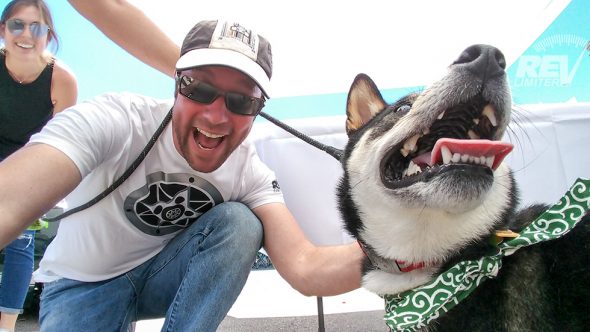 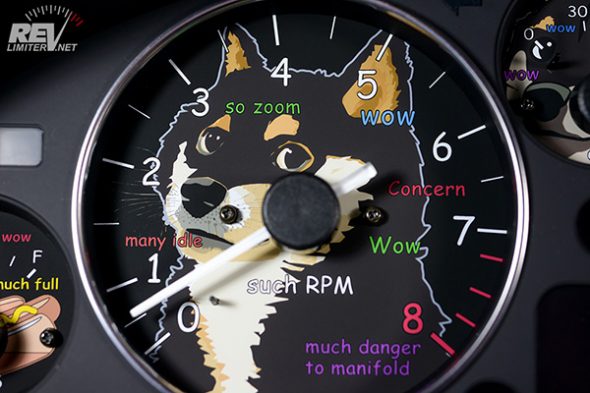 This might be my favorite memory from the event.

You guys know the DOGE gauges? I designed a custom one (seen above) for the family of a black and tan Shiba Inu. It involved my original gauges, a drawing from the pupper’s grandmother (I think) and a bit of custom work. It came out great.

And I got to meet the actual DOGE!!!

That’s pure joy on my face. 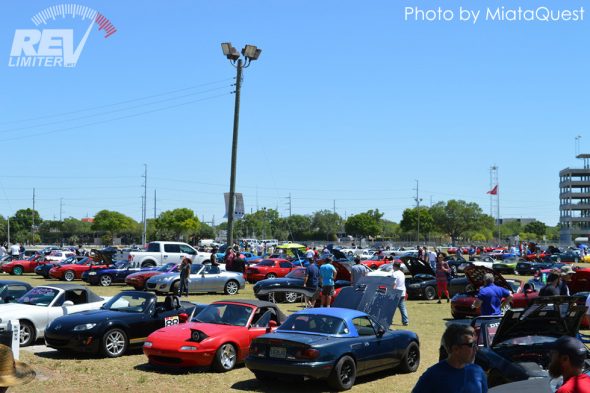 A field of Roadsters. 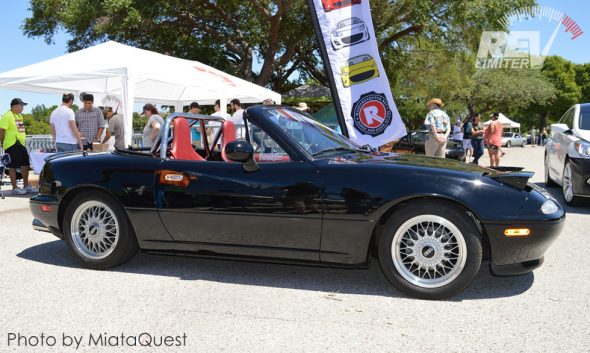 The shadows started to grow long and the event wound down in the afternoon.

All of the vendors brought raffle prizes and introduced them. I gave away some vent rings and gauges. I also did an impromptu Miata trivia contest to give away my goods. SO much fun! Congrats to the folks who knew the answers to my random (very difficult) trivia questions! I hope you enjoy your goodies.

When it was time to start breaking down camp, all of my helpers (who basically hung out all day and were incredible) mobilized and got things torn down and boxes repacked in no time flat. Tents were folded. Product was padded and packed. I think it only took 30 minutes to get everything put away.

Just incredible. I had angels at the event with me. I’m extremely grateful for the help.

And just like that, Miatapalooza was over. Nothing left but dinner and the after-party. But that’s a story best kept to ourselves.

Till next time Florida!!! You’ve made me one very happy Miata nut.

Check out MazdaRoadster for more pix and stories.