So. There I was racing around the local track. My buddy Ben had it to himself for an hour on a Saturday and had invited me and my wife to come along. Sharka’s inaugural turbo track day. Woo! Turbo + lots of open race track!

Anyways. There I was. I had some knock according to my Link and was tuning it out. Basically adding fuel and then doing a lap. Then adding more. Then driving more. It was enjoyable. The turbo is brilliant on the track and I was not having any overheating issues.

Then I started to smell something burning.

So I pulled over. Got out. Didn’t see any smoke or smell any. So I drove back to the pits since the hour was almost up anyway. I parked. I popped the hood. No smoke. Nothing bad that I could see. I guessed it was just some blowby due to a possibly-crappy PCV valve. I packed up. The wife pulled into the pits after her very first track experience in her Miata and was all grins. It was a great day! So…. we went home.

I’m gonna tip my hand with this next photo. 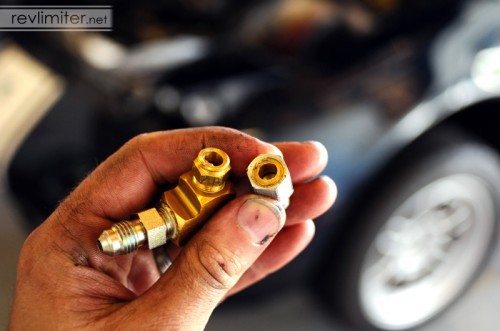 The track here in Albuquerque is fairly close to my house. Maybe 15 miles away. And nice fast back roads to get there. Anyways, picture a nice back road and 2 identical Miatas zooming down it. Not a care in the world.

I look in my rearview…. and it looks like there’s a cloud. Or some low fog. Something odd. But it doesn’t seem to be visible in my side mirror. This perplexes me. And I start to smell MORE SMOKE. So… I really pay attention to my rearview.

A turn-off comes up, so I pull over. So does Sarah. I walk back. “YOUR CAR IS ON FIRE.”
“Nuh uh!” I turn around and look.
*faint puffs of smoke from the driver’s side back wheel well*
“Oh no.”

I lay down and look under the car. Sure enough. There’s smoke coming out. Possibly from the cat. But that’s not as visually striking as the HUGE PUDDLE OF OIL forming under the engine.

I pop the hood. No smoke.

So… I add a quart and it brings it up to full. No problem. For some reason I brought 4 extra quarts to the track. I should have plenty to get the few more miles home. Right? Right????

The only thing I saw on the remaining miles of that drive was my oil pressure gauge. No boost. No high RPMs. Just slow cruising and the oil pressure gauge. I limped Sharka home. And for most of the way, it was fine. No oil spray. No smoke. It was just the last mile that saw the gusher return. And damn, did it return. You could see my line through the neighborhood for a week. It was laughable.

But I got Sharka home just fine. When I checked the oil, it was again about a quart low. But there was good pressure the entire way and now, a few weeks later, I can safely report that the engine is fine.

So. Why the oil spray? Turbo guys probably recognize the part pictured above. It’s the adapter for the tee to the turbo oil feed line. 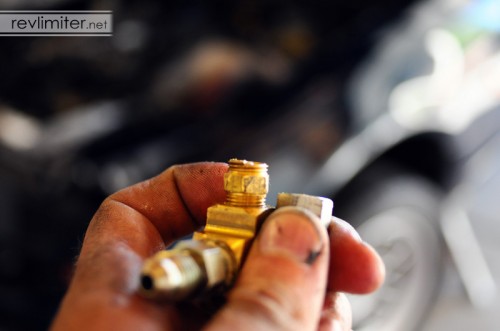 Snapped clean in half.

Flyin Miata gives you a nice, strong steel fitting. Which I managed to cross thread and mess up on my block. So, instead of spending $24 on another one from FM, I went to Ace Hardware and cobbled something together with their brass fittings.

This brass fitting holds an extremely heavy solid brass tee. On the end of that hangs a heavier VDO oil pressure sender. And out the side is the braided stainless oil line to the turbo. Lots. Of. Weight. And multiply that weight by some factor due to me having to use a couple of pieces to get it all to fit rather than the one small, strong, excellent steel one that FM supplies with their kits.

Yes. My little brass fitting lasted about 3 weeks. I got the car on jack stands and started hunting around for the problem. My first guess was that the oil feed line had come loose. So… I put a wrench on it and started to turn. POP!!! The tiny bit holding the brass fitting together broke off in my hand. With almost no force. Yay. 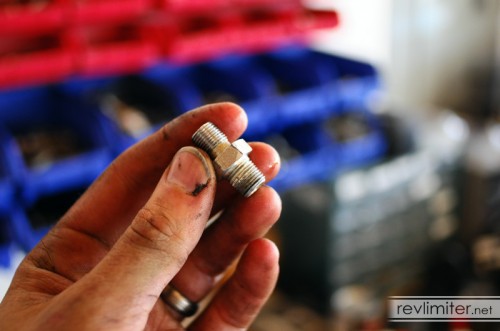 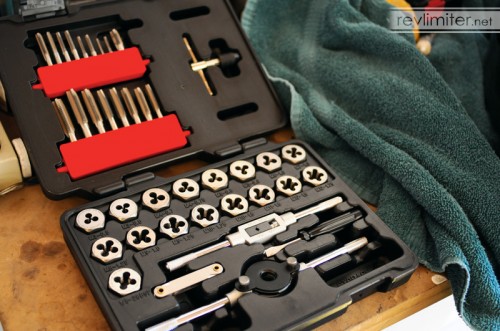 An excellent set of metric taps from Sears.

But what of my stupid engine block that managed to bugger the threads on my last $24 BSP oil fitting? I decided to source a BSP (British Standard Pipe) tap to chase those threads and make sure it wouldn’t destroy another fitting. The only place in town that had such a tap was Sears. It comes with their metric tap & die set. I already have a metric tap & die set, but… well… it’s not very good. Or complete. So this was a justified purchase.

Chasing the block was easy. I greased up the tap – just like I did when tapping my oil pan – and carefully tapped it. Nothing to take photos of here. It is not really possible to see what you’re doing with the engine in the car. You basically get to feel your way around. But there are worse jobs that you can do on a Miata.

A few minutes of work and the threads were perfect. I put together the oil tee fittings and screwed them into the block. No problems. Everything fit fine. 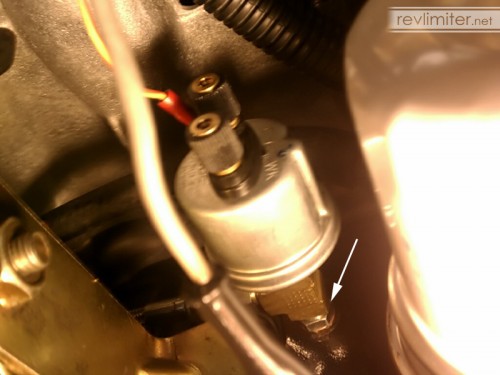 This shot is courtesy of my phone. There’s not enough room in there to get either my real camera or my point and shoot. The phone juuuust fit though. Heh. That gives you some idea of the tight space.

And then it was time to clean everything.

Those who know me well (or at all) know that I’m a bit of a clean freak about my car. I have a touch of OCD. And I let it run free on my car’s cleanliness. I’ll put it this way: my favorite part of doing an engine swap is the week of cleaning the engine bay. Getting all the years of caked up gunk off the never-seen parts. Getting everything to shine. I LOVE THAT. And I had that. Just a few weeks ago, Sharka’s engine bay and underbody were perfectly clean.

And now they are again. 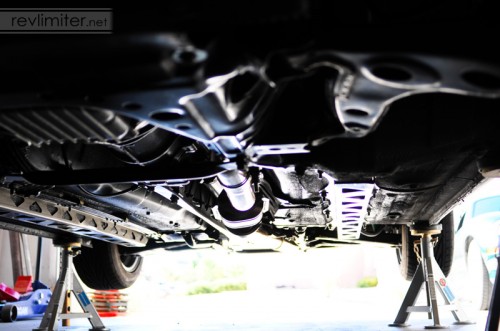 AFTER. There is no BEFORE photo.

I was too disgusted to take a before photo. Just imagine the same shot with absolutely zero shiny stuff. It was vile. But a solid day of scooting around on my creeper with some degreaser and Simple Green took care of everything.

And then a week of burning off the oil residue and degreaser from my exhaust. 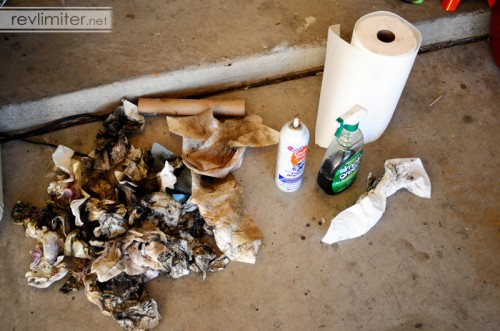 I felt a little silly taking this shot.

Yes. A photo of a pile of paper towels.

Anyways. That’s my first broken turbo part at the track. I’m very pleased to report no consequences of that breakage. The engine and turbo both run just fine. The only damage was to my ego and Sharka’s clean underbelly.

And, God help me, I love an excuse to clean my car. Any excuse.

4 Responses to “Broken at the Track: Oil Feed Edition”