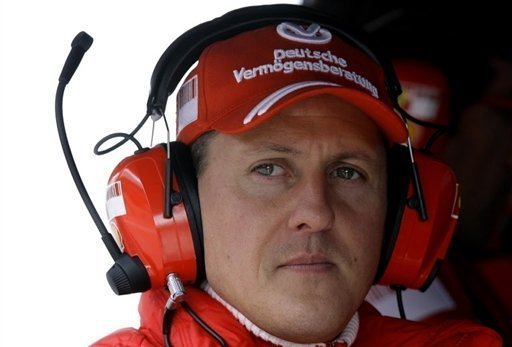 It’s a sad day. The promise of a Michael Schumacher comeback has gone away. Seems that the neck injury he suffered while racing motorcycles is just too much and he’s not able to drive an F1 car without pain.

I mean…. damn. It’s 3:30 am here, I’m awake, and I find this in my newsfeed. I hate to sound like a selfish F1 fan, but not a day has gone past since Schuey’s announcement that I’ve not been excited about the next race. I’ve thought about it daily.

Still, it was exciting for a moment. Take care Michael. Maybe give your buddy Ross a call for 2010?

AP news copied below, since their stories are impossible to link to, yadayada…

BERLIN (AP) — Michael Schumacher on Tuesday announced he has called off his much-anticipated Formula One comeback because of lingering injuries from a motorcycling crash earlier this year.

The seven-time world champion was to fill in for injured Ferrari driver Felipe Massa and hoped to return at this month’s European Grand Prix in Valencia, Spain.

Schumacher said on his Web site he informed top Ferrari officials on Monday evening that “unfortunately I’m not able to step in for Felipe.”

Schumacher, 40, retired at the end of the 2006 season. Since then, he has raced occasionally in a motorcycling series but was injured in a crash in February.

“The consequences of the injuries caused by the bike accident in February, fractures in the area of head and neck, unfortunately have turned out to be still too severe,” Schumacher said. “That is why my neck cannot stand the extreme stresses caused by Formula One yet.

“I really tried everything to make that temporary comeback possible. However, much to my regret it didn’t work out,” he added.

“Unfortunately we did not manage to get a grip on the pain in the neck” which arose after he tested an old Ferrari at the Mugello circuit in Italy, Schumacher said.

“I am disappointed to the core. I am awfully sorry for the guys of Ferrari and for all the fans which crossed fingers for me,” Schumacher said.

“All I can do now is to keep my fingers crossed for the whole team for the coming races.”

Ferrari president Luca di Montezemolo thanked Schumacher for his loyalty to the team in attempting an F1 comeback.

“I am very unhappy that a problem means that Michael cannot return to racing,” Montezemolo said. “In the past few days, I could appreciate his great efforts and extraordinary motivation which had spread through the team and fans around the world.

“No doubt his return would have been good for Formula One and I am sure it would have seen him fighting for wins again,” he added. “In the name of Ferrari and all the fans, I wish to thank him for the strong attachment he displayed for the team in these circumstances.”

Ferrari announced that team test driver Luca Badoer will race in Massa’s place at Valencia. Badoer, an Italian, was first floated by Italian media after a crash took Massa off the race circuit.

The 28-year-old Massa underwent surgery on multiple skull fractures after he was hit in the helmet by a loose part from another car and crashed into a protective tire barrier during qualifying for Ferrari at the Hungarian Grand Prix last month.

Montezemolo said Ferrari decided to give Badoer “the chance to race for the Scuderia after he has put in so many years of hard work as a test driver.”

Last week Schumacher said he was slimming down for the race, but complained of some neck pain.

“I only have to admit that my neck pinches a bit. We have to get a grip on that as health has priority – that’s the clear arrangement made with Ferrari and, by the way, with my wife, too,” Schumacher said.

No Responses to “No Schumacher comeback”