Something that’s been in the back of my mind for a while, long before my 97’s wreck, is having my TEIN shocks rebuilt. The shocks have something like 60,000 miles on them. I’m the 2nd owner. The first owner was my buddy Tom, who used them on his 99 for about a year. They were in great condition when I bought them, back in February of 2004, and I’ve put a good 50,000 miles on them since.

I’ve always been happy with my TEIN HAs and have kinda had a rebuild in my mind for a year or two. More like curiosity as to what suspension I’d put on Sharka while the TEINs were off having an adventure rather than scheming about revalving the shocks or something. I’ve wondered about the cost of rebuilding. Hell, I’ve wondered about ANY detail about it. There are very few details of the process online.

Then my 97 was destroyed and I harvested all the good parts. What better time than this to rebuild my shocks? I thought I’d document each step of the process. Maybe this has been documented by many people all over the web and I just can’t find them. Maybe there’s a secret TEIN Club where the first rule is not talking about TEIN Club. Maybe no one keeps their shocks long enough to get them rebuilt. All I know is, I’m gonna document everything.

The first step involves going to TEIN USA’s website and printing out the rebuild form. That’s right, you go directly to TEIN and deal with them directly! Refreshingly simple. As of the time of this blog post, the Tein.com link is working and correct. It might change. I’ve seen their site change several times per year since 2004.

The second step is the removal and disassembly of your shocks. TEIN tells you to do this in multiple places on their site, but in case you missed it, I’m mentioning it here. They charge you if you force them do take off your spring perches and stuff. Also, shipping costs more. I stripped my shocks and carefully piled the pieces on a shelf. I then took some heavy cardboard tubing and cut it up so as to protect the shock shafts during shipping. This was probably not necessary, but better safe than with 4 bent shock shafts thanks to UPS. Then it was into a box and off to the UPS store. $32 worth of shipping and my shocks were winging off to far off lands (California). 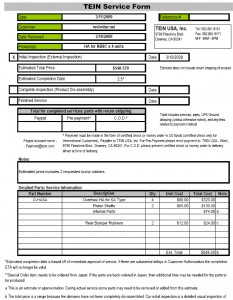 I received the third step of the TEIN rebuild process in my email today. It was a document stating the overall health of each shock and about how much it would cost to rebuild them. $530-570. Looks like I have two bent shock shafts. Probably the rears after absorbing a 70 mph impact. In 5 years, my rear bumpstops (bump rubber on the form) were pretty much dead. They were very cracked and crappy. The fronts were fine, but the backs needed replacement.

So far, 6 days have passed. I gave the shocks to UPS last Thursday and it is now Wednesday. I received the email from TEIN about an hour ago.

I feel a little odd posting the charges involved in the shock rebuilding, but it’s half the story. The small handful of posts I’ve found on various message boards dealing with TEIN rebuilds didn’t get into charges at all. Few mentioned even the fact that you dealt with TEIN directly. I hope no one thinks less of me for talking about my big, expensive suspension rebuild. =)

I’ll post updates about this process each time I have something, and some shots of the rebuilt shocks when they’re back in my garage.