The scene: 2 Fools Pub a few days ago. A bar, a glass of scotch (belonging to my darling wife).
The players: me, my LED clip lights, and my beloved Polaroid SX-70, 1973-vintage.
The shot: the cliche scotch glass on the bar with lots-o-bokeh shot. 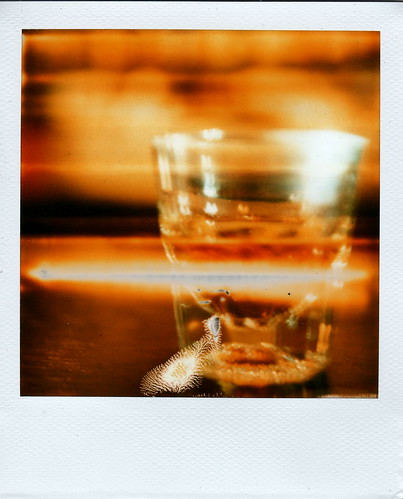 See, a Polaroid is supposed to go ka-clunk… wrrrrrrrrrrr!!!! in a happy and relatively expedient way. It is NOT supposed to go ka-cliii…wrrr…gnk and jam half way while spitting out the film. Especially not in public. Especially not near the beginning of a pack. Yes, my beloved Pola jammed and made a dying swan noise while doing so. That was the sound of my heart being crushed too. The jamming happens once in a great while. The dying motor noise? Never heard that one.

I tried shootin a second pola. This one didn’t even eject! (NOOOOOOOO!!! sob sob sob) The exposure lasted about 30 seconds and the pola was never spit out. I opened and closed the front, which makes the camera think a new pack was installed, thus resetting it. The shot came out. It was pure white – totally over-exposed. I didn’t shoot another we got home from the bar later that night. I didn’t want to know if my ancient, favorite camera was dead till or not. The grinding motor noise echoed in my mind.

Fortunately, the drama ends there. The next shot exposed correctly and spit out fine. I’ve shot another 8 since then. Yay! yay? I guess. I love my Pola but man… I donno sometimes.

Why do I get addicted to things like 36 year old cameras and discontinued film?