A huge welcome to r2limited, my second guest blogger here on revlimiter.net. Steve, who runs r2-limited.com (as you may have guessed from the username), is driving from Dallas to Albuquerque just to hang out and experience some NM mountain roads. He’ll be joining me and Geoff for some adventures.

As with Stoly, please show r2limited the same kindness you give me and Sharka. And expect a Spotlight: Rooster post showing off every tiny detail of Steve’s gorgeous white 96.

I needed bonding time with Rooster in a bad way.

This morning I left the house at 7:45 am. That’s an unusually early time for this small business owner. Usually I roll out between 8:30 and 9. After 9am – the highways in North Dallas are empty enough not to feel congested and my drive time to the office is less than half of what it would be any time before 9am. But this morning I wasn’tÂ headedÂ south.

I pointed Rooster north. For a short while, anyway. It wasn’t long before the water temperature needle was pointing at 12 o’clock and my car was pointing west. The sun was behind me. I could feel its warmth on the back of my neck, peeking through the 3-window top of my Roadster. I almost just wrote “my beloved roadster”. But, to be honest, that’s not what he was this morning at 7:45am.

What happened next was about 10 hours of the second most uneventful driving I’ve ever experienced. (The first being the 14 hours from Tampa to Dallas that I spent driving Rooster home when I bought him.) It was hot…way hot. 104 degrees hot. But the a/c was cold, my wife had packed me a bunch of water (thanks, baby) and I was good to go. I just drove…stopping only to fill up the car’s tank and empty the drivers’.

Maybe it was the heat or the monotony of the knitting-needle-straight highways, but I entertained the thought that I was racing the sun west. After all, it was behind me and we were both going in the same direction. The sun sat motionless in the sky…or maybe it wasn’t motionless but rather keeping pace with me.

Around the time the sun stopped peeking in the back windows of my car it was time to stop for lunch. I’d made it as far as Amarillo, TX and I encountered the only other Roadster I was destined to see before the end of my trip. It was a BRG NA with the top down and he flipped me the barn-door salute at the exact same time I flashed him my Bellofs. It was a nice gesture…one that I rarely encounter with the legions of Miatae that daily circumvent the grid-like map of Dallas.

Judging by the windscreen bug count, this picture was taken about 1/2 way to ABQ.

After lunch I continued to race the sun west. I don’t remember when it was but I soon noticed the reflection of the sun from the various chrome bits of my car reflecting off the highway signs in front of me. He was pulling ahead. Taking the lead.

Then he peeked in through my windshield. I turned my A/C up to “4” to compensate for the added heat from the direct sunlight on me. It was good enough. I stayed cool enough not to break a sweat.

It seemed like uneventful DAYS had passed before I finally saw this sign. Seriously – the drive was straight boring. I started entertaining the thought of veering off the main highways onto some of the more entertaining side routes.

Now I need to stop talking about the super boring drive and start talking about what happened after I arrived. I met Sharka…er…I mean…Adam! (and Sharka!)

Okay. I’ve done a good job of keeping my cool up until this super dorky moment. But it was awesome to shake Adam’s hand for the first time. (Full disclosure: it was a bro hug.) He and I have shared countless emails and other touchpoints in the past. But we’ve never met. He’s exactly how I thought he would be (nice, amiable, super easy to chill with) and I have it on good authority that he thinks the same of me…but I dont’ know what he thought I’d be like. Probably dorky, awkward and mildly cross-eyed. (All true.)

Dinner consisted of Pork Chops, a burger and….I forget what Geoff got. I think it was a steak. The Roadsters chilled in the lot while we ate. Then we took some pics.

Then we drove a bit to try and find a spot in the fading evening light to take some pictures. This gem is from a random alleyway not far from downtown.

And, finally, before we called it a night we parked illegally in downtown ABQ to take a few more pics.

At the end of the day the sun beat me to Albuquerque. But what it set on was the end of a great journey and theÂ beginningÂ of another. And Rooster is definitely beloved.

I needed bonding time with Rooster in a bad way. I’m glad I got it.

Rev here. There’s a few more pix that wanted to be a part of this post. They deserved better than to hide on my hard drive. 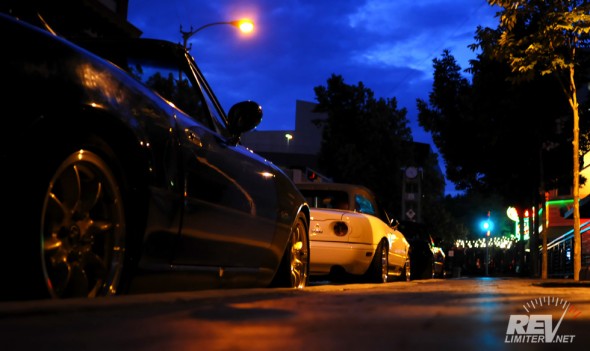 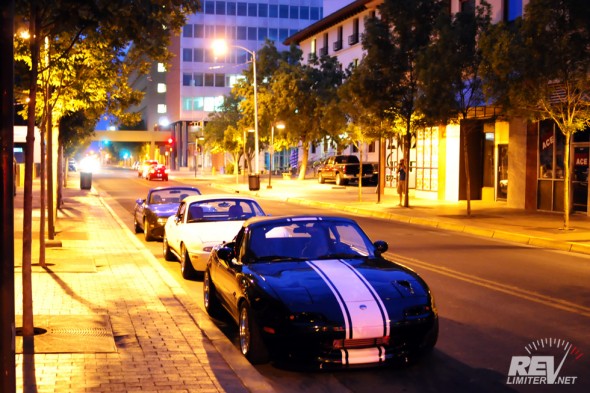 Bathed in the downtown light. 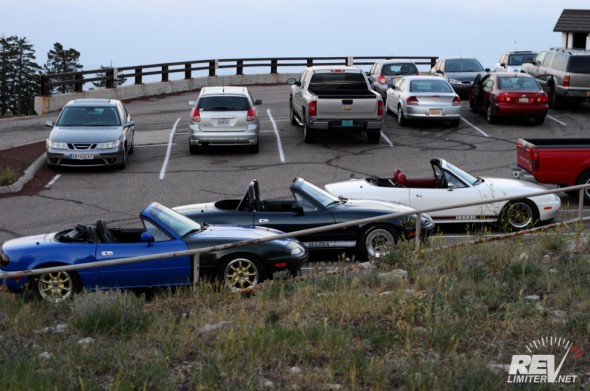 At the top of the mountain.