This was not an easy answer to find, so I had to immediately make a blog post about it once it all got working. 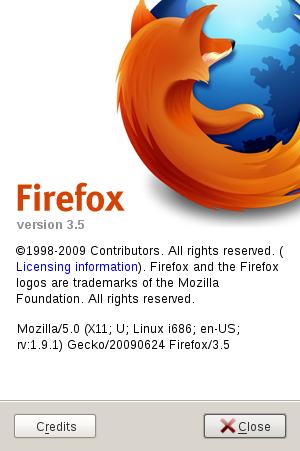 First, a rant. I love Ubuntu. It HELPS you do things, unlike other (MS) operating systems which HINDER. That said, the software repositories sometimes piss me off. For example, a new version of Gimp comes out and is all over the news. I get real excited. Do we Ubuntu users get to upgrade? NO! Usually we have to wait till the next full distribution release to get new software versions. Annoying. We do, however, get unlimited upgrades to things like the print subsystem.

And yes, I do have the latest Gimp on Intrepid thanks to get-deb. Not difficult to figure out, but I sure wish we could get official Ubuntu-approved versions of this stuff.

Firefox 3.5. There’s a spiffy little script called Ubuntuzilla that takes care of upgrading for you. It scours the official Mozilla software repositories for the latest versions of Firefox, Thunderbird, and Seamonkey, and tells you that you can upgrade if you like. You say yes and the magic happens.

Then, download the .deb file from Ubuntuzilla and run it. It’s only 18kb, so the download and install happen immediately.

Finally, open a terminal window and run ./ubuntuzilla.py and answer some y/n questions. Make sure your firefox is closed. For more info, visit the official Ubuntuzilla page. They have info on things like removing the shiny new Firefox you just installed.

Really works great for those of us still on Intrepid. I’d love to upgrade to Jaunty, but the old ATI x1700 video card in my Asus laptop has different ideas. As for Jaunty folks, it seems that you can just install the daily mozilla build repositories and then install Firefox-3.5 from there.

and to your key sources:
sudo apt-key adv --keyserver keyserver.ubuntu.com --recv-keys 247510BE

and then sudo apt-get update
followed by sudo apt-get install firefox-3.5
which worked fine for me on my Jaunty box at work.

I’ve been living with Ubuntuzilla on Intrepid since posting this entry, about 2 months, and it’s wonderful. When a Firefox update hits, it tells me! I gksudo myself a firefox session and install the new update. No problems, no worries. Immediate update technology just like I have on my XP workstation at work. I even took the 20 seconds to make a gksudo firefox %u icon for my internet shortcut menu. Life is good.

In contrast, I have Shiretoko (the Ubuntu version of Firefox 3.5) installed on my Jaunty box at work. It’s slightly less wonderful. For one, I keep hitting the wrong icon and launching Firefox 3, but that’s just user error. However, updates are still slow. When I get the new Ubuntuzilla update in Intrepid, I can guarantee myself at least a week’s wait before a new Shiretoko appears in the Jaunty repository. That, in my humble opinion, is lame. I’ll likely blow Shiretoko away on Monday and install Ubuntuzilla at work as well. It just works better.

3 Responses to “Firefox 3.5 in Ubuntu Intrepid”