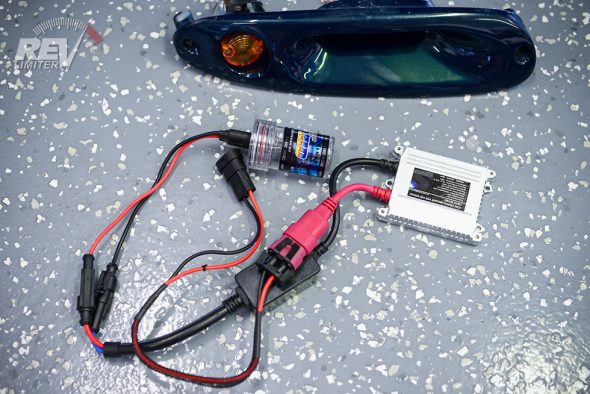 This is a blog post that’s been between a few months and a decade in the making – an upgrade to the Moss / Cobalt Hella 90mm H9 projector low beams that Sharka uses. I say a decade because I’ve been researching this topic off and on for at least that long. And months because I’ve been rocking these lights since July and enjoying the heck out of them.

Back story – in 2003 I got a nice tax return and decided to splurge on the new-at-the-time Low Profile headlight kit from Moss. Two Thousand Three. That seems like forever ago. But I still remember my quest for good NA lighting back then. I had Cibie 7″ Jeep lights installed in Sharka and, while the light was okay, they shook like crazy over every little bump. The new Moss ones used Hella 90mm lights and had really nice bracing. They seemed expensive at the time, but, tax return.

I installed them and loved them. I’ve loved them every night drive since 2003. I even managed to bang them back into shape when Sharka’s 97 body was crushed on the freeway. They have been one of the best car part purchases I’ve ever made.

And off and on since 2003, I’ve googled for a good H9 HID replacement capsule. All of the forum knowledge and online lighting experts agreed that there wasn’t one. The best solution was to either spend a couple grand on the Hella-produced D2S 90mm housings or just enjoy the OEM H9 bulbs. So I lived with the incandescent H9 bulbs since 2003.

And I was HAPPY. I was happy for years.

Until I got Ramona. The headlights on the ND2 are insane. They’re LED, insanely bright, and turn with the steering wheel to light up where you’re gonna be. They made Sharka’s headlights feel old and dim.

I started googling for HID upgrades for Sharka again.

I came across a post on ADVRider about someone upgrading his trail motorcycle to Hella 90mm projectors with an inexpensive ballast and HID capsule. A bit of research and I found that same capsule as well as a bunch of info on making HID work on the standard Hella 90mm light. 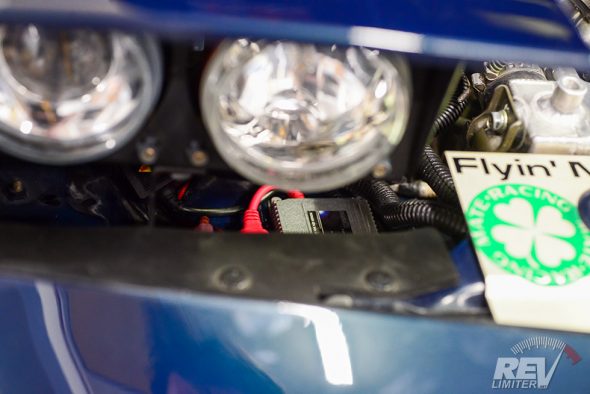 Slim ballast installed under next to the radiator.

I used Kensun’s H9 slim ballast kit. It’s a 35W kit and cost me a whole $50 shipped for the entire kit. THAT is incredibly cheap and the reason I decided to try this out. And I’m happy to say that it works.

You’ll note I’m not linking the Kensun kit via this post. I’m not that confident in the kit to give it glowing recommendations to others just yet. But you can google easily if you really want to try it out.

The best H9 conversion kit around is almost certainly The Retrofit Source’s H9 kit. Retrofit Source is the gold standard for HID conversions and what Sharka will be running in the near future. A quick google reveals glowing reviews of their quality and customer service for any flavor of their kits.

So yeah, I bought a cheap kit and I’m planning to replace it already. I realize that buying twice makes no sense, but this Kensun one only added $50 to project’s final budget. I mean, I had over 10 years of forum searches rattling around in my brain telling me that an H9 HID kit wouldn’t work. It seemed like a prudent choice. 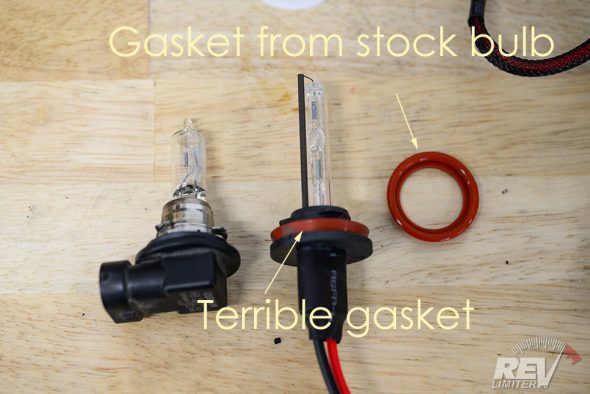 The one problem with the Kensun kit was this little red gasket at the base of the H9 bulb housing. It was super weak and not thick enough to do the job. It resulted in the bulb literally rattling around in the housing. The bulb SHOULD fit snugly and not have the ability to move. That’s the purpose of the gasket. Also keeping moisture out is a nice thing.

Fortunately, the problem has an easy solution. The gaskets aren’t glued or integrated into an H9 bulb. You can carefully remove the gasket from the old OEM bulb and install it on the HID one. You can either leave the weak HID gasket in place to sort of double gasket the new bulb or you can remove it altogether and use just the OEM gasket. I chose the double gasket method.

Installing the rest of the kit was very easy due to the tiny ballast. I have mine taped in place with the same 3M 20 lb double sided tape I use on my badges. There’s plenty of space on the horizontal shelf directly below the headlights. The Kensun kit comes with an obscenely long wiring harness. Most of that is zip tied up and around the Moss light housing.

I just realized I didn’t link to the Moss Low Profile headlights. They’re fantastic! I highly recommend them.

And now for hard data! 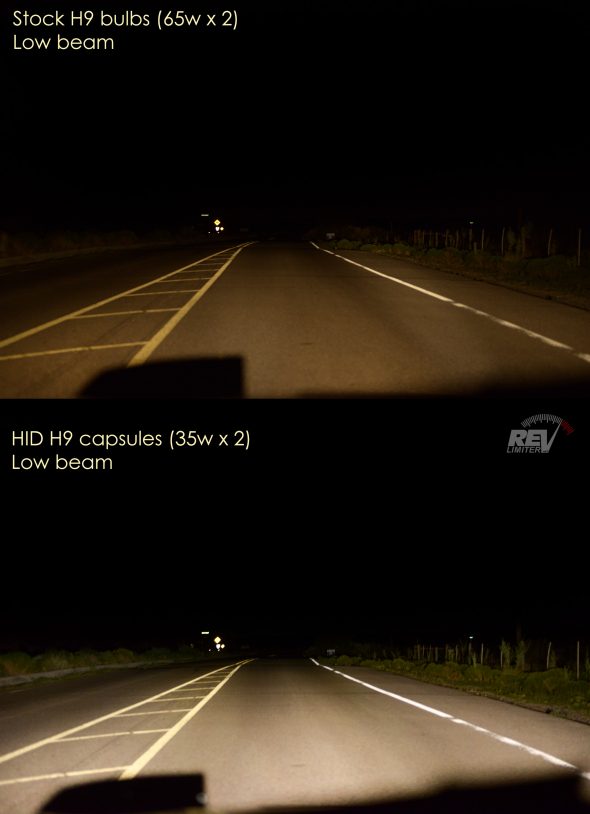 The above shots were taken several nights apart, but I tried my best to get them to be identical. My Nikon D800 was set to manual exposure using the same 55mm f/2.8 lens. 1/50th of a second, ISO-3200, f/2.8, manual white balance set the same on both pix. I parked in the same exact spot and tried for the same time of night.

The HID bulbs are 4500k temperature, giving a whiter look, but they also light up a lot more of the road. Side view is much better and everything feels much clearer. The lights have the same cut off and aim as before. No glare or dazzle. In the past four months, I’ve not been flashed a single time by oncoming drivers.

and now for the high beams… 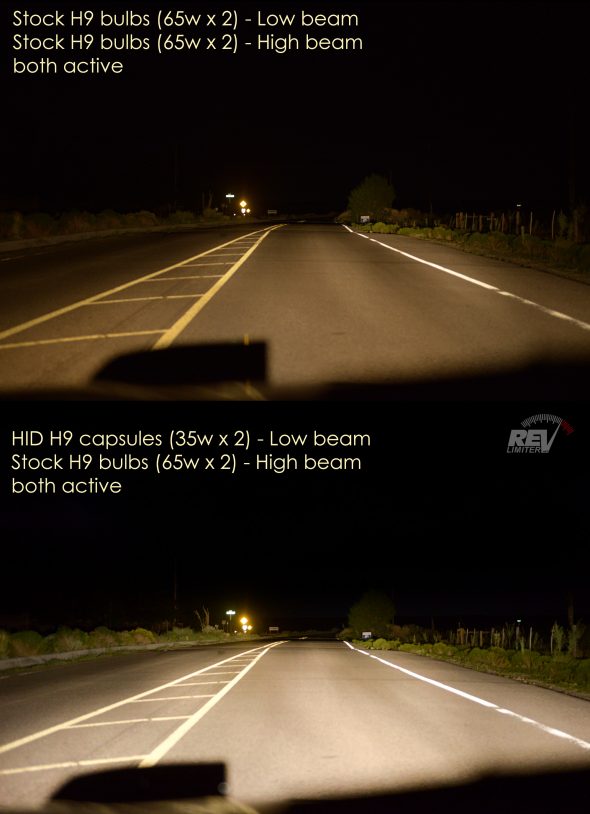 I have my Moss lights wired to keep the low beams lit when the high beams are selected. This gives me four little beams with which to pierce the darkness. It’s like daylight in front of Sharka.

I haven’t yet upgraded the high beams. They’re still the OEM incandescent H9 bulbs. I have thoughts about changing them to LED but I haven’t found a good kit to do that yet. Research continues. Until I find something though, I’m really happy with this upgrade. 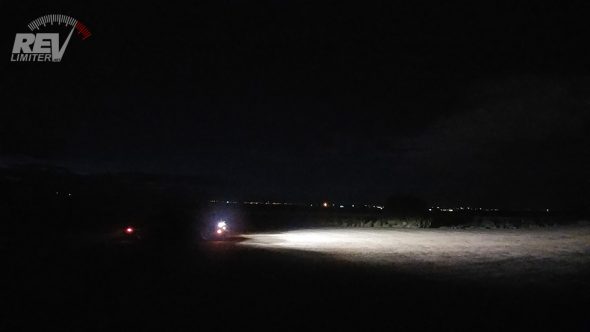 The next upgrade for these will almost certainly be that Retrofit Source HID kit, thought I might keep this cheap Kensun one installed for a while. See how long the bulbs and/or ballast last until they die. That would be good info for a blog post after all.

In the meantime I’ll be trying to find info on a good LED high beam option that will physically fit in the small space the Moss lights allow. Any upgrade might require modification of the housing but I’ll burn that bridg….

er… not burn. Strike that! No talk of burning things down when electrical systems are involved! I’ll CROSS that bridge when I come to it.

Hope this post helps out some folks with the excellent Hella 90mm headlights.