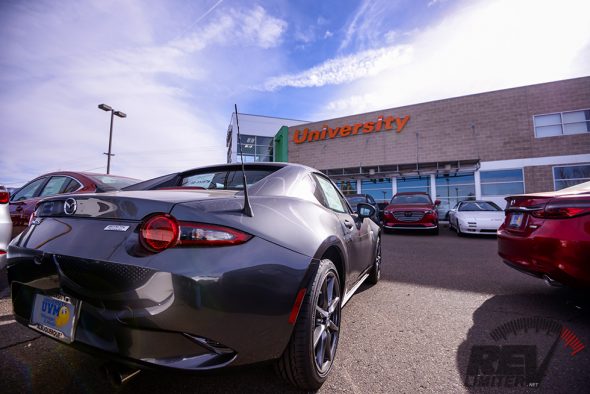 I’ve done a lot of things in the (slightly more than) 18 years of owning Miatas. I’ve changed nearly every part possible on a car, I’ve killed countless cones, I’ve driven thousands of miles to attend Miata events, made numerous life-long friends, started a small side business making Miata parts and grown that business into my full time job.

But I’ve never bought a NEW Miata. All of my cars have been used by someone else before I purchased… 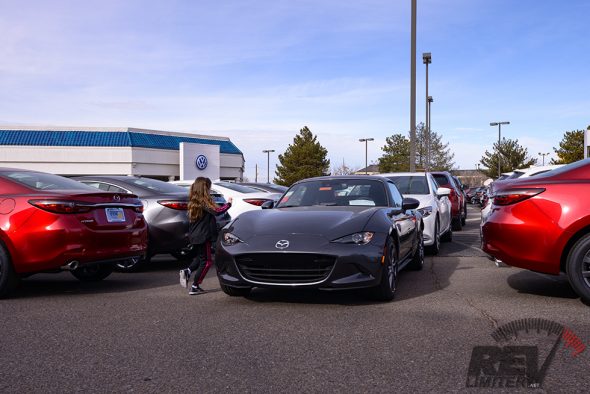 A few weeks ago, I stopped by the local VW/Mazda dealer and test drove a 2019 ND2. It was the only one I’d not yet tried out. I’ve test driven the ND1 (2016-18) in both manual and automatic. I’ve also tried out the ND1 RF and loved that top. But I really wanted to check out that new engine with the 7500 rpm redline and extra power.

University Mazda had one with a 6 speed. It happened to also be an RF (which has smitten me for a while, I mean IT TRANSFORMS!!!) so I gave it a try.

I could type pages. And I will! But that’s later. It was love at first rev. So much love, you guys.

I was in deeper smit than before.

My wife came on the test drive as well. She also loved it. I believe we were home 5 minutes before she asked me why I hadn’t bought the car. 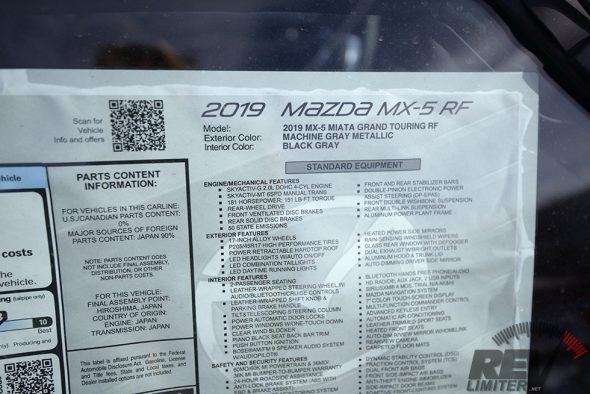 I reached out to a few Mazda insiders who – crossing my fingers – might be able to help me in the quest for a new Miata of my own. Emails were sent. Toes were also crossed. A few prayers to the car gods might have been said.

Shortly thereafter, I had secured E-plan pricing on a new Mazda car.

I called the dealer and setup a time to get a check in their hands and some keys in mine.

HUGE thanks to everyone who helped me out with the E-Plan stuff!!!!!! You know who you are. I’m blessed to know you. I can’t sufficiently thank you enough. 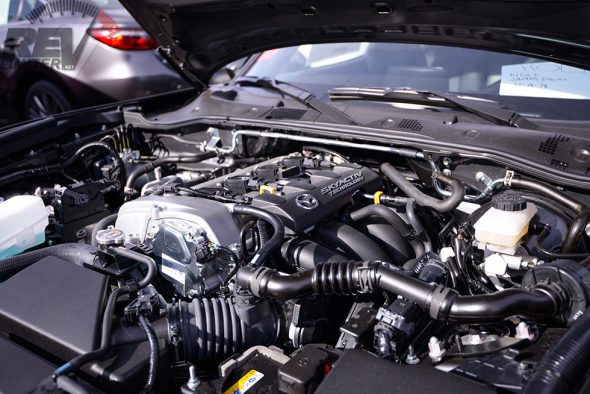 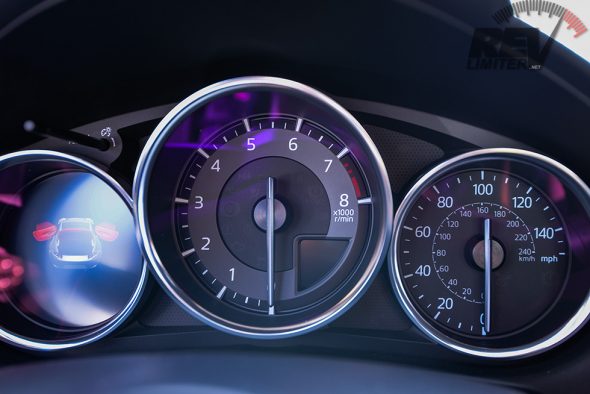 And a tach to match.

And as fantastic as E-plan pricing is, it wouldn’t be useful without a dealer to honor it and an awesome salesman to help me the whole way.

Equally HUGE thanks to James Dean and University Mazda! I’ve bought a few new cars in my life and many other used ones. I’ve never before had such a pleasant experience doing it. I felt, well, like a employee buying a car. There was no pressure, no run around, no stress, and no problems.

I mean, I brought my little girl along. My 7 year old daughter was hanging out and playing while I bought this ND, and she was happy as a clam.

If anyone is in the Albuquerque area and needs a Miata (or any other Mazda or VW), reach out to James Dean. He’s fantastic! He’s also got a youtube channel with some damn entertaining videos. Worth checking out and thanks again James!

Now, back to the car… 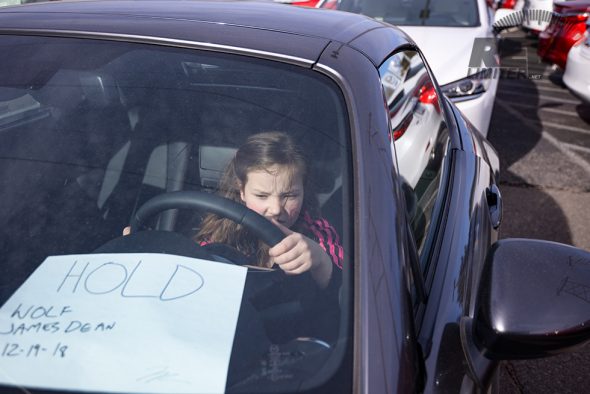 As I said, I brought my daughter. Her mom dropped us off and went to lunch. We hung out, wandered, and played while the car was being detailed and prepped for launch.

But before we even bought the car… we did a tiny mod to it. 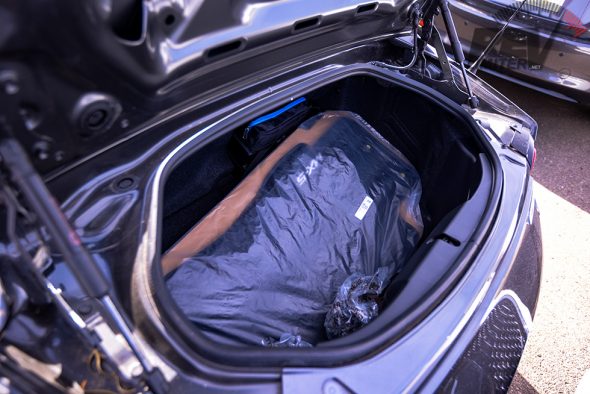 Floor mats in the trunk? 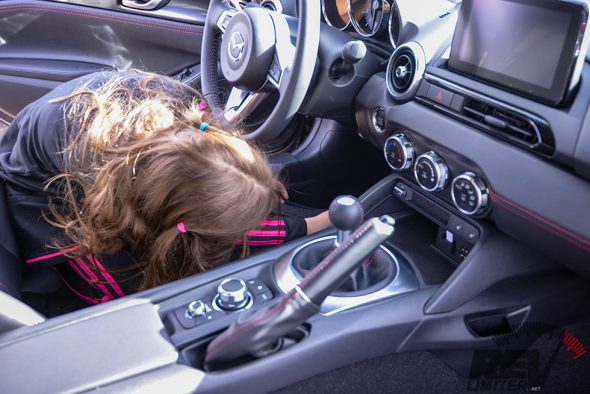 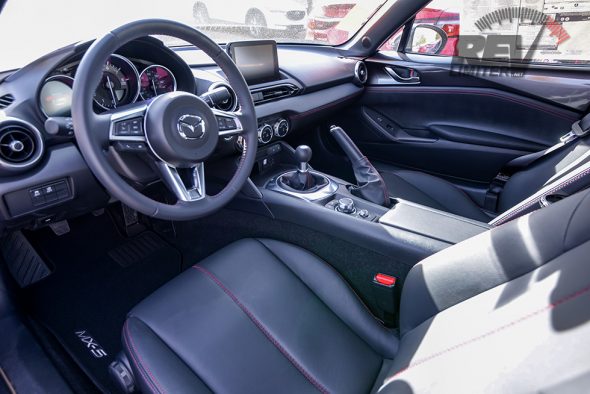 Whilst checking the car out, I popped the trunk and noticed the floor mats sitting back there still in the wrapper.

“This won’t do,” I said to revkid. “We’ve gotta install these mats.”
“But daddy! We don’t even own this car yet!” she exclaimed.
“BAH! We don’t let technicalities stop us.” And with that, the mats were opened and installed.

And then James returned to get the keys back from me so that the car could be cleaned up. 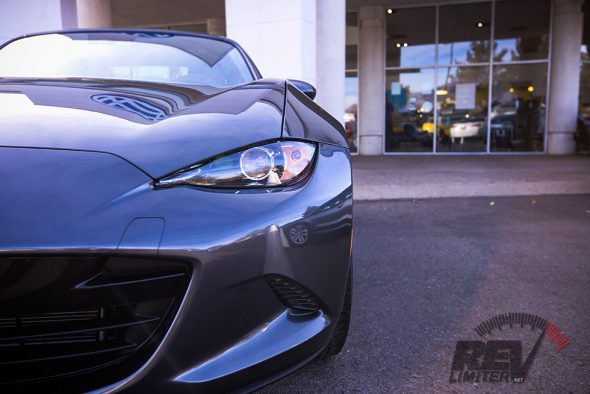 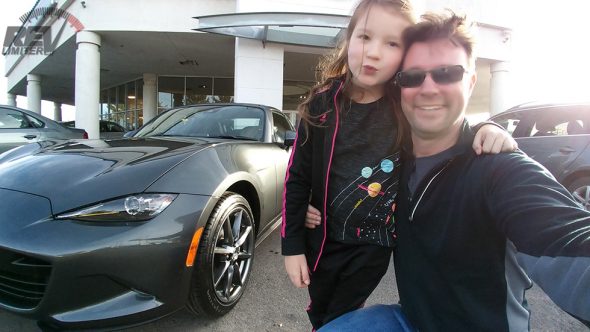 And so, a new Miata was finally mine.

Over the years, I’ve wished numerous times that I’d bought Sharka new. I was lucky and never had any problems from previous owners, really… but I just always wished I’d had the little guy from day 1.

The ND RF felt special when I drove it. And with the ND2 engine? Even more so. It felt like a car that deserved to be purchased new. I know it isn’t logical, but… I finally got a new Miata. 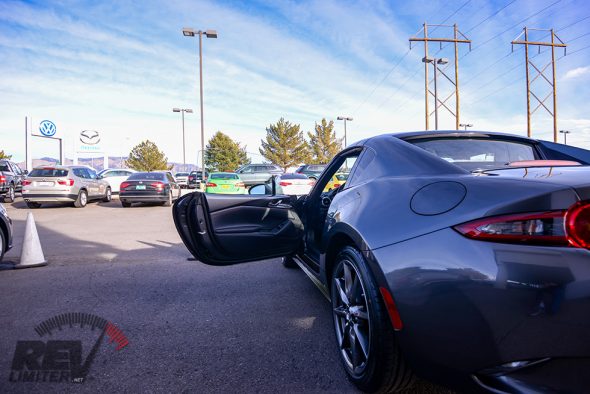 The future is looking bright, you guys. Next blog post – I’ll take some pix of the car in showroom-fresh condition and outline my plans for it.

And I hope to god the car tells me its name here soon. Because calling it “New Guy” is getting old already.

10 Responses to “Something New”