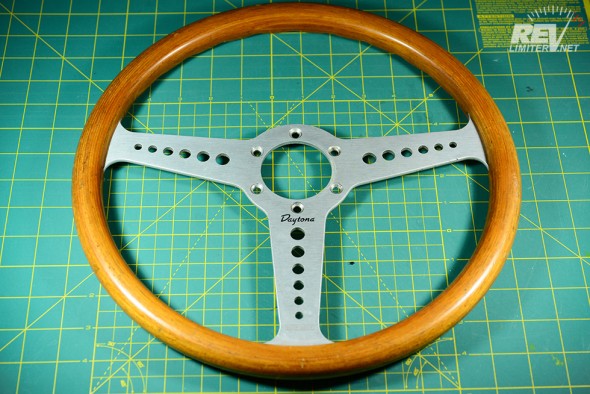 I was smitten. I bought it. It came out of an old Alfa in Singapore. A few weeks passed and DHL rang my doorbell.

The next month of my life would be spent working on this wheel. 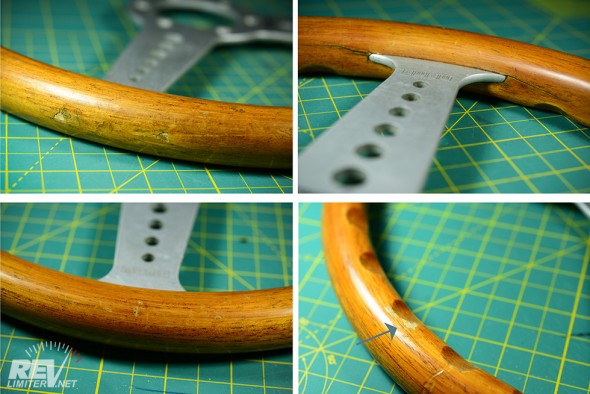 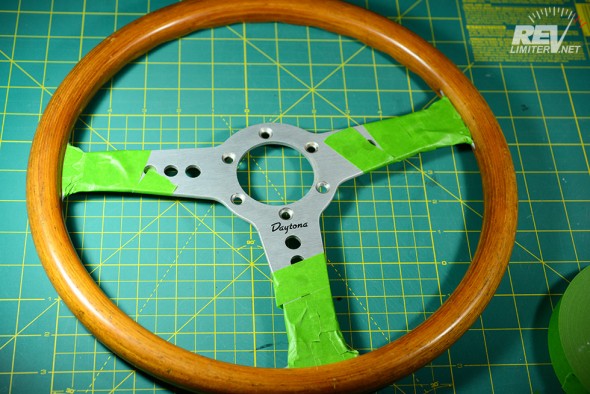 Masked off and ready for sanding.

The wheel was a bit more unassuming in person than in the ebay ad. Yeah… unassuming is a good word.

Okay, it was a plain looking, sad sack of a wheel.

No contrast. Cloudy finish. Lots of cracks on the left. Apparently the Alfa owner was married and wore a big ring. The wheel had a lot of ring damage. There were cracks at each of the spokes as well.

Out came the Frog Tape and sand paper. 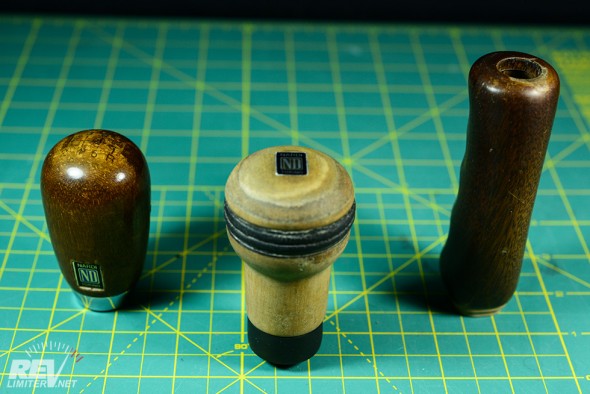 I don’t really know much about working with wood. It could almost be summed up with one sentence – “I guess I can google it?” So I didn’t really want to learn on the steering wheel.

These knobs came from a couple of sources. The Nardi NA came from Star, who owns the Crane/Sunrise gauges. The darker pair came off an NB known as Major Hater on ClubRoadster.

Quite a set, huh? Thanks again Ben and Star!!! You are both awesome. 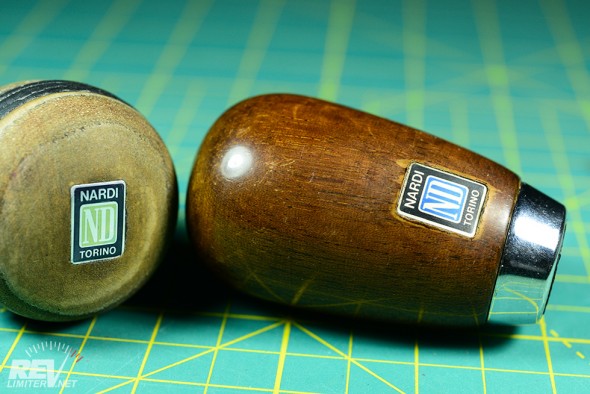 The knobs were pretty worn. The NA Nardi had been sanded a bit. Star had plans to restore it but sent it to me instead.

Perfect for learning on? I think so. 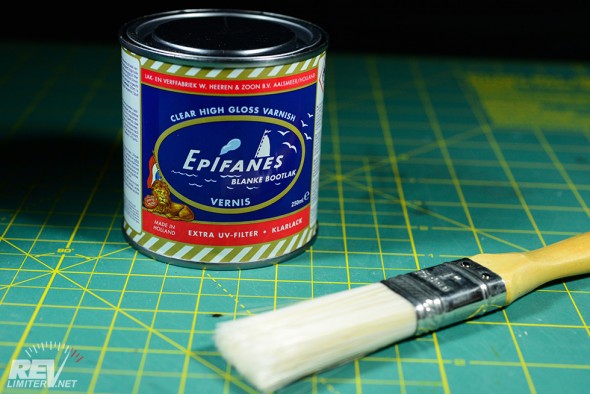 Spar varnish to the rescue.

The Googlez suggested this – Epifanes spar varnish. I got this little can from amazon. 2 days later, I was ready to spend far too much time coating wood with it.

The internet suggested it. How could I disagree? 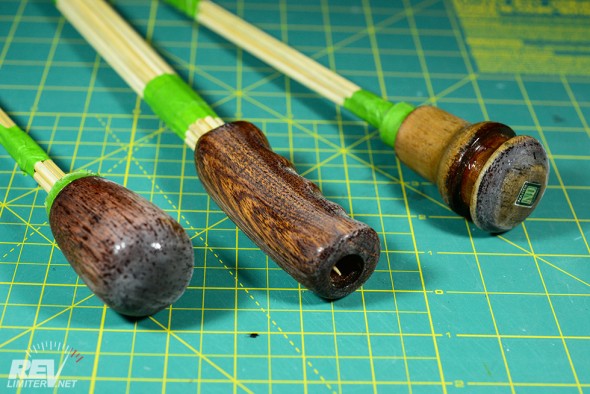 One layer of varnish applied and scuffed. 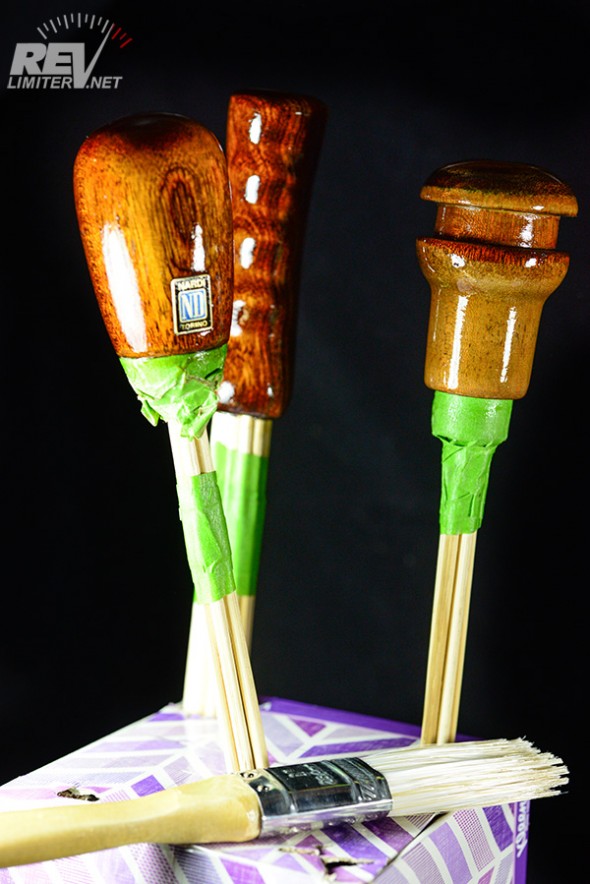 So, I spent a month learning about varnish, the application of it, the sanding of it, and all the rest.

After 3 varnish layers, I felt confident enough to start work on the steering wheel.

Back to the wheel… 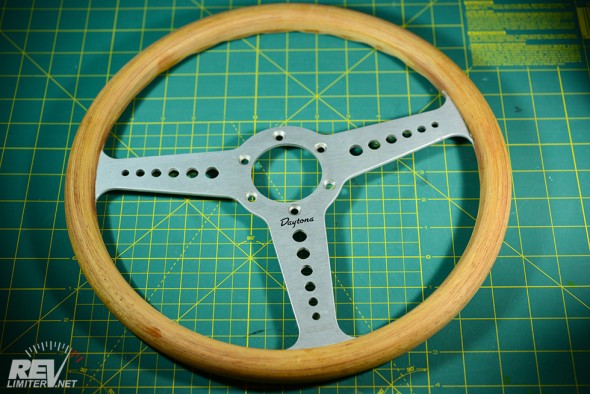 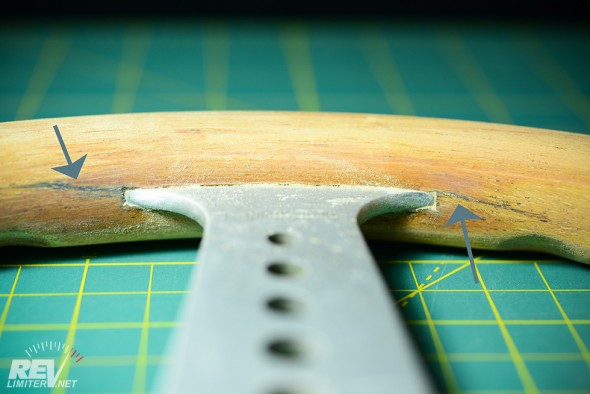 Sanding is easy. I figured that I probably couldn’t screw up the sanding. And, to my extreme delight, the cracks on the wheel surface disappeared with the sanding. None were more than surface deep. It was just the original varnish that was cracked.

But the cracks in the actual wood around the spokes? Care was needed. Back to the intartoobz for research.

The method that came up the most often was to patch the cracks with sawdust and wood glue. It would apparently match the wood grain better than some other patch material and provide strength for the cracked wood.

So I saved some sanding dust and made up some paste. I opened up the cracks ever so slightly with an X-acto knife and applied the putty.

It kinda worked. I mean, it sealed the cracks. I’m happy with the result. It doesn’t match the wood, but it worked. 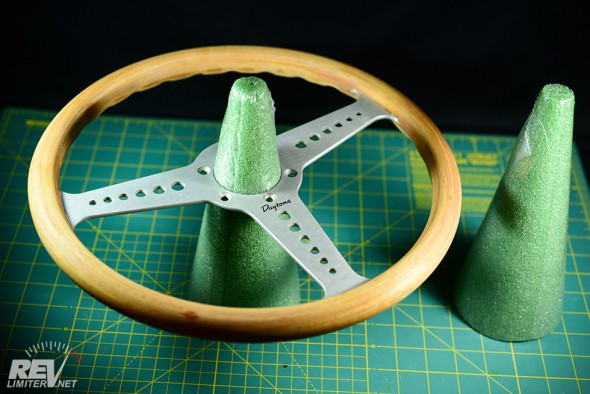 THAT is a high-tech varnish station.

How the heck do I keep the wheel from touching… anything while being varnished? That question hung in my brain for days. My wife suggested hitting a hobby store for some high-density flower foam. I could likely find something to sand into shape to support the wheel center.

I took the wheel over to the nearest craft store and immediately saw these cones. They fit the wheel center perfectly. I could easily spin the wheel on it and then flip to varnish the other side. 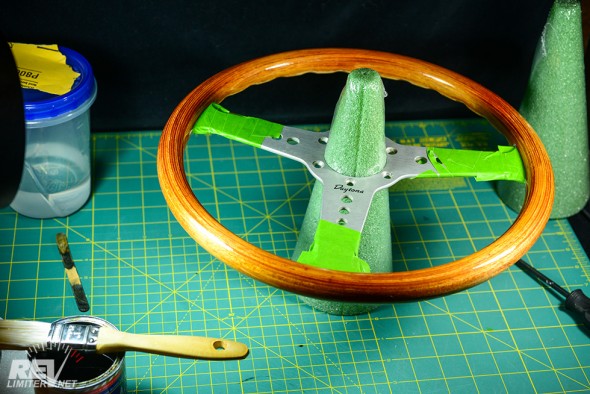 I mean, it’s wet, so it looks WAY better than it should. But only one coat and already there’s so much gorgeous wood grain visible. 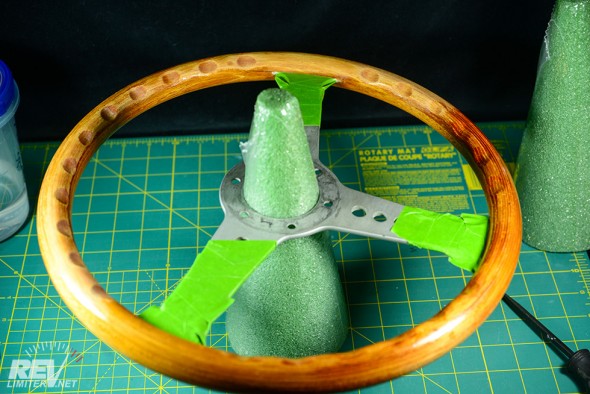 Varnishing the back side. 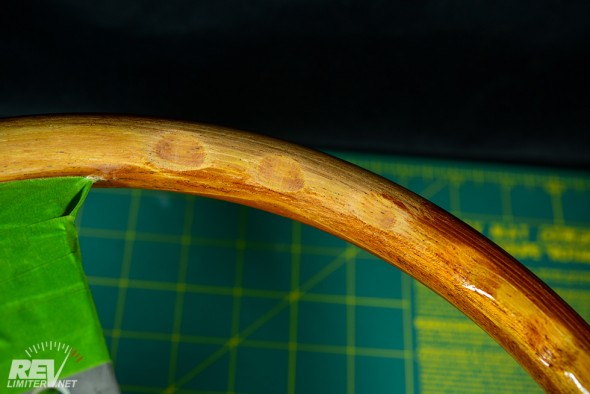 After only one coat, I was pretty confident in the direction I was going. The wheel finish was really coming up nice. All the was needed was patience.

Stuff I learned about varnish 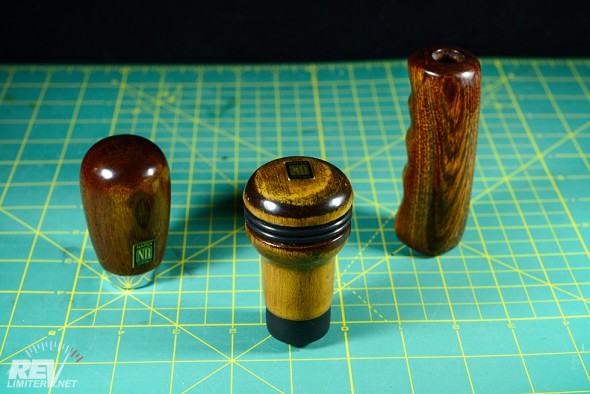 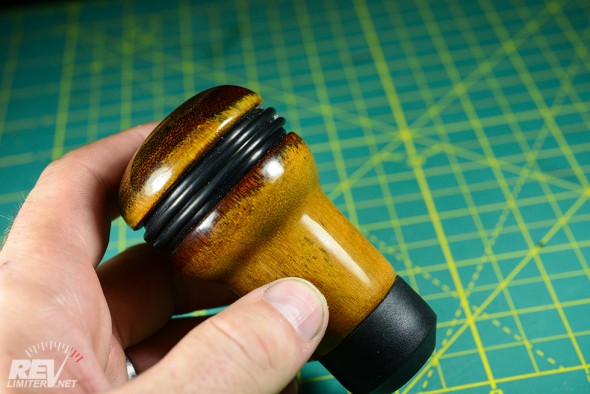 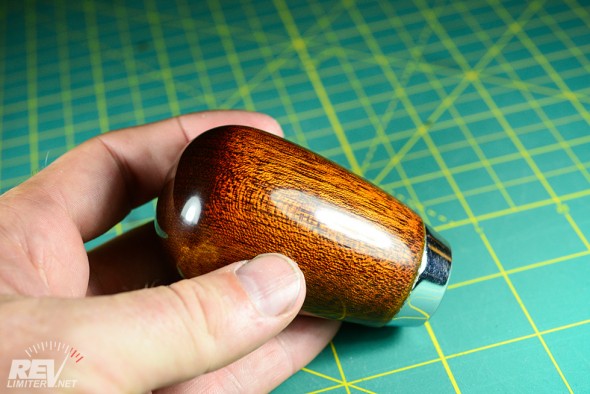 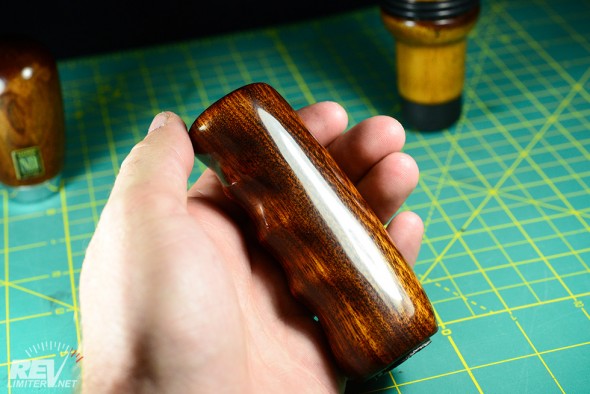 NA Nardi: 12 coats. That was too many. It started to get cloudy.

NB Nardi shift and brake: 10 coats. That was pretty much the maximum. There’s a mile worth of gloss and it feels like holding glass.

I really like the NB Nardi stuff. The knob has an excellent weight. Both are lovely and cherry colored. The NA shifter is very light, both in weight and color. Unfortunately, my steering wheel matches the NA shifter better than the NB wood. 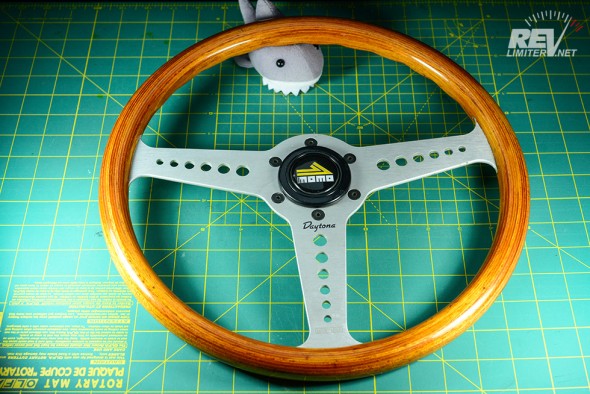 8 coats. The first 4 were pretty light. The second 4 were a bit heavier. I allowed an extra day or two of drying time between the thicker coats and sanding.

The wheel just glows. It doesn’t even need good light to do it. It has this insane finish even in shadows.

I have something obscene like 80 hours of labor spread out over about 6 weeks on these various wood items. Worth it? Hardly. But the final product is unlike anything I’ve ever seen. 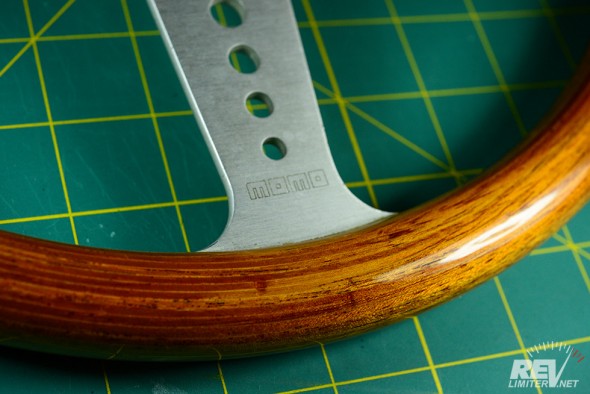 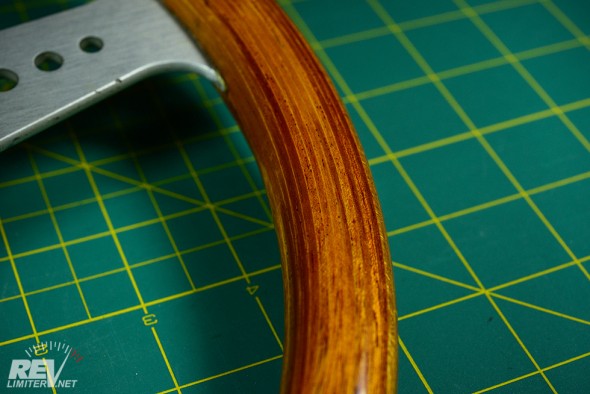 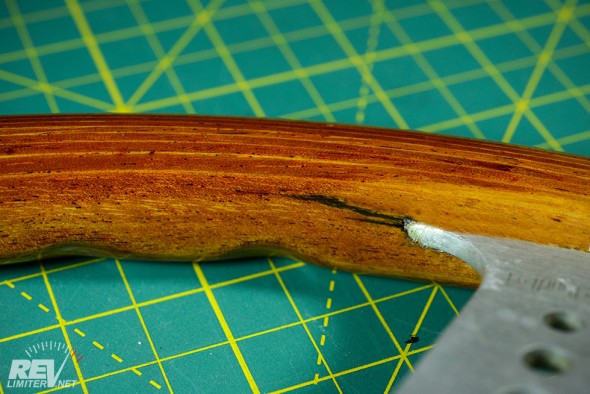 Let me talk about that finish. It’s doesn’t feel hard, like wood. It feels incredibly soft and smooth. The wheel finish is indescribable.

I installed the wheel in Sharka and stepped back. It looked horrible. I didn’t take a single photo.

I drove a mile. It feels horrible. The grip is super thin. The wheel feels like a boat wheel – huge. It’s only 350mm, but the thin grip makes the whole thing feel like driving a school bus.

The wheel came right back out of the car. It’s hung on a nail in my office ever since.

It took me until October to even blog about this. The wheel was THAT disappointing to use. I did all of the work above in April and May. I was too disheartened to type about it until now.

You can’t win them all.

And I put too much work into the wheel to consider selling it. It’s too pretty.