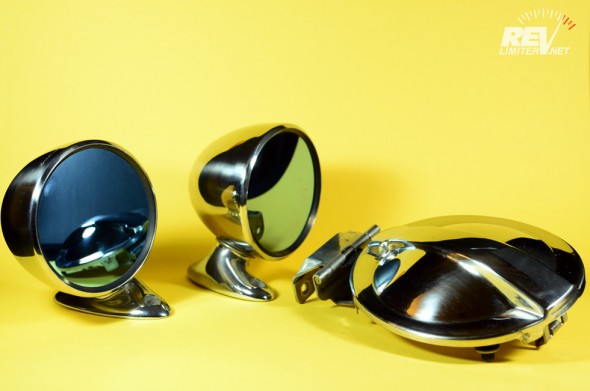 A while back, I simplified Sharka’s bodywork. No more side stripes, no more air splitter. It felt like the right thing to do in order to move forward. Taking a step back, you know? It’s sometimes good and helps bring a fresh perspective.

The parts above are vintage Runabout (.co.jp) pieces. Runabout M2 mirrors and Type 1 fuel lid. The gas lid is long discontinued and the mirrors, while still available new, aren’t too common here in the US. They’re Runabout’s replica of the M2-1001 mirrors.

These all came from Rooster. Perhaps you remember Rooster? You know what, a photo is required. 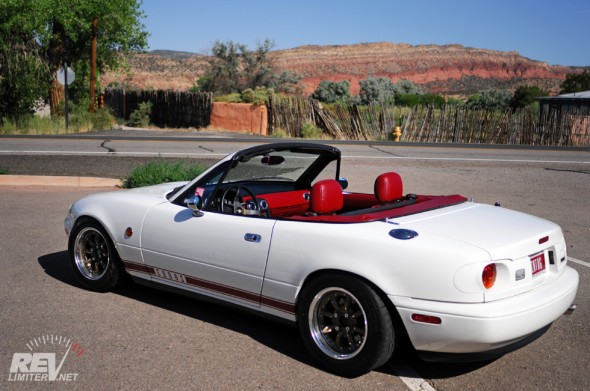 Before the sale, he contacted me and asked me if I wanted any of the parts. A quick viewing of his CR build thread had me wanting the Runabout exterior set. The mirrors are items I’ve been considering for a while and the matching fuel lid was too much to resist. Steve gave me an excellent price. 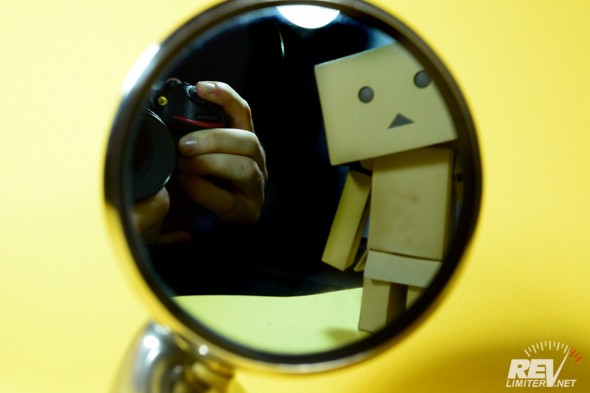 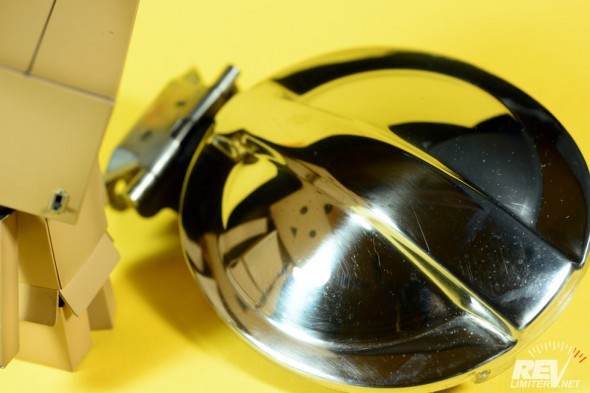 The parts are lovely. Obviously not new. They have a nice patina from a decade or more of use.

The Runabout mirrors feature this nice blue glass and have a slight convex quality to them. They’re not extremely wide, but they’re not flat glass either. However, I had immediate plans to upgrade the mirrors. 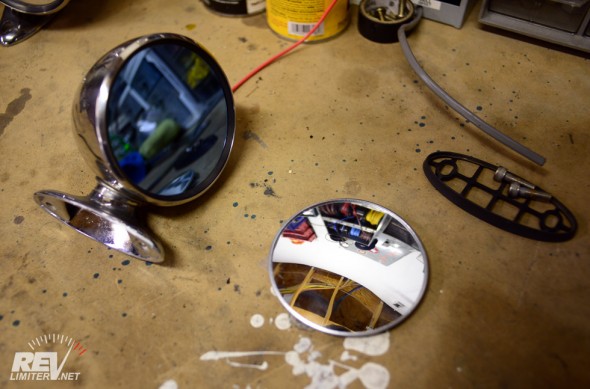 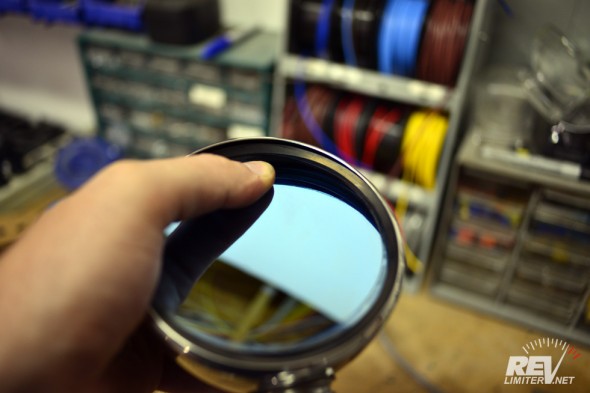 Just press the blue glass back a bit… 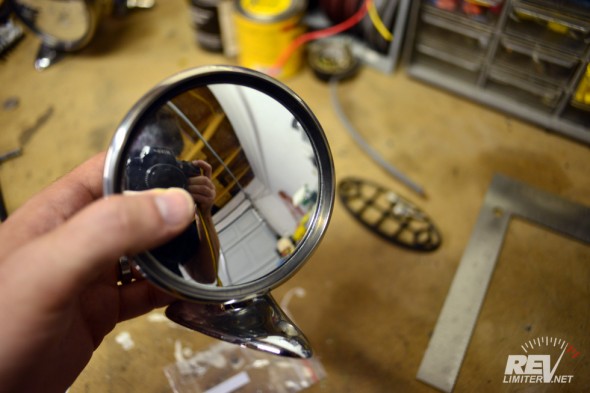 … and slide the bubble under the rubber seal.

Before even installing the mirrors, I had some custom bubbles on order. I found an ebay vendor that offered cut glass from China. Sure, the blue glass was cool, but I wanted field of vision. I wasn’t going to do a repeat of the 1028 mirrors and rip them off a couple months later because they sucked.

The installation of new glass in the Runabout mirrors is super easy. The glass is held in by a large spring and a rubber seal. You just press back on the glass and you can either remove the seal and glass together, or you can slide another mirror underneath. The result looks perfect, like the mirrors originally shipped with convex glass. Pretty pleased.

And I can always remove these convex ones and go back to the blue glass. 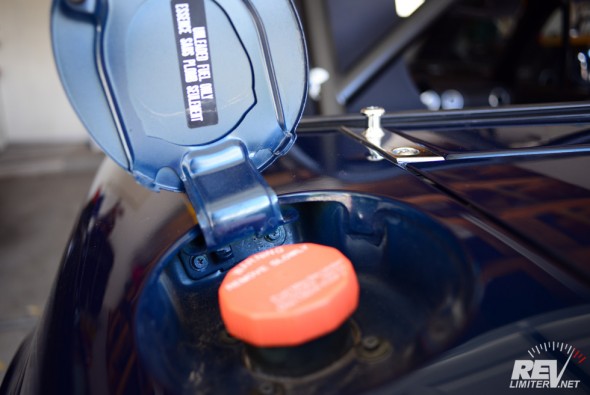 Two screws and the fuel lid comes off. 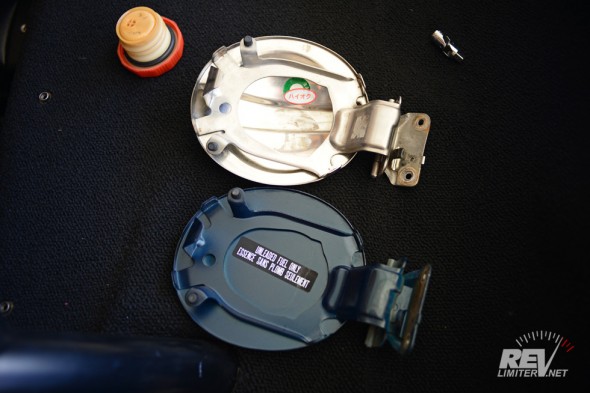 Pardon the slight detour. I wasn’t sure where else to put these. I installed the fuel lid at the same time – one of the few OEM parts I’ve never touched. I’ve had the entire neck out of the car while trying to eliminate gas fumes, but I’ve never had the lid off. Just two screws hold it on.

Use a socket to remove the lid. I tried to do a screwdriver and the bolt just stripped. Fortunately, it could be removed with an 8mm socket. 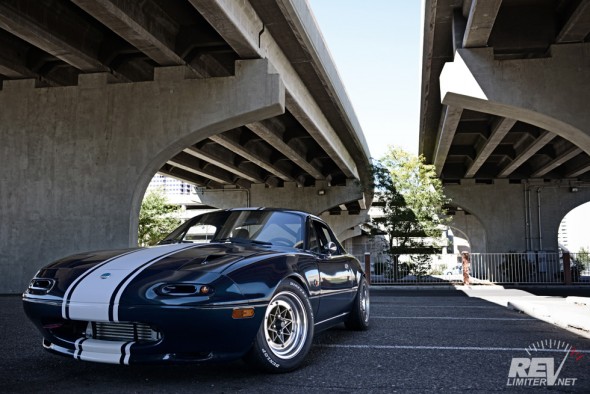 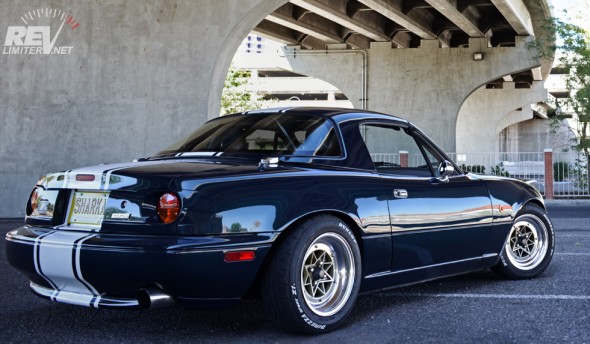 So, I installed the mirrors. Annnnd… I wasn’t completely happy. I had a vision of Rooster in my head. Sharka with the silver mirrors didn’t match.

The problem is the montego blue paint. It’s just too modern a color to go with very much brightwork. Shiny mirrors look nice with white. Or black. Even red. But a green/blue mica paint job? The mirrors suddenly look like they’re trying a bit too hard.

To be honest, they look pretty good with the hardtop installed. I originally installed them in the warmer months with no top on Sharka at all. The mirrors stuck out like a hangnail. But adding the hardtop really helped things. The photos above look pretty decent. Still, there was room for improvement.

They needed to be painted. 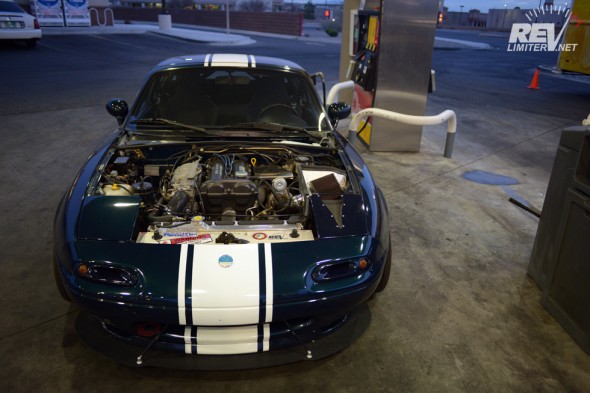 After having the idea for paint, I took a quick inventory of Sharka’s bodywork. The NACA duct headlight lid I made years ago was getting pretty ragged. The paint sucked and the CF was clouding pretty badly. 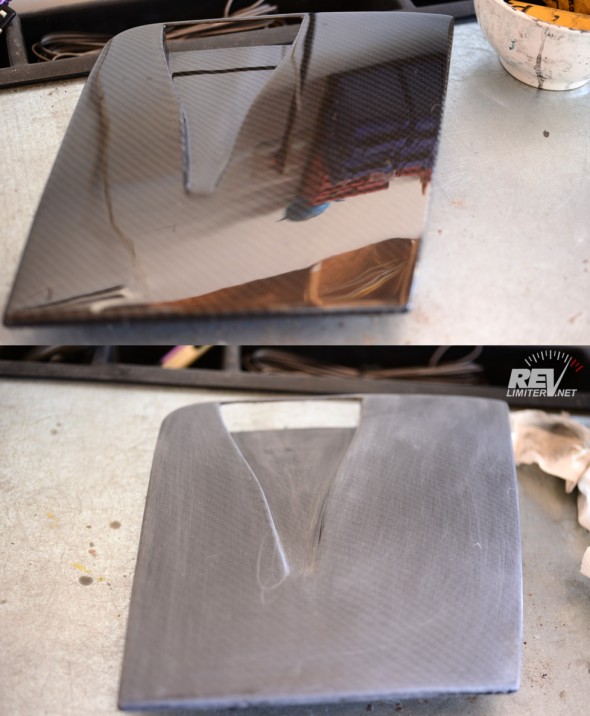 A bit of scuff for this old CF headlight lid too.

Many years prior, I designed a NACA duct headlight lid for a 3rd party company (honestly can’t remember the name). I calculated the angles, cut the lid up, and made walls for the duct. I even smoothed the outlet so that there wouldn’t be a large lip for the air to hit. The lid worked with both the OEM lights and the Moss lowpros installed on Sharka. It was pretty sweet.

I shipped the plug off and received this prototype carbon fiber headlight lid as payment. And then nothing came of it. The lid was never put into production. The duct I’m replacing now was new at the time with fresh paint, so I didn’t swap it out for this carbon one. My prototype lid hung on the wall of my shop for years.

I test fit the prototype and it was perfect. Much better than my bent ’97 lid. I decided to finally get some use out of this part, so I scuffed it up so that I could paint it with the mirrors. 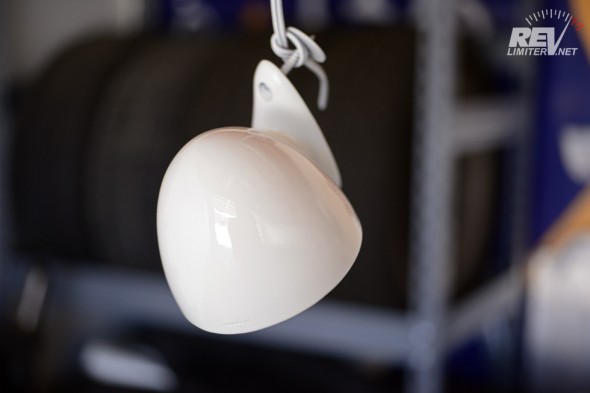 That’s the only paint photo I took. Sorry.

I used some rattle cans from paintscratch.com. They are pretty well priced and come as 2-part paint, both color coat and clear coat. It makes for a better match than using a one-part rattle can. I’d considered buying a gun, but thought I’d just do a rattle can job for small parts like this.

And here’s the result. 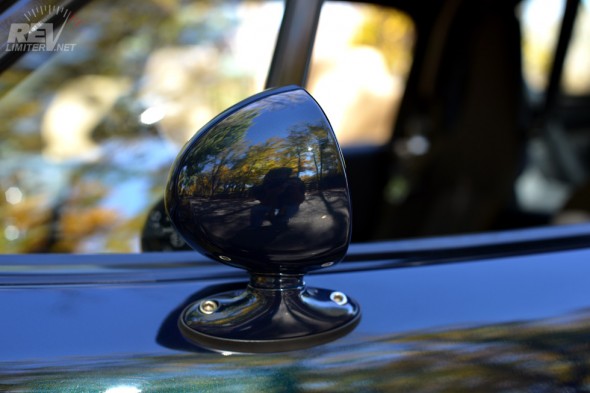 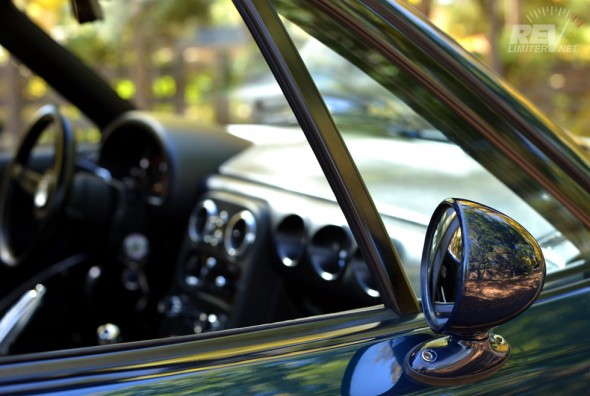 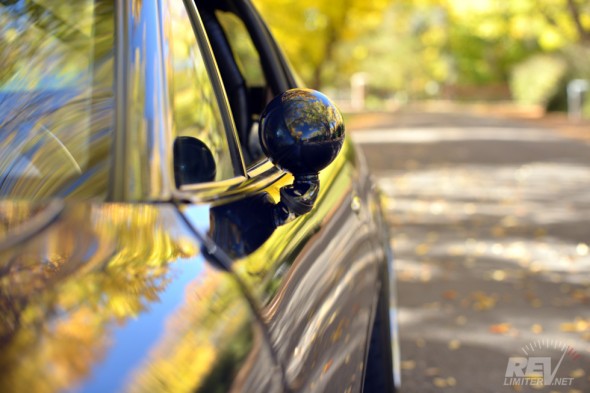 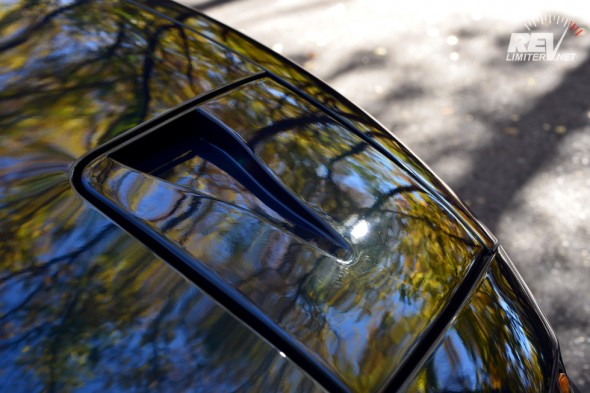 There’s carbon fiber under that paint. 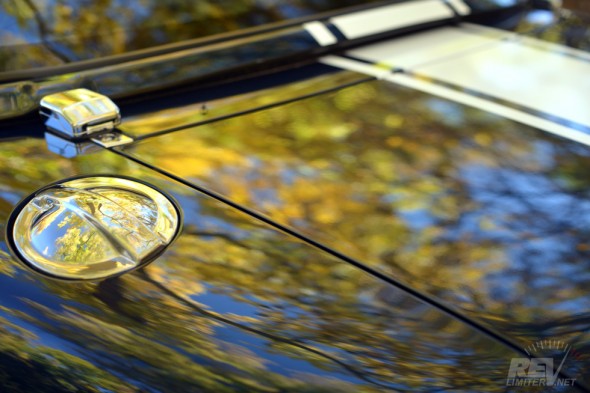 The paint came out great. Not perfect in every lighting condition at every angle, but very very good. I’d recommend paintscratch cans to anyone.

I’m especially happy with the mirrors. They’re so subtle. So understated. They don’t stick out like the factory ones. No more mouse ears. Just these gorgeous, refined shapes. I feel they work with the rest of the body much better than the large OEM models.

The fuel lid… I’m on the fence about it. I like it, but I can see removing it in the future as well. I’m not completely sure. It does work well with the hardtop feet. I’ll probably swap it in and out with the OEM fuel lid. So many cars come with metal lids now days, it almost seems like a body-color fuel lid is a modification.

You probably noticed the leaves? We actually had a real fall this year. The leaves didn’t just fall off in the beginning of October. I took advantage and did a nice shoot. 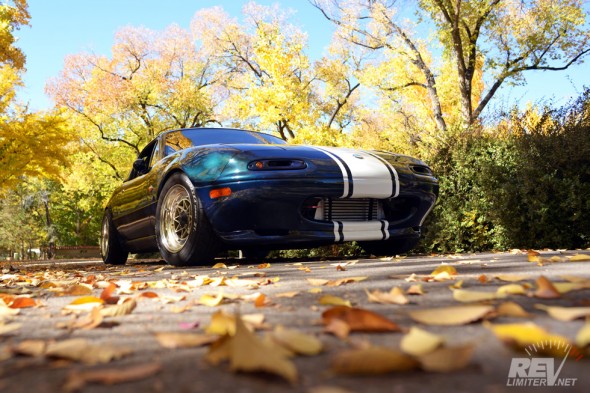 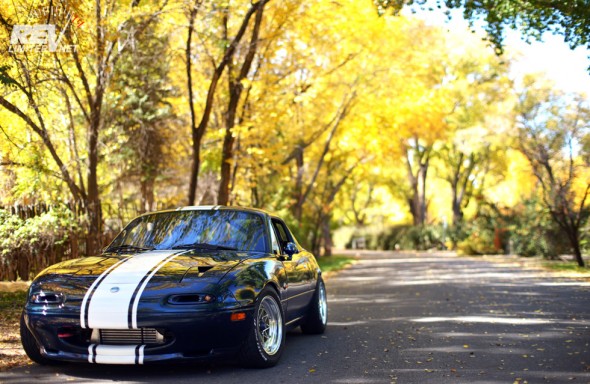 The mirrors are actually the subject of this shot. 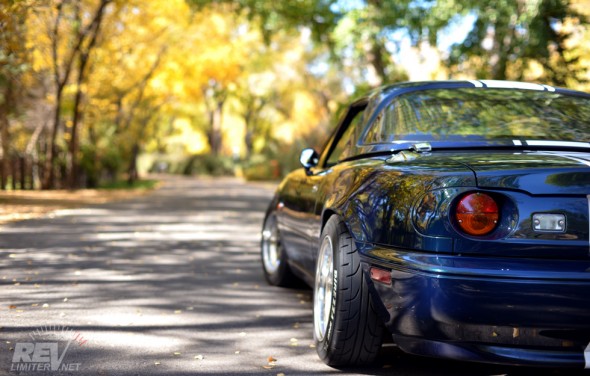 Ignore the trees. This is clearly about the mirrors. 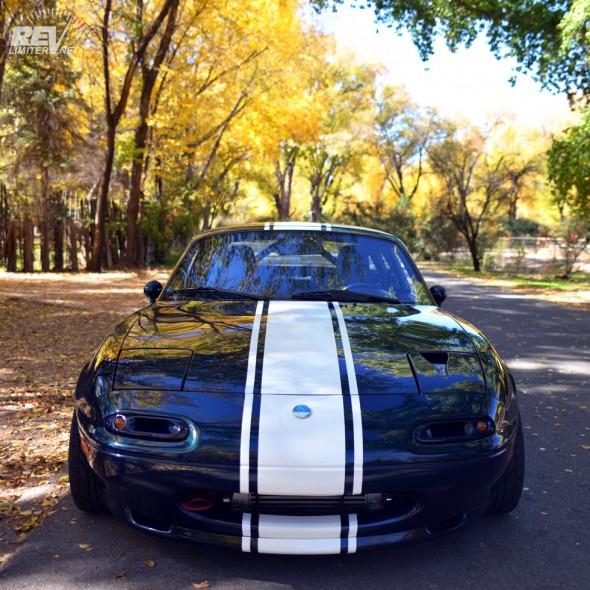 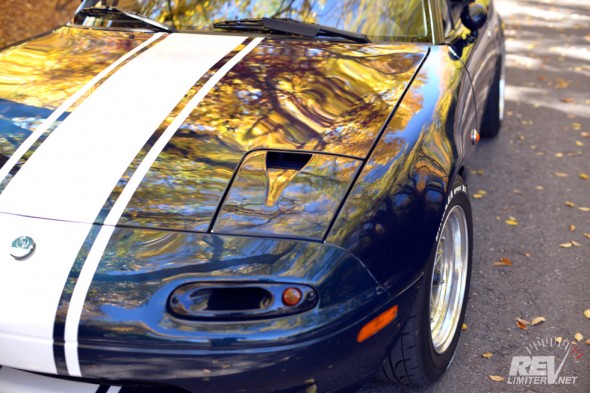 But, to me, this feels like a big upgrade. Like a few rough edges were removed and the result is greater than what existed before. 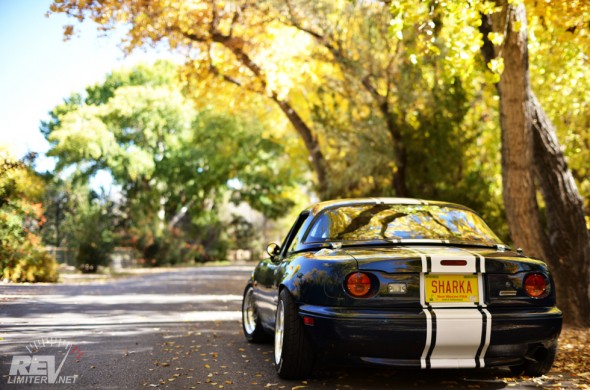