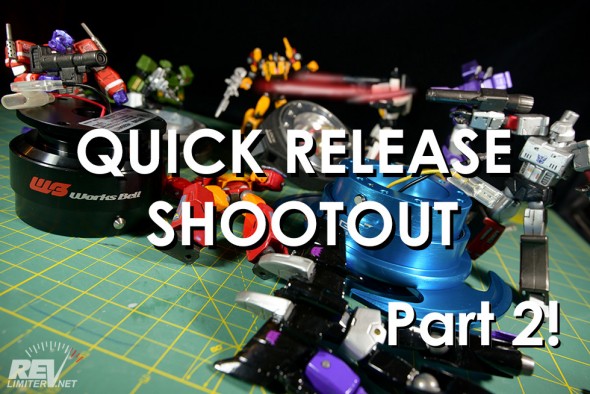 Here’s Part 2!! Did you miss Part 1 of the revlimiter Quick Release Shootout? Follow the link and check it out. 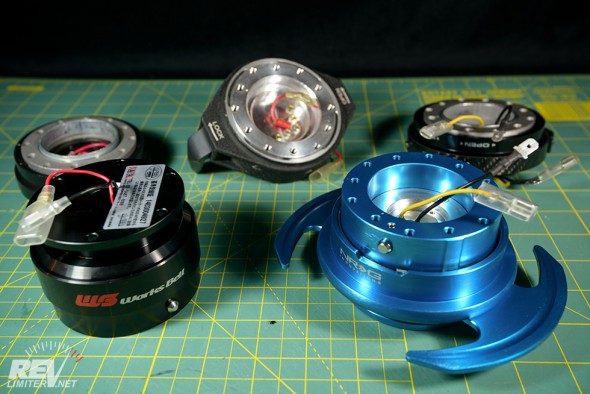 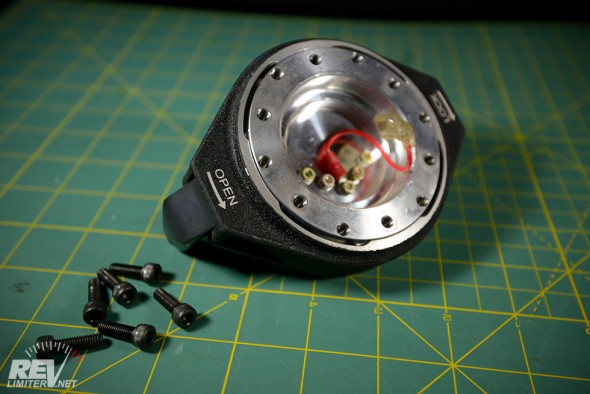 The Works Bell QRS is a thin quick release. It functions via ball bearings and a rotating interlock. The little ears that make it work are also a magnetic safety device – the QR cannot open unless the ears are in the extended position.

This QR does conduct a ground signal, so you don’t need to worry about a dedicated ground wire. Mine also has no fewer than FIVE terminals for various buttons, but I’ve seen models with only one terminal. This Quick Release was discontinued in 2013 and can no longer be purchased. No, mine is not for sale. 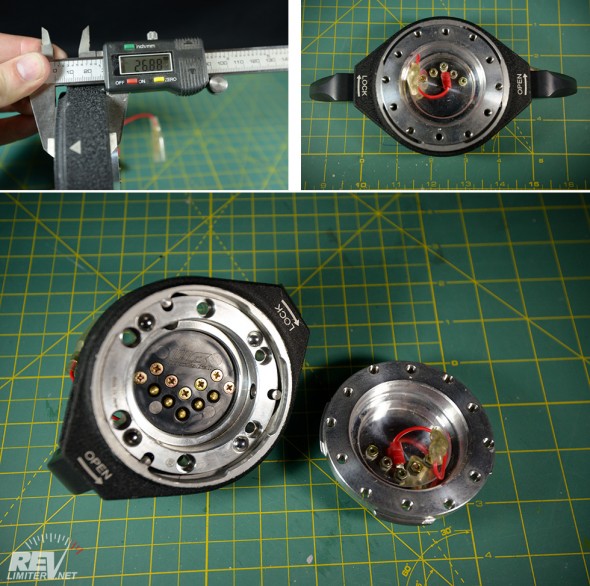 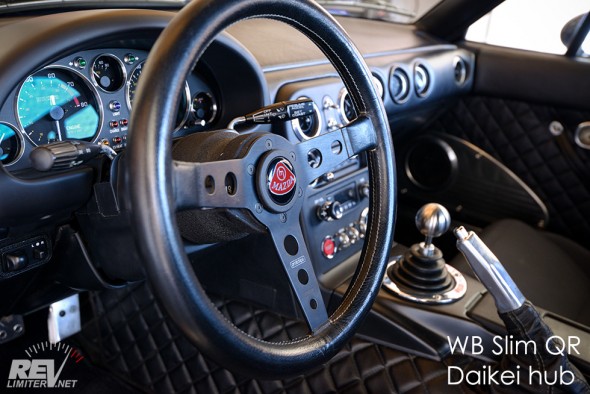 Wiring up the horn for this particular QR adapter is no more difficult than wiring a horn to a steering wheel without a quick release. One wire is all it takes. 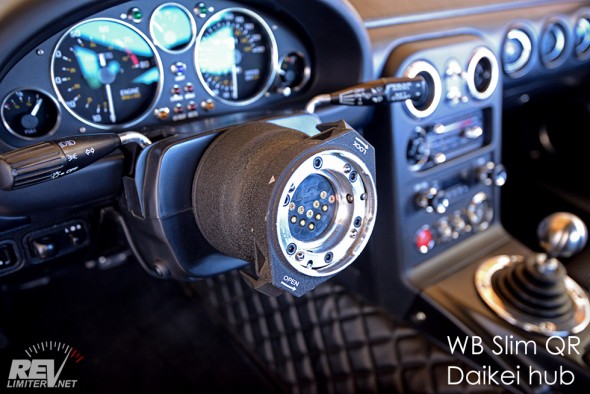 QR receiver installed in the car.

Unlike the thick QRs seen in Part 1, the thin quick releases usually have most of the guts attached to the car’s hub. The part that hangs off the back of the steering wheel has almost no weight or bulk.

With the Daikei standard hub installed, the total hub + QR thickness is ~ 4″ or 101mm. That’s only .75″ thinner than the “thick” options. 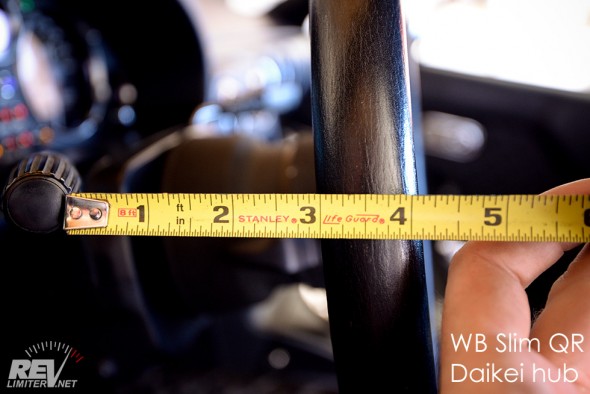 The distance from the steering wheel to the turn signal is just under 3″ or 75mm. This is roughly 7/8″ greater than the stock distance. It’s not difficult to reach the turn signal.

As you can see in the video, this quick release requires a bit more work to attach than the thick ones. You have to align the steering wheel, then grab the QR’s ears and rotate it into the locked position. Then you make sure the ears snap back against the QR (yay magnets).

The attachment is very firm and positive. The wheel feels well attached. I’m rather attached to this one too… It’s been in my car for the past eight years. I really like this quick release.

After eight years, I started to see very minor signs of wear inside my WB QRS. That prompted me to look for a spare QR. Then I discovered that they were discontinued. And then I started collecting quick releases. And that’s why you’re reading this blog post. 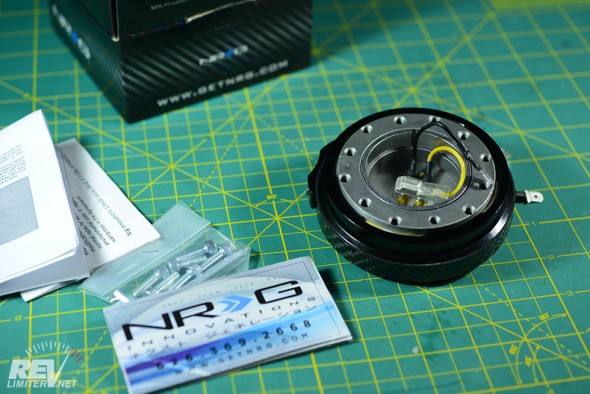 The NRG Slim / Short Quick Release is a thin quick release. It functions purely from friction interlock. This design was actually created by a company called FET in the early 2000s. 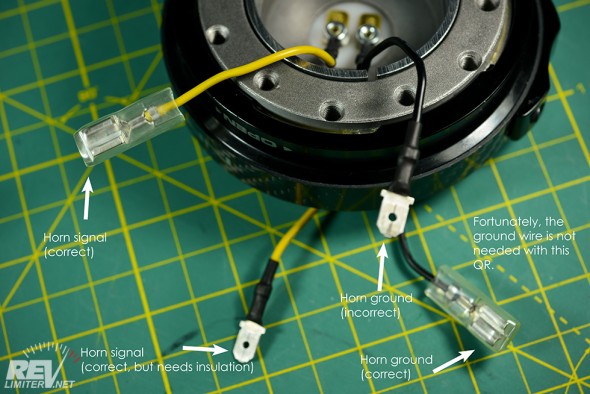 Like the example of NRG thick QR that I received, this Slim one features incorrect horn wiring. Only one wire is incorrect – the ground wire on the steering wheel side (it should be a female disconnect). However, this QR grounds through its own body… so it doesn’t even need a ground wire. 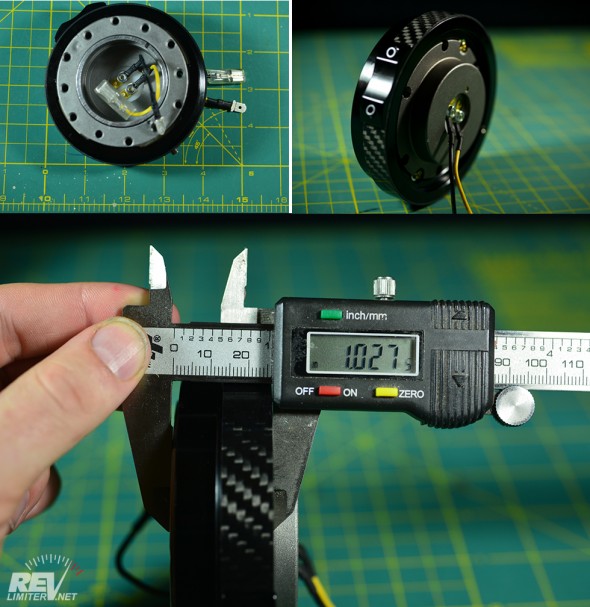 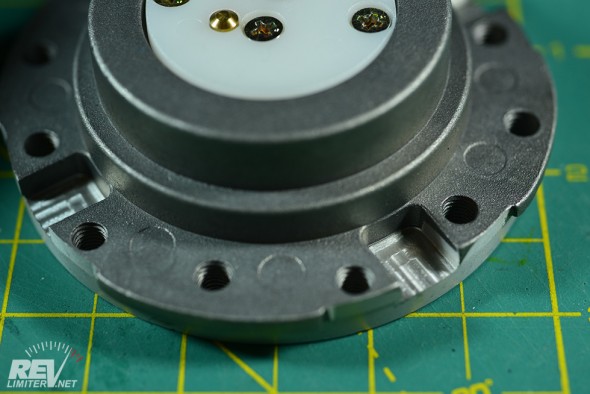 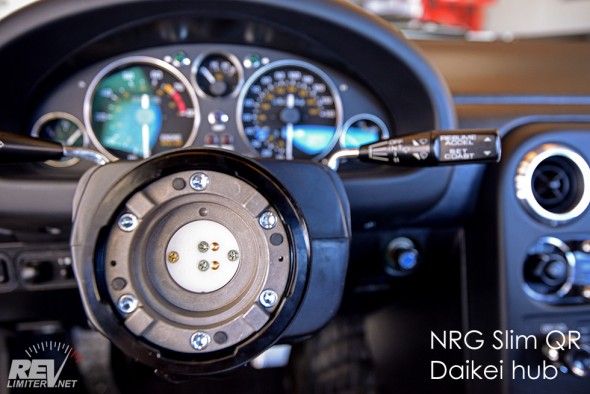 Like the WB above, the NRG slim has the receiver attaching to the car. The piece hanging from the steering wheel weighs only 3oz. 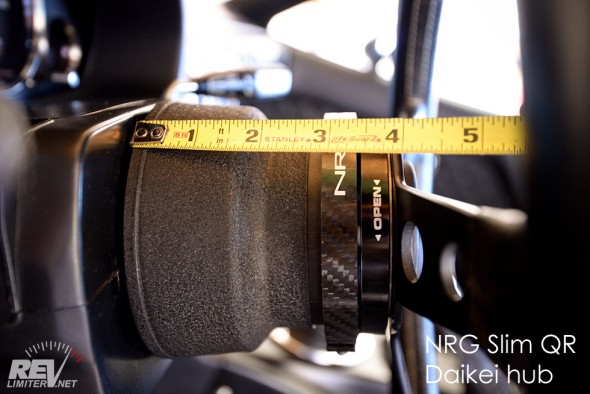 With the Daikei standard hub installed, the total hub + QR thickness is ~ 4″ or 101mm. That’s only .75″ thinner than the “thick” options. 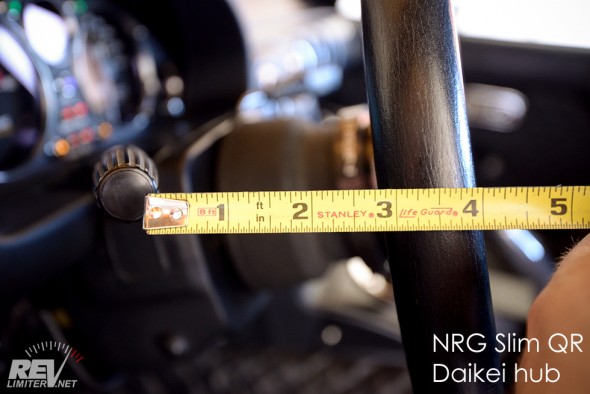 The distance from the steering wheel to the turn signal is just under 3″ or 75mm. This is roughly 7/8″ greater than the stock distance. It’s not difficult to reach the turn signal.

Unfortunately, as you see in the video, my example did not work. The quick release itself was extremely difficult to turn even without anything in it. With both halves together, there was no clearance for anything to turn or move. The half that attaches to the steering wheel needed to be planed down by quite a bit before it would fit inside the receiver.

Since my example did not work, I truly cannot say any more about this quick release adapter. 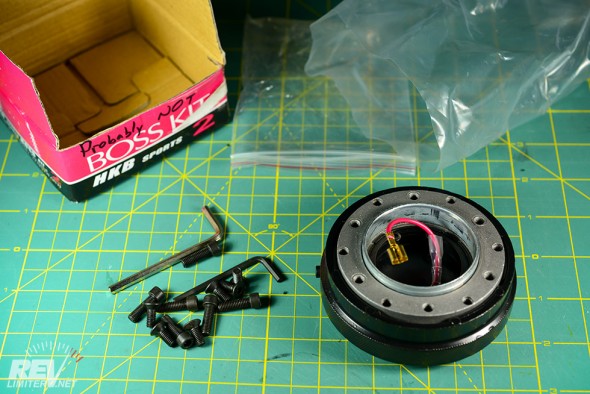 Since I had the other four, I just couldn’t resist. I had to add a fifth option – the uber-affordable ebay thin QR. It was $16 shipped.

The ebay QR has the same construction as the NRG (FET design) with the puzzle pieces that interlock together. It features a single horn wire and grounds through the QR’s body. And the horn wire? It has the right connectors on the ends. 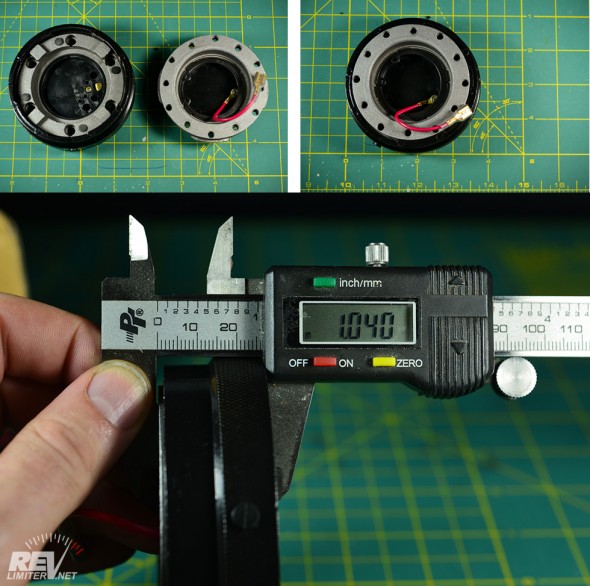 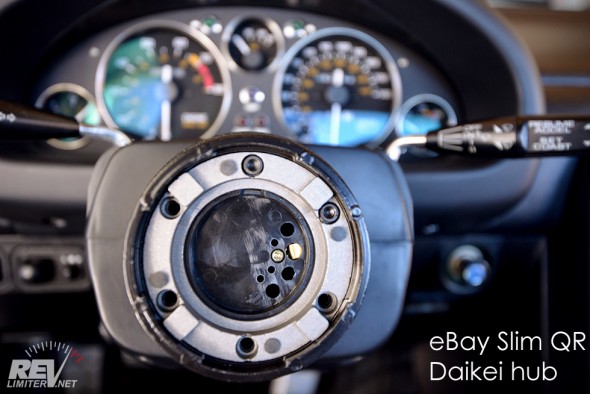 So. This little thing is the cheapest, thinnest, and lightest. And the horn wire is right out of the box. And it has all the hardware you need to install it. But keep those little floating hearts at bay. It’s not as perfect as it could be. 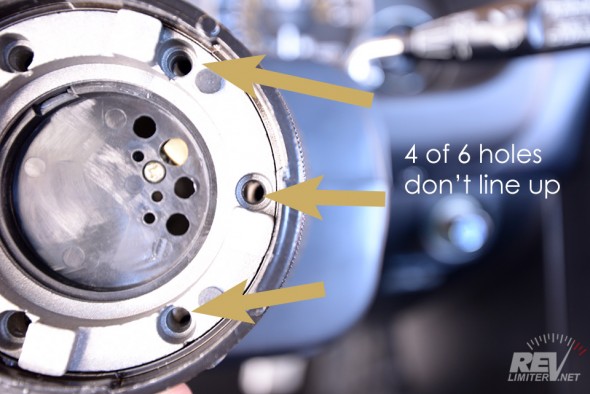 THIS is the bad news. The holes are not machined in the correct spots. Only two of the six holes will bolt up to a hub. And before you ask – yes, I also tried the Nardi bolt pattern. That one was worse. The hole pattern on this QR is not correct for either the Momo or Nardi bolt patterns.

If you drilled this quick release out, it would be able to bolt onto a hub. Out of the box? It does not work. You can’t actually drive with it. 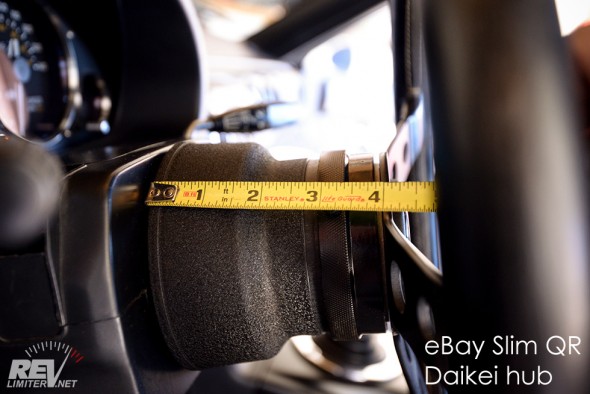 The piece hanging from the steering wheel weighs only 3oz. 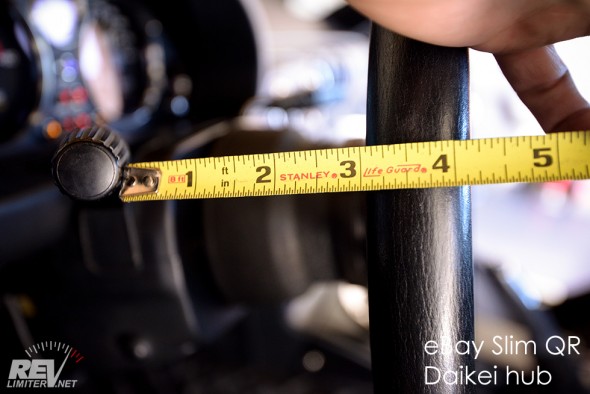 With the Daikei standard hub installed, the total hub + QR thickness is ~ 4″ or 101mm.

Since everything did actually work aside from the QR bolting onto the hub correctly, I can give some observations about this quick release. The attachment method is really not difficult. Aligning the wheel into the receiver is easy and spinning the locking collar with one hand is also easy. I would have liked to take a test drive with this quick release, but having only two bolts in the hub (and they’re next to each other, not on opposite sides) made me not want to risk things. 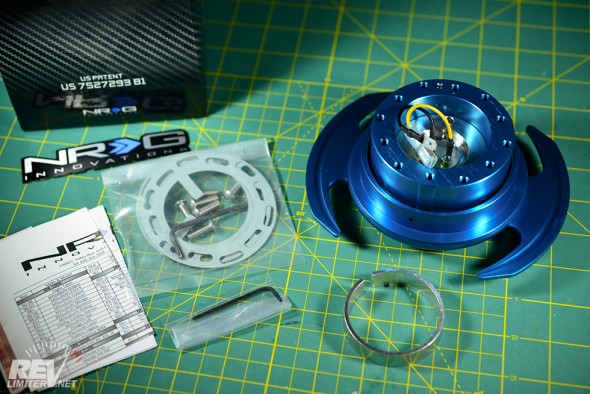 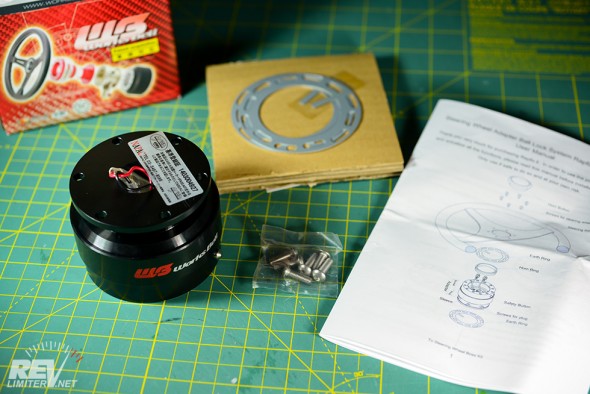 I have a pair of hub adapters… I might as well review them, right? I did a separate post for those as well. Go to the Hub Comparison to see a Daikei vs a Works Bell.