There I was, driving along, minding my own business, with a trunk full of groceries. Nothing special about the day or the road I was driving on. I’ve driven it a hundred times. I look down at my gauges, and see that I’m doing zero miles per hour.

The wind was whipping past and I was passing someone in the lane beside me, and yet I was apparently doing 0 according to the speedometer. And then it suddenly sprung back to life. It worked for another mile and then was dead again. 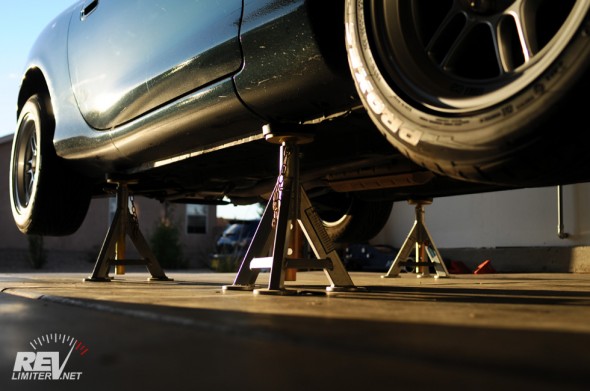 Securely in the air. I love these huge tripod stands.

I assumed the problem was me and my penchant for changing gauges every few months. In Sharka, I’ve gone through a tach and a fuel gauge in the past four years. They just… broke. But the speedometer on Bucky was a different story. See, I did a bit of research before I tore my gauge cluster out. The internet message boards reported that there’s a speed sending unit that needs a bit of love from a soldering iron to make work again. Heat and vibration makes them come free after a 10 years or so.

Solder a couple wires? I can do that.

By the way, the sensor is rather spendy. $200ish from the cheap places online? Yikes. That’s a little high. I thought I’d try my luck with the melted metal first. 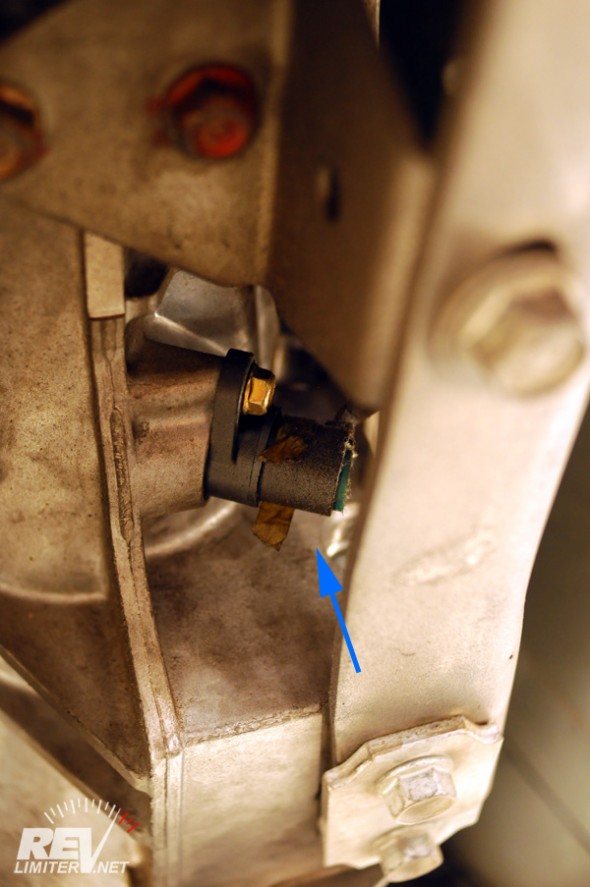 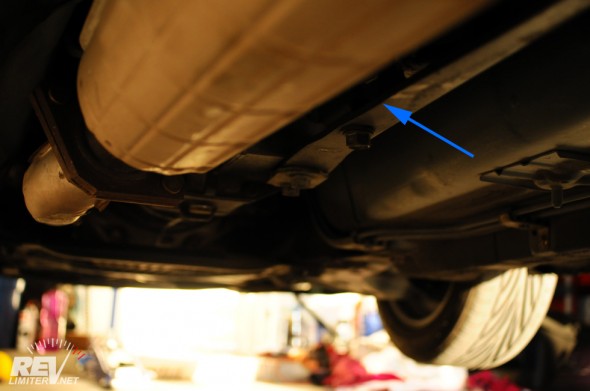 This is the object of today’s project. It’s a little generator in the passenger side (starboard/right side) of the transmission tail area. The second pic shows the location as best as I could. It’s near the middle of the catalytic converter.

YOU WANT TO ONLY JACK UP THE REAR OF THE CAR. I put all four corners in the air. A small amount of transmission fluid will come out of the hole after you remove the sender. You want the tail to be a bit higher than the nose. Just jacking up the back end will do that. Or you could have your jack stands staggered a bit.

If you jack up all four corners evenly, you will want to have a catch pan nearby. Not much oil leaks out maybe 1/8 of a liter. But it’s enough to ruin your shirt. 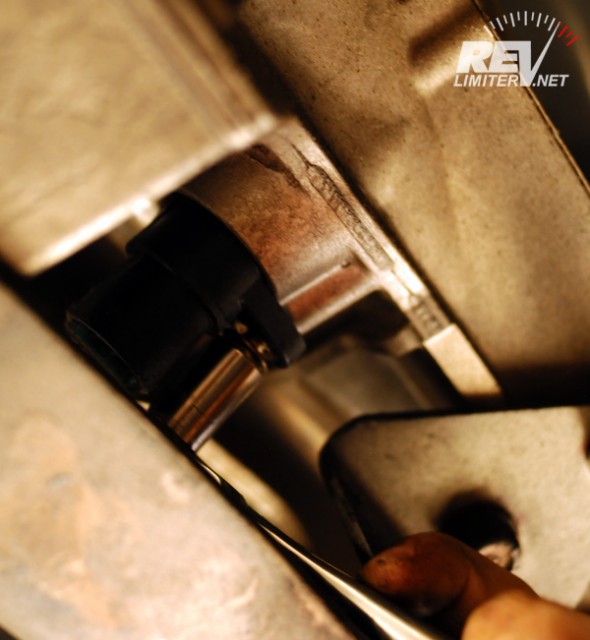 There’s not much room to work with, but there is enough. You could use a box end wrench or a thin socket combo. I’m using a thin 1/4″ drive ratchet and standard length socket. They were the perfect fit. One bolt holds the generator in the trans case. There’s not much to it. 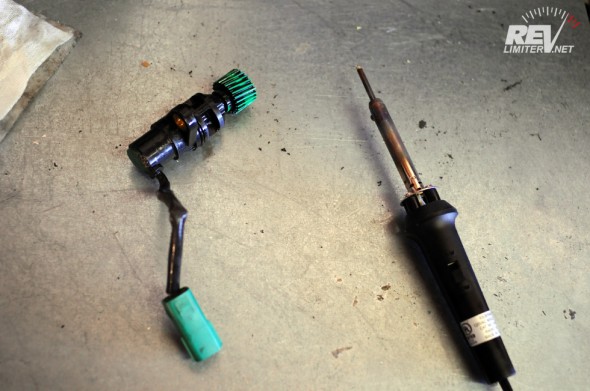 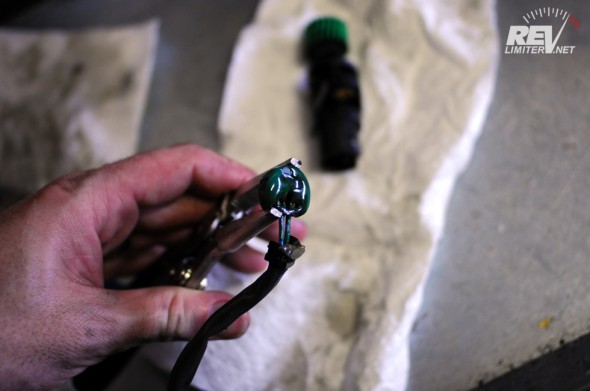 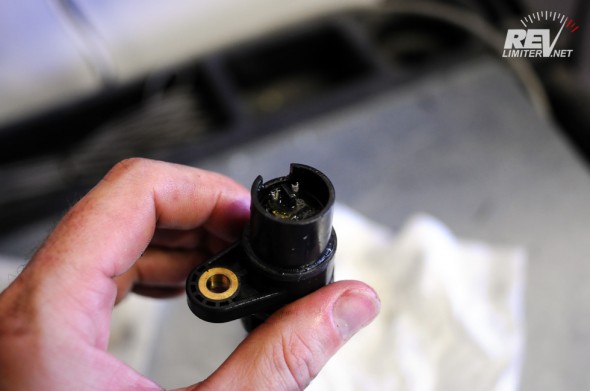 They used to be soldered to this.

The act of removing the little green cover will most likely remove the wires for you as well. They did for me. The green stuff is like a slightly gummy plastic. I was able to dig channels out of it for the wires with a very light application of an Xacto knife.

My reading online indicated that the wires weren’t soldered well at the factory. Too much silver in the solder or something and not enough heat? Very likely I “fixed” them the same bad way the robot did at the factory. I used some high-silver-content solder and only a 30W gun. But, to spoil the ending, it worked. Maybe it’ll stay working for another 10 years? 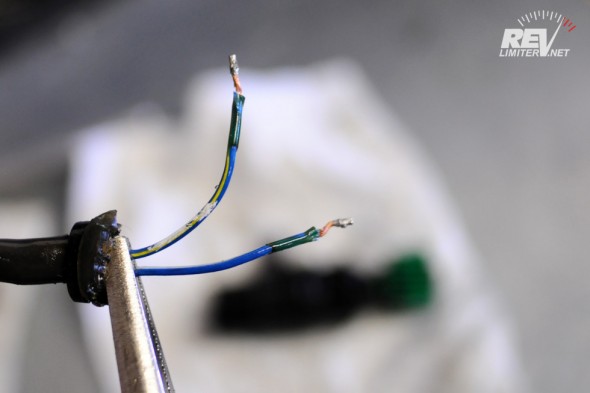 The two wires. Mark which one went where.

I’m not sure it makes a difference which terminal connects to which wire, but I marked them anyway. I’d hate to do all of this work and get something backwards.

To solder, I held the wires with a needle nose vice grip and the generator body with a panel clamp. Nothing special, just something to give me an extra pair of hands. I’m sure folks that regularly play with circuit boards will be laughing. 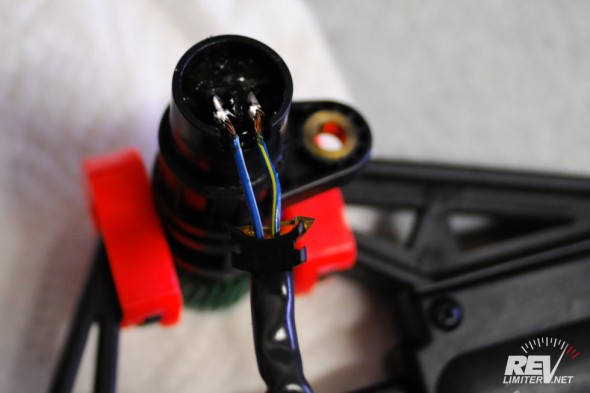 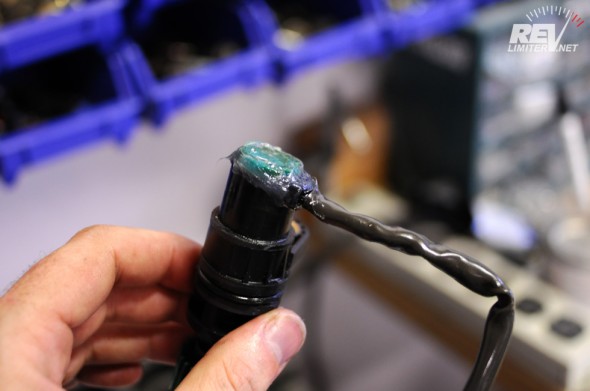 A little solder and a little silicone. That’s all you need to finish this off. I couldn’t get the green plastic to seal again without the silicone, but with it, the connection should be quite decent.

And that’s it! Plug the sensor back in and cross your fingers as you pull into the street from your driveway. I had no problems. Since doing this fix, I’ve added about 500 miles to my odometer. No bad speedometer behavior has been noticed since.