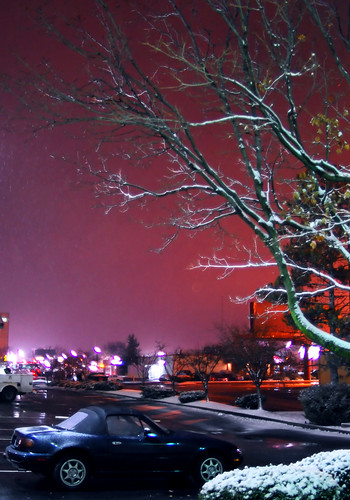 Prepare for some inane, immature, car-guy ranting and gushing.

My day started at 4:15 am. I didn’t sleep really well. I kept dreaming of things like not being allowed on the plane with all my tools (which were checked) and not being allowed to land due to the ice and snow and the car having been in a wreck on the way to the airport. It was a crappy night.

And my plane out of Albuquerque had a mechanical failure on the runway (lost the whole nav system) and was delayed an hour. Fortunately, it finally took off and landed at Denver with a good 10 minutes for me to sprint from one gate to the next. I didn’t think there was a chance in hell of my luggage (tools) making it too. I was at least on the flight to Columbus and eager. We took off on time. And to cut to the chase, my luggage even made it.

Did I mention the snow in Ohio? Yup. White stuff. yuck. But we even were allowed to land and everything. yay!

I met Doug Hagge – of Hagge Auto Sales – (to which I would link if I found a site address) at the airport in a Ford SUV. Drove back to his lot. And there it was. THE car. The car. The car. Even under a dusting of snow, it was great. Perfect. Better than perfect. He pointed out the 3 tiny dings on the car. I seriously wouldn’t have found them until a complete detailing next spring. Tiny. The car is perfect. Then I opened the door and looked inside.

The interior is beyond perfect. It is new. The seats are black black (they turn grey pretty quick if left out in the sun with the top down). The carpet is perfect. The floormats look new. It SMELLS new. Well, new-ish. That’s probably thanks to the new plastic rear window. It is better than any NA Miata I’ve ever been in.

So, everything was squared away, money-wise, and then I plugged in the GPS and went to the hotel. And here I am. I’m tired, and yet I feel triumphant. I’ll sleep well tonight.

I got my Sharka back.