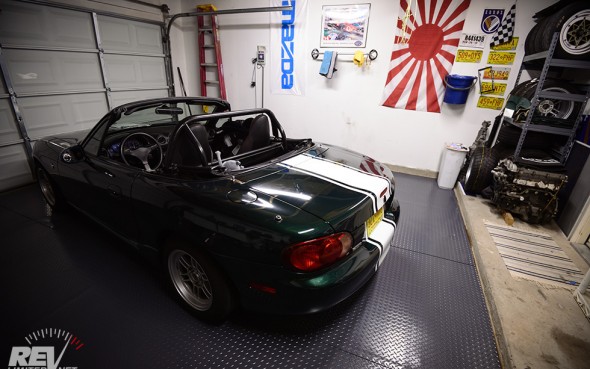 How’s summer camp? I had the strangest dream. I dreamed that they stripped off your parts and paint. You were a sad little thing that I didn’t even recognize. Isn’t that strange? It was such a vivid dream. Almost like I was there.

Anyways, I’m writing to let you know that you don’t need to hurry back. It’s a little lonely by myself, but I’m managing. And don’t worry about Driver. He’s not going crazy anymore. Nope. He’s been… wonderful.

Ignore my red tail lights. Driver didn’t spend all evening working on me.

Hope camp is good and you have good… um. weather?

And the cars call me “Driver.” Who knew? 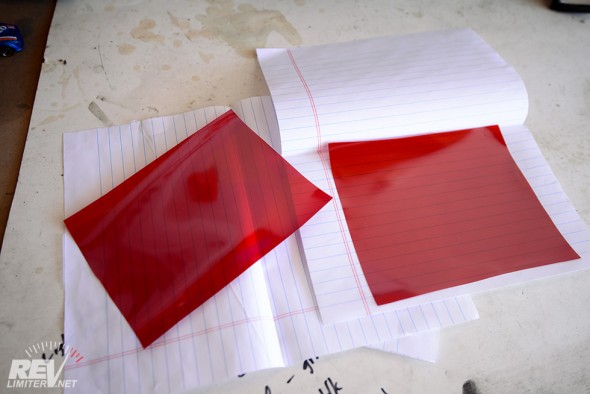 A couple weeks ago, Geoff sent me a few squares of red translucent film. It seemed like the perfect time to apply them, so me and my X-acto knife hit the garage and started work.

The film is to get more of an all-red tail light effect. It goes over the clear turn signal portion. Sticking it on is easier than painting the lights and if you don’t like it, you just tear it off. 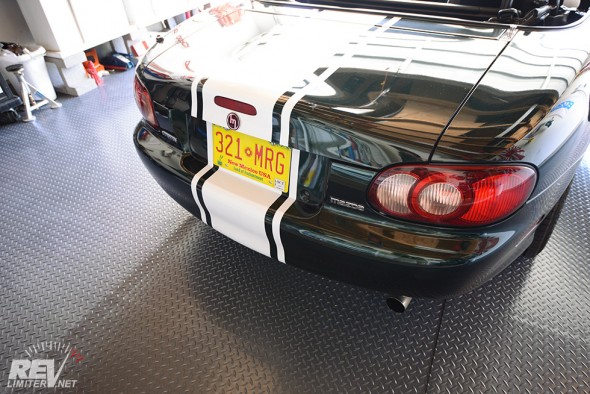 Ignore the garage floor. Seriously. There will be a blog post about it in a week or so. It’s not finished. I have to let it lay flat a couple more days before trimming the overlap sections and taping it down.

Just pretend the floor is not interesting at all.

This part is about the tail lights. 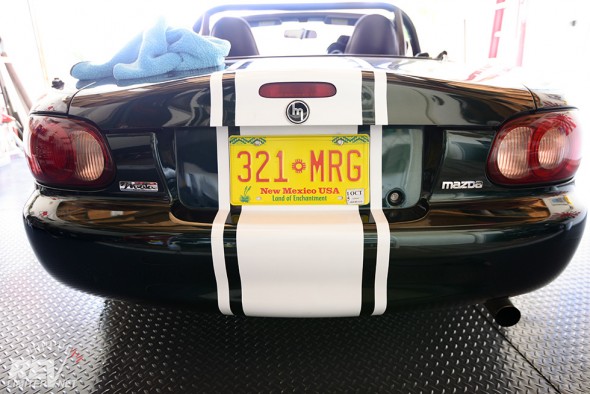 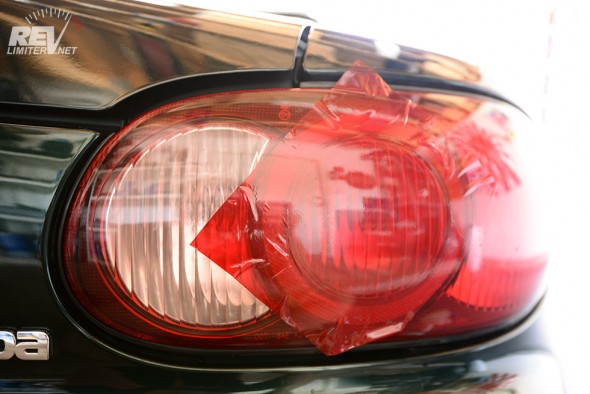 Film stuck on and smoothed out. 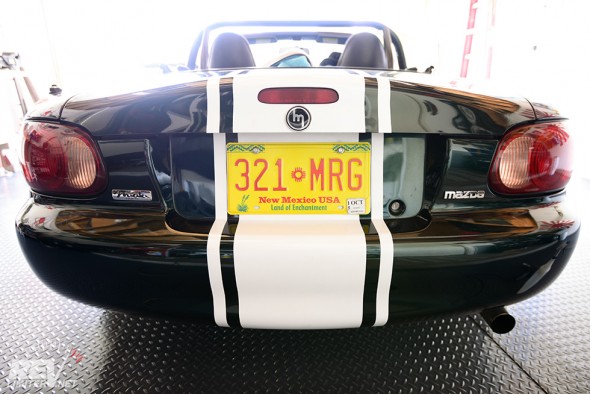 The film is very easy to install. Nothing like striping a car. There’s not much to it.

1: Spray the film and CLEAN tail light with slightly soapy water.
2: Stick the film in place and smooth down.
3: Trim to fit. DONE.

I only had a problem with step 3. Getting the vinyl cut right. See, there’s a little ring around each section of light where the different plastics meet up. You can feel it with your fingernail. Geoff reported that the X-acto blade just magically knows where to go. It follows that ring.

But… I sanded my tail lights flush a few years ago to get rid of some haze. They’re super smooth. So… no little ring to follow.

In the end, I just had to trace visually and cut carefully. It was pretty simple once I figured it out. Still, I ruined one square of the vinyl before figuring this out. Glad I had extra.

Then it was time for another small mod. 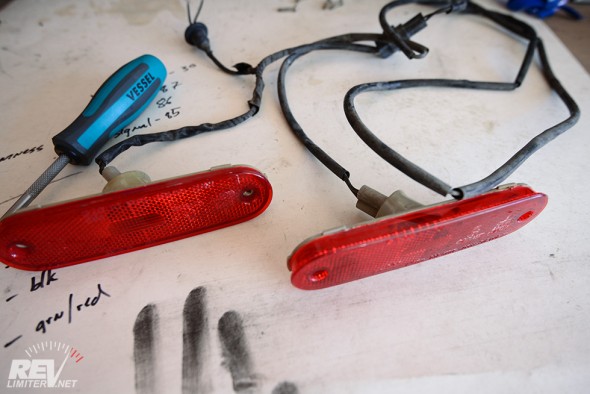 This is a mini project that I’ve been putting off for FAR too long. For… six years?

When Sharka got crushed on the freeway, I saved all the good parts. I have piles of NA Miata parts. I could almost build a new NA.

I saved the wiring harness and rear corner marker lights from the dead NA specifically for this project. Bucky needed them.

These lights have never lit up on the NB. The bean counters killed the lights back here. Only the NA had lights in the reflectors. They’re the same size housing, just no lights in the NB.

Out came the screwdriver. 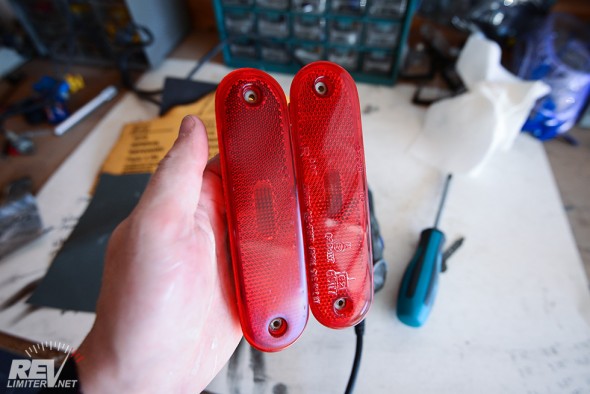 I couldn’t just install the things. I had to shave them flat and get rid of those raised characters. It’s worth the 15 minutes of work. 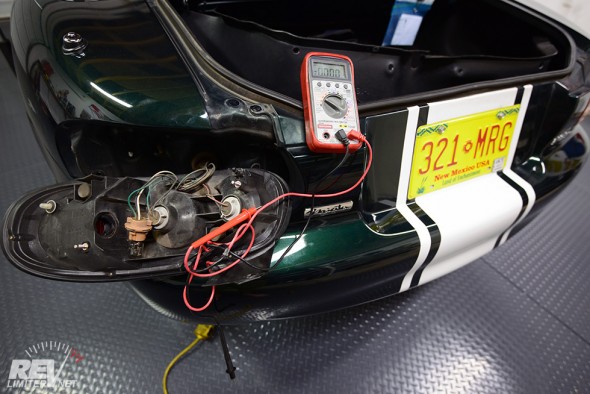 Figuring out the wiring. 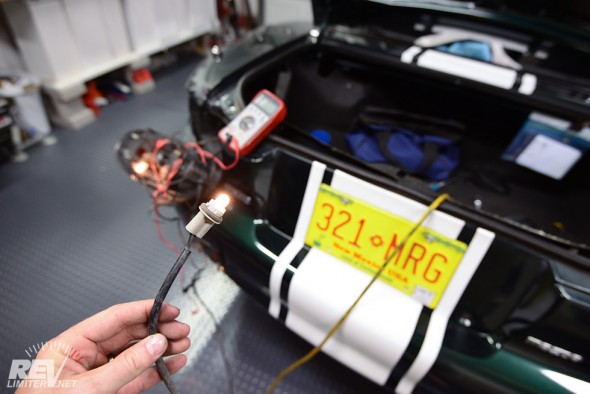 I’ve never changed a tail lamp bulb in an NB. You have to peel back the trunk carpet, remove the whole tail lamp (they don’t really come out easy) and then let it dangle to get access to the bulb. WTF? Seriously? It’s almost painfully difficult.

Anyways, once I had the light free, I began scrutinizing the wires. A little inspection with the multimeter and I discovered the white and black wires were the ones I wanted. The green is for the brake light.

I only blew one fuse figuring this out. That’s not bad! I even had a spare. 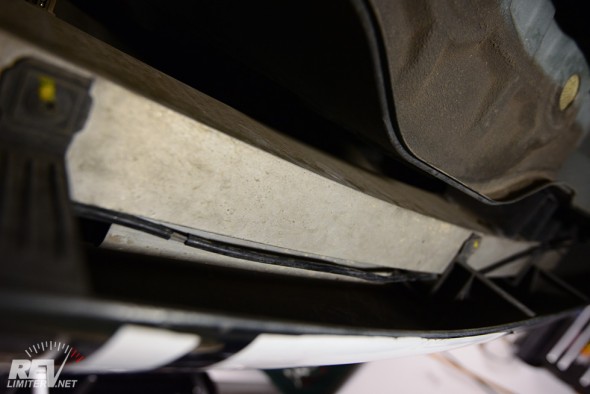 Wires routed under the bumper. 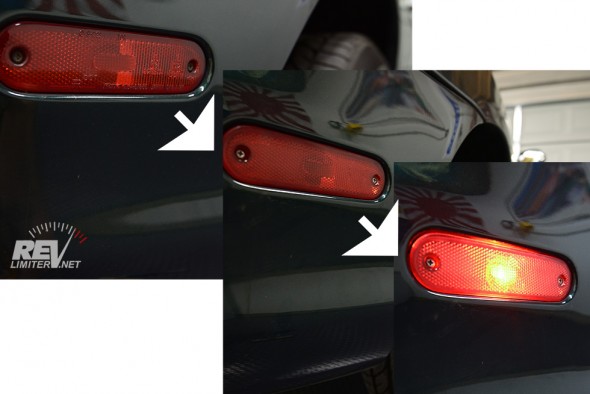 Once I had the wires connected at the light housing, it was simple to get Sharka’s old marker lamps installed and the wiring run.

The NA wiring just sorta dangled up high behind the bumper. It was held in two places as I recall. I tucked the wiring under Bucky’s bumper as tightly as I could. Since I couldn’t easily get it up as high as the NA mounting, I wanted it tight. No dangling wires for this car. 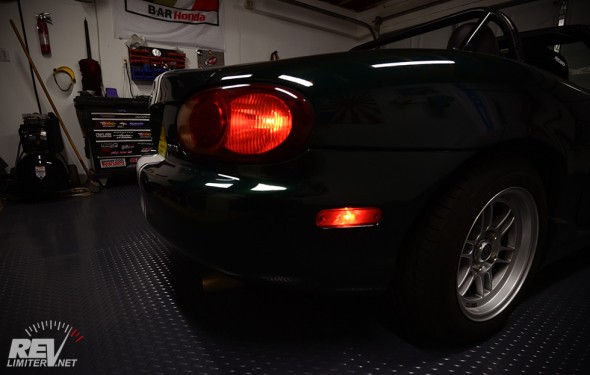 Lighting it up for the first time… man. It felt like an accomplishment. It was only an hour of work altogether for the tint and marker lights but… dang. Subtle mods. I love subtle mods. And one was something I’d been meaning to do for years.

I think Bucky is getting used to all this attention. Sharka had better hurry back. I’ll have an NC daily and Bucky’s engine on the stand before you know it.