I’m about to type one of the most obvious things I’ve ever typed.

I’ve always wanted to attend the Miatas at MRLS event.

No kidding, huh? It’s a huge gathering of Miatas at Mazda Raceway Laguna Seca. I would put money on MOST Miata/Roadster/MX-5 enthusiasts worldwide wanting to attend this. 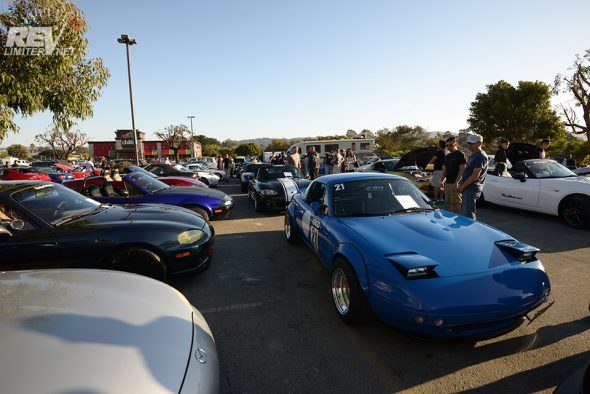 We start where I left off in the last post – at the host hotel car show.

There were so very many Miatas there. It was nuts. I would guess over 100 in attendance and actually about 40 participating in the show.

I managed to not take a single shot of Sharka or Bucky. The thought never actually occurred to me. There were so many other cars there and so many people to talk to. Why take pix of my own cars?

(because you write a blog, rev.)

Oh yeah. Because I write a blog…

Oh well. I snapped some pix of other cars. 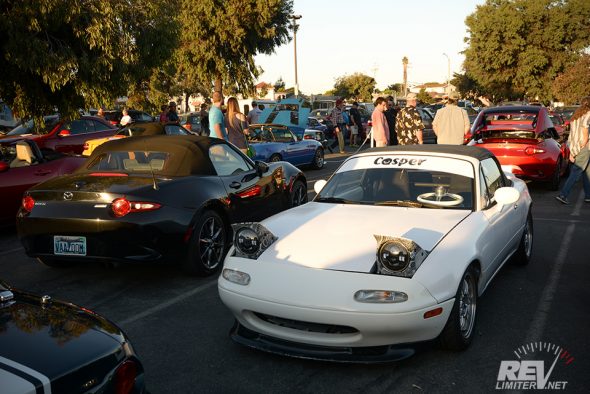 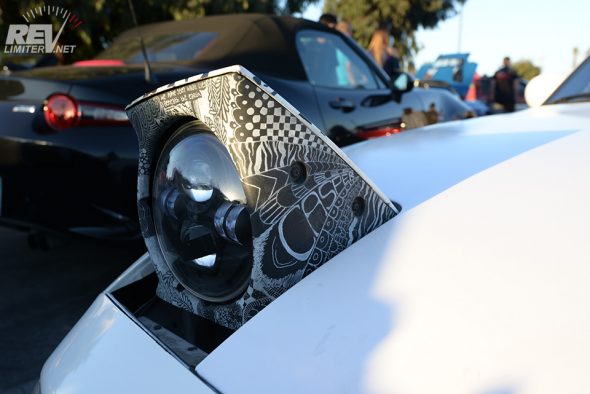 What pretty eyes you have.

Casper belongs to a lovely woman named Andi. She’s fantastic and I was fortunate to hang out with her and Dustin (owner of Brappuccino) for a good chunk of the weekend.

Andi got to ride in Sharka for a track session at MRLs. (yup! Sharka had track time, that’s the next blog.) 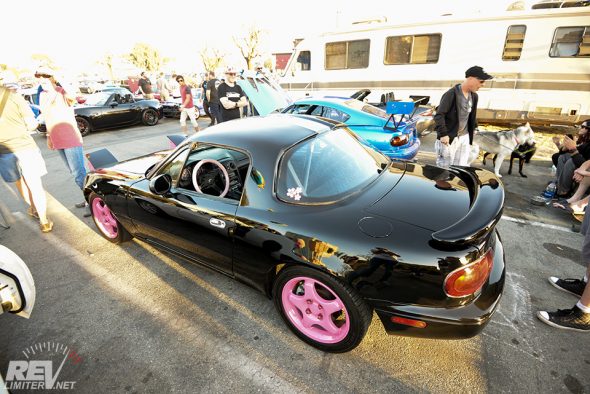 That’s a hardtop Miata. No top down drives.

This one (owned by Dustin’s mom) has a permanently bonded hard top. It’s really well done and quite pretty. And as a fellow Hardcore Hardtop Club member, I really appreciate this.

Sharka is rarely without his hardtop after all. 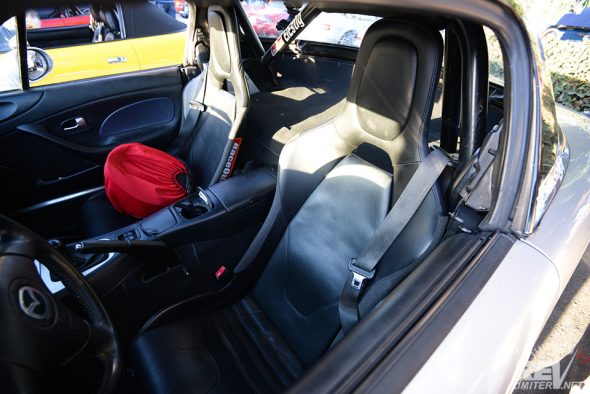 These aren’t Elise seats, but they’re also not Tesla Roadster seats. They’re a prototype done for the Tesla (I think I was told). And they’re fitted with Ryoku Rob seat brackets. They sit a bout an inch lower than my own. 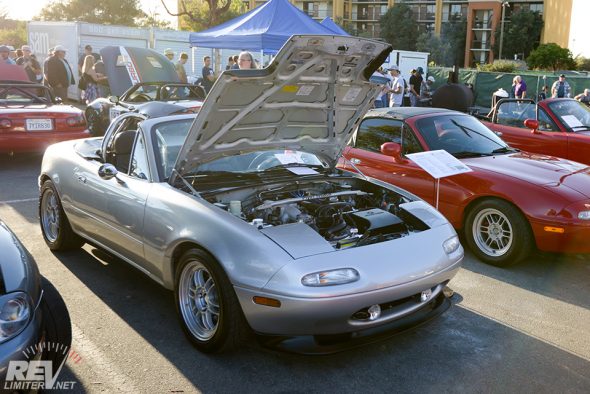 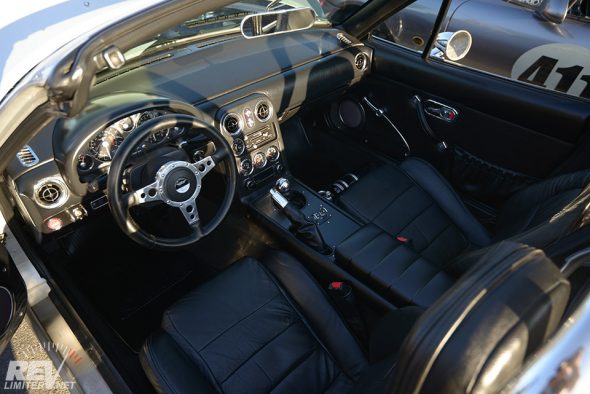 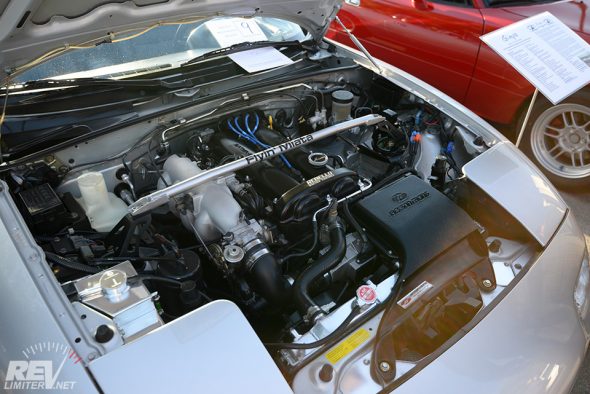 Not a spec of dust.

This is Ginya, owned by my buddy Jim. He and I have chatted over email for a few years and I’ve had the privilege of making him quite a few parts for Ginya. I never got to see the car until now.

She’s stunning. Just… flawless. And I really mean that. Not a spec of dirt or dust. Not a flaw. Not a streak mark on the paint. Just perfectly built and perfectly detailed and presented.

Ginya won the carshow modified category. Sharka lost. And that’s okay. Sharka was not at that same level that night.

Oh Sharka’s best day without a 1500 mile road trip just under his tires? Maybe he would have given Ginya a fight. But the incredible cleanliness and attention to detail that Jim has imparted upon Ginya cannot be overstated. I was (and still am) just blown away.

Fantastic to meet you Jim!!! And congrats again! 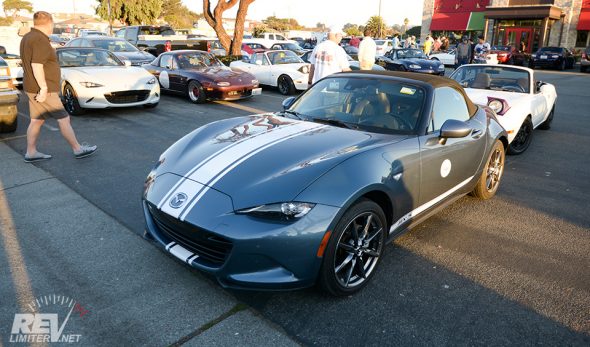 I’m not sure what it is about this ND, but I’m drawn to it. It seems familiar somehow.

More on this one in a bit. 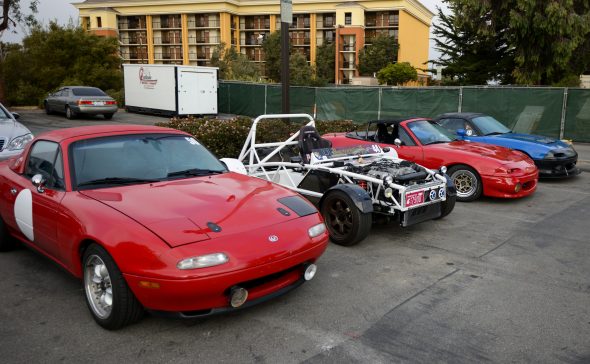 A small fleet drove from Portland for the event. One wore a helmet the whole way.

Maybe I’m getting old, but man… I like my air conditioning. Driving an Exocet for that long a distance doesn’t sound like that much fun to me. But perhaps it’s something that needs to be tried in one’s life… 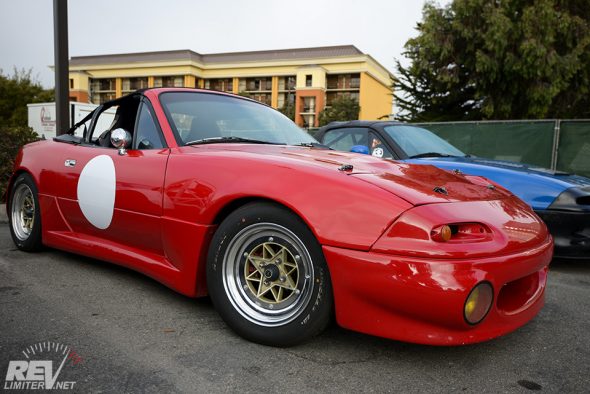 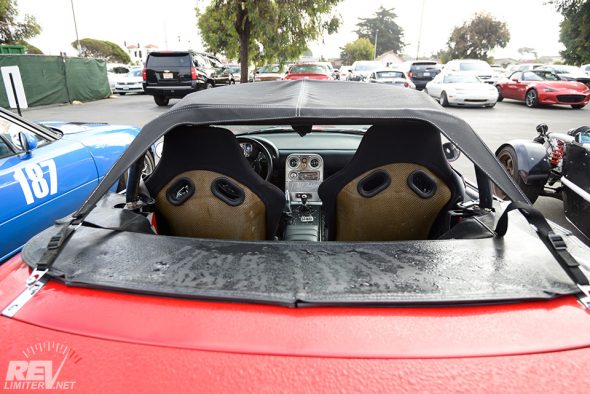 Among the Portland cars was Bo of Bo’s Garage. He’s been an online buddy for years and it was wonderful to finally connect. Among other things, Bo found Sharka’s Watanabe Falcon steering wheel.

My photos don’t do the car justice. There’s innumerable JDM treasures and rarities throughout. But Bo was not around when I was shooting these, and I didn’t want to dig around in his car without him there.

Star Sharks, GV tail lights, GV hood, Garage Hundred One nose, Mazdaspeed seats… the list goes on. And all the parts work so nicely together!!

So many Star Sharks. I was sad on more than one occasion to only have Sharka on RPF1s for the trip.

But anyways, that’s enough of the car show before the event. Onto the Miatas at MRLS gathering itself! 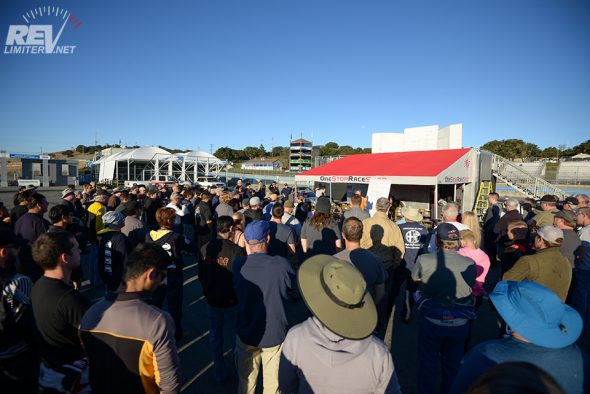 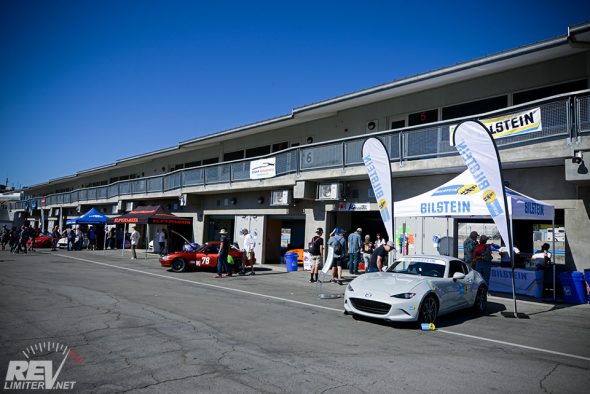 I snapped far too few pix around the pits, garages, and parking lot. I was mostly talking to people instead of hiding behind a camera. 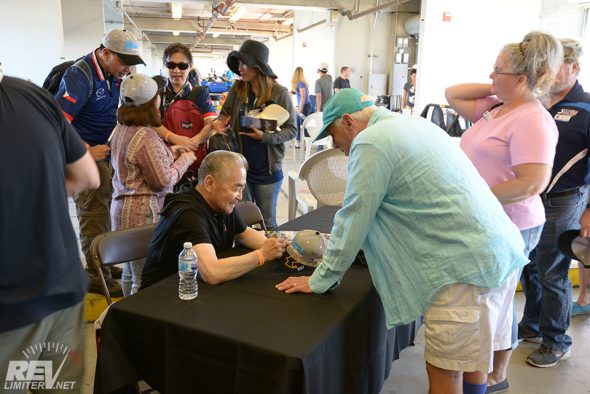 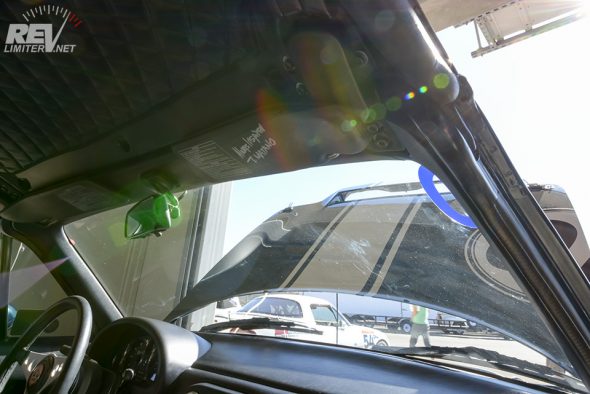 Tom Matano, Miata designer and amazing human being, was in attendance to sign autographs and shake hands. And… unfortunately this was during one of Sharka’s track sessions. So I did not get to shake his hand at that time.

Corey, another amazing human being, stood in line and got a few things signed. He got a hat signed for himself, a diecast signed for Pete, and one of Sharka’s sun visors signed for me.

No words. Getting to have Tom’s signature in Sharka… just no words. Such smiles. Thanks again Corey.

At the banquet that night, I got to meet Tom and shake his hand. I’m ashamed to say that I bothered him while he was eating. But I couldn’t just not say hi and thank you to him. So I accosted him quickly and then left him in peace.

Later that night after dinner, I and four hundred other Miata owners sang Happy Birthday to Tom. He was celebrating his birthday by hanging out with Miata folks.

Such an amazing event, you guys!!

Anyone and everyone reading this should attend one in the future. That’s all there is to it. 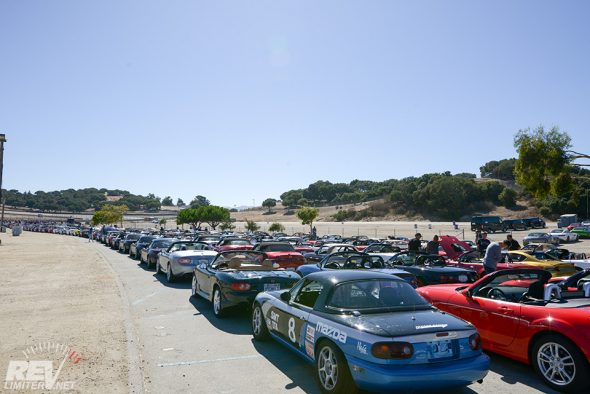 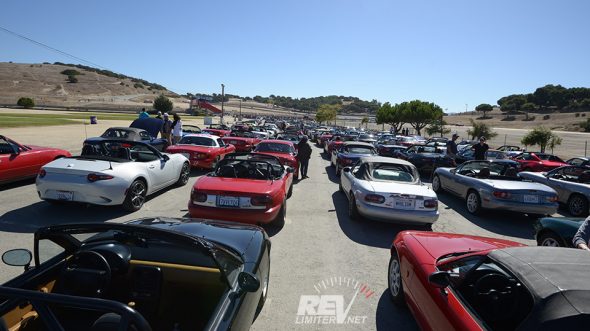 Back to the track.

They tried to do something special for the parade laps at Saturdya’s lunch and get a solid track worth of Miatas going on. 354 cars packed the track for a Mobius Strip of Miatas. There were GoPro cameras here and there on the track to capture the cars rolling past. This was preparation for something they’d do at next year’s (2018) event.

Sharka and Bucky were in the pack flying together. 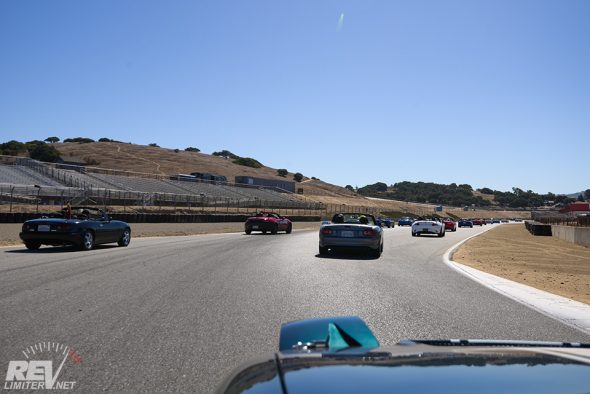 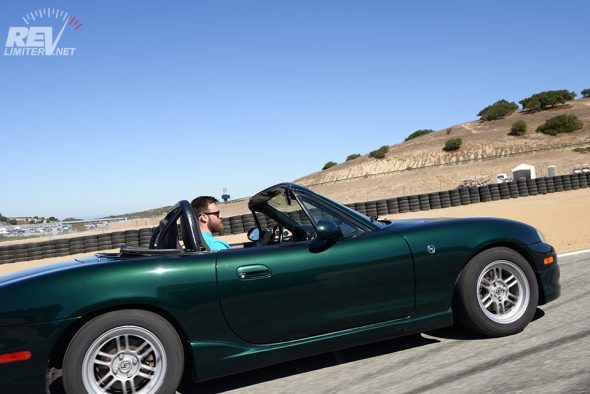 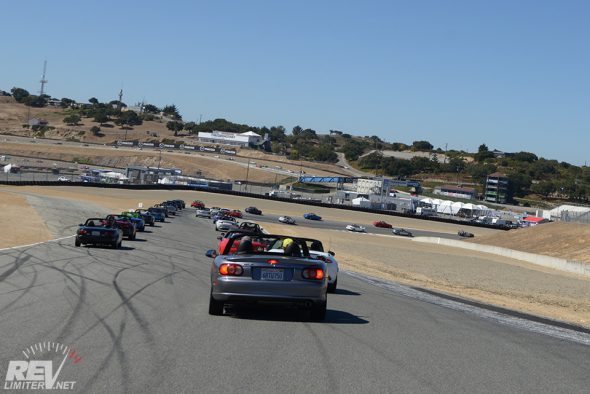 The laps were very slow due to all the cars. But it was something I’ve never experienced. SO many Miatas all in one place. It was incredible. 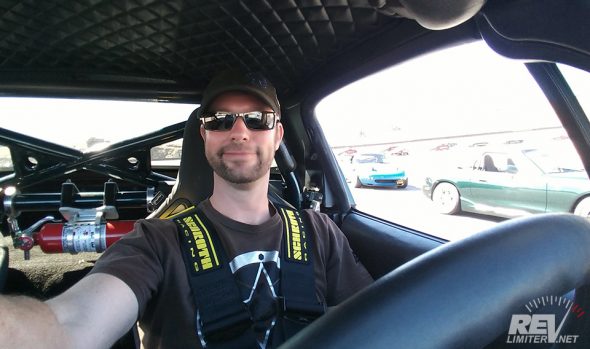 I took advantage of the profoundly slow speeds to snap many photos. 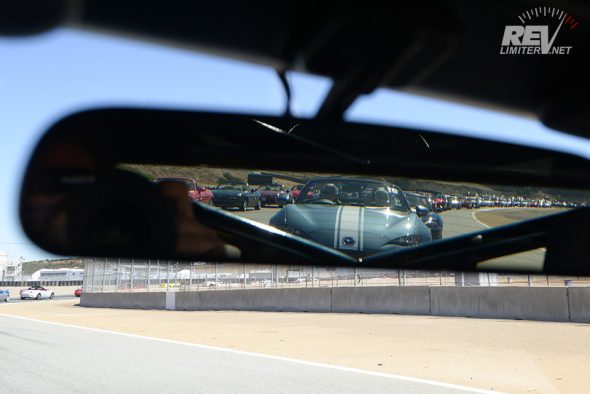 Sharka’s ND buddy was right behind! 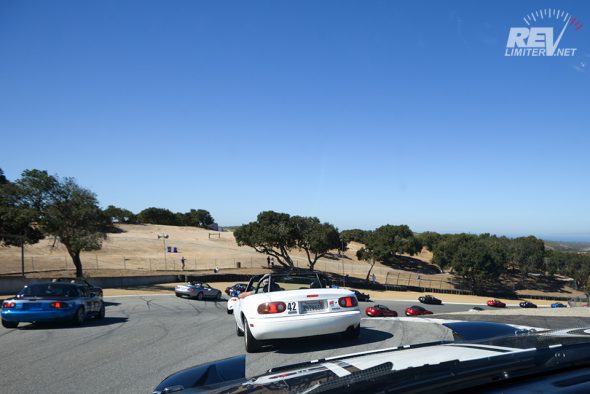 Down the corkscrew with a camera in my hands.

Bucket List Item – Photos of Sharka on the Corkscrew. 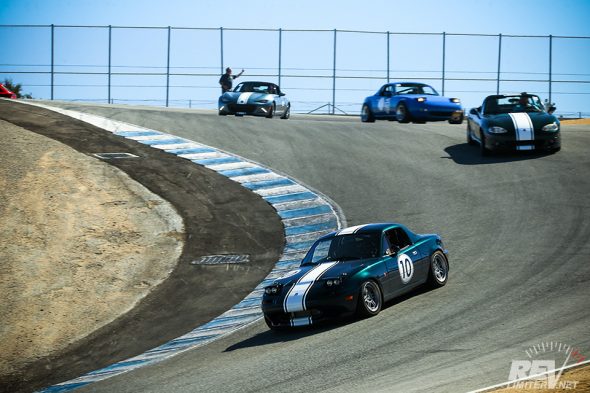 Sharka and Bucky on the corkscrew.

THIS. This right here. This is more than I ever dreamed.

I always wanted a photo of Sharka on the corkscrew. It has been right up there on the list along with actually driving the corkscrew. The experience alone was something I’ve always dreamed of, but to have a pic of it also? WAY up there.

I never even dared to dream of having Bucky and Sharka in the same corkscrew photo. And to share the pic with my dear friend Peter and Benny? OMG.

The striped ND is even in the shot.

This will be printed and framed in large format.

Thanks for the photo GotBlueMilk!!! 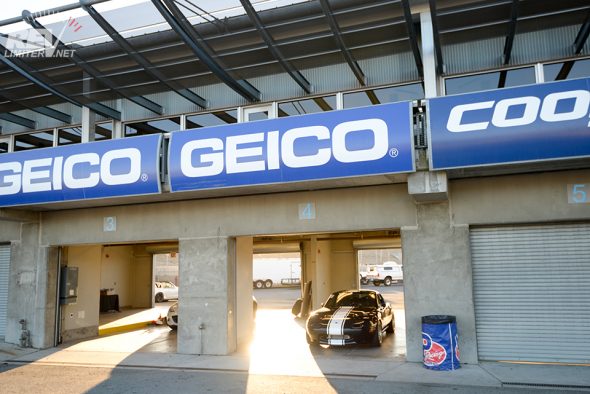 As I hinted earlier, Sharka got track time. That’s in the next blog post.