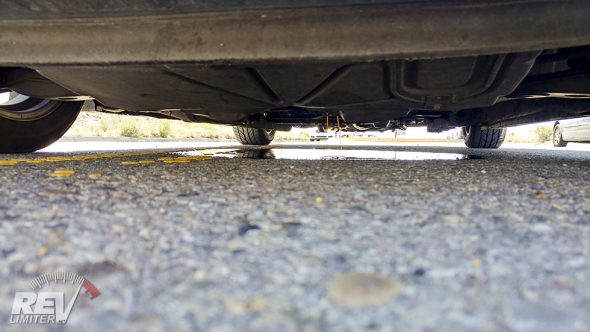 It was bound to happen sooner or later.

I made it almost 17 years without breaking a Miata oil pan. 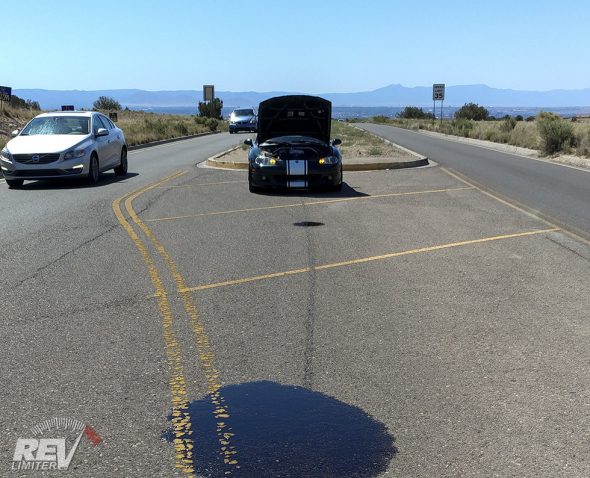 I guess technically, I *still* haven’t broken an oil pan. My wife was driving at the time.

See, we were driving home from the gym. She took our daughter to school and I met her there. I was driving Stormy, she was driving Bucky. We worked out and then left.

It was a nice morning cruise home. No traffic in front of me. I made a light she didn’t and she ended up about 3 huge trucks behind me.

There’s been some construction and there’s many huge trucks moving earth between our house and the gym. I’m guessing that’s where the huge rock came from. It was probably 7-10″ in diameter. Really sizable. Not enormous, but pretty big for a Miata. It was just laying in the middle of the lane.

No one in front of me meant I had plenty of time to see the rock and dodge.

One of the trucks between me and Sarah kicked it up. It rolled. She couldn’t dodge. 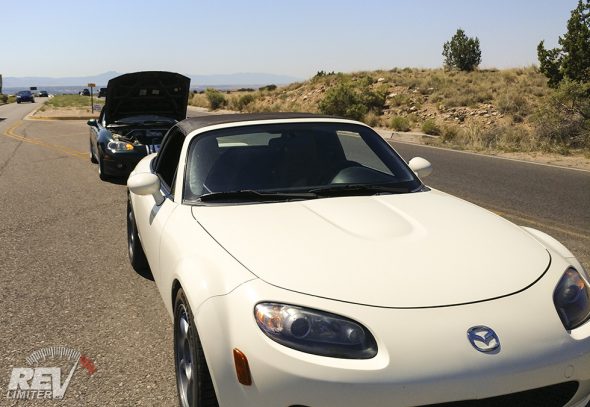 She pulled over when the road allowed. Fortunately, it was just a small crack in the oil pan and the dipstick still had something on it after she shut off Bucky’s engine. I’ve read horror stories on the forums about engines bleeding out in 20-30 feet. But Bucky’s tough.

At least I hope Bucky’s tough. I’ll find out soon enough. But there was PLENTY of oil left to dump out all over the road after she parked.

We pushed Bucky back to give room for a tow vehicle. 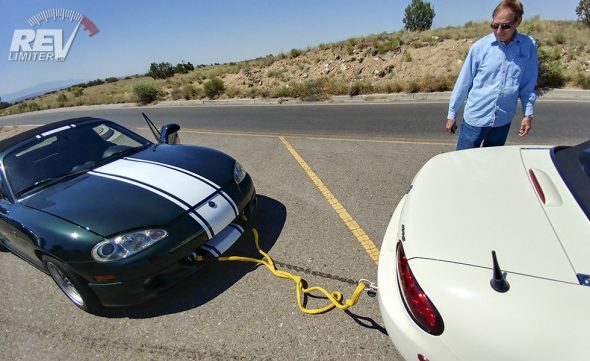 I called my dad who lives very close by and asked him to bring his SUV and a tow cable. A few minutes later, there he was… but his turbo Hyundai had no way to tow. Apparently the little tow eyelet that all modern cars have was not present on his. It’s actually an OPTION from the dealer, not a standard piece.

You can see what happened next.

This is, for the record, the largest thing I’ve transported with a Miata. I thought hauling 4 wheels and 4 tires (both separate) was a good trick… but that was nothing compared to hauling a whole Miata with a Miata. 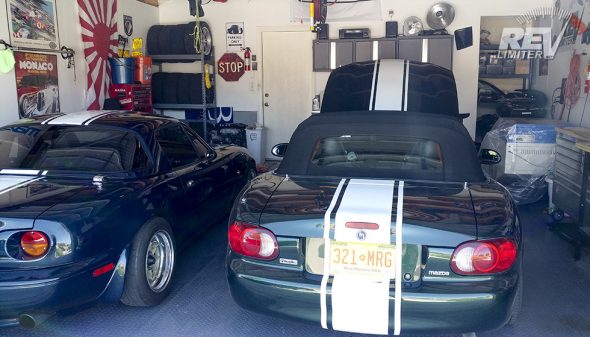 And why did I do this and not just get Bucky home with a tow truck? Something was going on in the city and there was a 2 hour wait for a tow when we called them. AAA was an even longer wait. And we were under 2 miles from home.

It was an unforgettable two miles. I’ve never tried to tow ANYTHING behind a Miata. Bucky was a first. I drove Stormy and my dad drove Bucky. Take offs from lights were fun. Braking for lights with two cars worth of weight and no vacuum assist was apparently fun as well. But we did it. 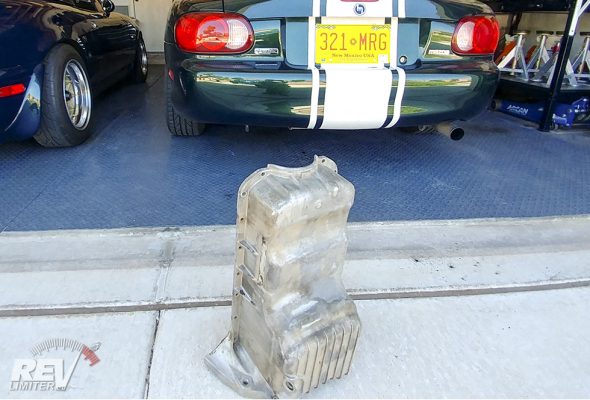 Did you know that NB2 oil pans are different? I didn’t either until Bucky lost his. I’ve had a spare oil pan in my parts shed for just such an occasion, but a buddy mentioned that there’s some differences and I’d need an NB2 (thanks Eric). A new pan from MazdaComp is now in my possession.

Bucky’s needed a new clutch for a while too. The pilot bearing in his has been growing noisier and noisier over the past year. It’ll seize eventually and strand me. I didn’t want to take the time to change it, but now I have no excuse.

The engine will come out. New pan will be installed. New clutch, seals, and pilot bearing will go in. Life will be good. 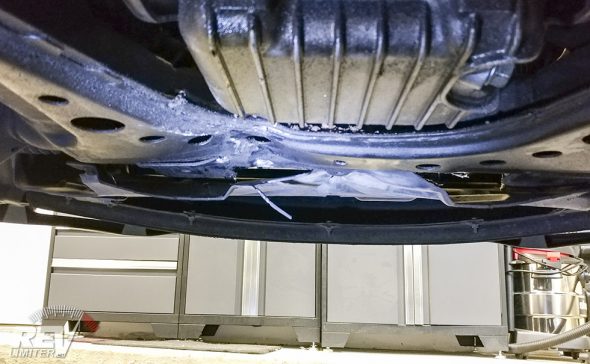 Notice the big dent in the subframe? It used to hang about an inch below the oil pan. Now it’s about an inch above. And the corner of the pan has a lovely crack.

Don’t worry, Sharka. Your brother will be okay.

6 Responses to “Roadster Down”