Stormtrooper Gets Some Low 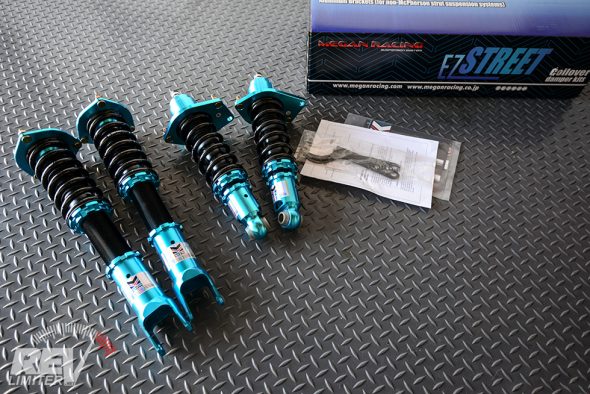 The stock suspension on the Stormtrooper had to go. It was, in a word, horrible. It sucked up big bumps… okay? But little bumps ended the world every time. And it wallowed. And it leaned.

And it was so very high. Oh my god, you guys. SO high. 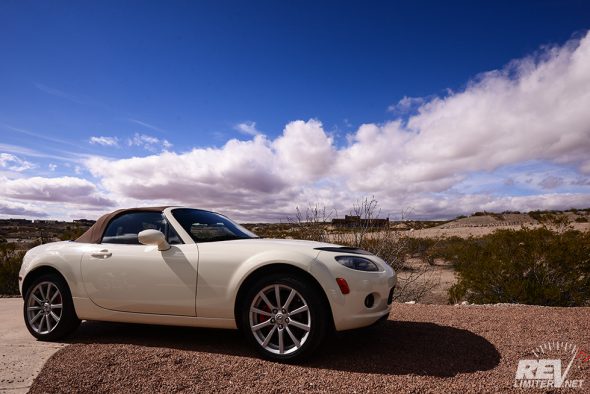 Aesthetics aside, the stock suspension had to go. The black shocks were blown and not really controlling the soft (and very long) spring anymore.

My buddy Ly works at Pann Auto, the oldest speed shop in San Diego. He got me a crazy awesome price on this Megan suspension. Just… awesome. If you’re in San Diego, go by Pann Auto. Ask for Ly. Tell them revlimiter sent you. 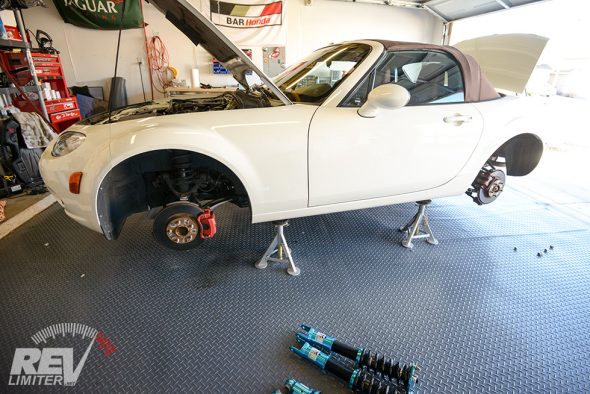 Did I mention my jack stands? Love these stands.

Did I mention I was having some stress about the suspension install? I’d never torn into an NC before. I’ve done a bunch of NA/NB suspension installs in my life… probably more than 20. But NC? A foreign beast.

I really hoped that it did not resist all modification like my Mazda 3 seems to. That car is just not easy to work on. How would a MX-5 of the same vintage be? 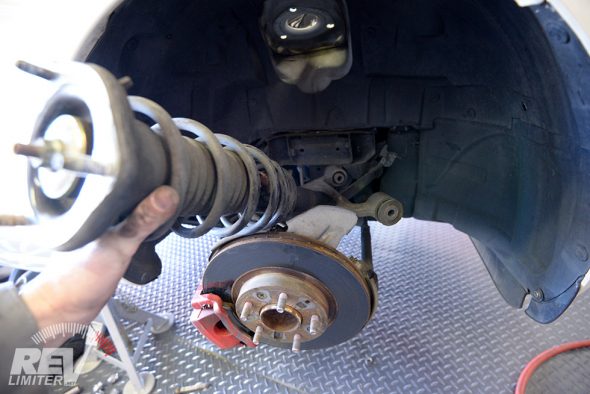 In a word: Miata-like. The NC suspension comes apart in a very similar way to the NA/NB. The rear is kind of a pain, but there’s not any showstoppers along the way. It was an easy couple of hours. I shot a bunch of pix for a future blog post about changing the NC suspension and probably spent an extra hour clicking the camera. 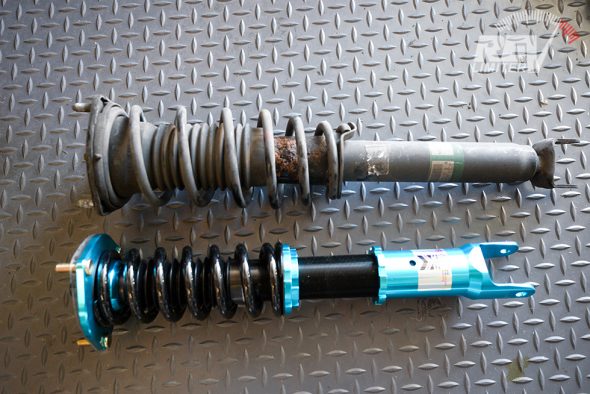 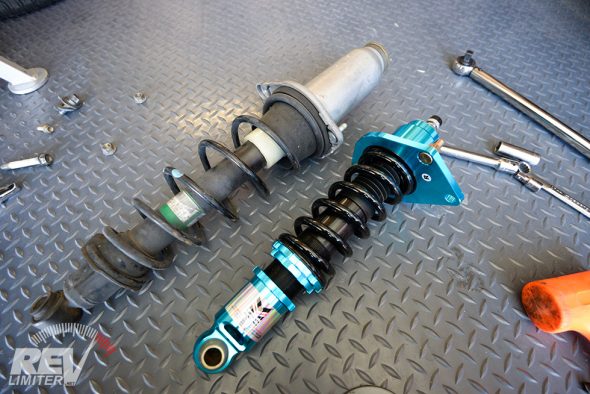 The Megan shocks have tons of room to get low. I’m nowhere near the lowest point. They’re also body-adjustable, so you can set your shock preload and just turn the bodies to lower or raise the shocks.

They come pre-assembled, but anyone playing along should CHECK EVERYTHING to make sure it’s tight and right. I did this after installing all the shocks and lost maybe 10 minutes re-tightening spring collars on the car. 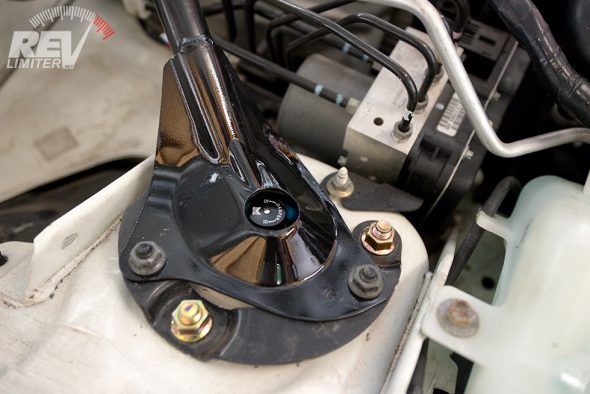 One modification needed – drilling a hole in the shock tower brace to allow the shock to be adjusted. I might have not drilled a large enough hole… my step drill maxed out at this point though and I can indeed still turn the adjusters. 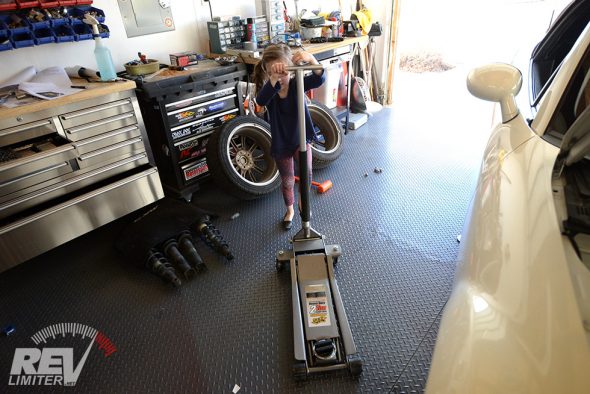 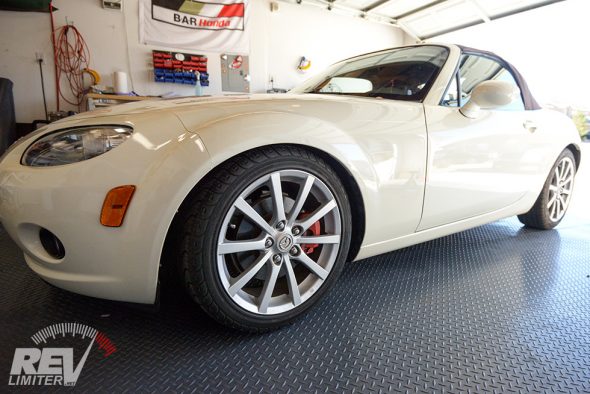 On the ground for the first time.

Ly gave me the advise of lowering the front shocks a full inch and raising the backs a quarter inch. This was invaluable and saved me several trial and error raise/lower/drive-around-the-block sessions. It got me in the neighborhood.

I still raised and lowered the car quite a few times trying to get the height right. And I’ve gotta do it a few more once the suspension settles. But for now I have non-blown shocks on the car and a more Miata-like ride height. 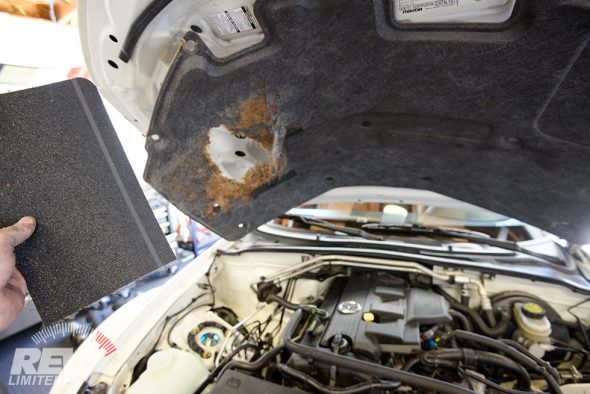 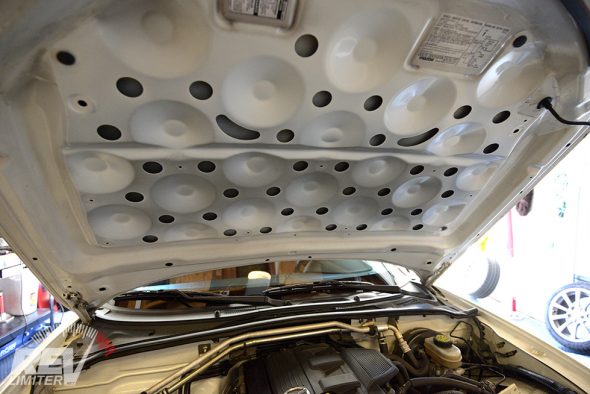 Before I buttoned things up, I noticed a section of the hood liner kinda sagging. Hanging down. And differently colored.

It was skateboard grip tape. WTF?!? I peeled it off and snapped the above photo.

Apparently a woodland creature got up in there and started stealing nest material. And then a previous owner slapped a creative solution over the hole.

I tore off the whole liner. I *might* get a replacement for it. But no 90-05 Miata ever came with this. The NC engine runs pretty cool. I’m of the opinion that it’s not needed and was one of those luxury touches Mazda added in 2006. We’ll see.

Back to the suspension. 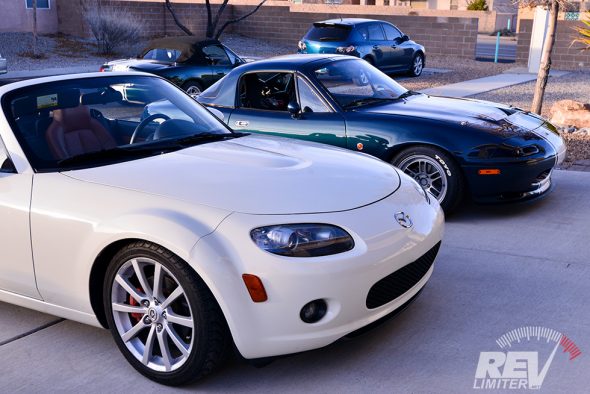 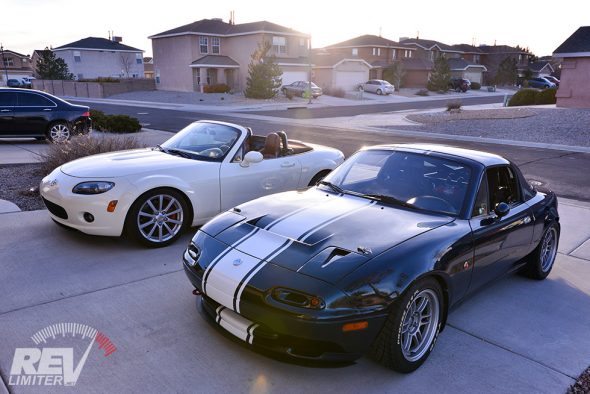 Sharka had to sit outside watching the whole time. There was whimpering and cursing. I promised I’d get him in one of the shots. He cursed louder at this one. 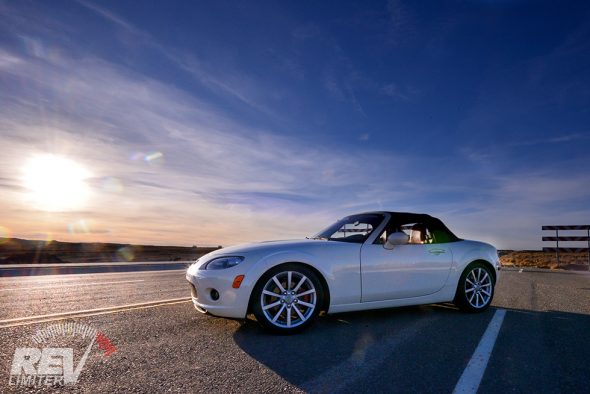 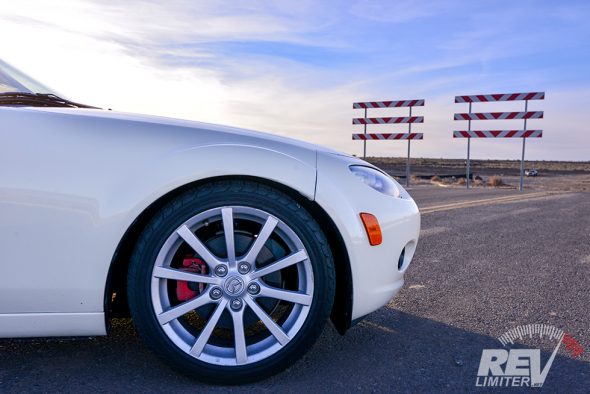 Not bad. Full shock travel at this height!

This is SO much better. Oh my god you guys. It looks like a Miata now! The factory 4×4 ride height on the NC looks so… odd. To my eyes, it makes it look like a different car. But add a little bit of low and maybe some red tail lights? It transforms into a Miata in my brain.

That’s all I wanted. I just wanted to get the car looking like a Miata. 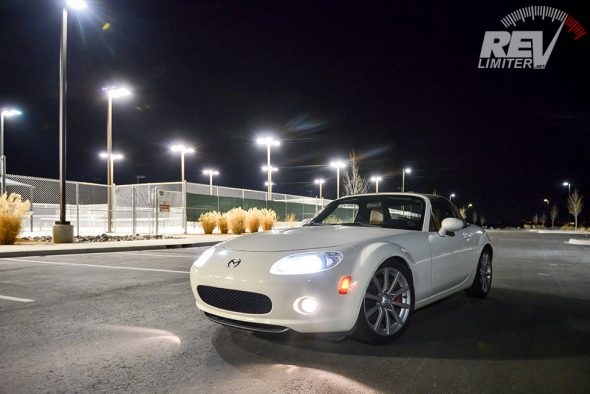 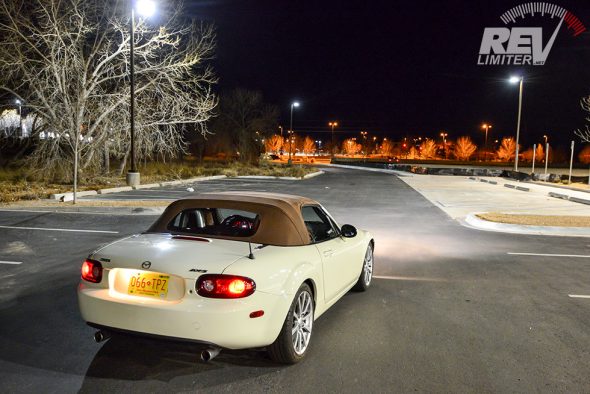 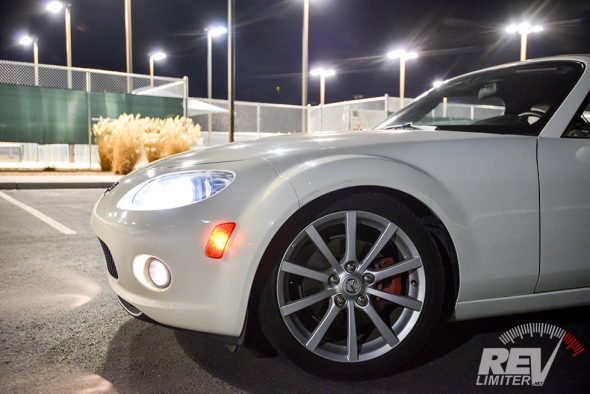 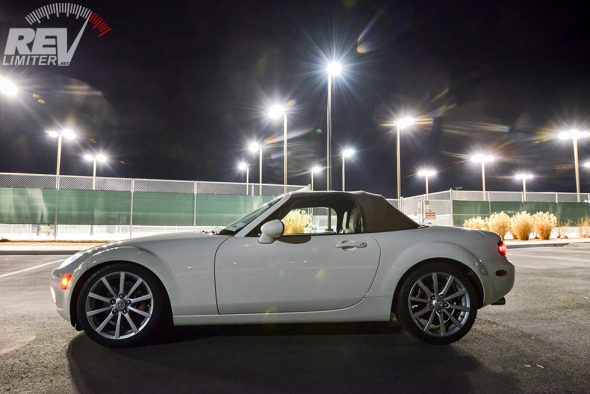 So how does it actually drive with the Megans? I’d love to tell you and I’d love to know myself.

Between taking these pix and writing this post, I’ve covered maybe 20 miles. The suspension is still settling. I need another 80ish before I can tweak the height again, get it aligned, and speak with any authority.

It’s much more firm than the stock ride. But that was also with blown shocks. It was really really soft on the blown shocks, and yet also bouncy.

The Megans ride okay, but small bumps seem to unsettle them. Like it’s blowing through the shock travel and nudging the bump stops on small, high speed bumps.

I’m gonna add a bit of pre-load to the springs and see how that changes things. I’ve never run a shock with zero pre-load and contrary to miata.net NC suspension section wisdom, I don’t think it’s a very good idea. A bit of preload (not crazy amounts, but some) helps maintain shock stroke while the car is just sitting and helps keep it off the bump stops.

But seriously. It’s SO MUCH BETTER! Stormy is on the road to recovery. Thanks again for the hook up, Ly!

4 Responses to “Stormtrooper Gets Some Low”