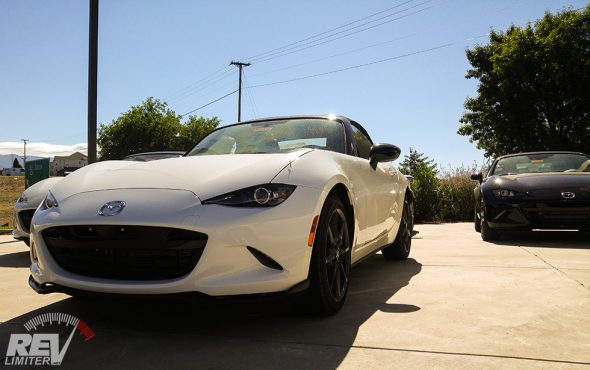 This is something I’ve been putting off for a while. I didn’t want to drive an ND. See, I know myself. I’ve been me for a while now and am pretty good at it. I knew I would want one after driving it.

I was right. I want one. The ND is fantastic.

But let’s back up a bit. 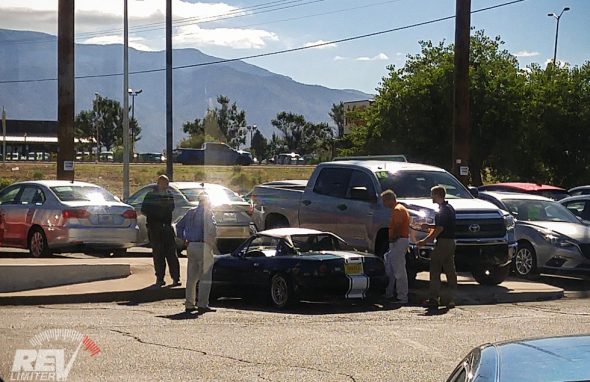 It was a boring weekday morning without much to do. I found myself in the position to be driving an ND for an extremely cool and unexpected reason the following week (more on that later), so I wanted to try one out locally first. Get a feel for the car before others saw me drive it, you know?

So Sharka and I drove over to University Mazda here in Albuquerque and parked. I went inside while Sharka preened in the lot. A few minutes passed and I happened to look out the window. The photo above tells the story. The salesmen were loving by my ancient Miata.

I went out, popped the hood, and chatted a bit. The guys were super nice, but they weren’t just being nice, you know? They really were impressed by my ridiculous blue car. And it felt GOOD. Nothing like positive feedback.

But there were NDs to drive. The hood closed and I got in something a couple decades newer. 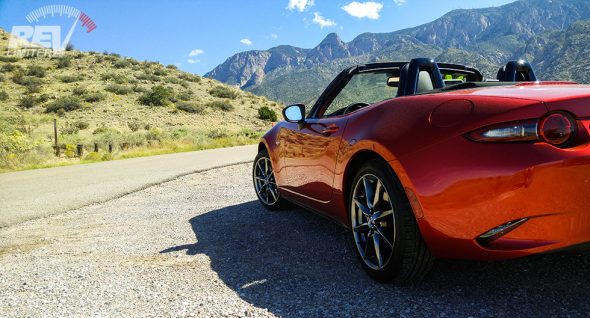 I wasn’t particular about which ND to drive, I just wanted to try one. Any one. Manual transmission was a plus, but a car that wasn’t buried five cars deep was a bigger plus. This little Soul Red “pre-certified” car was my tester for the morning. It was accessible and had a key. It won.

I didn’t manage to get the car’s details. No idea what package or trim level it was. It had the leather seats and red-painted door sills inside. 6 speed automatic with the paddle shifters. They look to be upgraded wheels, so I’m guessing there was also an upgraded suspension or differential or something, but that’s just a guess.

Really, I didn’t plan to have an awesome drive that would get a blog post. I shot all the pix with my phone. I didn’t bring a Go-Pro. I just wanted to see how the ND drove. 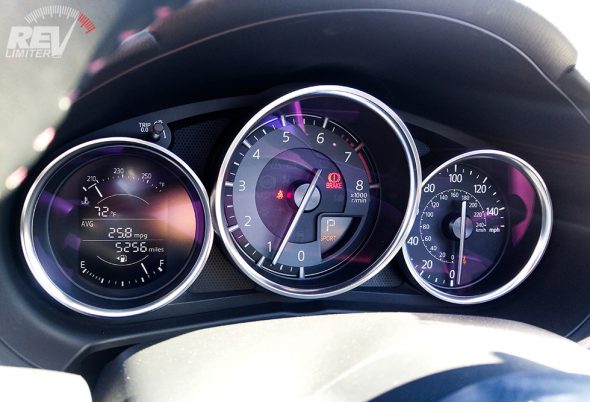 Those would have to go.

The gauges were okay. A bit dim actually. I was surprised that they weren’t brighter. But the central mounted tach? Loved it.

If and when I get an ND, those plain faces will be the first thing to go. It needs a little more style behind that steering wheel. 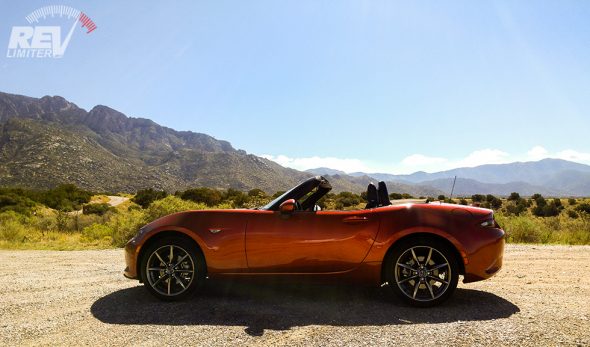 My test drive ranged all over. I did some freeway cruising, some stoplight sitting and a bit of on-ramp hard accelleration. It doesn’t sound too exciting, but it was all in the name of getting to a nice twisty section of road that I didn’t know existed so near to town.

The ND feels solid. Very very solid and well built. Know that new-car fresh feeling? It had that in spades. Everything was tight and fresh.

The paddle shifters were really quite nice. I didn’t expect to like them much, but they really grew on me. I doubt I’d purchase a car with the auto, but… man. 6 speeds, nice rev-matched downshifts (computerized of course), a nice feel to the paddles, and the possibility of just letting the car shift for itself when stuck in traffic? Not bad.

The suspension though. For a stock suspension? I’m really impressed. It felt nice and firm. Body roll was not much of an issue at all. The car handled well and didn’t feel like a floppy noodle. It took the twisties with composure and didn’t even mind being a bit sideways once or twice. 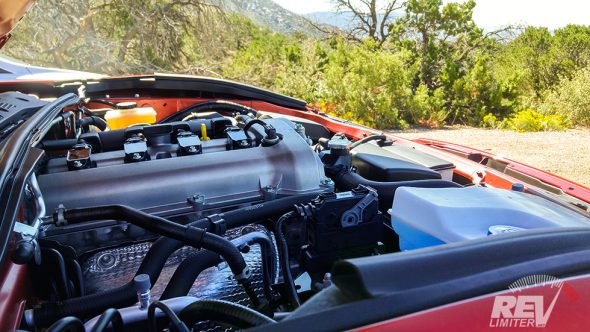 The engine. Well… it’s an engine.

Getting out of Sharka and into a stock Miata is NOT a fair test. Not one bit. The power to weight ratio of a turbo Miata is just not something a stock car can begin to go up against.

But the ND did okay. It revved nicely and had power all the way up to the too-soon redline. (I believe it was shifting around 6250, right on that first red tick mark.) It felt very comparable to the power in Bucky, my 2001 NB.

Arguably, the engine was the most disappointing thing about the car. I need to drive a manual and see how that changes things. 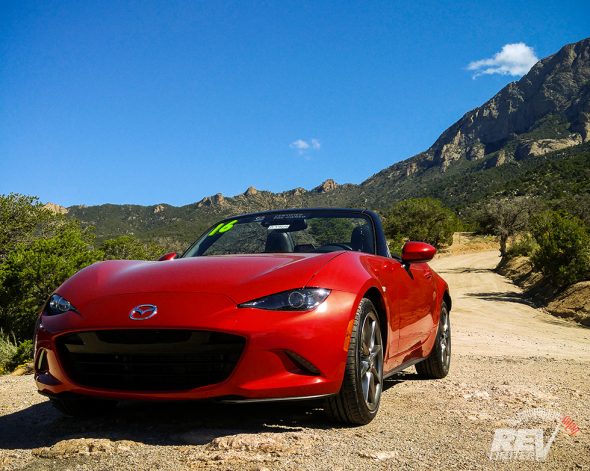 Such a face. I love this face.

That’s right. I wrote “I love this face” on the above photo. I’m smitten.

My ND tester was red, as you can see. Soul red. I’m not at all a red car fan. No offense to red car lovers out there… I’m just not one. I prefer something in the blue spectrum. I really like shades of white as well. And stripes? Yes. But I’m not really much of a red lover.

And yet I still love that face, red and all. 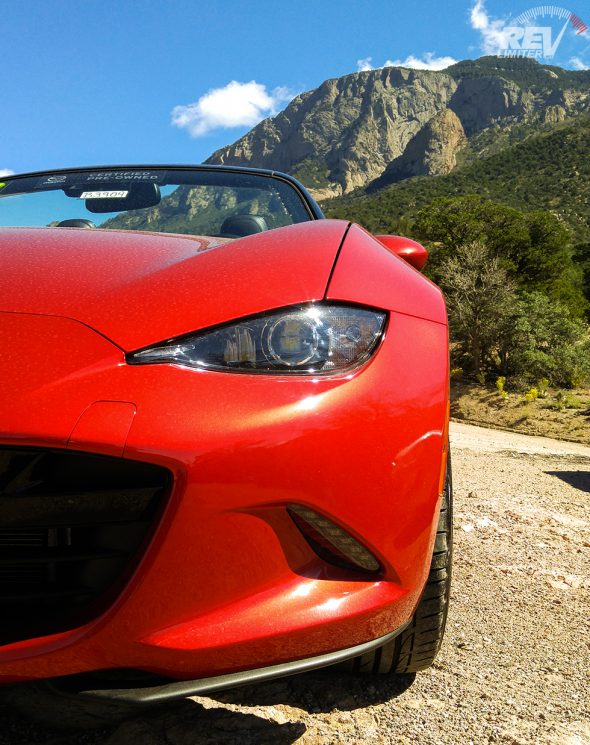 So… that’s it for me. I’m gonna need an ND in the stable. It won’t be immediate (most likely) as I don’t have a place to park it. I couldn’t let go of Sharka or Bucky either. But I need an ND.

It calls to me. It’s waiting for me.

Mazda did an outstanding job with the car. Everything I’ve read in the various reviews over the last year is dead on. It’s a masterpiece.

Though many reviews were comparing it to the NA. I don’t think that’s quite right. To me, it feels like an evolved NB. It feels like the designers chipped off a bit here and tweaked a bit there. Like the NC never even existed (sorry NC fans) and they jumped straight from the NB to the ND.

The ND is amazing.

Thanks for entertaining me and letting me zip around in the car, Kevin. When the time comes, I’ll definitely be headed to University for another revlimiter Roadster.

7 Responses to “revlimiter Drives an ND”