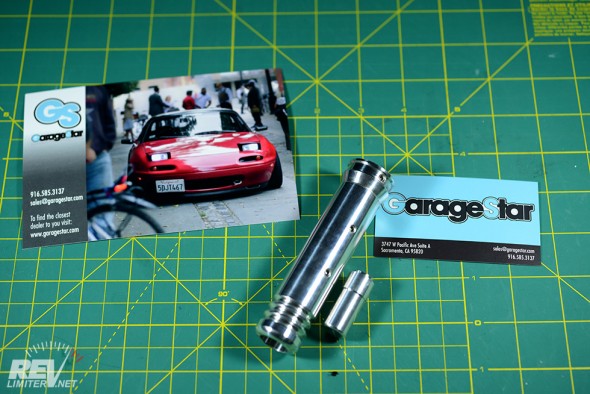 Time for Bucky to get some attention! The little guy is such a trusty steed. It was far past time to show him some luv and shiny new parts.

Bucky’s handbrake is something I’ve wanted to change for a while, but never ran across the right one. Sharka has a Voodoo brake grip, which I love, but I didn’t want to just put the same one on Bucky. I shopped. I waited.

And then Garage Star came out with their E-Brake Lever Grip. 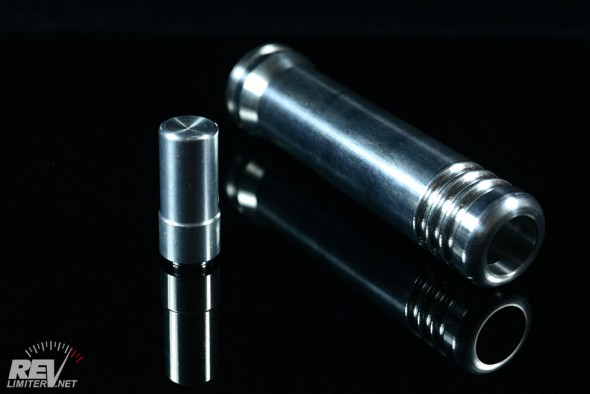 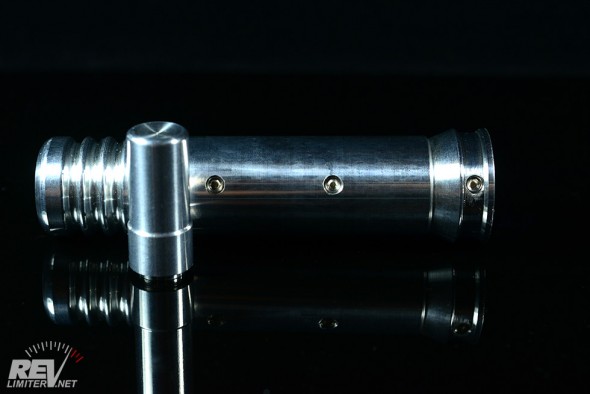 A thing of beauty.

It’s just so… perfect. The handle is rather lightsaber inspired. And it is one of very few handbrake knobs that comes with a button. Usually you have to buy a button separately.

The brake grip fastens with three set screws. You need an imperial set of hex keys to tighten down the screws.

Of course… you also have to remove your OEM brake grip. 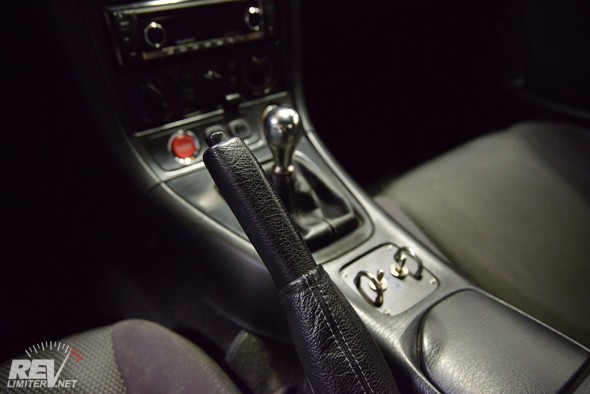 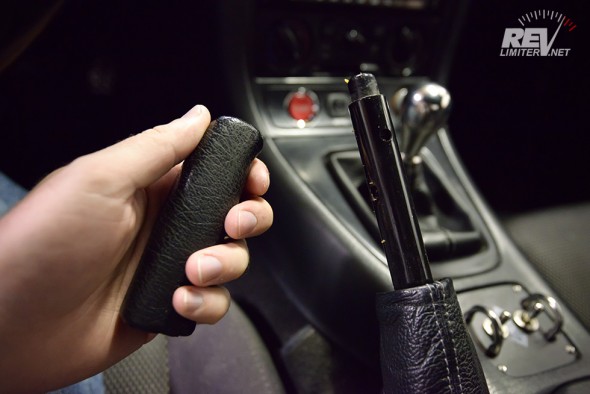 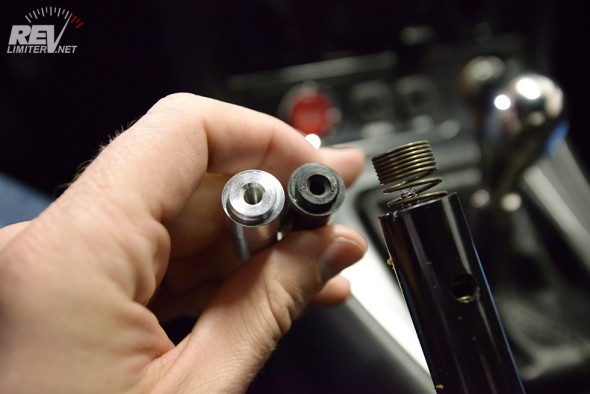 It’s honestly quite easy to remove the handbrake on an NB. You just use a lot of force and twist it off. Twist back and forth in tiny motions while forcing the handle toward the radio. It took me less than a minute to get Bucky’s OEM grip off.

If you’ve got a wood handle it’s gonna be a bit more difficult. I’ve removed 3 of those in the past year. None crumbled or splintered, but each was much more stressful than the stock rubber piece. Just use a lot of force and wiggle the grip off. 5 minutes of work will have the brake and knob separated from each other.

The button is another thing. It screws on. So you just unscrew it (in the regular lefty-loosy direction) and replace it with the Garage Star button.

To me, it was much more difficult to unscrew the button. I had to use some vise grips and a cloth to keep from biting into the plastic too much. But I got it all off after another 5 minutes of work. 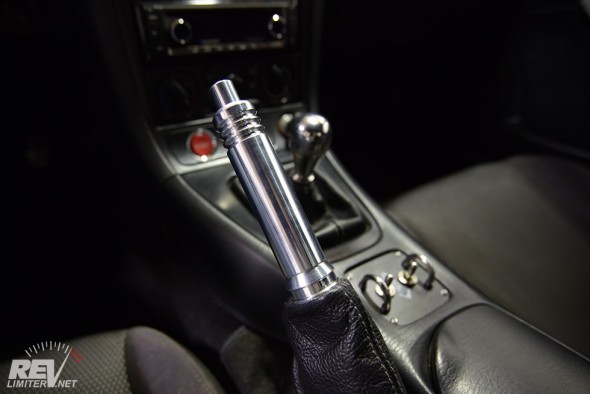 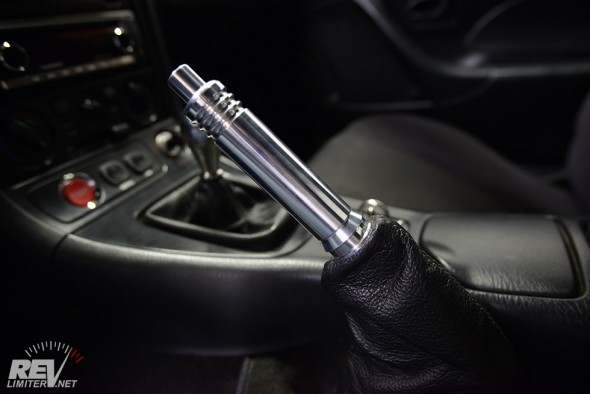 The handbrake body has a slot at 6:00. If you align the handle to have the set screws also at 6:00, the screws will just fall into the handbrake to be lost forever.

Rotate the brake grip to 5:00 or so (slightly toward the passenger) and then tighten down the set screws. 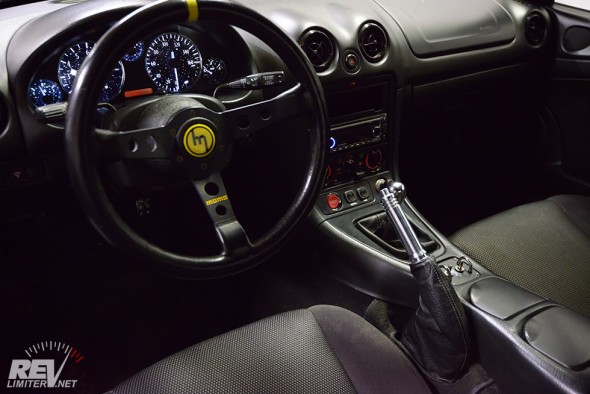 The Garage Star grip is fantastic. It looks great and it FEELS very nice. It feels sort of special in my hand. I’m used to holding the OEM shaped grip. Having a round one with ridges and a nicely machined button feels… excellent.

I highly recommend it to anyone. It’s well worth the asking price and when you add in the fact that you get a button with the grip, it’s a steal.

Bucky will be proudly wearing this for a long time to come. Thanks Ken and Jon!!!!

Once again, you can get the Garage Star Brake Lever Grip here. 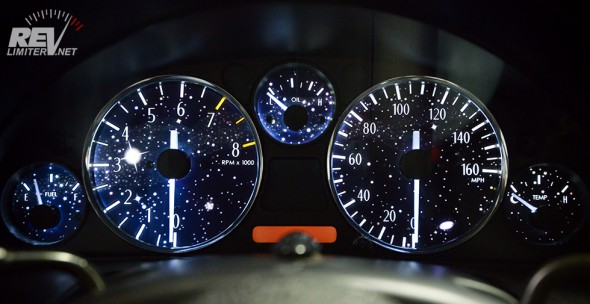 I had to snap a pic of Bucky’s Cosmos gauges as well. Since the days have been short and I get to drive at night more, I’ve really been appreciating them. They’re almost magical at night. I’ve had no desire to change them out for something else. That’s a new feeling for me.