All the Custom Gauges 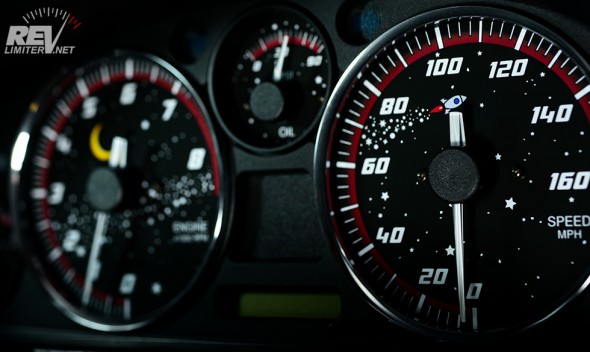 For about the last year, I’ve been reading comic books. A lot of comic books. I’ve read several thousand in the past 14 months. It’s what I do in the evenings instead of TV. Comics, comics, comics.

I’ve read every Transformer comic several times. The whole run of Transmetropolitan was devoured over Christmas. Captain Marvel, Guardians of the Galaxy (v2 and v3), Batgirl (every non-Babs book), Ms. Marvel, Nova, Saga, and the list goes on. So. Many. Comics.

Trust me, I’m going somewhere with this. 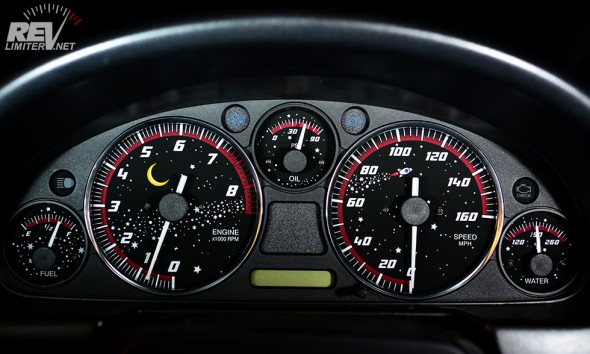 After immersing myself in comics so much, it started to seep into my gauge designs. It took a while, but slowly I tried to expand my artistic horizons. Perhaps you recall the pony gauges? I wanted more. I wanted something HARD. I took every challenging order I could get and put everything I had into it.

One of those orders was this set of Starship gauges. 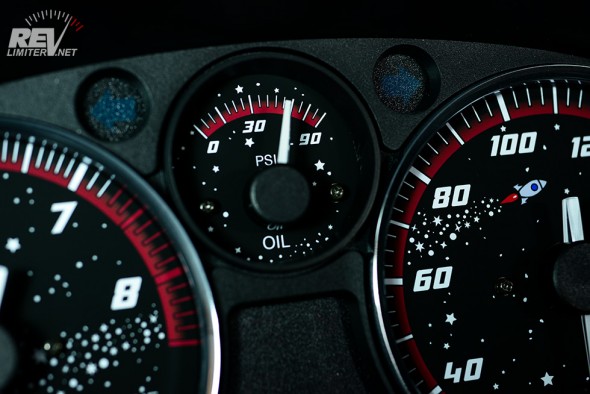 No one has ever been more proud of a tiny rocket than me. 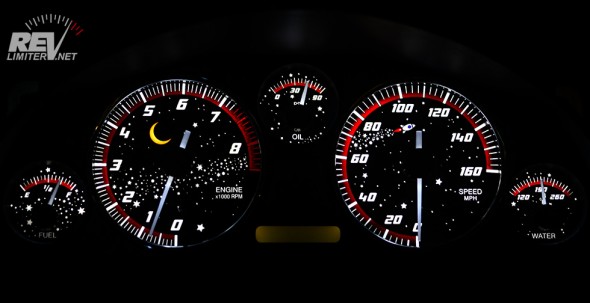 It was an order for a star-themed gauge done in the style of the late Dewa-san. The customer really liked Dewa’s Into the Blue and Blue Star gauges. And he’s not the only one – I’ve always loved these designs. When the chance came to do an homage to them, I jumped.

Instead of having a star shoot across the gauges in Dewa-san’s style, I drew this little rocket ship. Seriously, no one in the history of time has ever been more proud of a tiny rocket drawing than me. And having the stars shoot out across several gauges? I’d never done a design element like that. Months later, I’m still hugely proud of this set.

I was hooked. I wanted to do more fun gauges. 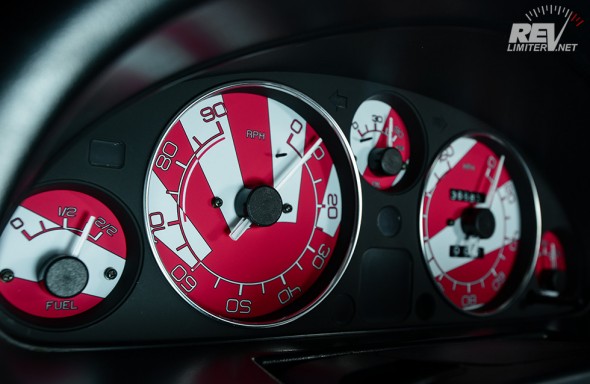 Then I got the order for these Rising Sun gauges. It’s not quite the same thing as drawing cartoon rockets, but it was incredibly challenging. I’d never juggled so many layer masks and a huge single element that stretched across the whole cluster. It was incredibly difficult. 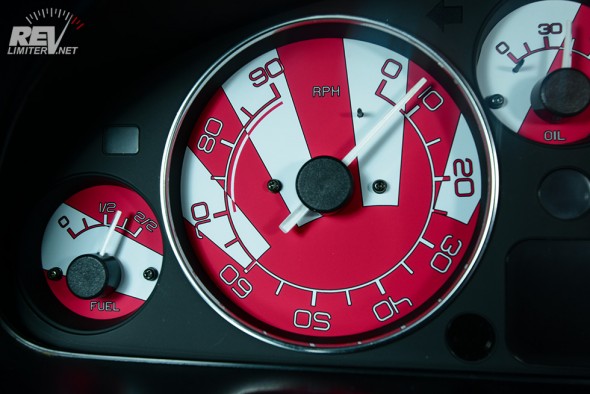 Note the intricate white/red masking on the scale and text.

A quick note about these gauges: I know the Rising Sun design offends some people. I’m very sorry about that. It’s not my intent to offend by posting them. I am just incredibly proud of my work here. They’re not intended to be a political statement or anything like that. I was commissioned to make this set and I did so. 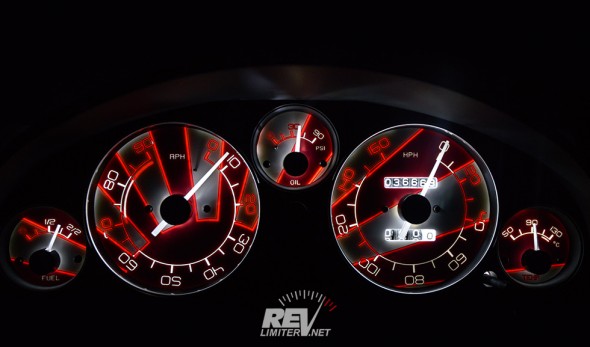 The night mode was even more challenging than the standard view in the daytime. Outlining all of the sun and ray elements and shading them to light up somewhat evenly… not easy. But SO much fun!!! They were the most technically challenging gauge set I’d ever made. 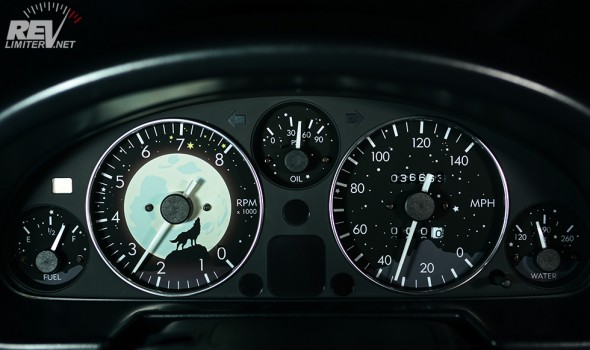 Bark at the Moon

Corey, a long-time ClubRoadster member and friend, contacted me about a set of wolf gauges. He had a small outlined logo and wanted it somehow integrated into some Warbird gauges. I worked on it for about an hour, shoved it here and there, and just couldn’t make anything work. It looked like either an un-cool teeshirt or a bad tattoo. He deserved better. I wanted to do better.

I got the idea for a wolf and moon theme. I think I mentioned “I have an idea” to poor Corey before launching into insanity mode. Version Lobo is the result. 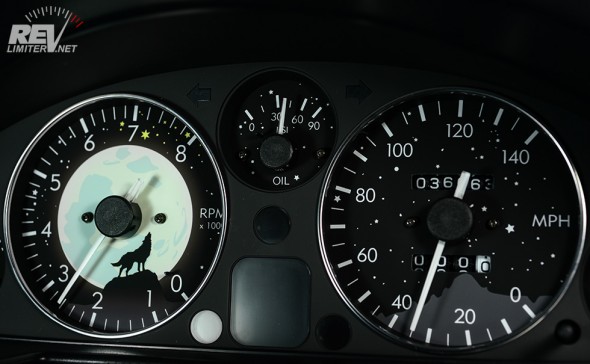 I quickly sketched up a howling wolf standing on a hill. The gold and green moon started out as a photo I took years ago. I inked over top and added a few embellishments and it was perfect. A bit of diffuse glow and gradient shading on the wolf and hill and the tach just came to life.

I then added matching landscapes to the other three lower gauges and popped some stars into the sky.

I’m all about stars lately.

When I got the gauges made up and in the pod for photos, I was… smitten. I was a fan of my own work. That’s never a good thing – like a comedian laughing at their own jokes. But, well, yeah. I love these gauges. I really wanted to keep them.

I was worried the moon would be overpowering at night, so I turned it into a crescent. I also dimmed it by 50% to keep the lit portion from being too bright. The hills aren’t visible at night. Just moon and stars. 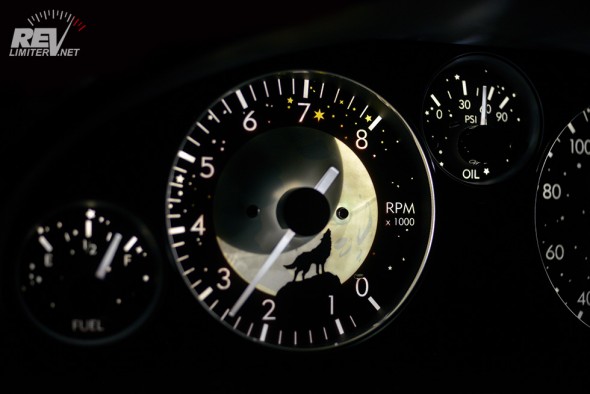 I wanted to keep these.

So. Comics. I have no other explanation. I wouldn’t have produced anything like this a year ago. Suddenly, I’ve got stars and rockets. Moons and wolves. Huge flag designs.

Who ever said reading comics was a waste of time?!

I think Sharka needs a new set of gauges.

15 Responses to “All the Custom Gauges”