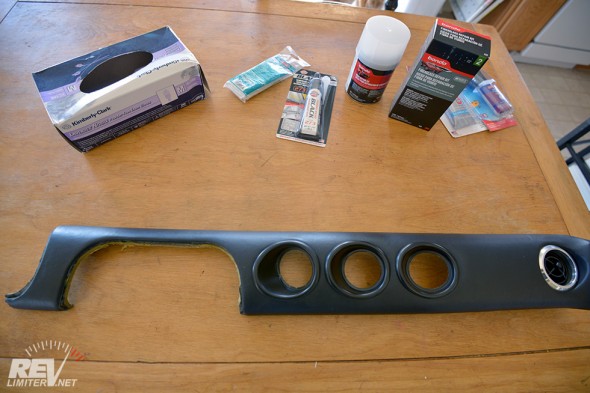 The pod is out again.

I’m insane. Everyone knows this. I try to keep it together and most days I’m successful. But rattles bring out the red eyed beast. Dear God, rattles make me crazy. And Sharka has been slowly accumulating more and more rattles. I try my best to keep them at bay, but it’s not always enough. 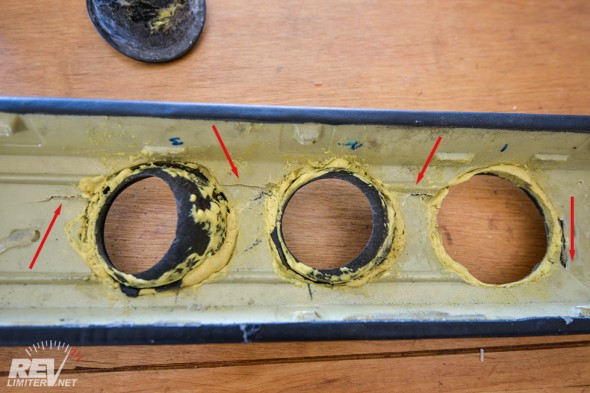 The #1 culprit was Sharka’s fancy dash gauge pod. It creaked and cracked. I could HEAR it very clearly. If we hit a bump that made things shake, I could hear the gauge pod creak as things flexed.

Removing it showed the problem. Lots of cracks. Twisting it with my hands, even just a little, produced the same creaking noise I’d heard while driving. 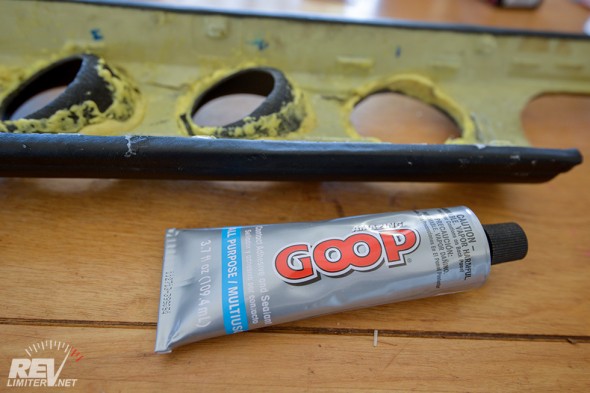 Goop. Not quite Shoe Goo but pretty good. 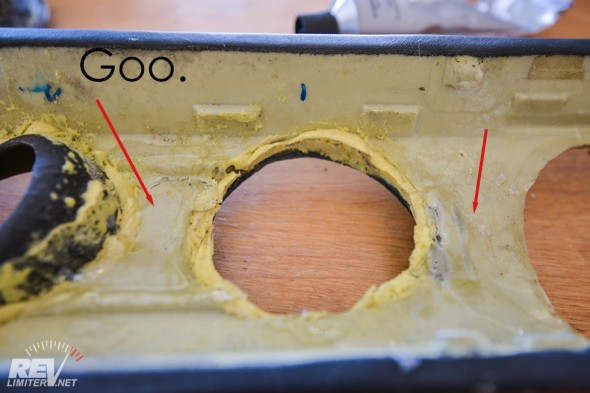 This “Goop” stuff came from a hardware store. I was looking for Shoe Goo (lovely stuff) but could only find this. It stays flexible after it cures, so I was pretty happy. And a month after applying it, I can safely report that it worked great. No more creaks. 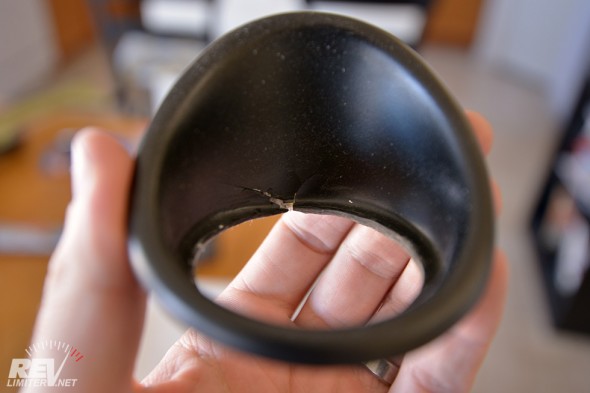 This also happened. A small crack in the boost gauge pod. It was pretty much invisible under the chrome ring, but once I had everything apart, I thought I might as well fix it.

Besides, I’d never fiberglassed anything before. 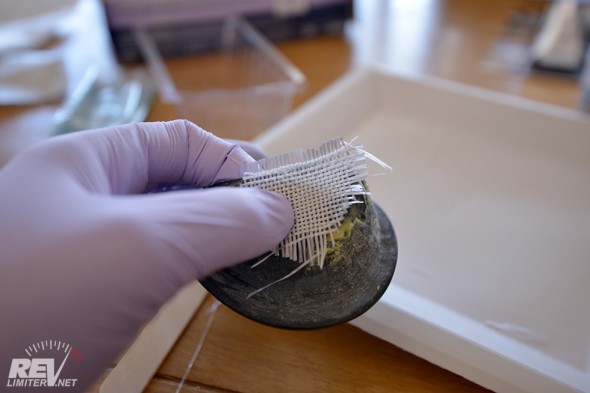 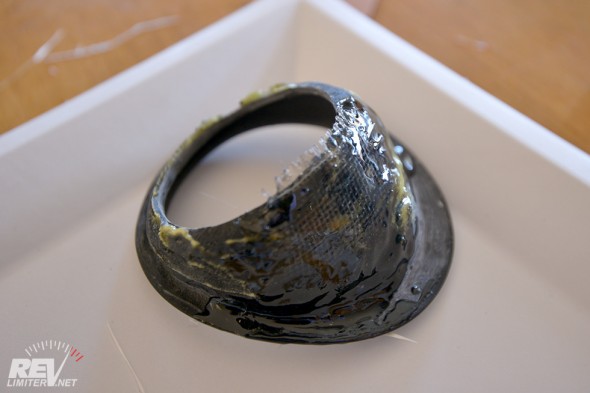 And let it harden. 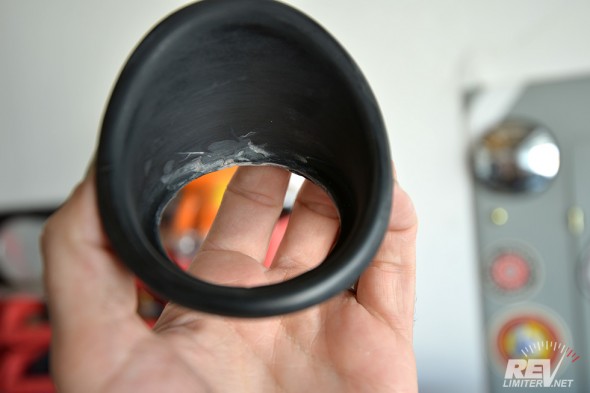 A little bondo and sanding… 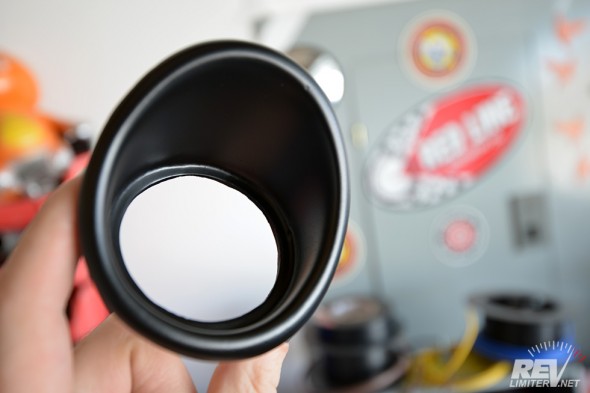 And some paint fixes it right up.

It really wasn’t much of a crack to fix. I added a tiny bit of fiberglass to the back side to strengthen it. Then I sanded it back to round with a dremel once it was cured. Then a tiny bit of bondo applied with a finger to fill the crack on the front side. And some Krylon satin black to finish it up.

Now to address the gauges… 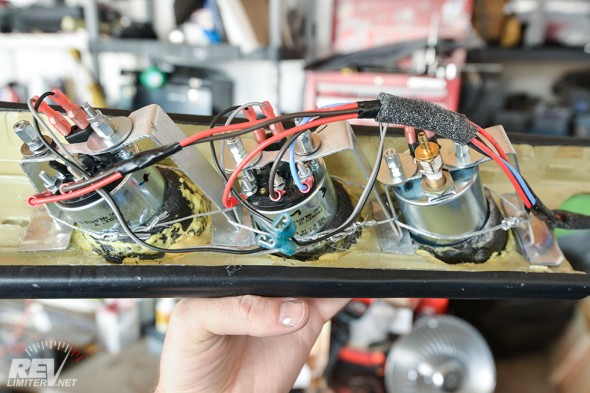 There’s a lot going on in the above image. I spent several evenings staring at the thing, trying to figure out everything that could possibly rattle.

1: The gauge mounting posts. The nuts backed off of two posts and let the flat washers rattle. With a double nut, that won’t be happening again.

2: The backing plate at the bottom of the U-clip. That will make sure the U clips don’t re-crack the plastic. They’re glued in place with a thin layer of the previously seen GOOP.

3: The safety wiring. The U-clips slid all over the place and deformed in the year or so that they were installed last. They didn’t have anything to hold them straight. Well… I fixed that. Don’t laugh at the wire. I think it’s for hanging photo frames. It was just what I had on hand.

The whole gauge pod is now incredibly rigid. Like, shockingly rigid. Pretty proud of myself actually.

It better not rattle… 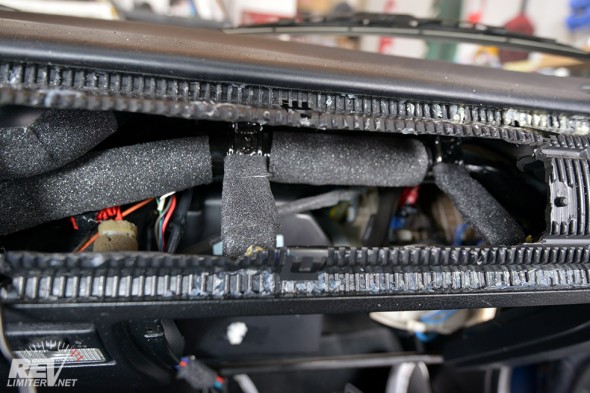 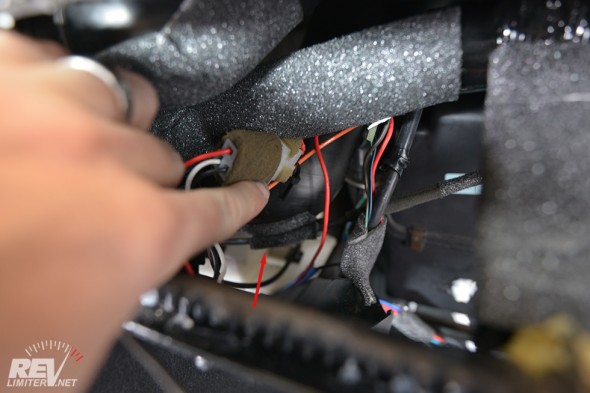 The slider cable was a rattle source. Not any more.

Before putting the crash pad back in, I spent a few hours in Sharka’s passenger seat applying foam to anything that could possibly rattle. Then I’d shake things and slam doors. Then more foam.

The HVAC slider cable (seen in the 2nd photo) rattled against the plastic ducting. Like… a lot. A bit of foam applied to both the cable and the side of the duct took care of that noise. When the glove box was up, the same cable rattled a little against it too. I ended up just coating the whole cable in foam. No more noise.

Having a huge hole in the dash made finding rattles very easy. I could just reach through and shake wires around. Pretty sweet. You know, if you’re crazy. 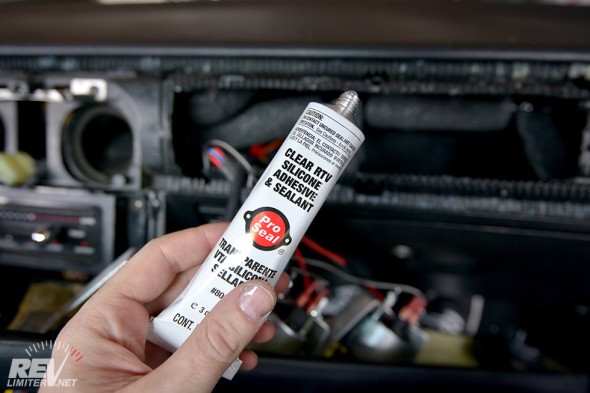 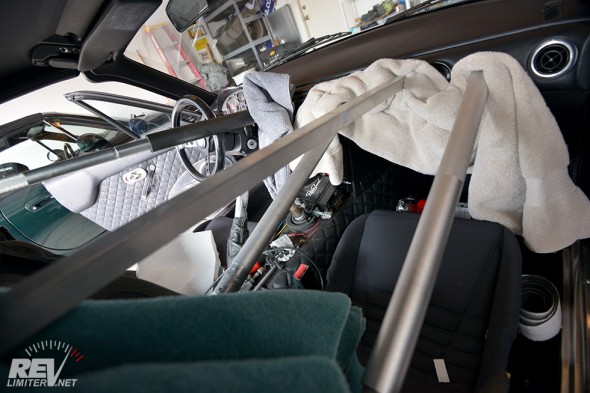 Gluing the crash pad back in place.

I didn’t take any photos of this the last time I installed the gauge pod. It’s held in with silicone from the factory, so I used the same thing. It’s a bit messy, but it works.

Wanna know how it all ended up? After ALL of this work? It was actually about 2 weeks of work… 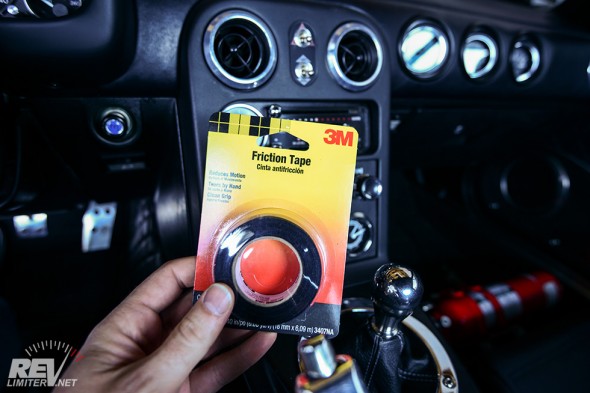 There was still one rattle. A big rattle. The main rattle. If I was driving, it sounded like it was coming from the crash pad. But if I was on the other side of the car, it was very clearly coming from the main gauges.

I was clearly going nuts.

I had two rolls of this friction tape. I had plans to coat every edge of every object in it until there were no more rattles. 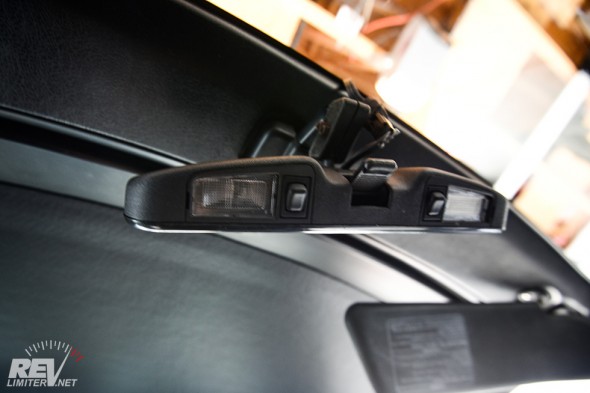 Fortunately, the rattle was easy to replicate. Just rev the engine up to 2000 and listen. So, I set my idle speed to 2000 and sat in the car moving my head all around.

If I had my head near the HVAC panel, the rattle sounded like it was right in front of me. I started to take it apart. As I turned my head to look for a tool, the rattle moved above me.

The whole goddamn mirror was shaking at 2000 rpm. 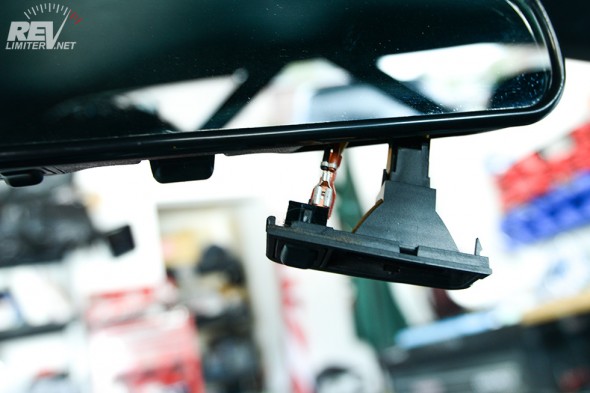 This was the rattle. 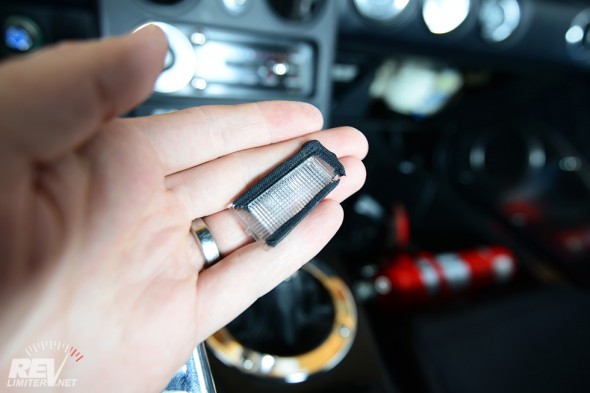 Suddenly, there was silence.

My fancy lighted mirror was the rattle. Specifically, the lens on the passenger side. When I touched it, the rattle stopped.

You guys have no idea the relief. Finding THE rattle? Oh my god. Instant relief. It felt GOOD. (yes, I clearly have mental health issues).

I taped up 3 sides with friction tape (better than gluing it in place) and stuck the lens back into the housing. No more noise. 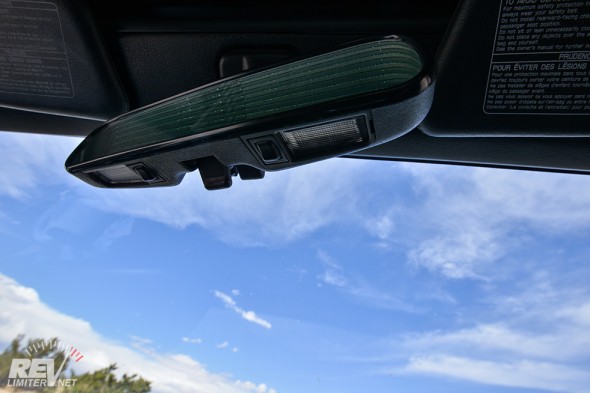 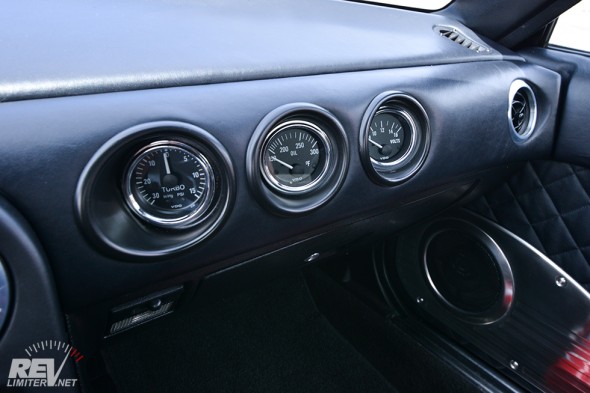 No rattles here either.

I’ve driven a couple weeks since fixing these things. I drove to the VLA and took photos. No interior rattles the whole time. At all. There’s still a few suspension rattles, but those are easy to ignore. 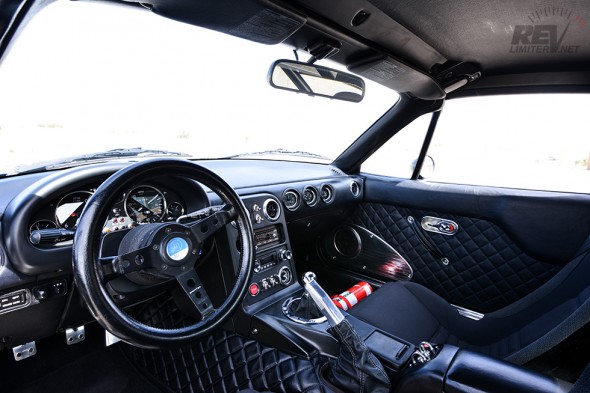 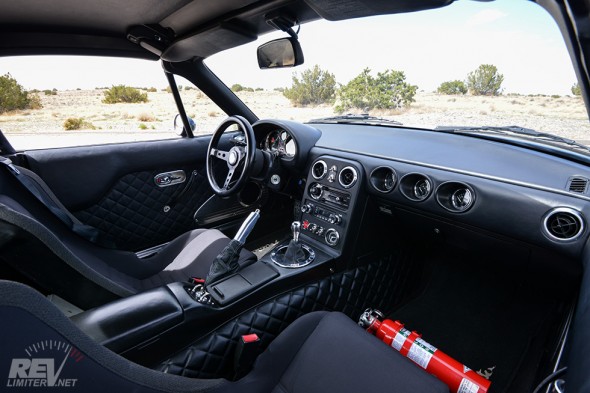 So rattle free. You have no idea.

These are some of my favorite Sharka interior photos ever. Why? No rattles.

I also did some small upgrades. 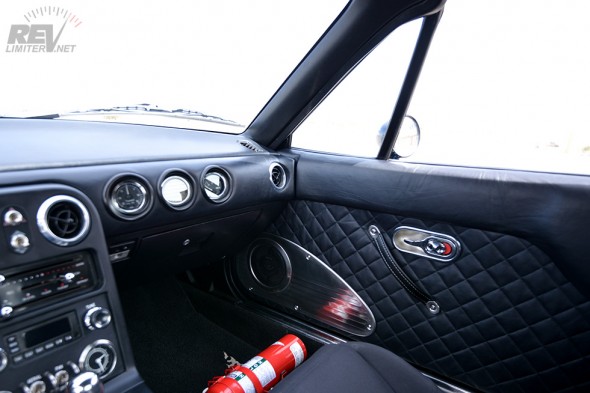 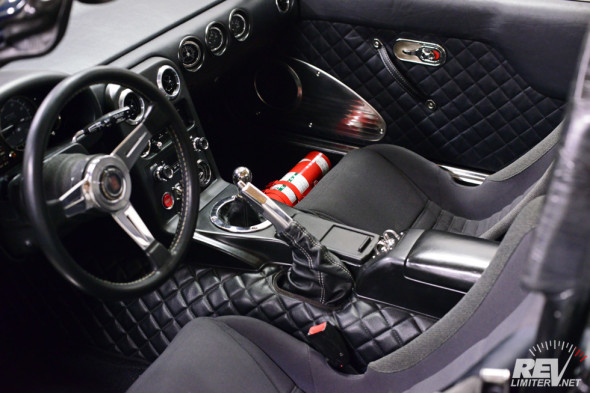 Compared to a few months ago.

The leather crash pad was installed for about a year before I did the leather door panels. During that time, it got cleaned and nourished and turned a rich black. The door tops always looked grey compared to the crash pad. So, I fixed it. A lot of leather lotion got the door tops the same rich black.

I also added a tiny upgrade. 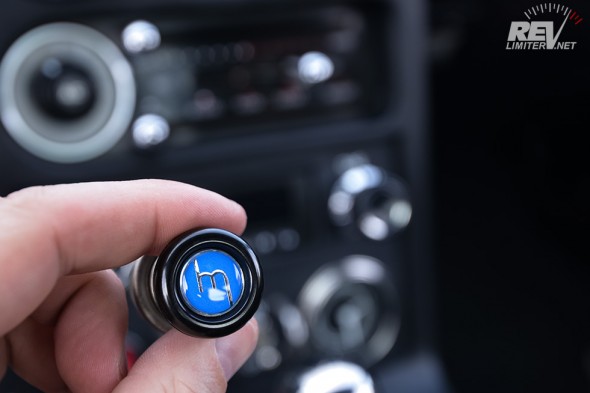 The early Miata cigarette lighters had a hollow depression on the front. It’s very small, but big enough to put a tiny domed insert into. I put a blue circle-M. It looks AWESOME. I have to admit, I didn’t come up with this myself. A buddy of mine named Jason ordered an insert for his own lighter. I just made up Sharka’s at the same time.

And no, the lighter doesn’t rattle.