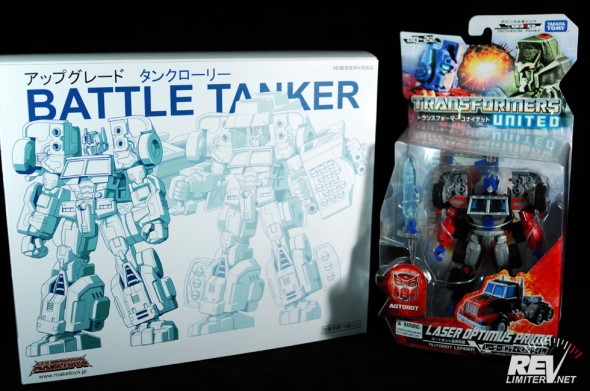 I’ve not blogged about toys for ages. Aside from some Micromachine pix, my last Transformer blog was in February of 2011. That’s WAY too long.

And this Prime is way too good not to blog about.

Big Bad Toystore recently had a sale on their 3rd party Transformer toys. (Third party is TF talk for add-ons created by folks other than Takara/Hasbro. Sometimes this is armor or weaponry. Sometimes they’re whole bots.) I snagged Battle Tanker during this sale for less than half of his original sale price. And I just happened to already own the bot that the armor would fit. 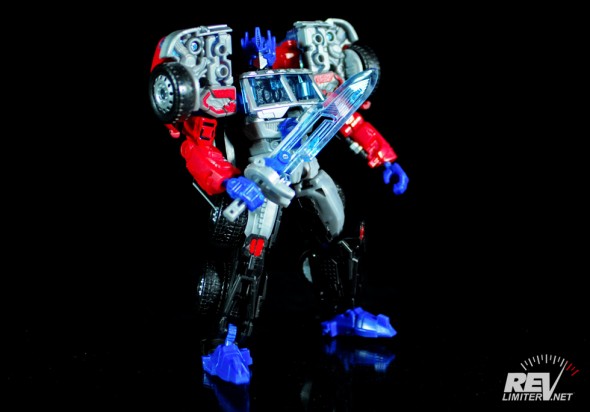 This is the Transformers United (Takara Japanese version) Laser Optimus Prime. I imported him from Japan last summer right when the Battle Tanker armor was announced. He’s sat in his plastic prison on a shelf ever since, just waiting for his armor.

This guy is based off the G2 Laser Prime toy. That toy was just a toy. It never appeared in any anime or comics. It was the first version of Prime to be strictly a toy. I think. I might have my facts wrong, but I think I’m right. I’m just typing from my fuzzy childhood memories. I was never into G2 that much. I was a G1 kid. The original G2 Laser Optimus Prime toy came out in 1995. I was starting college at that point and wasn’t much into TFs anymore.

Anyways. Back to Laser Prime. 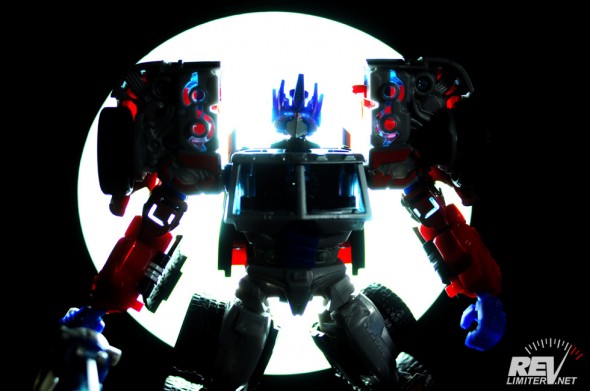 Light piping in his elbows?

This guy is funky. Funkadelic. Grand Master Funk. He has light piping everywhere – head, shoulders, and ELBOWS. Those are not just panel gaps in the elbow joints, those are clear plastic light piped pieces.

And that head sculpt. It is a face only Mommymus Prime could love. That head sculpt is the thing that kept him in the plasic shell for nearly a year. I really do not dig it. 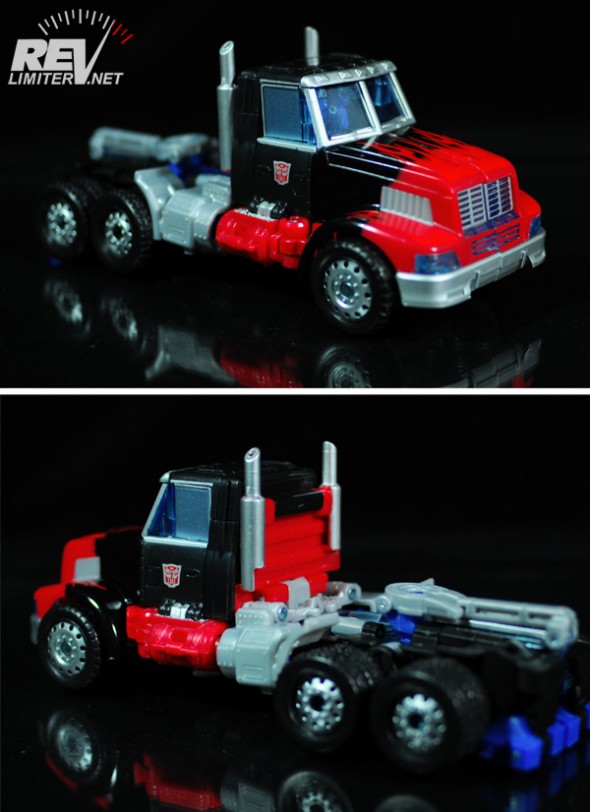 This is pretty decent. I really dig the truck mode. Black and red and some movie-era flames. I’m not a fan of the new Michael Bay movies or the Bayformer bots, but this flame job is pretty decent. A nice redeco of the red fade on the original G2 toy.

Transformation is very very fiddly. It is very much like transforming a Bayformer. Parts go everywhere. But once he’s in truck mode, he’s pretty solid. All 6 wheels touch the ground. All of them roll. The panels line up square. He’s a great platform to build something upon. 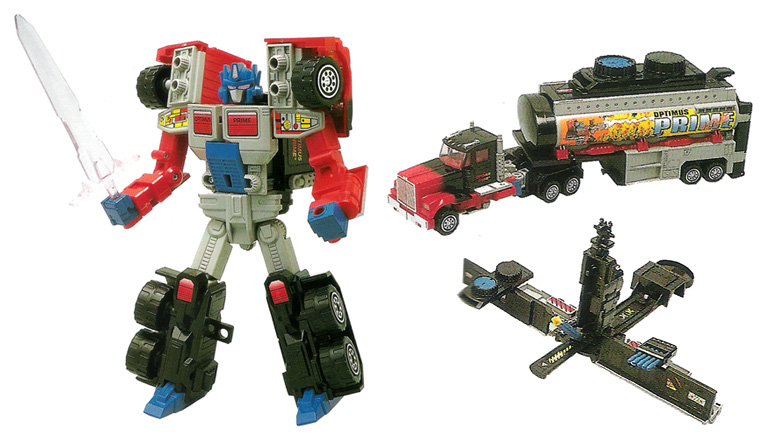 I thought I’d include a shot of the original Laser Prime. I realize most people reading my blog come here for blue an white striped Roadsters, not red and blue Autobots. Heck, I need the photo as a reference too.

Until you add armor! 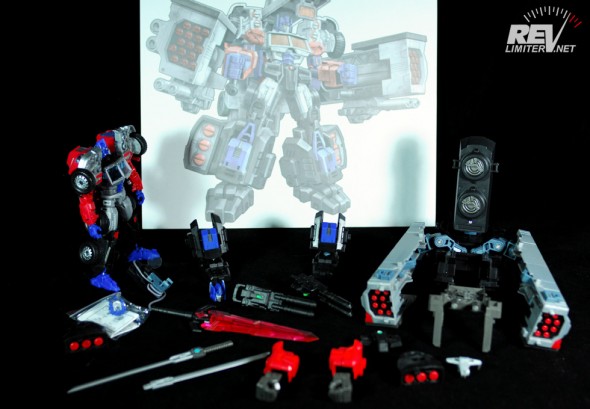 You get a TON of stuff with the Battle Tanker kit.
– 2 forearm guards
– 2 fists (gauntlets that he actually wears)
– 2 boots
– 2 rifles
– A ton of swords, some of which light up!
– 2 leg mounted missile launchers
– the big mech suit / apex armor thing
– a replacement head (can I get a woot?)
– a replacement crotch
– a spiffy belt that connects to the previously mentioned crotch
– and finally, SOUL. 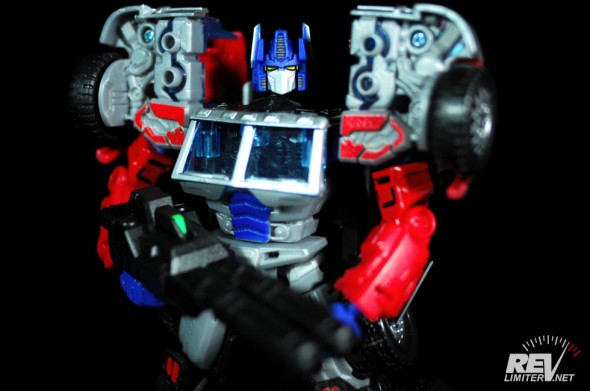 Yeah. That is Prime. THAT is my Prime. Look at that gorgeous head, those kind eyes, a proper face mask. The head is a bit oversized on the un-armored body, but damn it’s a huge improvement.

The head swaps out permanently. It’s not a helmet or something that slips over the original head. You just undo a screw and pop on the new one. Same with the crotch piece. It’s the same grey plastic as United Prime, but with 2 slots so his new belt can fit. These mods took less than 5 minutes. 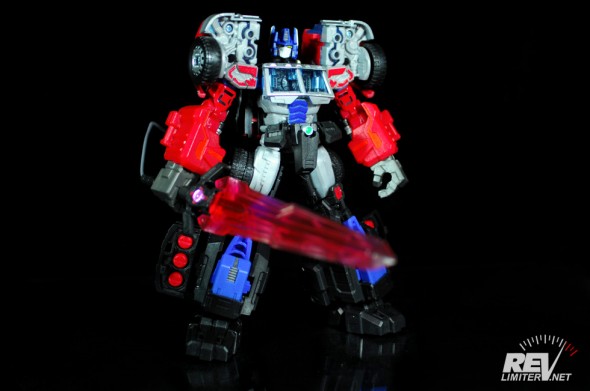 The boots fit quite well and attach with a snap. The new ankles have excellent articulation and are on very stiff balljoints. The forearm guards attach on the back with a sort of clip-on post. Then he holds the new hands in his original hands. It looks a little off from the back. Seeing a blue hand holding a grey hand holding a gun or sword? Strange. I might paint those blue hands red or grey in the future.

There’s also a small backpack with a switch and cable. They do… this! 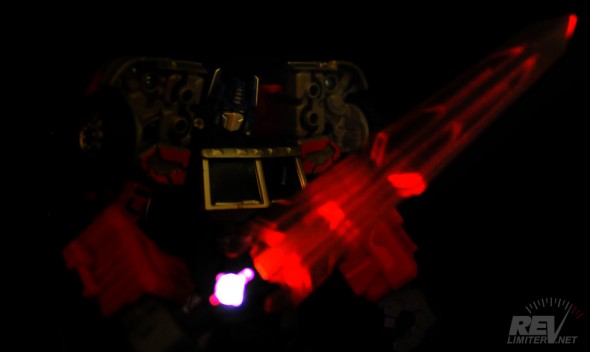 The glowing Laser Sword of Doom

It’s a very simple effect, but it looks way cool. The sword hilt lights up very brightly. The blade, not so much. But it’s a cool effect that I didn’t know existed until I opened the box. 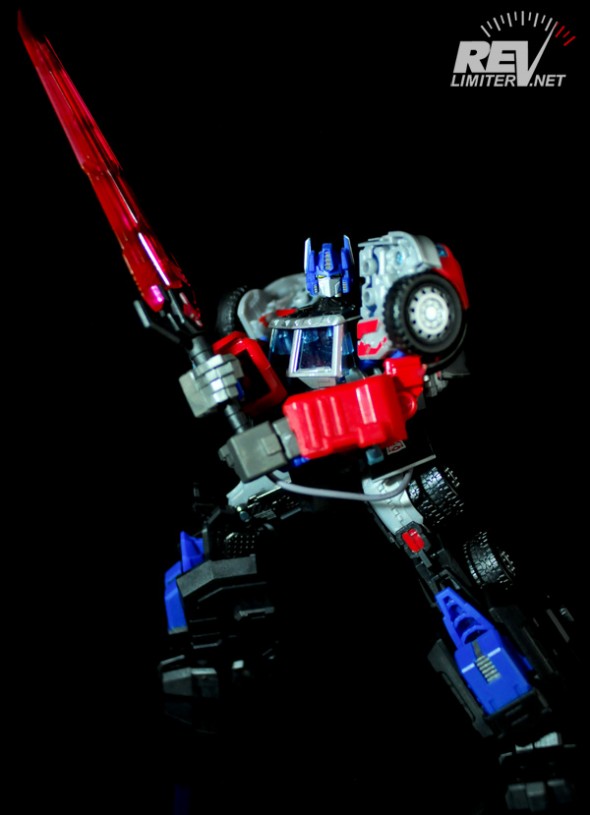 So, the #1 complaint most people have about any given TF armor kit is that it cuts back on articulation. It is big and bulky and keeps a toy from posing as well as it did in the naked, unarmored form.

This armor is the exact opposite.

If anything, he has a greater range of poses available due to those outstanding new feet and ankles. The forearm armor doesn’t stop him from doing some cool sword moves either. I mean, he can hold the thing with two hands in a natural pose. That doesn’t sound like much, but trust me – it’s the world. 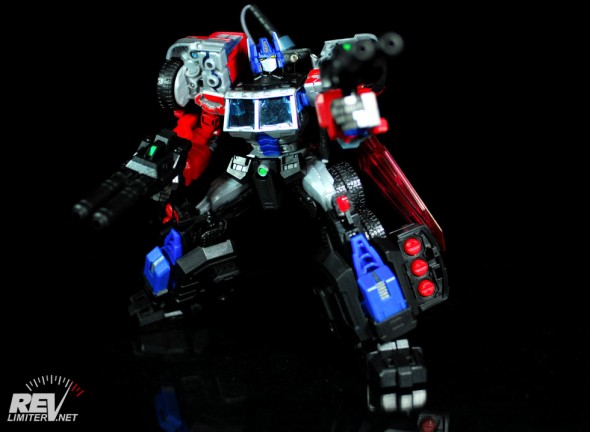 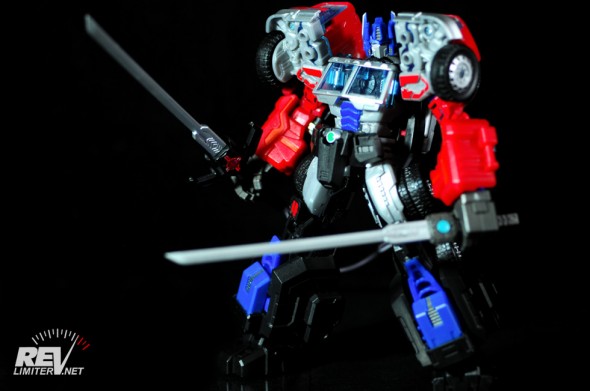 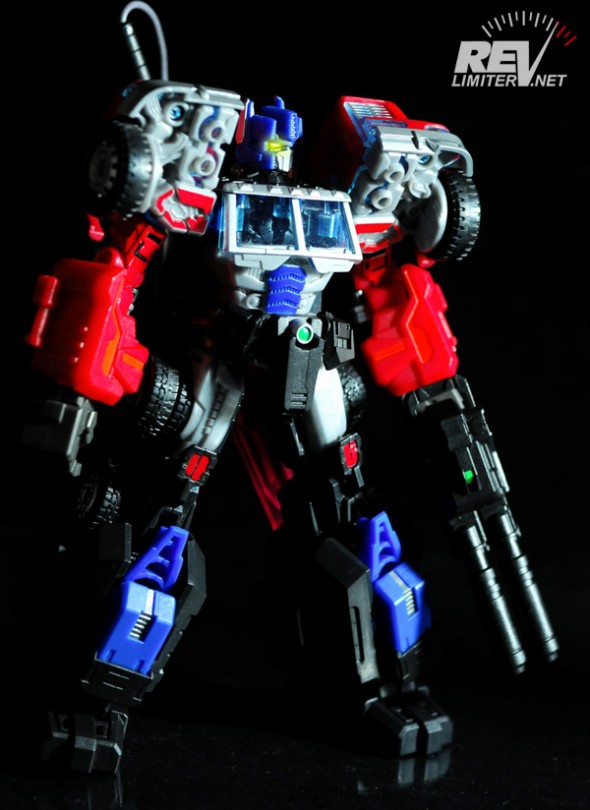 Protector of us all 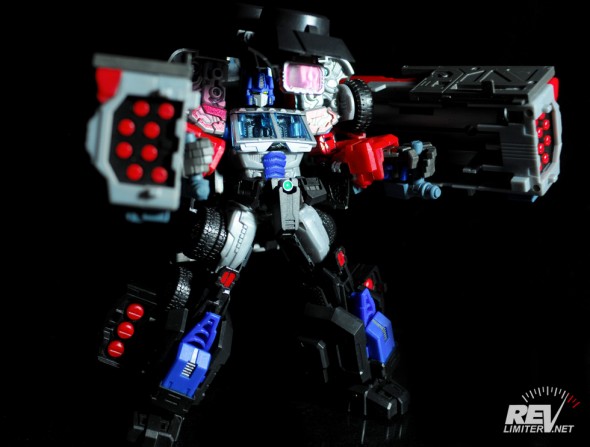 I feel sorry for those poor Decepticons... 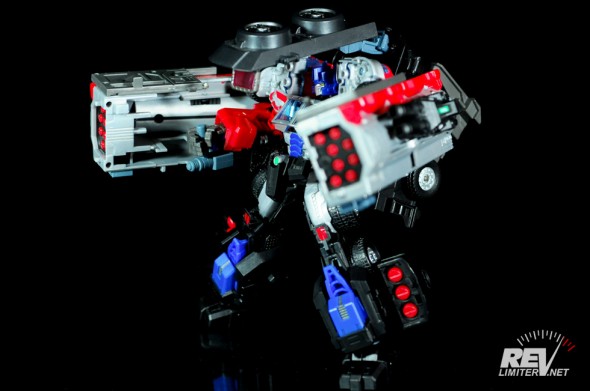 The very definition of Fully Armored.

I’m not sure what to call this mode. In the recent Megatron Origins comics, Seninel Prime wore something similar that was called Apex Armor. So, I’m calling this stuff by that name as well.

And holy crap. THAT is some armor. It mounts to his back sorta like the small backpack that powers the sword does. It has an extension stand built in that lets the pack come down and balance on a third point if Prime’s two legs aren’t strong enough to hold it. But, as you can see, that’s not needed. He balances very well in this armor.

Articulation IS greatly restricted. He can raise and lower each missile launcher about 20 degrees while holding them. You can take them out of his hands for some decent poses, but… well… I like this pose. My Laser Prime will not spend much time with this crazy attack force strapped to his back. I got the kit for the regular armored version. But it’s a great piece. Better than the badly shaped gun that most of my 3rd Party Ultra Magnus armor turns into. 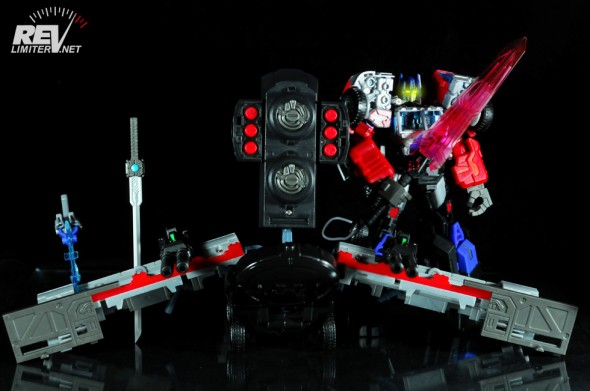 Like the original toy, the tanker section can form a sort of base. There’s quite a few different configurations you an put it into. I figured out this setup and rather liked it.

There aren’t any instructions for building the base mode. You have to fiddle with the tanker and figure it out for yourself. 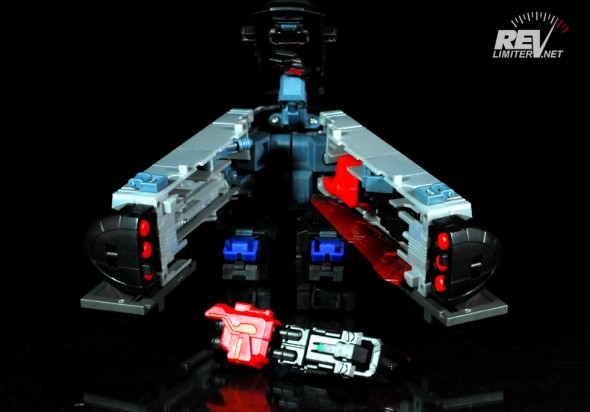 Everything in its place

Everything comes off and you transform Prime normally. All of the extra parts go in the tanker. This is a rather Gundam way of transforming him. A lot of fans seem turned off by this. Some call it Partsforming vs Transforming. But really, it’s not that bad.

The way of forcing everything into the small cylinder is quite clever. The forearms wrap around the guns. The belt and fists go on the back to make a bumper. The boots go on the bottom wheel wells. All the swords fit inside. Very very cool and well designed. 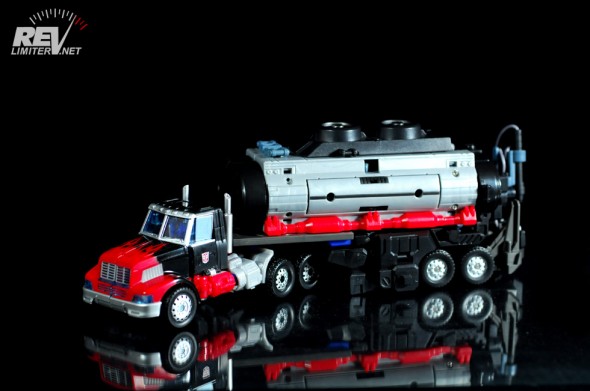 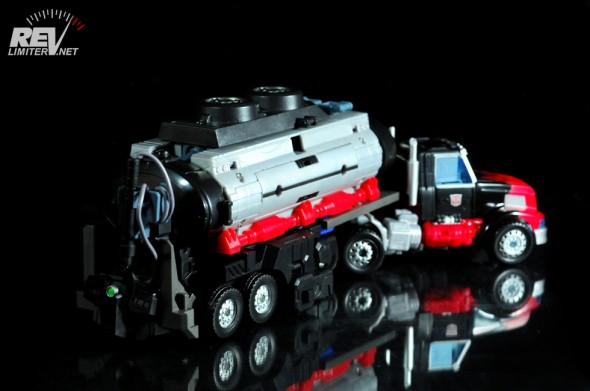 Again – really nice. All of the wheels touch the ground and roll. The tanker pivots on the attachment point. The plastic matches perfectly. And it’s a great re-deco of the G2 toy. 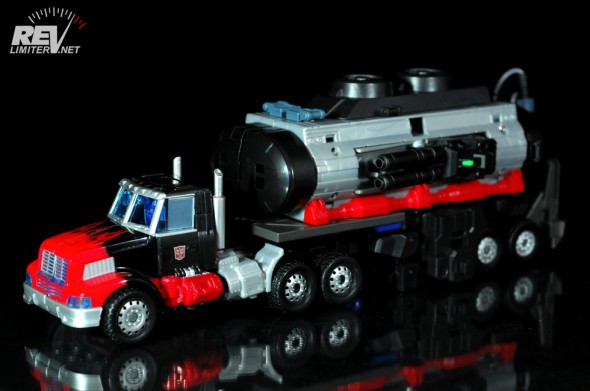 I love this mode. Big cannons coming out the side? LOVE it. The only problem is that they don’t just swing out like you’d expect. You have to open it up and fiddle with the guns and remove the forearm guards and swing things around and reattach the guns and close it all up. But it looks fantastic once you’re done with all of that. 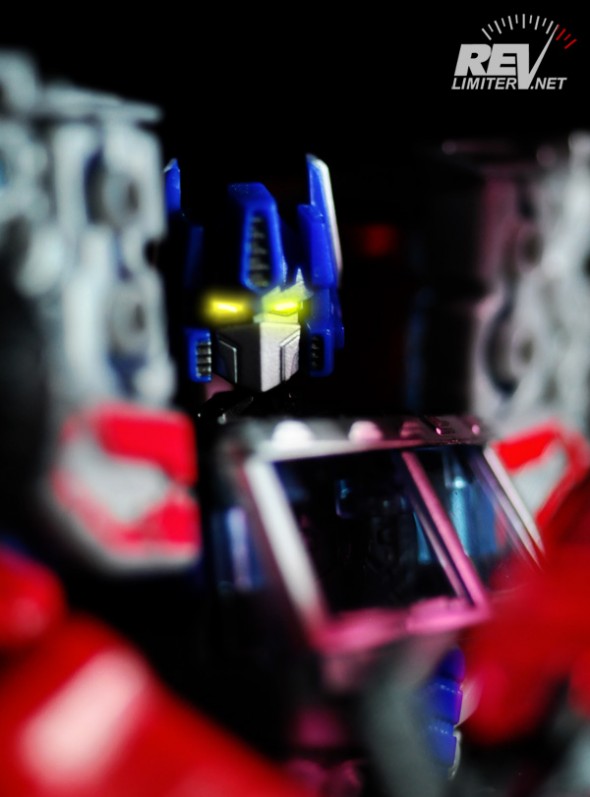 Till All Are One.

This is the one thing I’ve not mentioned – soul. This bot has it. From every angle, in every pose, soul drips and oozes from this Prime. I’ve not seen so much soul out of an Optimus Prime toy since opening up my Revoltech Prime about 5 years ago. He is a brilliant toy of my favorite Transformers character.

Needless to say, I’d recommend this set to any TF collector or Optimus Prime fan. No need to find the now-expensive TF United version of Prime. The Hasbro version looks fine in this armor too. And what an armor set it is…